Breaking
ESBC Major Updates: Tons Of Heavyweight Greats Added...
How to Run Nonprofit Marketing Ads
Entrepreneurs Are Bringing Transparency To Home Buying And...
Best Incentive To Get Vaccinated: Money, Messaging, Or...
Page Level Query Analysis at Scale with Google...
How A CIO Can Align IT With Business...
Blogger of the Month: Jo, Girl Eats World
6 Things Women In Business Know That Men...
How to Use First-Party Data for Ad Personalization
Pressing Reset—Putting A Fallen Unicorn Back On Its...
How We Went Viral: Promoting Content with Influencers,...
Blame Olympic Record Price Tag For Return To...
Apple iOS 14.5 Release: Should You Upgrade?
How to Come up with Podcast Topics and...
Why Gaming Gear Company Razer Launched A $50...
Technical SEO Implementations to Increase the Impact of...
Home Business New Orleans Pelicans, David Griffin Have 3 Options After Response To Jrue Holiday Trade Rumors
Business 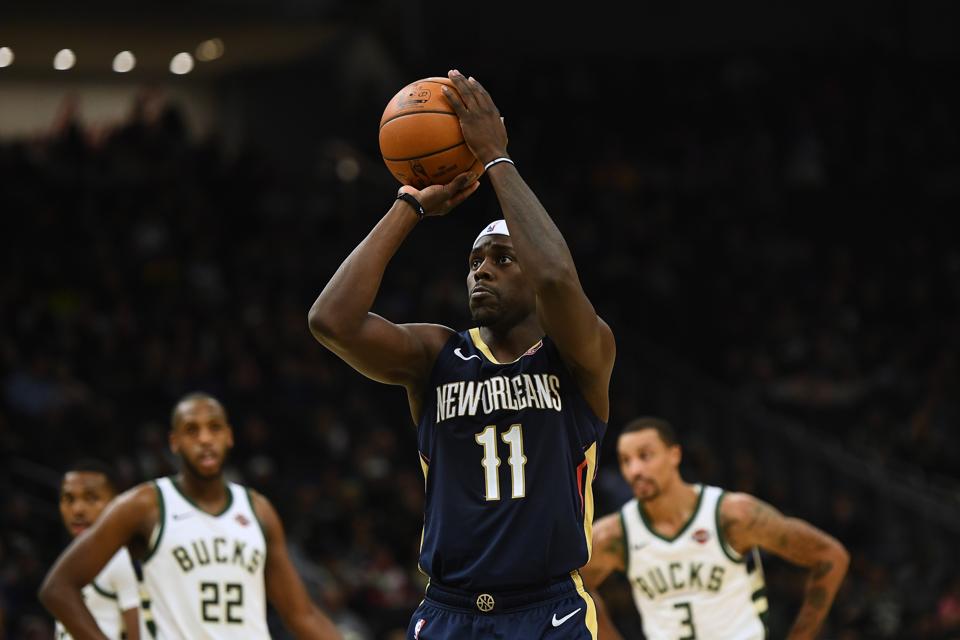 MILWAUKEE, WISCONSIN – DECEMBER 11: Jrue Holiday #11 of the New Orleans Pelicans shoots a free … [+] throw during the second half of a game against the Milwaukee Bucks at Fiserv Forum on December 11, 2019 in Milwaukee, Wisconsin. NOTE TO USER: User expressly acknowledges and agrees that, by downloading and or using this photograph, User is consenting to the terms and conditions of the Getty Images License Agreement. (Photo by Stacy Revere/Getty Images)

David Griffin said during an in-game interview that he and Jrue Holiday had a conversation about the imminent trade rumors after December 15. They laughed once the stories were published. Griffin had an immediate public response but he knows this is no laughing matter. The New Orleans Pelicans are in the same tough spot of having pressure to move a star player.

There are several reports that Jrue Holiday is on the NBA trade block. Griffin replied emphatically to those reports stating, “So, this is one of these things that’s crazy about this time of year because you can clock when these conversations are going to happen. So, December 15th just passed which is when everyone that signed as a free agent can be traded. So teams that would hope to acquire something from a team like ours, that’s really struggling to win games, is looking at us as a target. Absolutely nothing has changed at all in our approach to this situation or to the season.

Everyone wants to believe that Jrue (Holiday), JJ (Redick), or Fave (Derrick Favors) would be available because we are not winning, and that’s natural. But, the reality is nothing has changed our position at all. I think back quite often to the fact that when we were in Cleveland, everybody knew we were a buyer, so everybody said we were interested in people. People identify us as a seller now because of our results, and nothing factual has taken place at all.”

He continued about the trade rumor situation saying, “So this is funny actually. The irony in this is pretty funny. I was with Jrue (Holiday) yesterday. We had a conversation, and I explained exactly what I just said to you all about December 15th. I said, ‘I can write it down in blood that there will be a story that we should trade you or are trying to trade you.’ It just so happened that it came the very next day, so we actually laughed about it.”

Griffin replied, “Clearly not, no” when asked if he was trying to trade Jrue Holiday. He said the team still felt the same as it did before Zion Williamson had surgery. This roster, when healthy, can dominate the schedule. There is no rush to trade Holiday, same as there is no rush to get Williamson on the court before he is ready. However, Griffin did not say he would decline all offers.

Getting proper value for what Holiday means to the Pelicans will be close to impossible. New Orleans cannot trade Holiday for an expiring deal or a bloated contract with multiple draft assets. Neither of those options helps Zion Williamson compete for the playoffs any time soon, if ever. If appeasing disappointed fans is a factor, any trade that nets the team dimes on the dollar could cause a Mardi Gras-styled mutiny.

New Orleans cannot effectively use Holiday as a salary dump to shed a couple of mid-level contracts. The Pelicans need a younger version of what Holiday represents: a borderline All-Star player who could raise his game to NBA MVP levels on occasion. Griffin hyped Holiday’s MVP credentials this offseason, declaring he gave Holiday ‘permission to dominate’ this year.

There are not many available players that fit that description. New Orleans may need to include a third team in the deal to gain more rookie deal projects along with a headliner contract. That scenario would create different cap sheet headaches for Griffin for years.

The Ringer suggested Holiday to the Miami Heat. The Minnesota Timberwolves could offer Andrew Wiggins in a straight swap, or a package to pair Holiday and Wiggins with Karl Anthony-Towns. Several other teams have been mentioned, suggesting a bidding war will develop before the trade deadline. Depending on the return, Nickeil Alexander-Walker would stand to benefit most if Holiday is traded. Any trade would surely signal a total commitment to the Pelicans’ youth movement.

Now that Griffin has made such a clear statement regarding Holiday, any move in the next two months would have to be a landslide trade negotiation win. Anything less and Griffin would ruin his reputation with the fanbase. Holiday is beloved and Griffin told the world about their understanding of the situation. No one would understand if Griffin sent Holiday packing for spare parts, cap space, and draft considerations.

Therefore, the Pelicans have only three options. They can remain patient and keep Holiday until the team is fully healthy. That is the stated goal. New Orleans can be overwhelmed with a trade offer and regrettfully but understandably part ways. Most fans would be happy to see Holiday head to a contender. The third option would create a toxic situation through a terribly timed trade. Griffin knows to avoid that and he said so during the game broadcast.

Cost Considerations Drive The Merger Of Fiat Chrysler And PSA