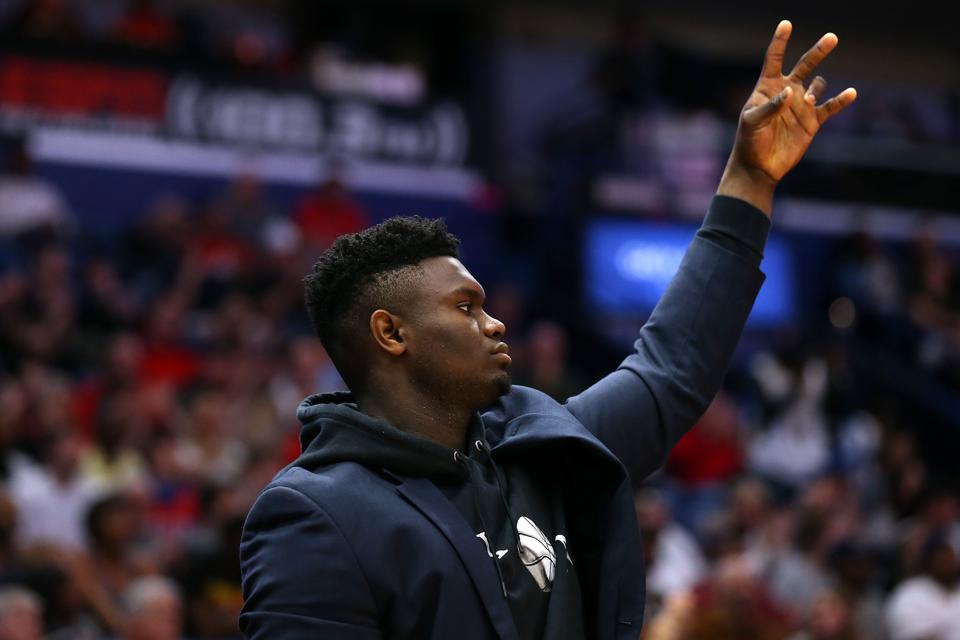 NEW ORLEANS, LOUISIANA – JANUARY 18: Zion Williamson #1 of the New Orleans Pelicans reacts against … [+] the LA Clippers during a game at the Smoothie King Center on January 18, 2020 in New Orleans, Louisiana. NOTE TO USER: User expressly acknowledges and agrees that, by downloading and or using this Photograph, user is consenting to the terms and conditions of the Getty Images License Agreement. (Photo by Jonathan Bachman/Getty Images)

The New Orleans Pelicans are 11-5 in their last 16 games. The team is playing the best basketball seen in the Smoothie King Center since the Portland Trail Blazers visited for a couple of playoff games years ago. Now, 44 games into the 2019-20 NBA season, the New Orleans Pelicans will welcome Zion Williamson back into the team’s rotation. Williamson will likely be in the starting lineup when the San Antonio Spurs visit for the most anticipated sporting debut of the decade.

While the New Orleans Pelicans are playing great recently, they are still a few games out of a playoff spot. The story is well known. Williamson had surgery on October 21 and unfortunately, mounting injuries throughout the team have forced Alvin Gentry to shuffle rotations while piling up losses. The team’s most common starting lineup has contested the tip together only four times. New Orleans has used 18 different starting lineups.

Finally, except for in back-to-back gameday situations, it is expected the starting five planned in October will finally take the court together regularly. The team is getting healthy but now needs to help it’s self in a big way to leap into the eighth seed. With four teams between them and the playoffs, backing into the playoffs is not an option. New Orleans will have to take matters into their own hands.

One way Williamson will help is grabbing more steals. Grabbing rebounds and earning more free throws will help the team win a few more games, but tightening up the defense is the main priority for a playoff push. New Orleans ranks in the back half of most every defense stat. Adding Derrick Favors fixed several issues and Williamson will solve a few more.

Through the first half of the season, New Orleans only swiped 7.3 (22nd) steals per game. The Pelicans are barely average in forcing turnovers in general and are 11th (5.2) in blocks per game. Williamson averaged 2.1 steals per game in college and 1.5 this preseason. His steals and blocks will get as many highlights as his dunks, eventually.

(Dunk highlights will get old eventually, right? No? Understood. The NBA world has waited too long to see Zion dunk in a regular season game to tire of them any time soon. Moving along in an effort to rebound from that lapse in judgement. Speaking of rebounds….)

The Pelicans are just outside of the top ten in rebounds per game (45.9). New Orleans is a top ten team regarding offensive rebounds; they chase extra possessions. They just have a problem grabbing defensive boards when Gentry trots out smaller lineups.

Now, even with a three-guard lineup, the guards can run to their spots while Williamson grabs a board and bounces out in transition. This will be hard to defend because Williamson is more than capable of running a one-man fast-break. He has some of the most refined, close control ball-handling skills for a big man already. He moves smoothly through the paint as well as the open court. Moving him into the lineup should benefit every player, buying the shooters more space while other big men get forgotten in the paint.

The Pelicans are coming out of their shooting slumber as the offense finds a rhythm. New Orleans is hitting their pace of play numbers as the fifth fastest playing team in the leage. However, New Orleans is only averaging 45.4% (18th) on all field goal attempts. Two-point shots are going in at a 51.5% (20th) clip. The team scores only 40.8% of their shots within the paint. Williamson might prove to be the best finisher at the rim in the world this season.

Damian Lillard averages 7.4 FTA per 36, good for 10th best in the NBA. New Orleans will get more free throw attempts as a team because Williamson can brute force the Pelicans into the bonus within minutes. Rim-protecting opposition will face foul trouble often unless they avoid the altercation and let Williamson have yet another highlight dunk unopposed.

Every facet of Williamson’s game looks different because it is. He is bigger, more explosive off the line and on the hop than most everyone, yet still has a delicate feel to the finished edges of his game. His finish around Rudy Gobert this preseason is just one example. His defensive anticipation shows that same basketball knowledge coming out on both ends of the court.

Williamson is now back with the team, ready to participate in regular-season games. The team said Williamson will be on a playing restriction, though it would be more about feel than a rigid minutes guided approach. The New Orleans Pelicans have 38 games remaining to evaluate the roster, barring a playoff appearance. Williamson will miss at least four games due to back-to-back situations.

The New Orleans Pelicans played one of the most difficult schedules of the NBA season so far. They’ve dealt with more games missed through injury than all but a few teams. They did not bow down to those obstacles, but rather they remained in playoff contention while cultivating a championship culture the players appreciate.

Williamson knows where everyone is on the court and is now able to join them, a process which should be seemless. He is comfortable finding his space, though he could make demands befitting a star of his stature. He oozes talent on the court and has the confidence to fill the arena. The fans are just lightbulbs lit up by his energy. Now it is time for those fans to do what Zion Williamson has wanted to do since the day he was drafted.

How To Utilize LinkedIn In 2020 To 4X Your Revenue

Three Things To Know Before Starting A Business...