Whales cruising through the ocean sometimes get snagged in fishing gear that is either in use, or left behind as old, derelict ghost gear. In recent years, increasing whale entanglements off of the California coast have prompted regulators and fishers to address the issue. In addition to shortening the season to avoid times of high whale activity and making changes to gear regulations, some private companies are trying out a new kind of gear altogether. The idea of ‘pop-up’ technology has emerged as one way to keep dangerous lines out of the water and away from unsuspecting wildlife. These technologies are still overcoming some challenges but are currently in use in Australia.

Step-by-step depiction of a pop-up, or ‘ropeless’ system. Buoys and rope are contained within a bag … [+] that is attached to the trap. The bag contains an acoustic transmitter that can be communicated to by the fishing vessel. When a signal is activated, the buoys are released from the bag, and come to the surface. This allows fishers to then retrieve the trap.

With new technology emerging, regulations must also reflect these changes. A program currently being developed by the California Department of Fish and Wildlife called R.A.M.P (the Risk Assessment Mitigation Program), seeks to prevent entanglement of marine life by creating regulations that balance the needs of fishers with the movement and behavior of whales. Pop-up technology is being tested as one possible method to keep whales safe.

Traditional crab and lobster traps (called ‘pots’) lie on the ocean floor attached by ropes to surface buoys, these ropes leading to the surface are called vertical lines. Buoys alert fishers to pot locations and also serve to identify one fisher’s pots from another’s. Once deployed, crabs or lobsters crawl inside and fishers pull the traps up one by one, re-bait them and throw them back overboard. The lines and buoys remain in the water when the fisher is not present, creating a hazard for marine life. 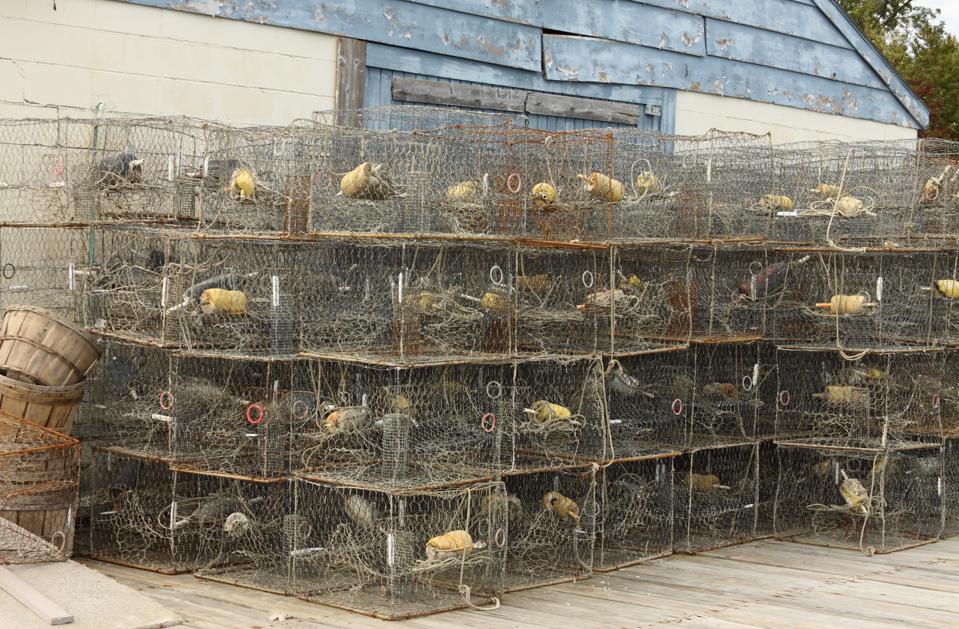 Crab pots stacked for storage at the end of the fishing season.

‘Pop-up’ fishing technologies, also called ‘ropeless’ technologies, eliminate vertical lines and buoys that are so dangerous to whales and turtles. “In 2021, that fishery is set to use ropeless fishing as the preferred method of fishing,” says Tyler McKinney, sales and marketing manager at the California-based, ocean technology company Desert Star Systems. 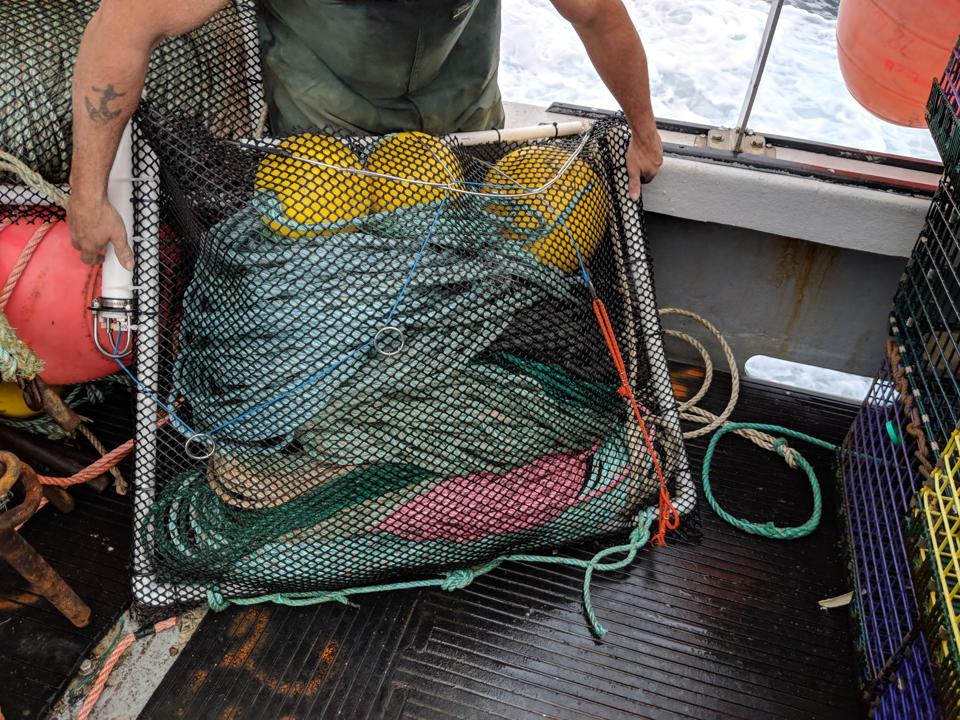 Acoustic pop-up fishing technology from one manufacturer in California. An acoustic signal releases … [+] buoys trapped inside a bag attached to the pot. The buoys bring the rope to the surface where fishers can retrieve it.

Utilizing acoustic release technology, a sound signal is sent from the boat down to the pot with a push of a button. The pots are tethered to a bag containing rope and buoys, which are released from the bag when the signal is given. Once the buoys breach the surface, fishers can retrieve their pots by pulling in the line. Boats can use the technology to determine location of cages as well. When the pots are not actively being fished, they are on the seafloor, with no ropes or buoys leading to the surface, and therefore no entanglement concern for passing marine life. 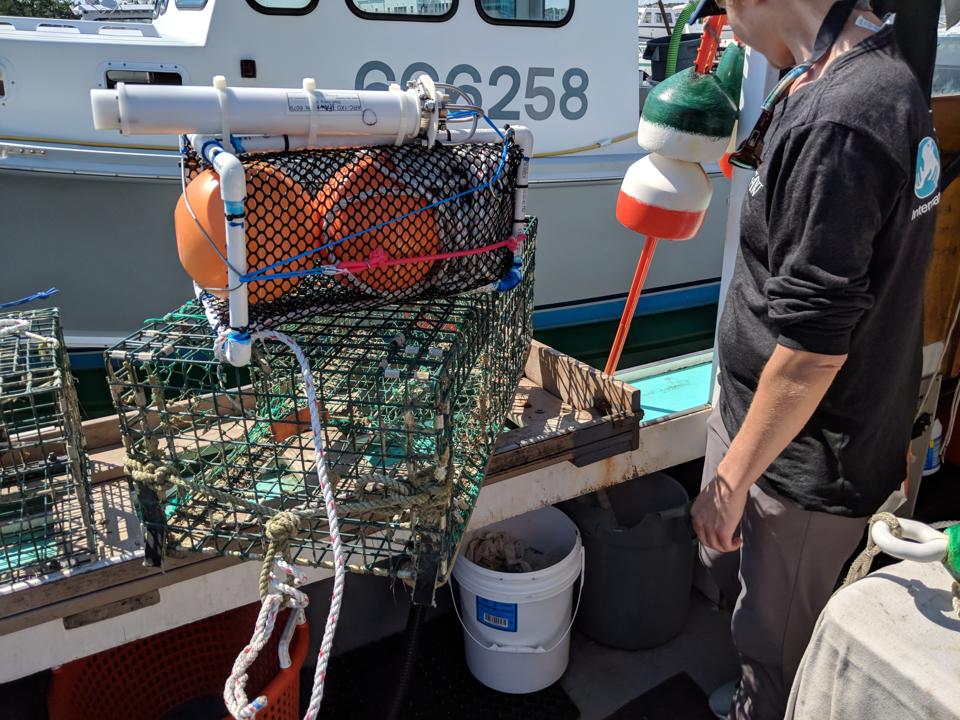 Desert Star acoustic release technology shown here has a lobster pot attached to a rope and buoys … [+] inside a mesh bag. The pot and rope/buoys will be dropped together to the seafloor until the boat signals for the release of the buoys and rope.

The concern for poaching is removed as well. Poachers can easily locate, pull and empty traditional pots, but since acoustic release pots only come when called, they are far out of the reach of poachers.

Challenges to the pop-up fishing technology

Although pop-up gear is gaining traction abroad, not everyone in California is convinced of its merits; “It’s cost prohibitive, and while some of the technologies are well-developed, the reliability is something some of the innovators are still working on,” Ryan Bartling, senior scientist at CDFW explains. One challenge fishers see is the length of time it takes to pull up, empty, and redeploy a traditional trap versus one that is ropeless.

Dick Ogg, a commercial fisherman in Bodega Bay, tested out two of the pop-up technologies, and only one came back up, “so I lost a pot right away”. Marco Flagg, CEO of Desert Star Systems, explains that if the signal fails, fishers can still retrieve their gear; “the release has a ranging function, and so the fisher will know where it is even if the buoy didn’t pop up”. Due to the practical aspects of fishing technology, Ogg believes there’s still a long way to go before pop-up technologies are feasible for fishermen. “At this point, there is nothing that is viable for the fishery”. Ogg has 350 crab pots in the water at any given time, each one takes him less than a minute to pull, empty, rebait and throw back over. He is concerned that with the pop-up technology, which currently takes 1-2 minutes longer per pot, his work day would be longer without an increase in income. In order for fishers to jump on board with the new technology, companies must be able to match the pace of fishing that they are currently able achieve. Gear demo days allow fishers and technology innovators to work together to address these concerns, and the technology is constantly evolving.

How Robots And Drones Are Helping To Fight...