Breaking
The Ultimate Guide to Saving Money
Lights, Camera, Action—Is There A Post-Covid Future For...
7 Ways to Reduce Human Errors in Your...
How ‘Couples Therapy’ Used Technology To Cope With...
Can You Settle Your Student Loans Or Negotiate...
How to Use Amazon Attribution For Ad Campaigns
What are the Makings of a High-Quality Link?
How To Quickly Start And Scale Your Business
Terra Virtua: What NFTs Can Teach Us About...
5 Easy Steps To Prepare Content For E-A-T...
Physical Inactivity Linked To More Severe Covid-19 Infection...
The 2021 Estimated Tax Dilemma: What Tax-Return Pros...
Want To Digitally Transform Your Business? Start With...
How to Optimize Google My Business and Leverage...
Debunking Link Building Myths in 2021
How, When And Where You Can Gaze At...
Home Technology New Soft Robot Hands Can ‘Sweat’ To Lower Temperature
Technology

We rely on sweating to cool our bodies when temperatures rise. Its a basic principle of physiology.

But imagine a robot “sweating”? 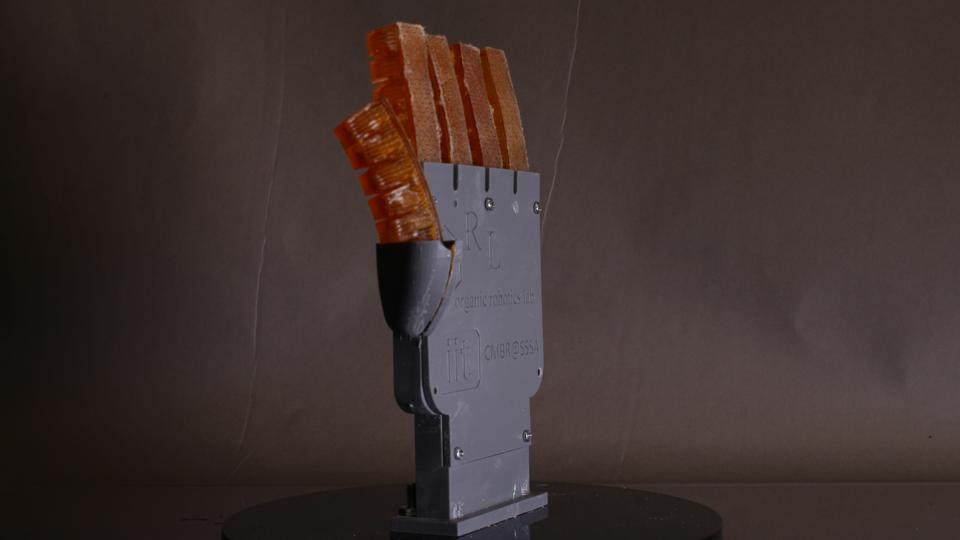 Scientists at Cornell’s School of Engineering have done just that, by creating the world’s first soft robotic muscle, so to speak, with the ability to autonomously regulate its internal temperature. Even better, its 3-D printed.

It’s possible as a result of novel, pliable, and life-like material technologies that has led to a new generation of robots, now referred to as soft robots. These soft robots are constructed using materials with more human-like features and properties, in the shape of the human hand with fingers to complete tasks.

The researchers’ approach and motivation was to develop an approach to internally cool robot components (hands) using liquids, as opposed to bulky fans with motors.

Their research was published yesterday in Science Robotics.

One of the major challenges in designing and building durable, pliable and resilient robots is regulating their internal temperature, according to Robert F. Shepherd, Associate Professor, Sibley School of Mechanical and Aerospace Engineering, Cornell University and senior author in a press release. In a nutshell, if the robot’s engines overheat, it will not be able to function.

This becomes more of an issue for soft robots, since they are composed of synthetic materials. But while they are more flexible, they also retain heat as opposed to metals, which easily dissipate heat. Using fans as an approach would be too bulky, adding weight and occupying significant space in terms of design.

So, in their search for an approach to lower temperature, they looked to natural cooling systems in mammals—sweating—as a way to cool soft robots.

“The ability to perspire is one of the most remarkable features of humans,” said co-lead author T.J. Wallin, a research scientist at Facebook Reality Labs. “Sweating takes advantage of evaporated water loss to rapidly dissipate heat and can cool below the ambient environmental temperature. … So as is often the case, biology provided an excellent guide for us as engineers.”

The research team designed fingers for the robotic-like hand using hydrogel materials that have the ability to retain water and also respond to temperature changes, basically functioning like “smart” sponges.

The base layer (poly-N-isopropylacrylamide) is able to adapt to temperatures above 30 C (86 F) by shrinking, effectively pushing or squeezing water upwards to a top layer of polyacrylamide that is perforated with micron-sized pores. These pores react and are calibrated to the same temperature range and spontaneously dilate to release water or “sweat,” then close when the temperature drops below 30 C.

Subsequent evaporation of this water reduces the surface temperature of the “fingers” by 21 C within 30 seconds, according to measurements by the researchers, making this a cooling process is nearly 3 times more efficient than in humans.

“The best part of this synthetic strategy is that the thermal regulatory performance is based in the material itself,” said Wallin. “We did not need to have sensors or other components to control the sweating rate. When the local temperature rose above the transition, the pores would simply open and close on their own.”

The researchers also demonstrated that such autonomous sweating was able to cool the robotic fingers, but also as well as the temperature of the entire apparatus as well. The potential for the sweat or water to make the robot’s hand slippery was balanced by upgrades in the hydrogel texture to improve grip, almost akin to building wrinkles into skin.

Potential drawbacks of this technology could include a reduction in a robot’s mobility, but also a need for the robots to restore their own water supply. This could potentially lead to development of soft robots which could sweat like mammals, but also “drink” or take in water from an outside source.

If such robots can sweat, the researchers further envision their future ability to also absorb nutrients, helping to drive chemical reactions, internally repair themselves (via nanotechnology), allowing them to develop an external protective “layer”.

So, don’t be alarmed in the future if your robot has a sweaty hand—it’s just controlling its internal temperature, and not a sign of being anxious or nervous!

Tech Workers In London Are The New Generation Rent

Fixing The Problem Of Food Waste Requires Partners, Not Just A Product