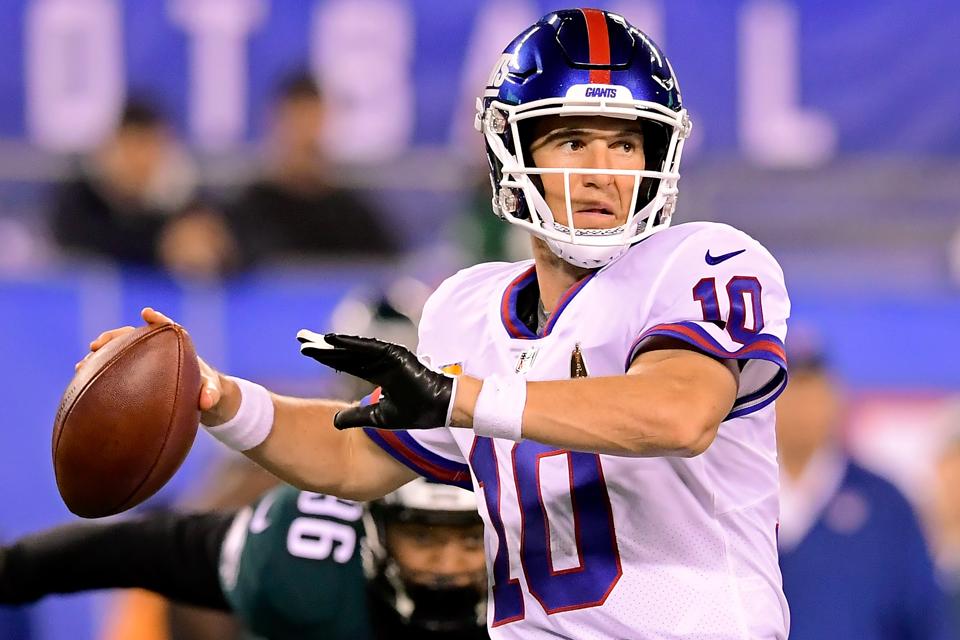 The Philadelphia Eagles will host the New York Giants tonight at 8:15 p.m. ET on Monday Night Football to wrap up Week 14 of the 2019 NFL season. This contest, which will be televised on ESPN, has some potential playoff implications in the NFC, as the Eagles are just one game back of the division-leading Cowboys after Dallas lost on Thursday Night Football to open the week. Philadelphia will get a major boost to its postseason chances with a victory tonight, as it would give the club the same 6-7 record as the Cowboys. Although the Eagles did lose to Dallas earlier in the campaign, they will get an opportunity to avenge that loss when the NFC East rivals meet again in Week 17 to close out the 2019 NFL season.

Oddsmakers are confident that Philadelphia gets a “W” tonight, installing the squad as a 9.5-point favorite in the Week 14 finale. The smart money has been coming in on the Eagles all week, forcing the line to shift after going up on the board at PHI -8. The Giants are still getting plenty of public support, as 54% of all bets made against the spread are on Big Blue. The larger wagers are on Philadelphia, however, with nearly two-thirds of the handle (64%) being comprised of Eagles tickets. The sharps are also projecting a low-scoring affair, evidenced by the total on this Monday Night Football game dropping from 46.5 to 45 despite 55% of bets being on the over. The big bettors have been siding against the public here as well, which you can see with 58% of money on the under.

Will the Eagles do their job and trounce the flailing G-Men—who haven’t won a game since Week 4—in their first showdown of the year, or will the Giants find a way to pull off a big upset in primetime for just their third win of the 2019 NFL season? Pro handicapper Jon Price of SportsInformationTraders.com has a take on this contest that you will not want to miss. Before seeing which side the Vegas expert has a lean on tonight, take a look at the complete Monday Night Football viewing guide below, which contains everything you need to know to take in the action this evening. You can also find key betting trends, the latest injury report, a weather forecast and more to help you make an informed decision when wagering on the Giants vs. Eagles in Week 14.

S Jabrill Peppers: OUT (back)

Conditions for tonight’s Monday Night Football game are expected to be wet, foggy and breezy. Temperatures will be relatively warm for the time of year in Philadelphia, hovering around the mid 50’s for much of the contest. There is a strong chance for rains from the 8:15 p.m. kickoff until the final whistle and winds will be blowing at 12 mph, with gusts up to 16 mph. Here’s a full peek at the hour-by-hour forecast courtesy of Accuweather.com: 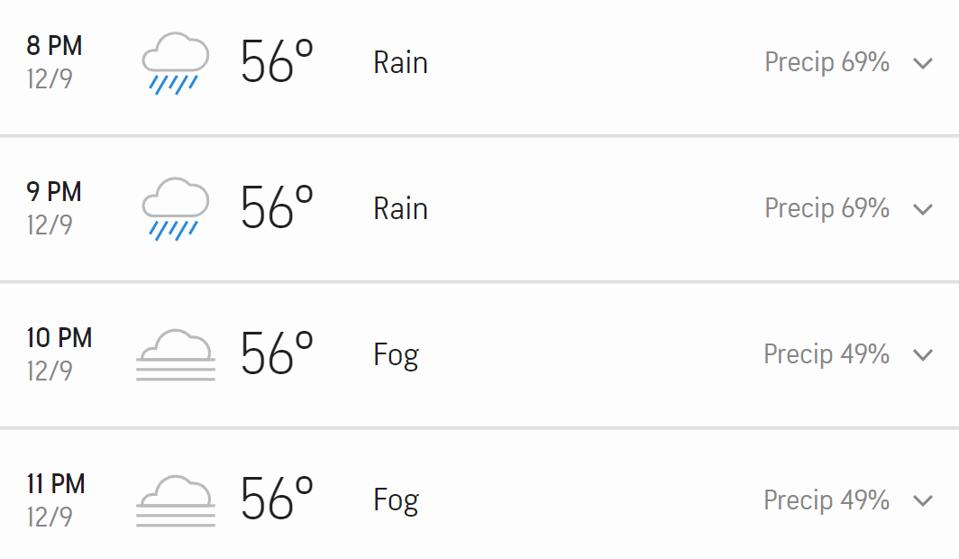 Jeff Skversky posted a clip of Philadelphia players claiming that they won’t be underestimating Giants veteran quarterback Eli Manning in Week 14 despite the signal-caller having not played since he was benched for now injured rookie Daniel Jones early in the campaign:

Manning talked about his chance to get back to practicing with the first team offense and preparing to take field for the first time since mid-September, but remained mum on his future (via ESPN):

You miss being a part of the action and practicing and all that. Felt good to get out there [Wednesday] and throw it around and compete a little bit. Again, just take it one game at a time. You never want to try to make decisions about your future while you’re still living in the present and don’t know the circumstances of what could happen. Just have to go out there and try to get a win for the Giants if I’m asked to do that. I’ll analyze everything else after the season.

Tom Pelissero reported that the Giants just doled out an extension to punter Riley Dixon, one of the few bright spots on the roster during the 2019 NFL season:

Eagles head coach Doug Pederson held a padded practice instead of giving his roster an extra day of rest leading up to Monday Night Football and said that his players performed well at it, even if some didn’t enjoy it (via CBSSports.com):

We’re coming off a long break from Sunday to Thursday, and so I just wanted to put the pads back on and just work through some things that day. Got a great response… That’s the thing, you get to see their reaction. I stand up here and go, ‘Hey, guys, we’re going to be in pads today,’ and they’re like ‘Uhhh,’ or they are like, ‘Ahhh,’ type of thing. Guys responded extremely well. I was really pleased, really happy with the way we practiced on Thursday. Energy level was high. And that’s what you see, and that was exciting.

Dan Schneier noted that Brian Flores already has more wins in his first year as the Dolphins head coach than Pat Shurmur has with the G-Men since he took over the reins at the start of last season:

Shurmur claimed that he always feels the pressure of needing to win to keep his job as New York’s head coach (via NYDailyNews.com):

Merrill Reese believes the Eagles should be plenty motivated to win on Monday Night Football:

Eagles running back Miles Sanders spoke about how it feels to be going up against fellow Penn State product and Pennsylvania native Saquon Barkley for the first time in their careers as professionals (via NBCSports.com):

It’s going to be real special. I remember talking about this even before the season started, when we were guessing where I would end up. I told him if I’m with the Eagles, we’d get to see each other twice a year. But really at the end of the day I’d be pretty selfish to tell you that I’m focused on Saquon. For real, for real, I’m really just focused on getting a W. We’ve got some stuff to handle. We’ve got to handle business. It’s going to be fun, but I’m mainly focused on something else.

Jordan Raanan found that Big Blue hasn’t played a single game in 2019 with each of their top skill position players healthy and on the field at the same time:

Six Attributes Investors Look For In Mission-Driven Founders. Why These Also Apply To You As You Build Your Career

Raul In Line To Take Over From Zidane...

Check Your Balance: Has Your Stimulus Check Arrived?

The 10 Most Comforting, Feel-Good Netflix Shows To...

Why The Telephone Is Still The Business Owner’s...