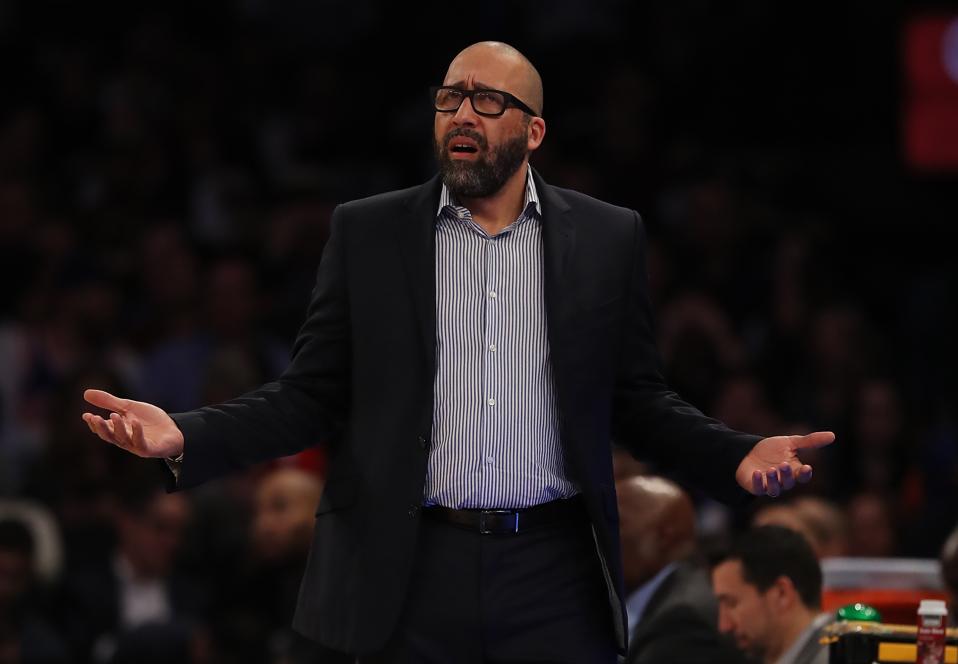 NEW YORK, NEW YORK – DECEMBER 05: David Fizdale of the New York Knicks reacts to a call against his … [+] team in the first half against the Denver Nuggets at Madison Square Garden on December 05, 2019 in New York City. NOTE TO USER: User expressly acknowledges and agrees that, by downloading and or using this photograph, User is consenting to the terms and conditions of the Getty Images License Agreement. (Photo by Elsa/Getty Images)

The sword of Damocles hanging over David Fizdale finally fell on Friday afternoon, as ESPN’s Adrian Wojnarowski broke the news that the Knicks had fired their head coach.

Back on November 10th, after yet another embarrassing, blowout loss on their home court, team president Steve Mills and general manager Scott Perry surprisingly held an impromptu press conference letting it be known that they deemed the first ten games of the season unacceptable.

It was widely speculated that the presser was held at the behest of owner Jim Dolan, who was none too pleased with the product the Knicks were putting out on the floor. At that point, most pundits assumed it only a matter of time before Fizdale would be sacrificed and thrown to the wolves, despite the fact he inherited a mismanaged roster lacking any semblance of star power.

However, that’s not to suggest that Fizdale should be painted solely as a sympathetic figure in this Greek tragedy. There is plenty of blame to go around, and the head coach certainly deserved his fair share.

The team Fizdale was tasked with coaching undoubtedly had flaws. No one would deny that. However, their putrid record (New York is currently on pace to drop 67 games, which would break the franchise’s all-time record for most losses) is not commensurate with the (albeit limited) talent they possessed. Most of the other 29 teams in the NBA have plenty of warts as well. Many other squads are forced to play without a proven point guard, or a glut at a particular position. Yet no other team in the league has won fewer games than the Knicks, and no team has a worse scoring margin (-10.8 per game).

Thus, the head coach has to shoulder at least a healthy portion of culpability. 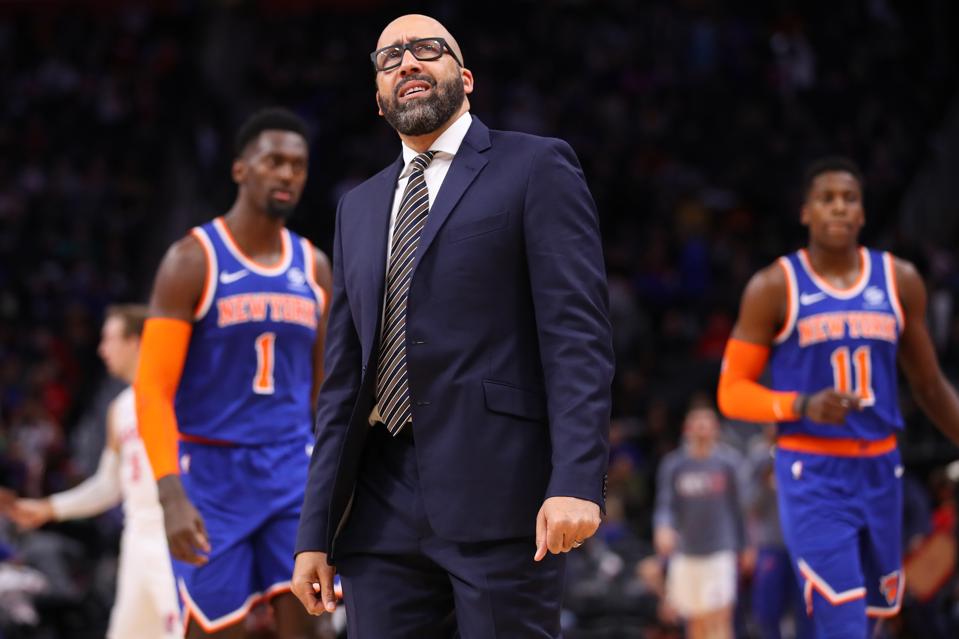 DETROIT, MICHIGAN – NOVEMBER 06: Head coach David Fizdale of the New York Knicks reacts while … [+] playing the Detroit Pistons at Little Caesars Arena on November 06, 2019 in Detroit, Michigan. Detroit won the game 122-102. NOTE TO USER: User expressly acknowledges and agrees that, by downloading and/or using this photograph, user is consenting to the terms and conditions of the Getty Images License Agreement. (Photo by Gregory Shamus/Getty Images)

And it’s not just the Knicks record; it’s the obscene manner in which they have lost so many of their games. 2019-20 is the 74th season in the history of this once-storied franchise. During that time, the Knicks have played more than 6,000 games, including both in the playoffs and regular season. Yet, they had never lost two consecutive games by more than 35 points. Until this week, when they were blown out by 44 points in Milwaukee on Monday, then by 37 points to the Nugget Wednesday night.

Back in September, the Knicks players and coaches vowed that this would finally be the year they protected their home floor and guarded the Garden. Well, six weeks into the season, the Knicks have played 12 home games. Incredibly, they’ve trailed by at least 28 points in five of those 12 contests.

The Knicks currently rank dead last in Offensive Efficiency (they are the only team in the league scoring fewer than 102 points per 100 possessions). Fizdale’s troops also rank last in field-goal percentage and assists, as the only NBA team averaging fewer than 20 dimes per game. They haven’t been much better on the defensive end. Time and again, Fizdale would bark about his team needed to do a better job defending the 3-point arc, only to allow wide-open shooters to fire away from downtown.

Since arriving 18 months ago, Fiz has failed to implement a consistent, reliable offensive or defensive structure. The team would seemingly switch gameplans as often as they switched screens on the perimeter; changing schemes and strategies as often as they changed starting lineups.

Yes, Fizdale had a mix-matched bunch of veterans thrust into his lap, which complicated his duties, but fans also failed to see significant growth in the team’s young cornerstones. Mitchell Robinson has regressed a bit as a sophomore. His ungodly gifts allow Robinson to contribute, but he still is plagued by foul woes resulting from poor habits, that conceivably could be corrected by solid coaching. Kevin Knox has failed to take a step forward, as well. Dennis Smith Jr., the key player involved in the Kristaps Porzingis deal, has been a disaster this season.

And, more so than wins and losses per se, this season was about proving that the franchise was moving in the right direction. Coaxing demonstrable improvement out of these young guns was essential. Based on the early returns, it became fair to deem Fizdale unqualified to guide and develop this young core.

Ultimately, Fizdale exits stage left as the owner of the lowest win percentage in Knicks history (.202), with a final record of at 21-83. The four-year deal he signed with New York back in the summer of 2018 was worth $22 million. Thus, Fizdale will have earned more than one million per win during his tenure.

To be fair to Fizdale, when he arrived in New York, he thought he was being brought in to help lure Kevin Durant and another superstar to a foundation that included Kristaps Porzingis. Instead, he had to coach a team that included Marcus Morris as its leading scorer and RJ Barrett, a 19-year old rookie, as its best player.

It would be insane to pin the Knicks plight on Fizdale entirely. However, on the flip side of the coin, he was clearly part of the problem and hadn’t proven he was capable of being part of the eventual solution.

According to Wojnarowski, assistant coach Mike Miller is a strong possibility to become interim head coach. However, the interim coach that fills in for the remainder of this season is not overly important. Yet, when it comes to hiring the next full-time coach during the upcoming offseason, it will be fascinating to see who is in charge of making that decision. 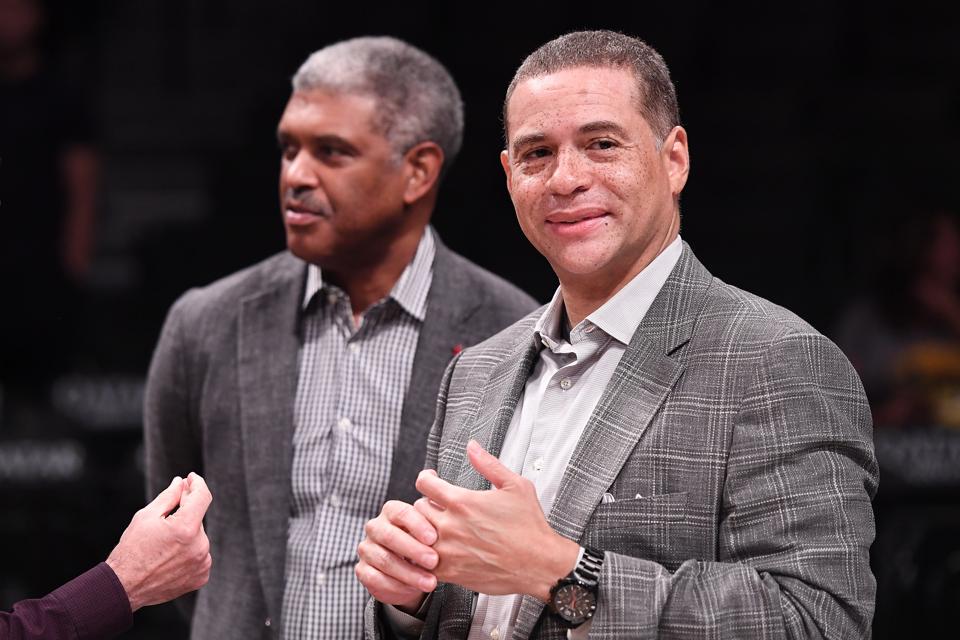 NEW YORK, NY – OCTOBER 03: General Manager Scott Perry and President Steve Mills of the New York … [+] Knicks before the preseason game against the Brooklyn Nets at Barclays Center on October 3, 2018 in the Brooklyn borough of New York City. NOTE TO USER: User expressly acknowledges and agrees that, by downloading and or using this photograph, User is consenting to the terms and conditions of the Getty Images License Agreement. (Photo by Matteo Marchi/Getty Images)

In some ways, it’s quite surprising that Steve Mills and Scott Perry axed Fizdale at this juncture, not only because they were a tightknit trio, but also because now there is no one else left to throw overboard. Over the next excruciating six months, as the humiliating losses continue to pile up, furious and frustrated fans won’t be able to chant “Fi-re Fiz-dale.” Instead, irate New Yorkers will focus their invective at the GM, team president and owner.

Based on the results of this franchise this century, Mills does not deserve to survive this most recent rock-bottom moment. He has had his fingerprints on too many of those failures already.

Mills was named the president of MSG Sports back in 2001. In 2009, Mills left MSG to create the Athletes & Entertainers Wealth Management Group, LLC. Before the start of the 2013-14 season, the Knicks announced Mills would return, as the executive vice president and GM of the organization.

So, all told, Mills was away from the team for three full seasons (2010-11 through 2012-13). The Knicks qualified for the playoffs in each of those three seasons, including miraculously winning 54 games and capturing the Atlantic Division title in 2012-13. To use modern-day basketball parlance, Mills’ on/off numbers are not favorable.

Mills has served the Knicks organization for 13 of the past 16 seasons, and New York has somehow managed to post a losing record in each and every one of those 13 campaigns he’s been a part of. Dating back to 2001, the Knicks have had far more head coaches (12, soon to be 13) than playoff wins (7).

Ideally, owner Jim Dolan would use his massive fortune to make a godfather offer to an established, respected executive, such as Toronto’s Masai Ujiri, OKC’s Sam Presti, or Houston’s Daryl Morey. But, that requires parting ways with Mills, to whom Dolan has shown great loyalty, and convincing another qualified candidate to embrace the Herculean task of re-rebuilding the Knicks.

Mills and Perry deserve credit for protecting the team’s future first-round picks and avoiding any albatross contracts. As a result, the Knicks’ future is not nearly as bleak as some paint it; however, the franchise’s eventual success is dependent upon a GM/coach combo capable of leading the organization to prosperity.

This Week In XR: Qualcomm Designs Device Of Future, Facebook Buys Beat Games, Something You Can’t Have For Christmas

You Can Have My Old Business That Makes...

How Regulation Of “Harmful Speech” Online Will Do...

From The Front Lines: How 7 Fashion Businesses...