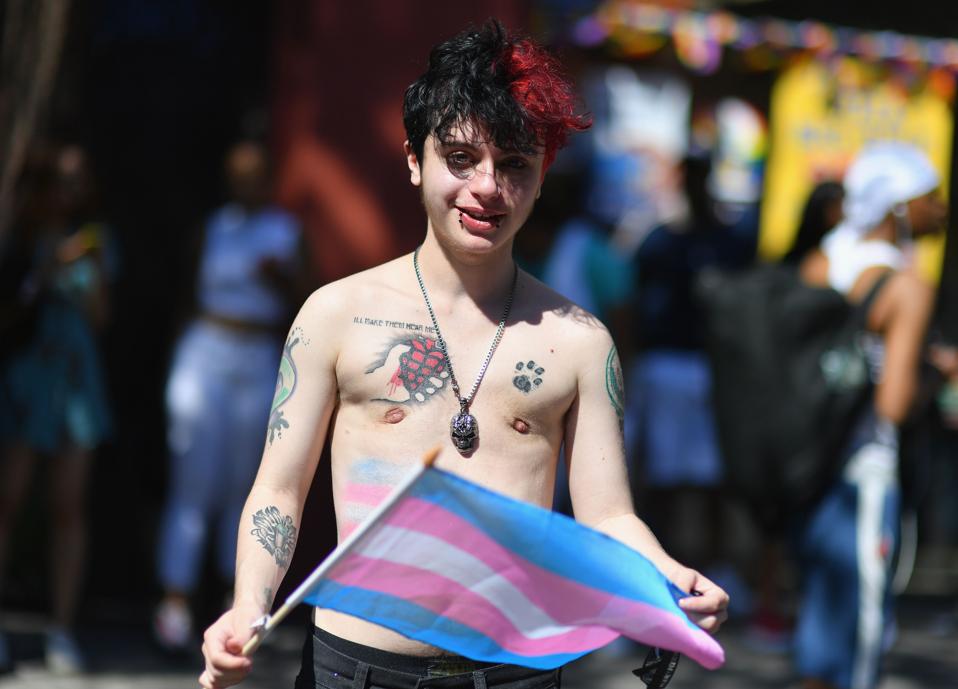 The capitals of New York State and Idaho are 2,494.5 miles apart, and for young people who identify as transgender it might as well be a million miles.

One week ago today, the top law enforcement official in the Empire State announced transgender minors had the power to change the gender marker on their birth certificates to reflect their authentic gender identity, from the sex they were presumed to be at birth.

“Effective immediately, transgender individuals born in New York will have the right to make this deeply personal decision without the government’s unwarranted denial or without having their privacy violated,” New York Attorney General Letitia James announced on March 10th. “We will not allow an outdated policy to stop us from providing every individual with equal dignity and respect.”

Why is this such a big deal? A trans boy who is not yet 18, who goes by the initials M.H.W., explained why.

“This is awesome. Now all my identity paperwork matches, and I can go forward not having to worry about legal documents conflicting with who I am again. I get to just go on being me,” said M.H.W.

Applying for college, work, and many other circumstances are complicated when someone’s birth certificate says one thing, and their gender presentation says another.

“Every person should be recognized and respected for who they are,” said his lawyer, Omar Gonzalez-Pagan, Senior Attorney at Lambda Legal, in a statement.

“It shouldn’t take litigation for a person’s rights to be recognized. But with this announcement, New York State eliminates an outdated and unjust barrier to transgender minors’ ability to be themselves and have accurate, essential identity documents.”

Prior to this change, those born in New York who sought to correct the sex listed on their birth certificate had to be at least 18 years old, and had to submit a notarized affidavit from a physician, nurse practitioner, or physician assistant, confirming that surgical procedures had been performed on the applicant to complete sex reassignment.

The only other option would be for a trans New Yorker to get one of these medical professionals to submit an affidavit confirming they had treated, or reviewed and evaluated, their gender-related medical history for a series of diagnoses specific to gender dysphoria. There was no option for minors, and the burden of having to share confidential, personal medical records with bureaucrats was seen as invasive and inconsistent with federal HIPAA guidelines on patient privacy.

So, good on you, New York. But unfortunately, many other states are on a far different track. After the backlash North Carolina and other states suffered in trying to restrict transgender people to using public bathroom facilities matching their birth certificates, some states are now pushing legislation to block trans people from changing their gender markers listed on their birth certificates.

Idaho is one of those states and the State Senate is now considering such a bill, already passed by Idaho’s House. Their own attorney general said it would not likely survive an anticipated court challenge.

And so the focus in Idaho is on winning a more likely victory for opponents of trans equality: The State Senate voted 24-11 on Monday in favor of House Bill 500, the so-called “Fairness in Women’s Sports Act” to ban trans students who identify as female from all girls’ and women’s athletics. The ban would apply to all sports teams sponsored by Idaho public schools, colleges and universities.

According to the Human Rights Campaign, “not only is it discriminatory, it invades the privacy of Idaho’s youth. HB 500 contains a provision that would require athletes to prove their gender via blood, genetic or DNA testing.”

Trans athlete and advocate, Chris Mosier, who tweeted that he had life-affirming surgery ten years ago today, said it goes even beyond that kind of testing; the bill would also be an invasion of personal privacy for all girls, not just trans girls.

Senate Minority Leader Michelle Stennett, a Democrat, agreed, saying the bill would require any student whose sex is questioned to submit to an intrusive genital exam, regardless of their age. “It would damage and hurt her reputation and dignity for life,” Stennett said. “Beyond the medical inaccuracies, this bill risks harming the physical and emotional health of our children.”

“If HB 500 becomes law, Idaho will be the first state to have such a retrogressive, invasive and patently anti-transgender law on the books,” said Alphonso David, president of HRC, in a statement on the organization’s website.

“If HB 500 becomes law, it will send a strong message to trans youth that they are less than their peers and not deserving of community and acceptance. We implore Governor Little and other legislative leaders to stand up and reject this discriminatory measure.”

Supporters of HB 500 argue the ban is necessary to preserve rights guaranteed by Title IX, which prevented sex discrimination in education and opened athletic opportunities for women. They claim transgender female athletes have physical advantages, even though Idaho has no record of a trans female student athlete competing in any sporting event, let alone dominating one. The case of trans girls competing in Connecticut is often cited, but as outsports.com reported, a girl who is cisgender — meaning, not transgender — and a plaintiff in a federal lawsuit, recently defeated the state’s two most prominent trans female athletes — twice in 8 days.

As HRC’s president noted, and as Forbes and The New York Times has reported, this is part of an overall pattern targeting transgender Americans.

“In states across the country, extreme lawmakers are targeting transgender youth and seeking to discriminate against them through any legislative vehicle possible,” David stated. “These elected officials and the groups backing them are proposing a ‘solution’ in search of a problem — and using transgender kids as pawns to stoke division at a time when our elected leaders should be finding ways to unite us.”

There are procedural votes going forward in the Senate today before it reaches his desk, meaning there is still time to stop the most discriminatory measure ever enacted against transgender American youth from becoming law.

The Challenge Of The Coronavirus: Why One Star Chef Closed Rather Than Do Carryout And Delivery

How Founders Can Cope With The Emotional Roller Coaster Of Entrepreneurship

Cybersecurity Priorities Are A Matter Of Perspective