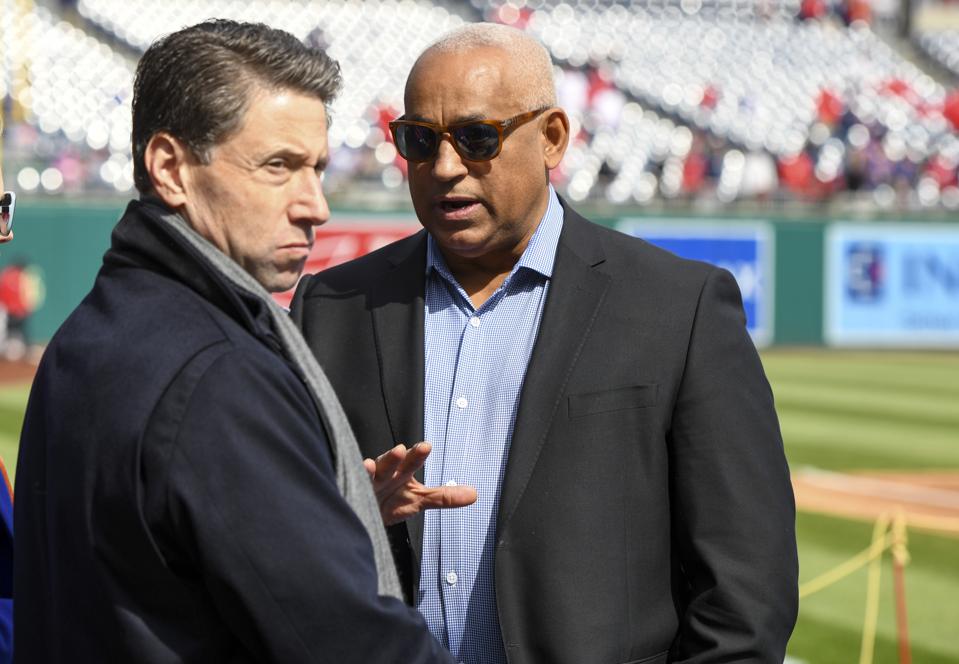 WASHINGTON, DC – MARCH 28: COO of the New York Mets, Jeff Wilpon (L) talks with Mets Special … [+] Assistant to the General Manager Omar Minaya prior to the opening day game between the New York Mets and the Washington Nationals on March 28, 2019, at Nationals Park, in Washington D.C. (Photo by Mark Goldman/Icon Sportswire via Getty Images)

It was so predictable, it might have been considered inevitable.

The news Tuesday that the proposed sale of the New York Mets to Steve Cohen of SAC Capital might be falling apart over last-minute changes demanded by the current owners, led by Fred and Jeff Wilpon, followed a script so consistent that I’d written about it in this space just a few months ago.

This is what the Wilpons do. There’s no deal they can’t try to stretch the limits of good faith on, no version of events they don’t think they can improve, even when circumstances are already in their favor.

That is why David Einhorn walked away in 2011, and reportedly, why Steve Cohen is prepared to do the same thing in 2020.

There are, however, a number of questions that remain unanswered with the Wilpons still in possession of the Mets. How they shake out will dictate what happens from here.

QUESTION 1: How much did they need to sell?

It is no small thing that this winter, the decision was made to sell the Mets. The Wilpons have been determined to hold onto team control — arguably to a fault, since their efforts at double-dealing cost them the Einhorn deal, and it appears, the Cohen deal as well.

But there’s something that doesn’t add up: if they were so eager to retain control, there’s a far easier way to do so: just don’t sell the team.

Which brings us to the bigger question: just what, financially, pushed them to explore a sale in the first place?

We knew in granular detail just how dire their financial situation was in the years following Bernie Madoff’s exposure because the trustee for the Madoff victims, Irving Picard, sued them for clawback of much of the money they’d made. He argued, under the standard that the Wilpons knew or should have known, that they owed the true Madoff victims money. And Picard had an impressive case — including Noreen Harrington, who’d warned Sterling partner Saul Katz directly in her professional capacity, hired by Sterling, to evaluate risk, that Madoff was a fraud.

Katz threw her out of his office, she left, you know the rest. Ultimately, Picard determined the Wilpons and Katz didn’t have the money he sought and a hardship settlement soon followed.

At that point, they caught a break. RSNs experienced a boom, SNY, which they own a majority stake in, doubled in value, and they had additional asset to borrow more money against. They have limped through the rest of the decade, financing their annual debt payments with what would otherwise be team profits — your ticket purchases going toward their survival and, if there’s anything left over, maybe an outfielder or two.

But there’s been no dip in RSN values, even though they’ve largely plateaued. There’s no evident public change in circumstances elsewhere in baseball’s economy.

So why now? Was there a third Ponzi scheme? We don’t yet know, since no one is suing them at the moment, but it seems clear that something motivated them to sell that wasn’t a desire to be rid of the Mets, and it’s unlikely a financial reason large enough to force a sale in the first place is easily remedied some other way.

QUESTION 2: Is Steve Cohen really out of the picture?

I know, I know, the story says he’s walking away. But Cohen, who was already a minority owner in the club, has made no secret of his lifelong love of the Mets. If he thinks buying the Mets is good business, and the owners need to sell, is he really going to walk away on principle?

QUESTION 3: Will MLB, at long last, do something? To clarify: something helpful?

The answer, based on history, is probably not. But it is worth considering a middle road as well.

Let’s be clear: the Wilpons wouldn’t have survived the winter of 2011 in charge of the Mets if Bud Selig, Fred Wilpon’s old friend, hadn’t floated them a $25 million bridge loan. But after significant blowback at this bit of favoritism from some other owners, Selig took a different tack: he didn’t do anything to force them out, as he had Frank McCourt of the Dodgers, he provided public air cover, but he didn’t give them more of MLB’s money, either.

Rob Manfred, Selig’s successor, doesn’t have the same personal relationship with Fred Wilpon. He certainly hasn’t given any public indication that he’d be willing to provide MLB’s financial assistance to ensure the viability of the Wilpons as an ownership group. And, quite frankly, he might take a good, hard look at how baseball’s bottom line is negatively affected by a zombie franchise in the National League’s largest market.

More likely, of course, he’ll reflect the larger will of the owners, which naturally prefers the gentle downward pressure on player salaries when what should be one of the largest bidders for free agent services largely opts out of that game.

So looking to MLB to save the Mets from the Wilpons, well, don’t expect that anytime soon. Not without current and future events deviating from history.

And the Wilpons just provided yet another reminder that history, with them, is usually destiny.

Orbitkey Nest Organizes Your Desk And Maximizes Your EDC