Breaking
Mayo Clinic And Kaiser Permanente Invest $100 Million...
MozCon Virtual 2021 Interview Series: Wil Reynolds
Commodity Spikes May Be Close To Peaking, Futures...
Benefits of Responsive Web Design
ESBC Major Updates: Tons Of Heavyweight Greats Added...
5 On-Demand Courses To Help Develop Your Leadership...
How to Run Nonprofit Marketing Ads
Entrepreneurs Are Bringing Transparency To Home Buying And...
Best Incentive To Get Vaccinated: Money, Messaging, Or...
Page Level Query Analysis at Scale with Google...
How A CIO Can Align IT With Business...
Blogger of the Month: Jo, Girl Eats World
6 Things Women In Business Know That Men...
How to Use First-Party Data for Ad Personalization
Pressing Reset—Putting A Fallen Unicorn Back On Its...
How We Went Viral: Promoting Content with Influencers,...
Home Finance Next Stimulus Bill Will Likely Have These Three Major Changes
Finance

Next Stimulus Bill Will Likely Have These Three Major Changes 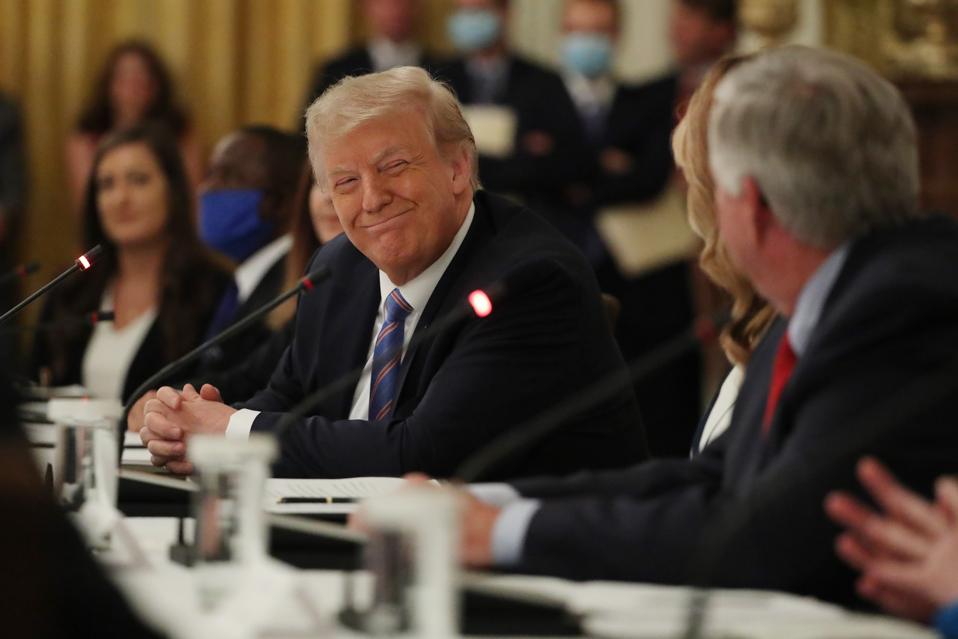 WASHINGTON, DC – JULY 07: U.S. President Donald Trump meets with students, teachers and … [+] administrators about how to safely re-open schools during the novel coronavirus pandemic in the East Room at the White House July 07, 2020 in Washington, DC. As the number of COVID-19 cases surge across southern states like Florida, Texas, Louisiana, South Carolina and Arizona, Trump joined with guests from across the country to discuss how to responsibly return to the classroom. (Photo by Chip Somodevilla/Getty Images)

It seems like every day we are receiving more and more details about the next stimulus check bill as Senate and House leaders work behind the scenes on the next stimulus package. Congress reconvenes from its July 4th recess on July 20th to start stimulus debates and as that date draws near, more information is being dripped out.

Senate Majority Leader Mitch McConnell (R-KY) stated in a July 13th interview that he and Treasury Secretary Mnuchin have “been working on this [the next stimulus bill] for several weeks.” Discussion points include another stimulus check, extending unemployment benefits, and even funding to help schools reopen.

McConnell is also disclosing several significant changes that Republicans and Democrats will discuss to start the legislative process but may cause some friction.

The “menu of options” is continually changing as the national health and employment situation changes. For instance, the stimulus a month ago was more likely to have pro-growth incentives like “back to work” bonuses as states were reopening rapidly and infection rates were low.

Fast forward to today and the near-term economic outlook is more uncertain. Multiple states are ratcheting back their reopening plans to counter a surge in new COVID-19 cases. Big bank CEOs in their July 2020 earnings calls mention they are preparing for a wave of personal finance malaise if federal stimulus benefits cease.

The upcoming stimulus bill is now more likely to emphasize extending unemployment benefits and issuing a second stimulus check for those with the greatest financial need.

Republicans and Democrats are seeking to balance their existing stimulus proposals to benefit taxpayers who need aid the most but without a hefty price tag.

When the House of Representatives passed the Heroes Act, the stimulus measures weres very similar to the Cares Act. It seems like the next stimulus bill will like have have a few major differences.

Let’s take a look at what was in the Cares Act that became law in late March.

Some of the signature pieces of this bill include:

However, there are several glaring flaws as the Cares Act legislative process was rushed. The general public and the government agencies responsible for administering the benefits had to work out several problems to get the aid money moving.

One of the most immediate frustrations was determining who qualifies for a stimulus check. Income phaseouts began at $75,000 for single taxpayers and $150,000 for joint taxpayers based on your most recent tax return info. It turns out several groups could not receive full payment including college students and spouses without a Social Security Number.

Also, states were not ready to issue the $600 weekly federal benefit to the self-employed and those who don’t qualify for state unemployment insurance. States had to create a new application portal and then wait for federal funding to arrive.

Even as the ink was drying on the Cares Act, lawmakers began working on various proposals for a follow-up stimulus. The only plan to pass a full chamber is the Democrats’ Heroes Act.

The act passed in the House in May 2020 but is a non-starter in the Republican-led Senate.

The next stimulus bill will likely be smaller in size than the Heroes Act and Cares Act. But Congress may use the best parts from both proposals to reach a bipartisan agreement.

Democrats may push for these key Heroes Act proposals in this summer’s bill:

The Heroes Act also addresses some of the Cares Act benefit errors. Specifically, helping more people qualify for a stimulus check. For instance, spouses and children who only have a taxpayer identification number (TIN) can receive payment too.

There are several overlapping benefits between the Republican and Democrat proposals. But each party has different positions on the total cost and benefit scope.

What Are The Three Big Changes We May See?

Here are the latest insights we have about what Congress may propose next week. Below are some of the benefits that lawmakers proposed in the Cares Act and Heroes Act that we may see again in this bill.

Until a few weeks ago, the White House and congressional Republicans adamantly opposed lengthening the $600 weekly benefit. Then the number of new coronavirus cases began increasing and some businesses had to start shutting down again in various states.

While a benefits extension seems inevitable, the revised federal unemployment insurance will not be as generous for most recipients. Treasury Secretary Mnuchin hinted in early July the new benefits may cap at the worker’s regular weekly income.

Lawmakers must decide if they will adopt the Heroes Act proposal of extending the benefits until January 31, 2021. The new Congress elected in November would discuss the next stimulus bill.

The stricter benefit caps stem from a research paper by the National Bureau of Economic Research. Their study finds that approximately two-thirds of laid-off workers earn more collecting unemployment than their standard wage. This same paper also suggests that 20% of recipients may earn double their usual weekly paycheck.

While the $600 weekly benefit won’t make you wealthy, Republicans routinely suggest the enhance benefits create a disincentive to work in states with a low cost of living.

For example, the maximum weekly unemployment benefit in Tennessee is $275 plus the $600 the Cares Act benefit. Earning both benefits is equivalent to an annual pre-tax salary of $45,500—a comfortable income in many parts of Tennessee.

Another reason Republicans may rally behind extending unemployment benefits is if businesses get coronavirus liability protection. Senator McConnell wants the liability shield to apply from December 2019 through 2024 to minimize potential lawsuits and business closures.

A second stimulus check is another idea that Republicans have waffled over since the Cares Act passage. It now feels almost certain that the IRS will distribute a second check, but for how many and for how much?

Like the federal unemployment benefits, it’s likely that fewer people will get a second stimulus payment.

McConnell has said that he wants to target them to those most hurt by the pandemic – and he’s mentioned $40,000 in income as a possible income limit. This leads us to believe that earning an annual income of $40,000 or less will most likely qualify. The most-affected households earn an income below this threshold. This new income limit is lower than the $75,000 limit the Cares Act and Heroes Act share.

We don’t know how large the second stimulus check will be yet for adults or students. The payment will likely be at least $1,200 for adults and potentially higher. President Trump is on record on July 1st interview saying: “I support actually larger numbers than the Democrats, but it’s got to be done properly… I want the money getting to people to be larger so they can spend it.”

The payment amount can be higher than the first check if you qualify.

This check should arrive sooner than the Cares Act payment as the IRS should have your direct deposit details on file. Similar to the first check, this second payment will be an “advance” refundable tax credit on your 2020 federal tax return.

A payroll tax waiver on Social Security and Medicare tax withholdings is the one stimulus measure with President Trump’s constant support.

The current tax rate is 6.2% for Social Security (on the first $137,700 in annual income) and 1.45% for Medicare. This waiver would temporarily reduce the tax amount and increase your take-home pay.

This benefit helps those who don’t receive the second stimulus payment or unemployment insurance. However, this waiver doesn’t help the unemployed and retirees.

Legislators will need to decide on how much to reduce the payroll tax. President Obama enacted a similar tax holiday during the Great Recession to lower the rate from 6.2% to 4.2% in 2011 and 2012.

Another potential contention point is a waiver increases the existing funding shortfalls for Social Security and Medicare. Reducing the rate for those who keep working can result in a future tax hike to offset the lost revenue from 2020.

When Will the Next Stimulus Check Bill Pass?

The Senate and House of Representatives have a narrow working window to reach a bipartisan agreement. Both chambers have a scheduled multi-week August recess. Not passing a bill in July or August means Congress might pause stimulus talks until after Labor Day weekend in September.

House Speaker Nancy Pelosi states she is willing to delay or cancel the House recess to pass the next stimulus check bill.

The Next $600 Federal Unemployment Benefit Will Likely Be Smaller

Where Is My Tax Refund? Why It May Be Late And When To Expect It

IRS To Pay Interest On Your ‘Late’ Tax Refund

As Other Restaurants Close, Bonchon, Known For Korean Fried Chicken, Is Growing