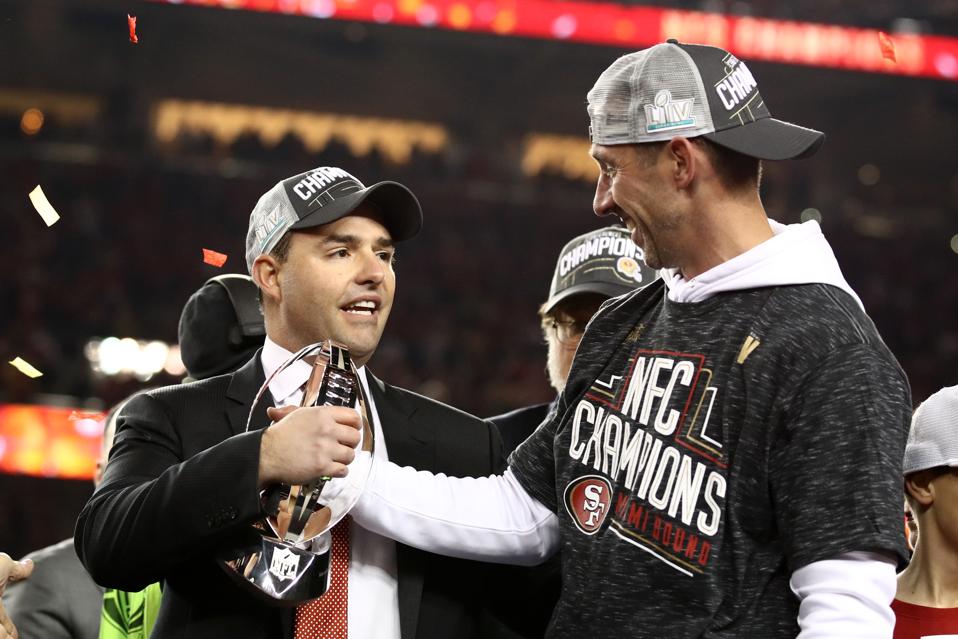 From 4-12 to 15-3 and a spot in Super Bowl LIV. This is what we’ve seen from the San Francisco 49ers after their dominating 37-20 victory over the Green Bay Packers in Sunday’s NFC Championship Game.

Taking on the same Packers squad they blew out by the score of 37-8 back in Week 12, the 49ers opened up a 27-0 halftime lead behind a dominant rushing attack and physical defense.

With Tevin Coleman sidelined to an elbow injury early on, Raheem Mostert did his thing on the ground. That included 220 rushing yards and four touchdowns in an historical performance from the former undrafted free agent.

In a game that saw Jimmy Garoppolo attempt eight passes, the 49ers imposed their will in pretty much every way. It now sets up a Super Bowl LIV matchup with Patrick Mahomes and the high-flying Kansas City Chiefs.

It All Came Together 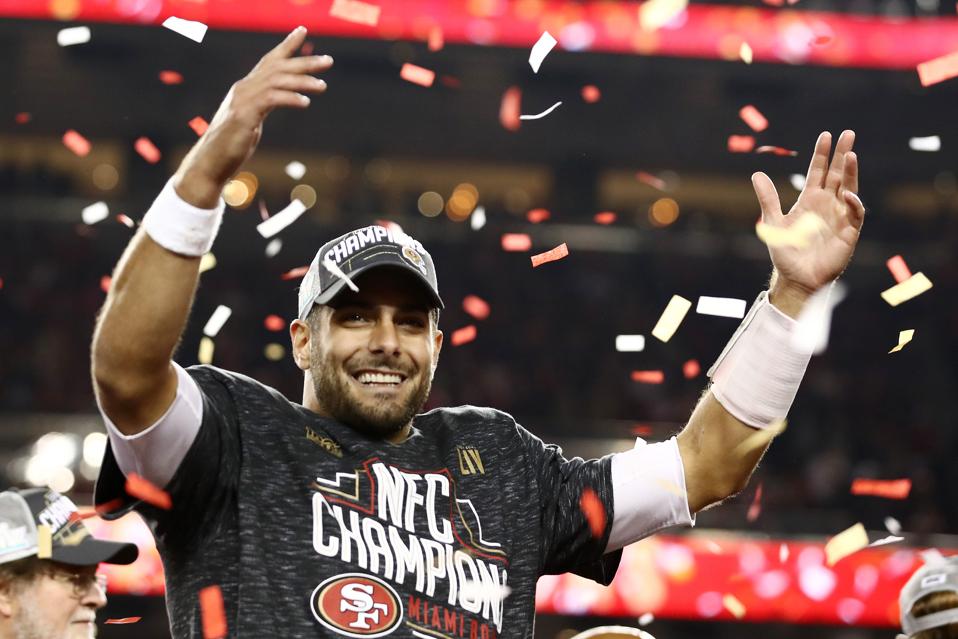 Garoppolo did most of the damage back in Week 12, completing 14-of-20 passes for 253 yards in a blowout win over the Packers. At least initially, it seemed like the Packers were looking to stop San Francisco’s passing game.

Enter into the equation a bully of an offensive line, providing the above-mentioned Mostert with clean rushing lane after clean rushing lane. As much as Mostert awed onlookers in Santa Clara, it’s the performance in the trenches that defined San Francisco’s win.

That included yet another brilliant outing from the 49ers’ defensive front. Aaron Rodgers was sacked three times and hit a total of six times in the game. And while Aaron Jones averaged nearly five attempts per rush, an early 27-0 lead for San Francisco pretty much eliminated Green Bay’s rushing attack.

When a team can dominate physically on both sides of the ball, it can win pretty much every game. This is what it’s going to take against Mahomes and the Chiefs.

It was in no way a surprise that Moseley replaced a struggling Ahkello Witherspoon in the starting lineup on Sunday. The former undrafted free agent took over for Witherspoon early last week, helping shut down the Vikings’ passing attack in the process.

With San Francisco up 20-0 late in the second quarter, Moseley forced a rare Rodgers interception to set up a touchdown and a four-score lead going into the half.

This is the type of play-making ability Moseley has put up since becoming an important part of the 49ers’ defense opposite Richard Sherman.

No Passing Game, No Biggie

Eight pass attempts. The fewest we have seen from a winning team in playoff history in about a half-century. San Francisco did not need to put the ball up in the air with Green Bay unable to stop its rushing attack. All said, Garoppolo completed 6-of-8 passes for 77 yards.

Instead, the 49ers averaged an absurd 6.8 yards on 42 rush attempts. This type of dominance from a time of possession perspective doomed Green Bay, who didn’t have enough time to complete the comeback. It’s also going to be important heading into Super Bowl LIV against Mahomes and the Chiefs.

A game that saw San Francisco complete just six passes also included this rookie second-round pick tallying 89 yards on four touches. It was Shanahan’s ability to get the ball into Samuel’s hands that was eye opening.

He might not be Tyreek Hill, but Samuel’s ability to make game-changing plays on a consistent basis has been huge. It was big over the final half of the regular season. It’s been huge during the first two games of the playoffs. It’s definitely something to watch heading into Super Bowl LIV.

It’s Not A Numbers Game 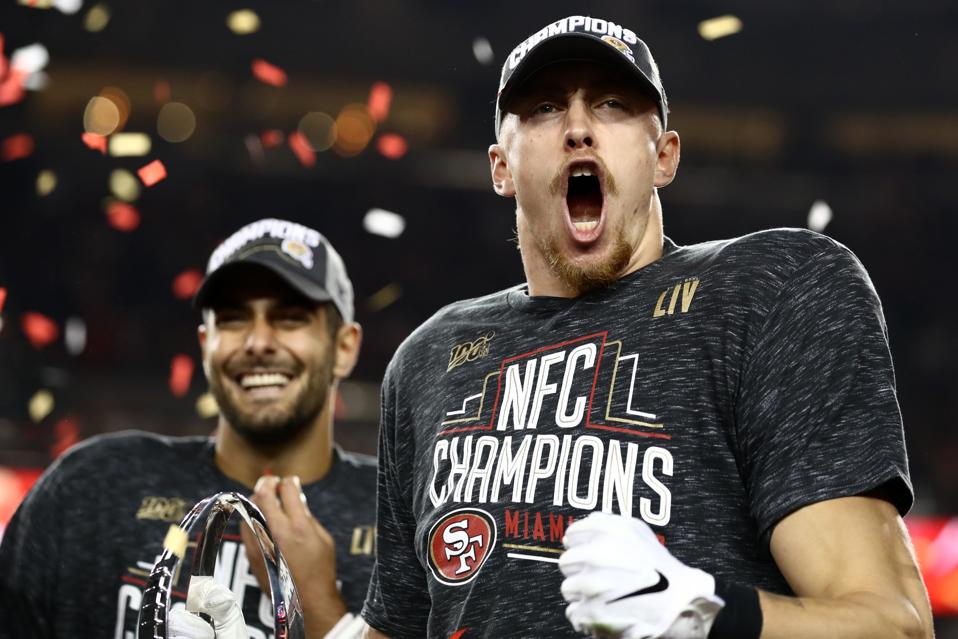 Pro Bowl tight end George Kittle caught one pass for 19 yards on as many targets. Though, that one catch came in the fourth quarter to help move the sticks with Green Bay’s offense starting to get going. It was not one of Kittle’s patented by performances. In no way does that matter. The All-Pro made an impact in the blocking game, much like he has all season.

This is what’s defined the 49ers during their run to Super Bowl LIV. It’s not about the numbers. Just ask Mr. Garoppolo. It’s about coming to play physical and having your head in the game. Having outscored their first two opponents of the playoffs 64-30, that’s what it has been about in January.

The Packers were in desperation mode down 17 late in the fourth quarter. That’s when Rodgers decided to toss the ball up down the field. Richard Sherman came up with an interception to end the game, enabling the 49ers to take a knee and head to Miami.

In an alternate universe, this seemed to make absolutely no sense. It was just six years ago that Sherman ended the 49ers’ Super Bowl aspirations as a member of the Seattle Seahawks in the NFC Championship Game. Talk about coming full circle. Funny how this works. 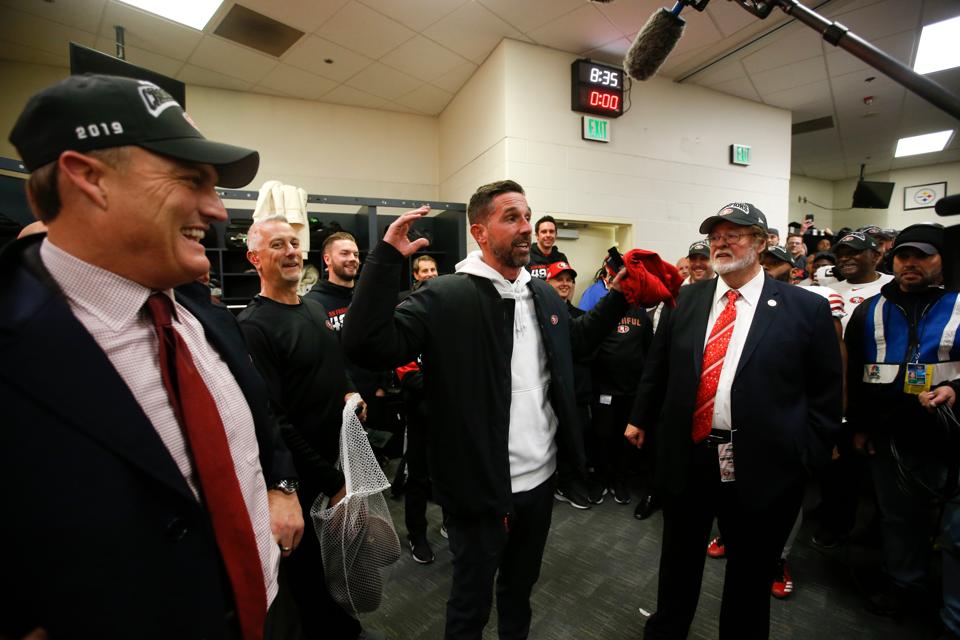 We must give John Lynch and Kyle Shanahan credit for this turnaround. (Photo by Michael Zagaris/San … [+] Francisco 49ers/Getty Images)

We could very well be looking at the greatest single-season turnaround in recent NFL history. That’s not hyperbole. Months after selecting No. 2 overall in the NFL Draft following a disastrous four-win season, the 49ers are heading to Miami with the franchise’s sixth Lombardi Trophy on their mind.

We will give credit to the players on the field. They did their thing. But it’s the change of culture that Shanahan and general manager John Lynch adopted once they took over that’s the primary reason for this success.

Shanahan and Lynch tore it all down. It was the only way this duo would be able to build the 49ers under their philosophy. After 10 wins in their first two seasons, everything came together in 2019. Both longtime NFL men should be commended for this. Change of culture. Welcoming back the history of the organization. All of this played a role in San Francisco earning a trip to Super Bowl LIV. Don’t ever forget that.

3 Trends To Look Out For When Promoting...

With The NBA Suspended, It’s Time For The...

What Types Of Small Businesses Receive The Most...