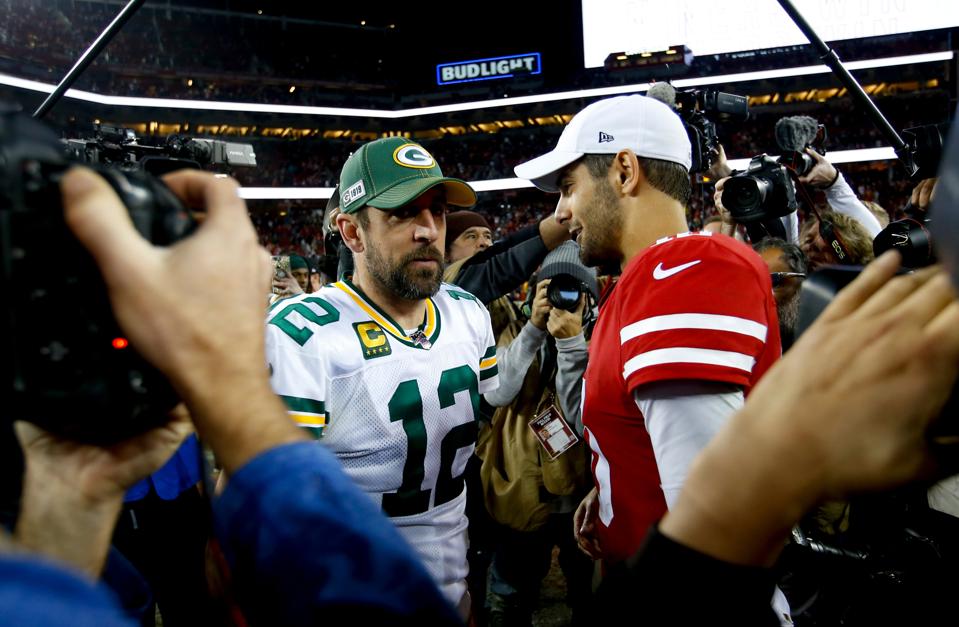 It has come down to this. Two teams playing at Levi’s Stadium with a trip to Super Bowl LIV in Miami on the line.

The unexpected has indeed happened with the San Francisco 49ers one win from their seventh appearance in the big game. On the other side sits a Green Bay Packers team that’s also in the midst of a surprising 2019 campaign after missing the playoffs altogether last season.

It’s a rivalry renewed. It pits Aaron Rodgers against his childhood team. It gives Jimmy Garoppolo a chance to prove himself among the greatest in 49ers franchise history.

There’s a lot on the line with the NFC Championship Game set to kickoff in Santa Clara Sunday afternoon. Without much more ado, let’s go ahead and preview this NFL semifinal game. 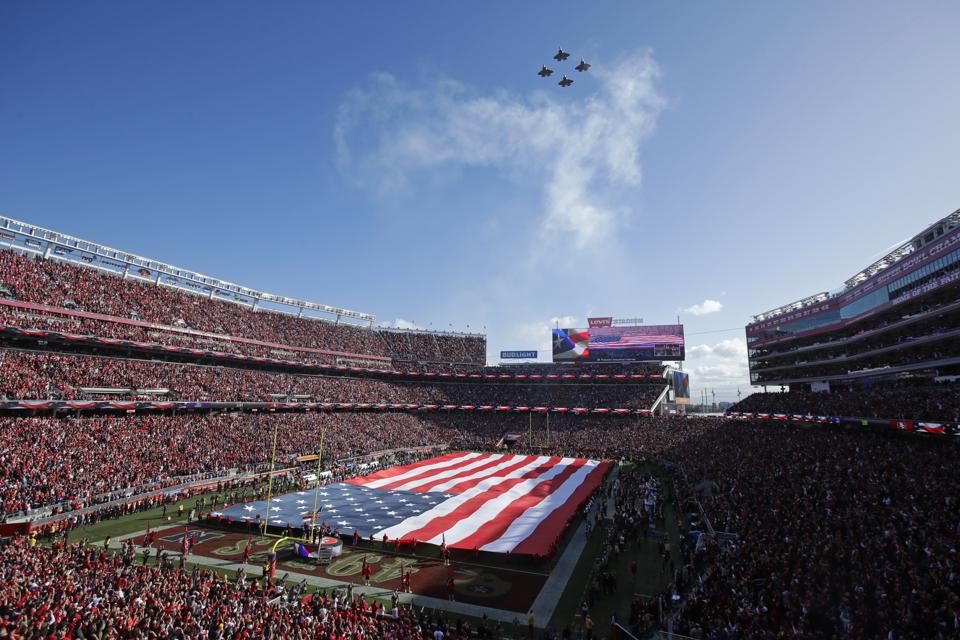 Levi’s Stadium has been a major home-field advantage for the 49ers under Garoppolo. (AP Photo/Jeff … [+] Chiu)

I focused last week on the 49ers’ need to maintain what has been a strong home-field advantage under Jimmy Garoppolo. Despite the early Stefon Diggs touchdown, that became apparent pretty much out of the gate last week. Very few Vikings fans were on hand at Levi’s Stadium. The place was as loud as it’s been since the 49ers moved in back in 2014.

This must be the case come Sunday afternoon. The game has already sold out with the 49ers expecting a larger crowd than what was in attendance for Super Bowl 50. Garoppolo is now 10-2 in his career as the 49ers’ starter at Levi’s Stadium. It’s time for the crowd to get loud, and the team on the field to take advantage of it.

Getting More From Jimmy Garoppolo

Garoppolo was not great in the 49ers’ divisional round win over the Vikings. He didn’t need to be. He completed 11-of-19 passes for 131 yards with a touchdown and an interception in the game. Only six of those 11 completions came after San Francisco’s game-opening touchdown drive.

It goes without saying that Garoppolo must be better against Aaron Rodgers come Sunday afternoon. He’s thrown just three touchdowns compared to three interceptions over the past four games. The good news here is that Garopolo dominated Rodgers back in Week 12, throwing for 253 yards and two touchdowns without an interception.

The Continued Domination On Defense 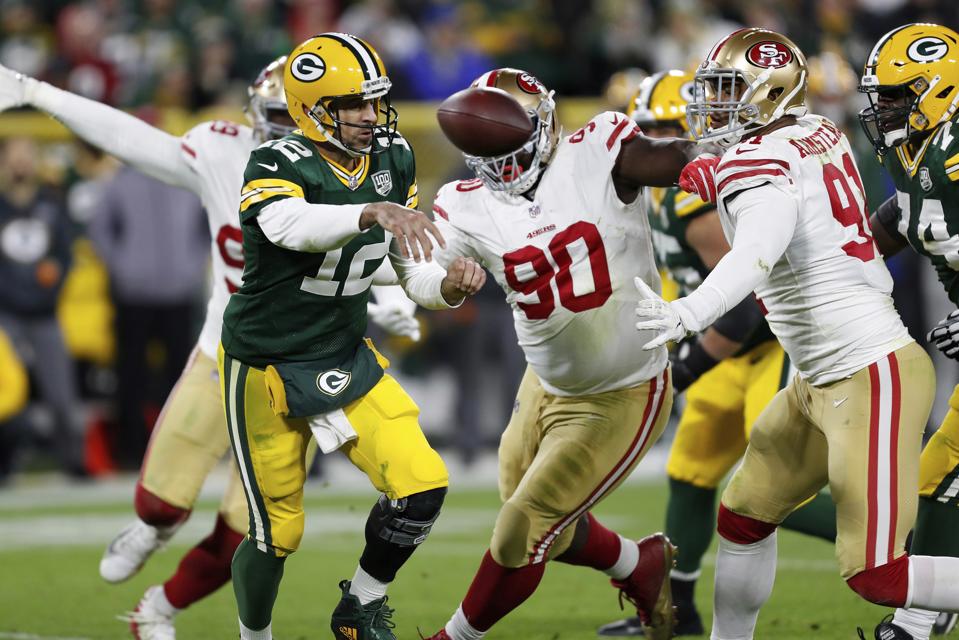 The 49ers’ dominant defense put up a whale of a performance against Aaron Rodgers back in Week 12. … [+] (AP Photo/Matt Ludtke)

It’s not a secret that the 49ers’ run will go as far as their defense takes them. When the likes of Dee Ford, Nick Bosa and Kwon Alexander have been on the field together, San Francisco has yielded a total QBR of under three (out of 100). With Ford and Alexander returning last week, the 49ers’ held Minnesota to seven first downs (the third-lowest total in playoff history) and 147 total yards of offense.

A similar performance is not necessarily needed against Green Bay. It would be foolish to expect a repeat of what we saw during the regular season. Aaron Rodgers is too good for that to happen again. But something close to it will be needed for San Francisco to avoid the massive upset.

This is the other key. Again, I’m not talking about complete and utter domination of the Packers’ offense. But there’s every reason to believe that San Francisco’s defense will be just as crisp. Remember, Dee Ford and Kwon Alexander both missed that game to injury. It’s no small thing given just how great this unit is with those two in the mix.

November 24 at Levi’s Stadium saw Robert Saleh’s defense hold Rodgers to the worst statistical performance of his career. That included 66 net passing yards on 33 attempts. Overall, Green Bay tallied less than 200 yards of total offense and did not cross midfield for the first 40-plus minutes of the game.

The Packers know full well that San Francisco’s defense is hard to beat. They are not going to drive the length of the field on a consistent basis. That’s where the 49ers have to be better than Seattle in taking advantage of third downs. Green Bay converted on 9-of-14 third-down opportunities in the divisional around against the Seahawks. 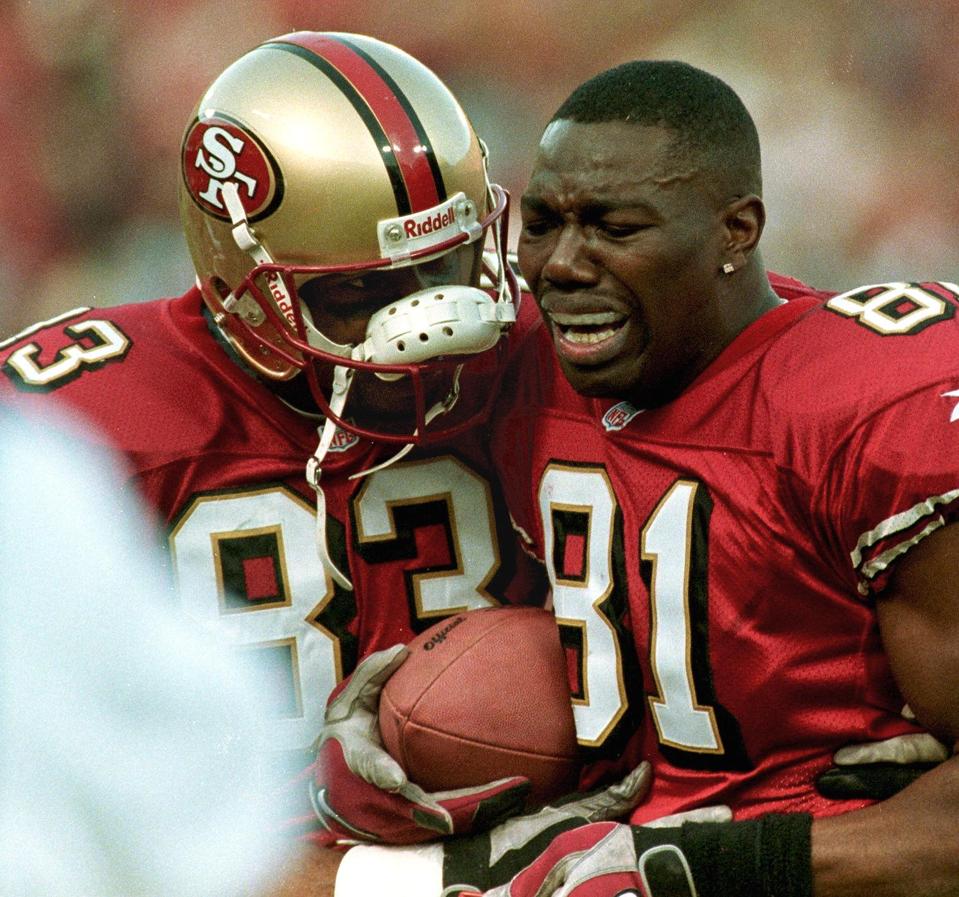 The Catch 2 is synonymous with this playoff rivalry. (Photo credit: MONICA DAVEY/AFP via Getty … [+] Images)

For the longest time, this has been one of the biggest NFC Playoff rivalries. It’s a span of more than a quarter-century and has included both squads ending the other teams’ championship aspirations.

Most recently, San Francisco has won each of the past two playoffs games — both with Colin Kaepernick (remember him?) leading the charge. Back in January of 2012, during Jim Harbaugh’s first season as the 49ers’ head coach, Kaepernick gained 444 total yards and four touchdowns in an NFC Divisional Playoff win over Green Bay.

Just a couple years later, the now-unemployed signal caller led the 49ers into Lambeau Field and came way with a rare win over the Packers.

That’s the recent domination of these 49ers against Green Bay. Though, it did not begin that way. Starting with an NFC Divisional Playoff win over San Francisco at Candlestick back in 1996, the Pack took three of the first four in this matchup. That 1996 victory ultimately led to Brett Favre’s first and only Super Bowl title.

Though, the most memorable playoff game between these two historical franchises took place back on Jan. 3, 1999. The wildcard game included a missed Jerry Rice fumble that would have ended it in Green Bay’s favor. It ultimately led to the NFL initiating the instant replay system that’s become such a big deal in recent years.

Steve Young to Terrell Owens. The Catch 2. That’s how said game came to a conclusion, one of the greatest finishes in playoff history.

For younger fans, this rivalry might not seem like a bit deal. But for children of the 1980s and 1990s, it most definitely is. That includes a Packers quarterback who is on the opposite end after rooting for San Francisco over Green Bay throughout his childhood. 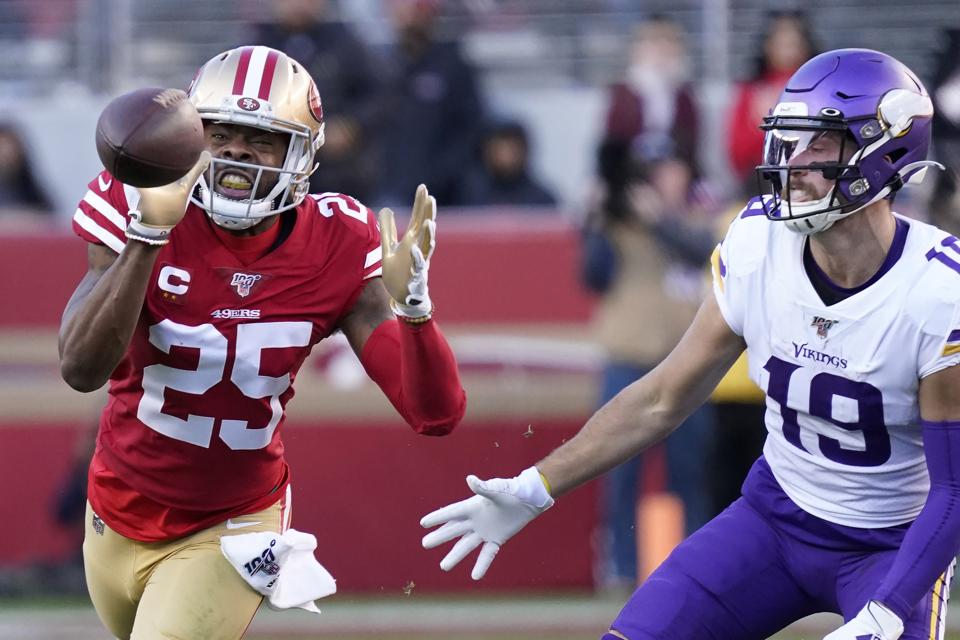 Richard Sherman is playing the best football of his career. (AP Photo/Tony Avelar)

Adams was absolutely brilliant against the Seahawks last week, recording a Packers playoff record 160 yards on eight catches. If he’s playing at this level catching passes from Aaron Rodgers, Green Bay is hard to beat.

The good news for San Francisco is that it has Richard Sherman to go up against Adams. San Francisco held Adams to 43 yards on 12 targets in its blowout 37-8 win over Green Bay back in November. Sherman has given up a total of 130 yards over the past 13 games and has has Rodgers’ number throughout their careers, holding the quarterback to a 57.7 passer rating in their meetings. 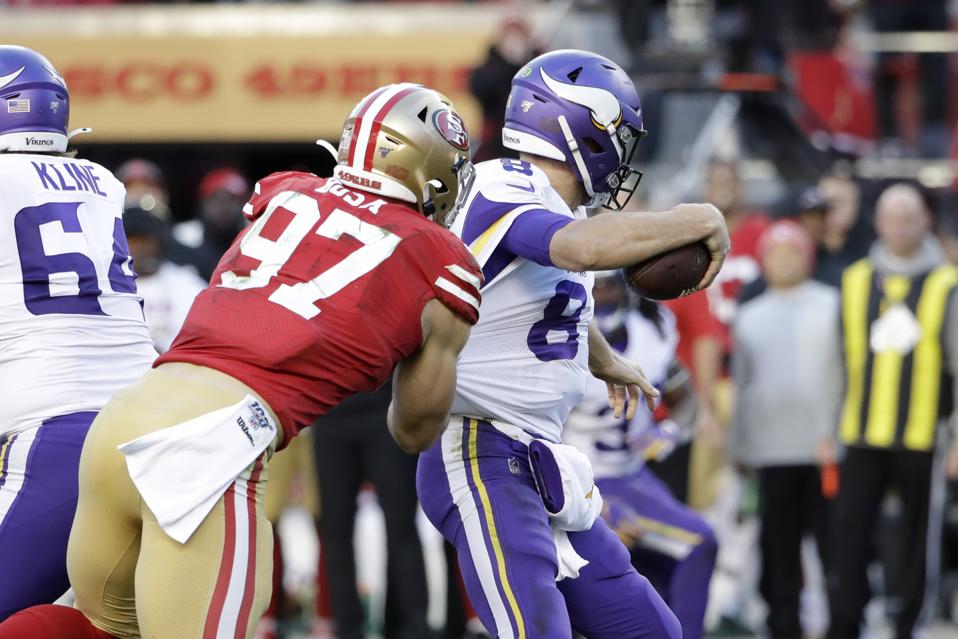 The overall numbers for Green Bay’s offensive line in front of Rodgers are not great. He’s been sacked 85 times in the quarterback’s past 32 starts. That’s almost three sacks per game. Though, that’s not on Bakhtiari. Pro Football Focus graded the left tackle out as the fifth-best player at his position during the regular season.

He’s obviously going to be up against an elite force Sunday afternoon. With Dee Ford returning to the lineup last week, Bosa recorded two sacks. The PFWA Rookie of the Year was a dominant force in every way. He also recorded a sack of Rodgers back in Week 12. If Bosa dominates, the Packers are going to have a heck of a time moving the ball. It’s that simple. 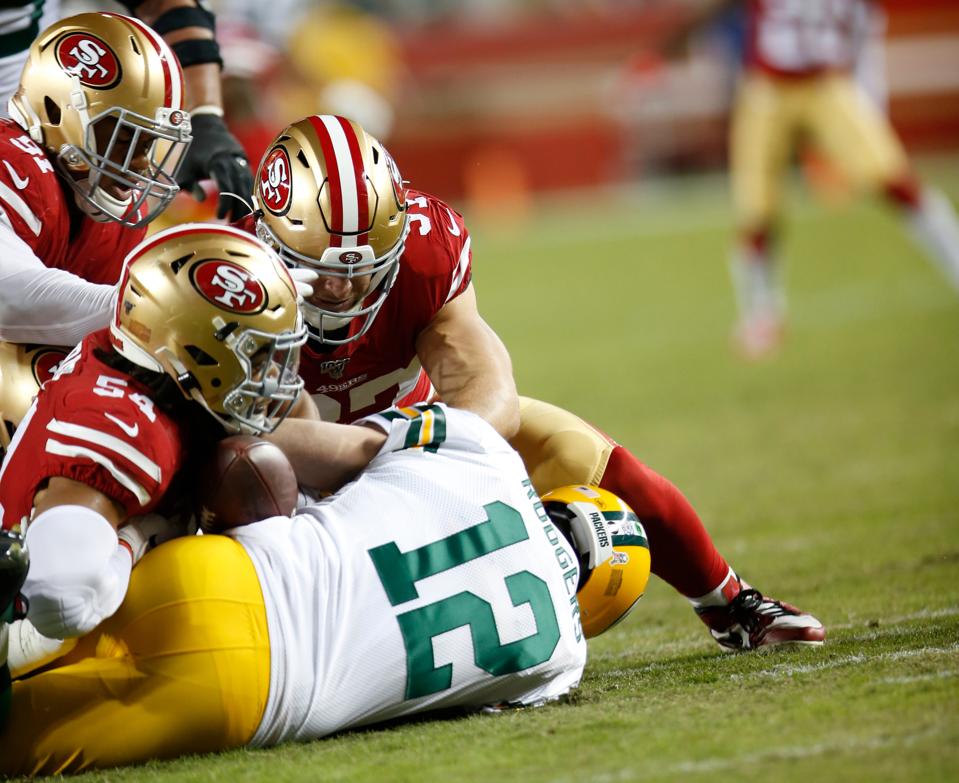 Aaron Rodgers must have a better performance than what we saw in Week 12 for the Pack to pull off … [+] the upset. (Photo by Michael Zagaris/San Francisco 49ers/Getty Images)

It’s not a well kept secret that San Francisco’s defense forced Rodgers into the worst statistical performance of his career back in Week 12. Rodgers tallied 66 net passing yards on 33 attempts (two yards per pass) in the 29-point defeat.

The interesting dynamic here is that Pro Bowlers Dee Ford and Kwon Alexander did not suit up in that game. This is not great news for the Packers heading into Sunday’s matchup. Moreover, Rodgers boasts a career 1-5 playoff record against teams he lost to that regular season. It’s certainly something to keep an eye on here. 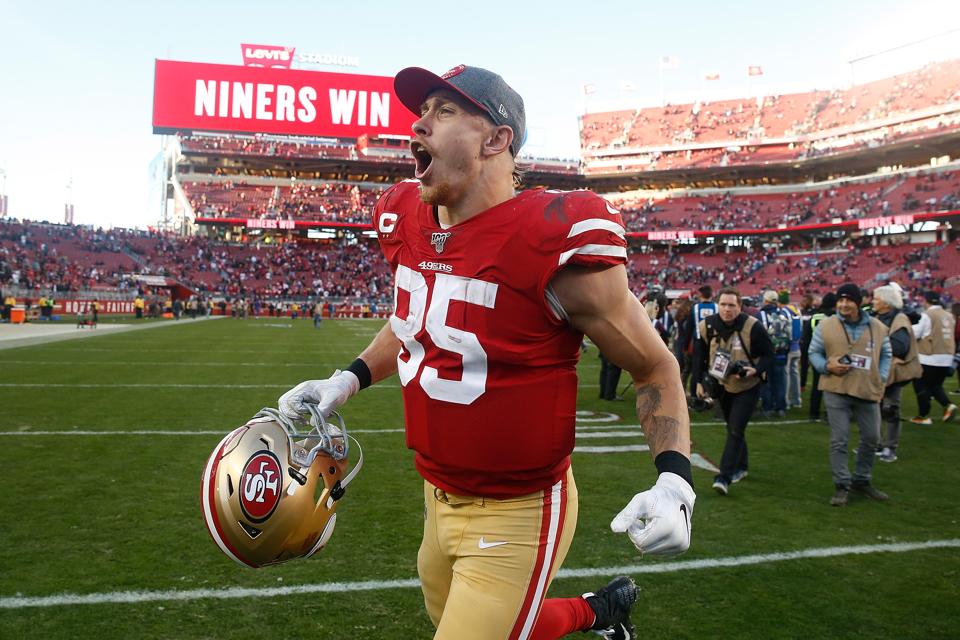 George Kittle is an X-factor in both the blocking game and the passing game. (Photo by Lachlan … [+] Cunningham/Getty Images)

Kittle’s minor ankle injury notwithstanding, his importance to the 49ers is hard to describe. Despite catching just three passes for 16 yards against the Vikings, Kittle made a heck of an impact in the blocking game against the likes of dominating edge rushers Everson Griffen and Danielle Hunter.

The All-Pro tight end will be tasked with doing the same thing against Za’Darius Smith and Preston Smith on Sunday. The two combined for eight hits and four sacks of Russell Wilson last week.

Even then, we’re highy intrigued to see if the Kittle is involved more in the passing game. Going up against Amos and Co. back in November, the record-breaking tight end caught 6-of-6 targets for 129 yards and a touchdown. Linebackers won’t be able to go up against Kittle in the NFC Championship Game, meaning that the onus is going to fall on Mr. Amos. 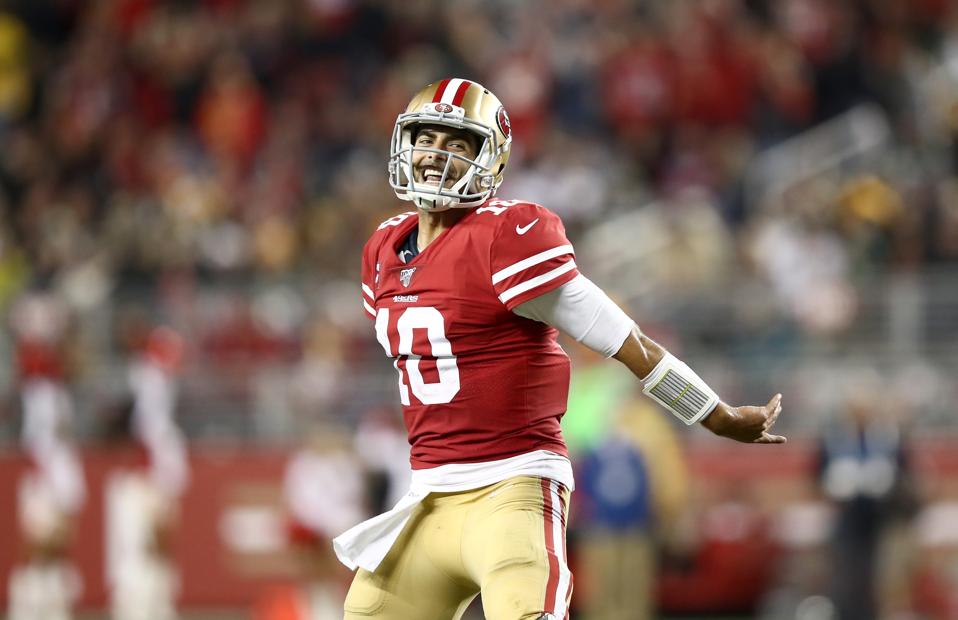 Will Jimmy Garoppolo be up for the task like we saw back in Week 12? (Photo by Ezra Shaw/Getty … [+] Images)

As noted above, San Francisco is going to need more from Garoppolo if the 49ers expect to avoid the upset on Sunday. Eleven completions just isn’t going to cut it against a Packers pass defense that was surprisingly good during the regular season.

The good news here is that Garoppolo picked apart Green Bay to the tune of 14-of-20 passing for 253 yards and two touchdowns back in November. The bad news? Garoppolo has thrown three touchdowns compared to three interceptions in his three starts at Levi’s Stadium since said game. 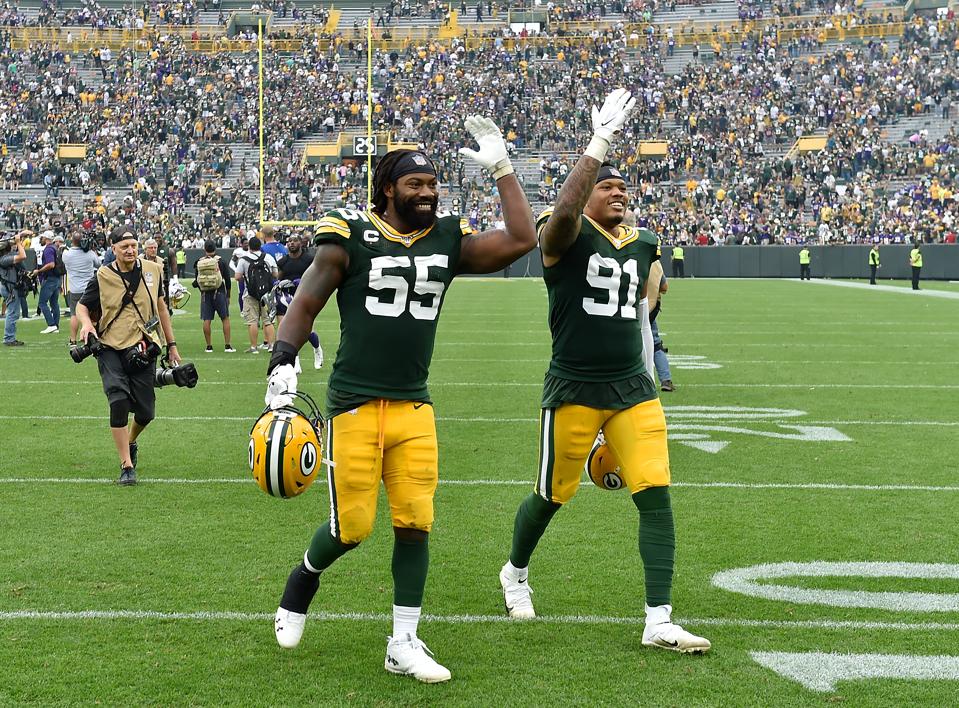 The Smith Brothers are going to be a problem. (Photo by Quinn Harris/Getty Images)

Garoppolo was hit just two more times and didn’t get sacked after the first quarter. Sure it helped that the 49ers were able to go run-heavy, but this has been the strength of the team over the past couple weeks. Four combined sacks in the past two games after Garoppolo went down six times in a Week 16 win over the Rams.

On the other side sits the Smith Bros. They have been absolutely brilliant in their first season as teammates in Green Bay. The two combined for 60 quarterbacks hits and 25.5 sacks during the regular season. This promises to be a fun matchup. 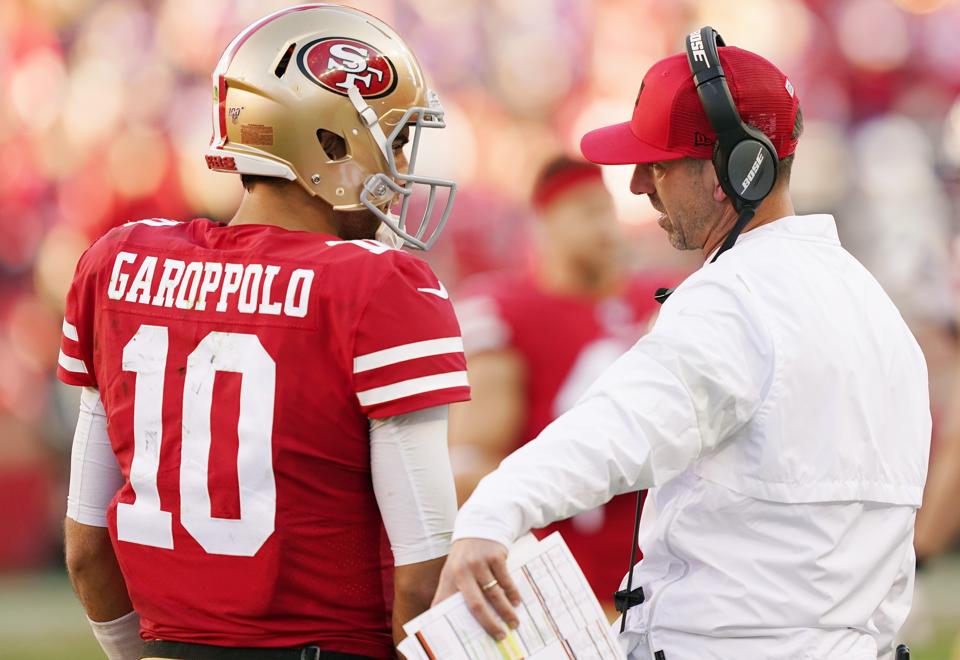 This duo will lead the 49ers to the Super Bowl, bringing back memories of Bill Walsh and Joe … [+] Montana.(Photo by Thearon W. Henderson/Getty Images)

Don’t expect San Francisco to dominate at the level we saw back in Week 12. Matt LaFleur will have his team ready to go late Sunday afternoon at Levi’s Stadium. Even then, everything is setting up for the 49ers to come out on top and earn that shocking Super Bowl appearance.

This doesn’t even take into account a front seven that returned Ford and Alexander from injury en route to an historical performance against the Vikings. Neither played in San Francisco’s 37-8 win back in November.

As long as Garoppolo avoids the turnovers and is able to put up a couple sustained touchdown drives, the 49ers will win this going away. Look for them to come out on top by double digits when all is said and done.

Are You An Average Leader Or An Enlightened Leader?