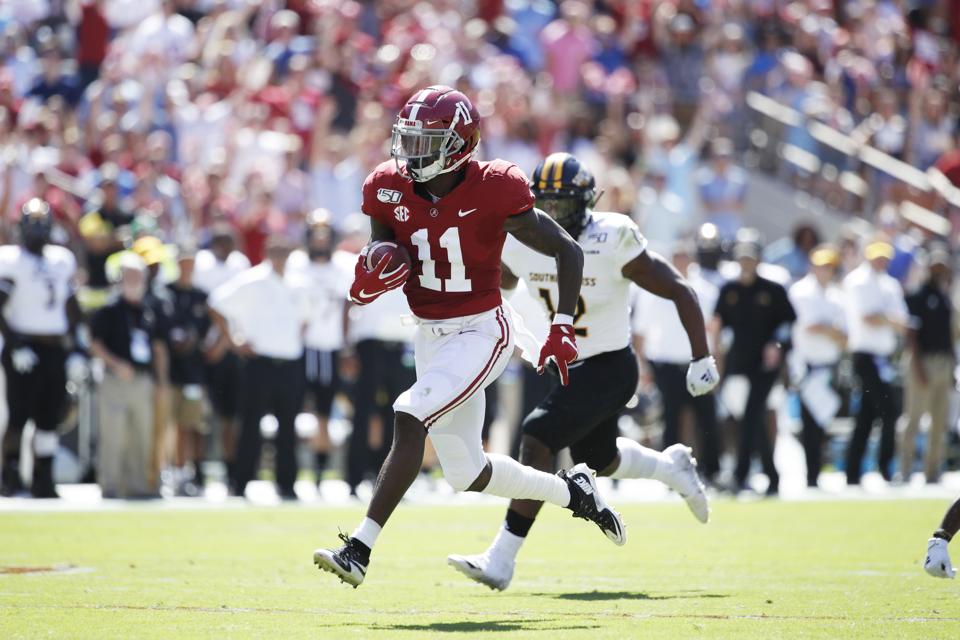 Henry Ruggs III has the game-breaking speed to fill a key need for the Vikings at the wide receiver … [+] spot. (Photo by Joe Robbins/Getty Images)

There is little doubt that the Vikings are going to address the wide receiver spot in this week’s draft. When a team loses a star receiver like Stefon Diggs in the offseason, the need to fill the position is clear.

Diggs went to the Buffalo Bills in an offseason trade, and while Minnesota picked up Tajae Sharpe from the Tennessee Titans in free agency, there is no reason to think that he is going to be able to team with Adam Thielen and give the Vikings as strong a duo at the WR spot as they had previously.

General manager Rick Spielman knows this. Sharpe can be a solid contributor for the Vikings, but he has never caught more than 41 passes for 522 yards, and he did that in his rookie season of 2016.

If the Vikings are going to put a high-quality wideout on the field opposite Thielen in the upcoming season, they are going to have to find that receiver in the draft.

Jerry Jeudy of Alabama and CeeDee Lamb of Oklahoma are the two top receivers in this year’s draft class, and neither one will be available to head coach Mike Zimmer and the Vikings with the No. 22 pick in the draft.

While there is a chance they could combine their two first-round draft picks – the other is the No. 25 selection – and move up, it seems unlikely that will happen. The Vikings have too many other holes to fill, and they need to address their pass rush, their secondary, and depth on the offensive line.

The Vikings are going to get a very talented receiver if they do the expected and select one with either of their two first-round picks.

Ruggs might have the best chance of becoming a home-run hitter in the NFL. He has brilliant speed and should be able to stretch the field immediately. Since that was one of Diggs’ greatest strengths, it only makes sense that the Vikings would like to replace him with someone with similar attributes.

Ruggs is very athletic, and can make the adjustments once the ball is in the air, and he also has the short-area quickness to break free quickly. He caught 48 passes for 746 yards and seven touchdowns with the Crimson Tide last season.

Shenault is probably the most versatile receiver because he can line up in the slot, at H-back, and even at running back. He is a brilliant open-field runner with excellent quickness and has the kind of strength to win the battle on 50-50 balls.

Aiyuk grew into his role as a starting wide receiver with the Sun Devils, and he proved to be one of the most competitive receivers in the country. He improved significantly in 2019, as he caught 65 passes for 1,192 yards and eight touchdowns. He nearly doubled his reception total from 2018, and he more than doubled his yardage and touchdowns.

The biggest improvement came in his route running and confidence. He ran crisper routes than he had in the past, and his confidence grew dramatically as he learned how to get open and make key plays.

Hamler is one of the smaller receivers in the upper level of the draft at 5-9 and 175 pounds, but he has eye-catching acceleration and a competitive fire. Hamler’s ability to slow down and then speed up has given him the ability to create separation with the defender.

He caught 56 passes for 904 yards and eight touchdowns last season, and he appears to be a big-play maker at the next level.

Higgins has the kind of impressive size at 6-4 and 215 pounds that scouts like, and he also has long speed and knows how to track down the ball and bring it into his body. While he has the ability to stretch the field, he is not the quickest receiver when making his moves, and he may not separate like some of the other top receivers in this draft.

While he should be able to catch the occasional deep pass, he is likely to have a hard time getting open on short- and medium-range pass routes.

Jefferson also has the kind of size that scouts desire at 6-3 and 190 pounds, and he is a sharp route runner who has the toughness to take the hit and remain on his feet. Jefferson was Joe Burrow’s go-to guy as the Tigers won the national championship last year, and he had monumental numbers. He caught 111 passes for 1,540 yards and 18 touchdowns last year.

Despite his brilliant success, Jefferson does not have game-changing speed. While that could be an issue for some teams, Jefferson’s hunger and productivity make him a player who could turn out to be a star at the next level.

These 25 Technology Trends Will Define The Next Decade

A Rare Covid-19 Upside: Homeowners Being Paid To Use Electricity

Can iBuyers Survive The Next Economic Downturn?

How The CEO Of Happy Family Organics –...

Buying A Car? Automakers Want You To Know...

Here’s How Raising Cane’s Plans To Keep Its...

Paving the Path to a Purposeful Hustle