Breaking
The Impact of Internships in Marketing
3 use cases of chatbots for critical services
How To Make Working From Home Appeal To...
Tips on How to Design an Office Space...
4 Tips To Help Build Amazing Customer Relationships
How Are US Pension Funds Responding to the...
Benefits of second-hand cars for your business
4 Reasons Why Your App Needs To Undergo...
Your Guide to Online Marketing
How to find a Solicitor in London
5 car tyre and safety tips for a...
Everything You Need to Know About Corporate Social...
Is Adaptive Leadership the Key to Motivating Employees?
Why business events are set to return with...
Business events set to return with a bang!
Expanding Internationally: 5 Things to Consider for eCommerce...
Home Business NFL Super Sunday Championship 10-Point Preview: Titans at Chiefs, Packers at 49ers
Business 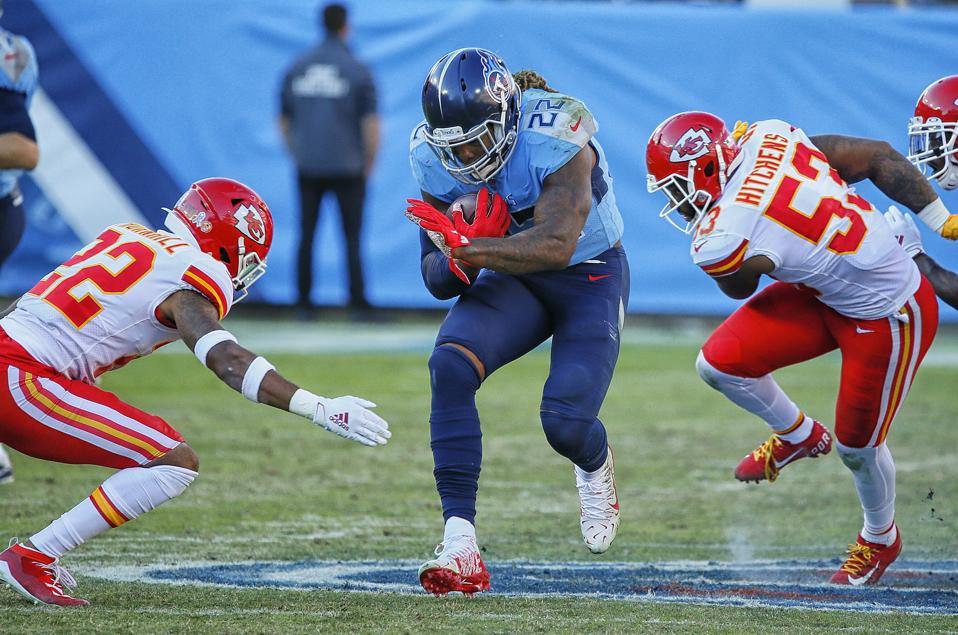 NASHVILLE, TENNESSEE – NOVEMBER 10: Derrick Henry #22 of the Tennessee Titans rushes against Juan … [+] Thornhill #22 and Anthony Hitchens #53 of the Kansas City Chiefs during the second half at Nissan Stadium on November 10, 2019 in Nashville, Tennessee. (Photo by Frederick Breedon/Getty Images)

Here are 10 things you need to know for today’s conference championships.

1. Tennessee’s upset chances will ride on the brawny shoulders of running back Derrick Henry, who has been an unstoppable force for the rampaging Titans down the stretch. This might be the most comical stat in the playoffs: Henry has rushed for 299 yards after contact in the playoffs. That’s almost as much as the total rushing yards for the next three runners’ total output in the playoffs (Minnesota’s Dalvin Cook, 112; San Francisco’s Tevin Coleman, 105, Houston’s Carlos Hyde, 92), according to Pro Football Focus. He’s averaging a ridiculous 4.67 yards after contact and forced 12 missed tackles (the next two players have forced a combined 11).

He’ll attack a Kansas City defense that ranked 29th with 4.9 yards allowed per carry. Henry rushed for 188 yards and two touchdowns as the Titans beat the Chiefs 35-32 in Week 10.

Amazingly, Henry’s 1,273 rushing yards over his last eight games would rank fifth among all players over the course of the full schedule.

“He’s not hard to hit,” Chiefs defensive end Frank Clark said of Henry told NFL Network’s James Palmer. “He’s just a big guy. 240, 245, 250, honestly he should be running harder at his weight and at his size. I don’t see no difficulty in tackling him … He’s just easy to me up front because I don’t look at any running back like they can’t be tackled. He’s not one of the best guys at breaking tackles to me, honestly.”

2. With that power running comes play-action success. Ryan Tannehill, who revived the struggling Titans, led the NFL with a 143.3 passer rating on play action. According to Pro Football Focus, the numbers are incredible: 86.0 percent accuracy, nine touchdowns, two interceptions and a league-best 13.5 yards per attempt.

“They’ve been one of the top offenses in the National Football League since he’s been in there. Everybody talks about the run game, but this guy can sling it,” Chiefs coach Andy Reid said. “He has some good guys [around him], too. He’s playing good football. Smart kid. You’re really into those stories, as long as you don’t have to play them, but he’s done a nice job.”

3. Chicks dig the long ball, as the old Major League Baseball said, and the Chiefs dig the long ball, too. With speed on the perimeter and Patrick Mahomes’ superb talent, the Chiefs thrived with a deep passing game. On passes thrown 20-plus yards downfield, Mahomes ranked first in touchdowns (13), fourth in yards (1,141) and second in passer rating (122.9).

4. To combat Mahomes, the Titans have to speed up his time clock. However, based on the rest of the season, that might not be possible. According to Sports Info Solutions, the Titans applied pressure on 31 percent of opponent dropbacks. Only Miami applied less pressure. When given a clean pocket, Mahomes’ completion percentage is 72 percent, he averages 9.1 yards per attempt and he has a passer rating of 117.1. When pressures, those fall to 52 percent, 6.7 and 96.4.

5. Games are won and lost in the red zone. Defensively, Tennessee was a woeful 31st with an opponent touchdown rate of 68.1 percent. Offensively, despite all of their firepower, the Chiefs ranked 20th with a red-zone touchdown rate of 54.0 percent. In last week’s prodigious comeback, Mahomes threw five red-zone touchdown passes. According to STATS, the first four came of those came in a span of 9 minutes, 11 seconds of the second quarter as he became the first player in postseason history with four touchdown passes in a quarter since Washington’s Doug Williams against Denver in the 22nd Super Bowl on Jan. 31, 1988.

“We’re going to put the pressure on ourselves to find a way to win it,” Mahomes said of the Chiefs’ 50-year streak without a Super Bowl appearance. “When you fall that short and that close last year, the next step is to get to the Super Bowl. We understood that going into this season and we know it’s a long season. We know it’s a process. We know that day by day we have to get better. I think that’s what this team is great at, just getting better every single day and then going out and fighting until the end in every single opportunity we get.” 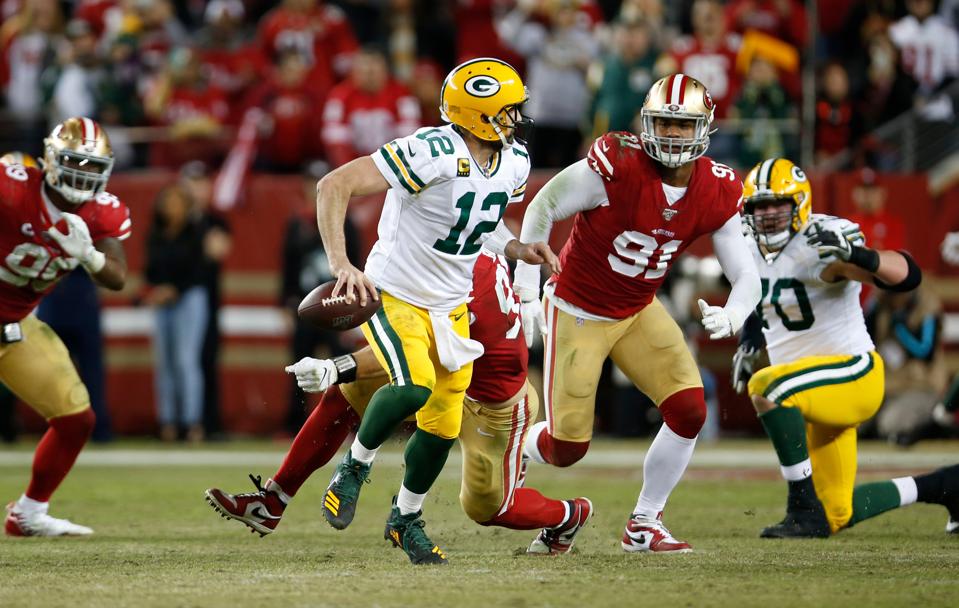 6. In last week’s divisional round, San Francisco ran over and through the vaunted Minnesota defense. The Niners ran the ball 47 times, and while their 4.0-yard average wasn’t impressive, the consistent production was the key to the game. For the 49ers, their effective running game opens the door to play-action passes. This season, Garoppolo used play-action on 31.9 percent of his dropbacks (fourth-most) and threw for 1,667 yards (second-most), according to Pro Football Focus.

“The Niners are one of the best at marrying up their runs to their play passes, where there are some other teams that will fake a run that doesn’t exist,” Packers defensive coordinator Mike Pettine said. “Where I think (the 49ers) do a really good job each week of, these are our runs and these are the passes off of it. Their offense is all about fooling your eyes, and that’s why they operate at such a high level. You have to be so disciplined with what’s my key, what am I looking at. All the other stuff that’s flying around your key, you have to make sure you stay locked in.”

7. In last week’s divisional game over Seattle, Packers receiver Davante Adams caught eight passes for 160 yards and two touchdowns. The yardage mark was the most in Packers playoff history. Adams will be wearing the defensive bull’s-eye for 49ers defensive coordinator Robert Saleh. In matchups vs. No. 1 receivers, the 49ers have been superb all season in allowing a league-low 55 receiving yards per game.

“He’s very strong, he’s a very good route runner, he’s got great hands,” 49ers defensive coordinator Robert Saleh said. “He’s got a salty to him where he’s really good in double moves. He just kind of lulls you to sleep. But, he’s savvy, and him and Aaron have a really good relationship. They’ve got a good rapport with one another, so they’re very comfortable. They know where each other is going to be. Just the whole combination of the routes they have for him and all the different things they ask him to do, it’s a good match.”

8. Garoppolo doesn’t go deep often but, when he does, he’s been effective. According to Pro Football Focus, he ranked just 30th in passes thrown 20-plus yards downfield. However, he completed 20 of those for 673 yards with seven touchdowns, three interceptions and a 106.8 passer rating. According to Sports Info Solutions, the Packers ranked 23rd in deep-ball completion percentage (43.0) and 22nd in passer rating (94.6).

9. When the 49ers crushed the Packers 37-8 in Week 12, Green Bay went 1-for-15 on third-down plays. That was its worst day since 2000 and the third-worst day in the league this season. It was 0-for-14 until backup quarterback Tim Boyle converted with 1 minute remaining. For the season, Green Bay’s offense ranked 23rd on third down (36.0 percent) while San Francisco’s defense ranked second (33.3 percent). The Packers were 9-of-14 against Seattle, that 64.3 percent success rate being their best all season.

Interestingly, according to STATS, on third-and-long (8-plus yards), Garoppolo moved the chains 36.8 percent of the time, which ranked second in the league. Rodgers was 15th (29.0 percent).

10. Last week against Minnesota, the Niners’ five first-round picks on the defensive line all had one sack. San Francisco’s front dominated the first matchup. Can Green Bay’s healthy offensive line give Aaron Rodgers time? According to Sports Info Solutions, Rodgers completed 69 percent of his passes with a 101.2 passer rating when not facing pressure. Those numbers fell to 46 percent and 80.9 when pressured.

After Interviewing A Trumpian Autoworker, I Sought Guidance In My Lincoln Bookshelf

This Colombian Scientist Hunts The World’s Most Valuable Resource: Water!