Breaking
The Impact of Internships in Marketing
3 use cases of chatbots for critical services
How To Make Working From Home Appeal To...
Tips on How to Design an Office Space...
4 Tips To Help Build Amazing Customer Relationships
How Are US Pension Funds Responding to the...
Benefits of second-hand cars for your business
4 Reasons Why Your App Needs To Undergo...
Your Guide to Online Marketing
How to find a Solicitor in London
5 car tyre and safety tips for a...
Everything You Need to Know About Corporate Social...
Is Adaptive Leadership the Key to Motivating Employees?
Why business events are set to return with...
Business events set to return with a bang!
Expanding Internationally: 5 Things to Consider for eCommerce...
Home Sport NFL Week 12 Super Six Preview: Packers at 49ers Headlines Three Heavyweight Showdowns
Sport 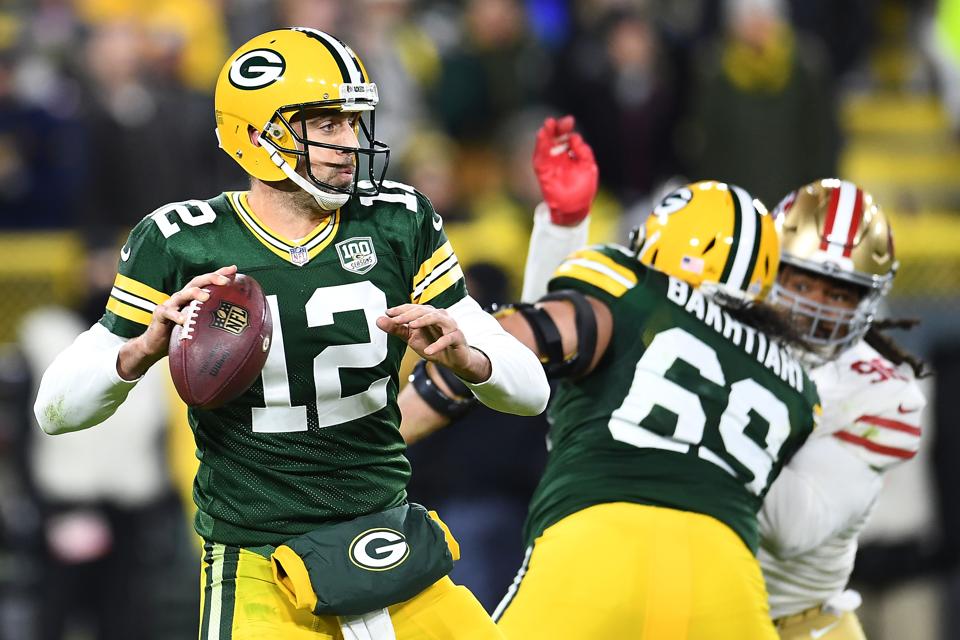 GREEN BAY, WI – OCTOBER 15: Aaron Rodgers #12 of the Green Bay Packers drops back to pass during a … [+] game against the San Francisco 49ers at Lambeau Field on October 15, 2018 in Green Bay, Wisconsin. Green Bay defeated the San Francisco 33-30. (Photo by Stacy Revere/Getty Images)

Here are the six biggest games of the 12th weekend of the NFL season.

This game will feature two players on incredible paces.

New Orleans bounced back from an awful home loss to Atlanta by beating Tampa Bay 34-17 last week. In 10 games, Saints receiver Michael Thomas has caught an NFL-record 94 passes. He needs six receptions to become the eighth player in NFL history with three consecutive seasons of 100-plus catches.

It’s probably do or die for the Panthers, who have dropped three of their last four after a four-game winning streak. Carolina has turned over the ball 10 times and averaged just 15.5 points during their skid. The slump has potentially derailed running back Christian McCaffrey’s MVP candidacy, even though last week he became the first player in NFL history with 1,000 rushing yards and 500 receiving yards in the first 10 games of the season. He has 1,576 yards from scrimmage this season – a whopping 45.5 percent of the team’s total.

New Orleans will test McCaffrey with the league’s third-best run defense. “When you feel really good about the way those guys are playing, to me, it just kind of permeates throughout the rest of the unit because they feel that and the impact those guys up front make,” Panthers coach Ron Rivera said of the Saints’ front four. 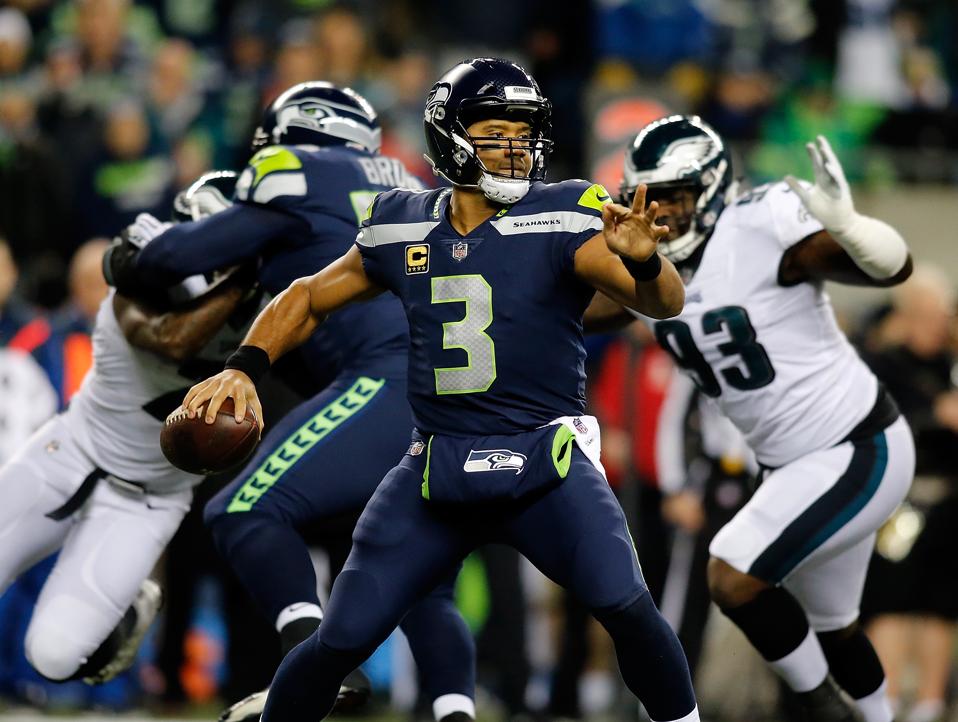 SEATTLE, WA – DECEMBER 03: Quarterback Russell Wilson #3 of the Seattle Seahawks in action against … [+] the Philadelphia Eagles at CenturyLink Field on December 3, 2017 in Seattle, Washington. (Photo by Jonathan Ferrey/Getty Images)

In a big overtime victory over the 49ers before last week’s bye, Seattle quarterback Russell Wilson directed his fifth game-winning drive of the season. In his past nine road games, he’s authored a passer rating of 123.5. He’s one of the MVP front-runners.

“Just watching him as a player and his ability to create is something that I really admire,” Eagles quarterback Carson Wentz said. “His athleticism is something I tried to implement in my game a little bit. But at the same time, we’re different players. He’s way quicker than I am, way faster than I am, but a lot of respect for how he can improvise and make plays.”

The Seahawks have won each of the four matchups by 10-plus points. They’re coming off back-to-back overtime victories, and seven of their eight victories have come by seven points or less.

“I think the great thing about this game for our football team was just the resilience,” Wilson said. “We’ve had it all year. We’ve been, I think, the toughest team just in terms of resilience all year, in my opinion. Just how we stay encouraged, how we stay focused, how we keep having the faith and believe something great is going to happen.”

This is a must-win in the AFC South to keep pace with the first-place Texans, who improved to 7-4 with a victory over Indianapolis on Thursday.

Running backs will take center stage. For the Titans, Derrick Henry rushed for 188 yards and two touchdowns in an upset of the Chiefs before last week’s bye. The last time these teams met in Tennessee, Henry rushed for 238 yards and four touchdowns – including a 99-yarder. He’ll attack what’s been a tissue-soft run defense. The Jaguars gave up 264 rushing yards in last week’s 33-13 loss to Indianapolis.

For the Jaguars, Leonard Fournette is one of three running backs with 750-plus rushing yards and 250-plus receiving yards. However, he carried the ball only eight times in the blowout loss to Indianapolis. Fournette has 1,185 scrimmage yards – the most in 10 games in franchise history – but he and Tiki Barber (Gants, 2006) are the only players in NFL history with 1,000-plus scrimmage yards but no more than one touchdown in the first 10 games, according to STATS.

The Titans, who have won five straight at home in the series, have scored 10 consecutive red-zone touchdowns.

“It’s exciting,” Dallas quarterback Dak Prescott said. “You talk about wanting to win championships. You’ve got to beat the people that have won.”

The matchup of Prescott vs. New England’s pass defense will be fascinating. Prescott leads the NFL with 3,221 passing yards and 8.82 yards per attempt, is second with 21 touchdowns and is eighth with a 104.2 passer rating. Meanwhile, the Patriots are first in the NFL by a mile with an opponent passer rating of 49.2. That’s a whopping 23 points better than second-place San Francisco.

“They’re at the top of the league for a reason,” cornerback Stephon Gilmore said. “It’s a big challenge. And I’m looking forward to it.” 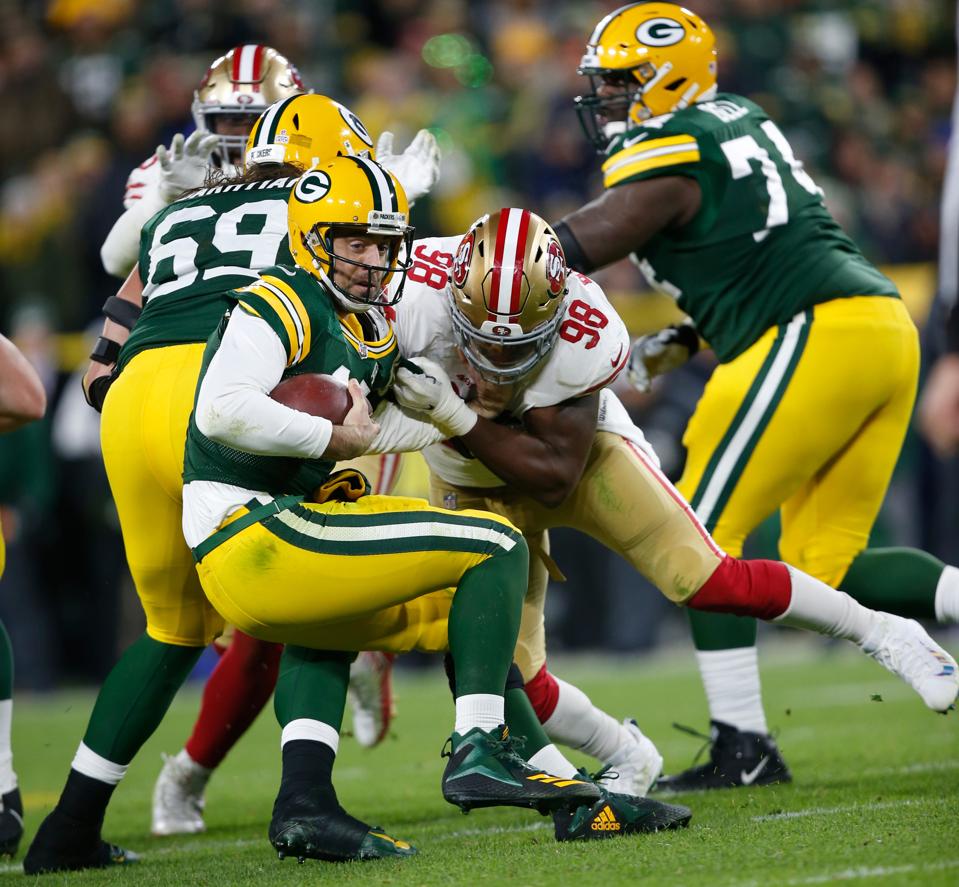 There are six games left in the season, but the No. 1 seed in the NFC playoffs could be at stake. That, however, is just one of the storylines in the Game of the Week. San Francisco coach Kyle Shanahan and Green Bay coach Matt LaFleur are close friends. LaFleur and San Francisco defensive coordinator Robert Saleh were roommates while coaching at Northern Michigan. LaFleur’s brother, Mike, is the 49ers’ passing game coordinator.

“I texted Saleh earlier this week on Monday,” LaFleur said. “I asked him to give me a call because I had a couple of questions about his defense. That’s what you do with close friends of yours. As a matter of fact, shoot, my wife was out to dinner with Kyle’s last night. We’re close but when it comes to game time, there are no friends. That’s your opposition and you’re trying to beat the crap out of each other, really.”

Packers quarterback Aaron Rodgers will face a 49ers defense that ranks No. 1 against the pass and sack percentage and is No. 2 in opponent in passer rating.

“Just a really solid defense,” Rodgers said. “They’re obviously very stout up front. They’ve had a number of sacks, which is obviously helping not only their overall yardage but the back end, as well, because the back end knows the ball’s got to come out at a certain time. There’s not any holes on this defense. It’s solid from the front seven to the back end. They’re playing really well together. It’s going to be a really good test for us.”

Niners quarterback Jimmy Garoppolo will face one of the weaker pass defenses in the league. He ranks among the league leaders in completion percentage but also has thrown 10 interceptions and lost four fumbles.

“That’s just part of being a quarterback,” he said. “In football, bad things are going to happen at some point. No one’s ever going to play a perfect game, so it’s just how you react to those things.” 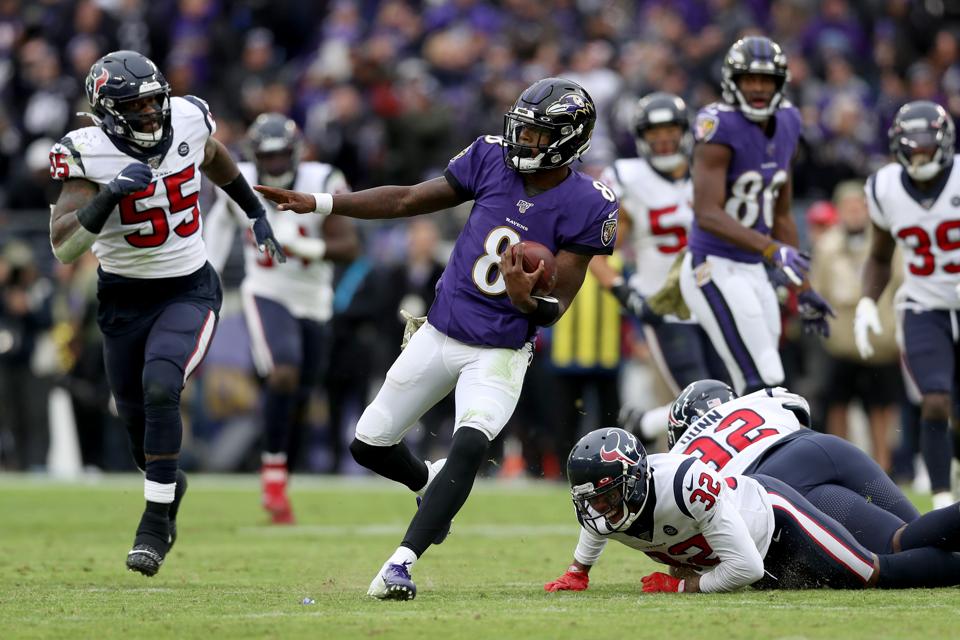 BALTIMORE, MARYLAND – NOVEMBER 17: Lamar Jackson #8 of the Baltimore Ravens rushes for a first down … [+] in the third quarter against the Houston Texans at M&T Bank Stadium on November 17, 2019 in Baltimore, Maryland. (Photo by Rob Carr/Getty Images)

Last year, it was the Rams that took the NFL by storm. This year, it’s the Lamar Jackson-led Ravens.

Jackson has emerged as the front-runner for MVP honors. He’s made big plays through the air and with his legs. He’s rushed for 781 yards, putting him on pace for 1,250. The quarterback rushing record belongs to Michael Vick, who rushed for 1,039 yards in 2016.

Rams safety Eric Weddle was with the Ravens last season when Jackson was a rookie.

“Lamar, love him and know the type of person he is, so it’s like the proud big bro watching him from afar, the success he’s having,” Weddle said, adding, “It’s going to be a huge challenge for us. You can play defense great and be perfect, but he’s the X factor. You can’t get down when he does make some plays or converts third down just by being him. You’ve just got to keep plugging along. But, shoot, we love the challenge, man. This is what it’s all about, and we get them at home.”

The Rams’ defense, however, is one of the best in the NFL. In terms of yards per play, Los Angeles is second against the run and fifth against the pass. It’s allowed just 44 points the past four games. That unit is led by defensive tackle Aaron Donald, the two-time NFL Defensive Player of the Year.

With Guaido Out, Who Will Be Washington’s ‘President’ Of Venezuela Now?