Breaking
Renewables And Energy Storage Are Surging In Red...
Bitcoin’s Richest Are Selling, So Why Is The...
Apple’s iPhone 12 Will Cause Serious Problems For...
Rock Royalties – How A European Startup Is...
4 Differences Between Creative and Marketing Agencies
A Meeting Is A Gathering: The Most Common...
IRS Tax Extension To Jan. 15 For California...
Senate GOP Pushes Through Democratic Filibuster To Advance...
How These Successful Entrepreneurs Learned To Adapt And...
Six Ways Tax Rates Go Up For Retirees
How ‘Mario Kart Live: Home Circuit’ Straddles The...
6 Tools To Bring Your Virtual Conferences To...
COVID-19 And The Future Of Aging: Prospects For...
Harman’s New Citation MutiBeam 700 Is A Feature-Packed...
A Startup Raises $11 Million Using Zoom, A...
Is Your Business Stagnant? It Might Be Time...
Home Business NFL Week 15: 49ers Fall Flat Against Falcons, Clinch Playoff Spot
Business 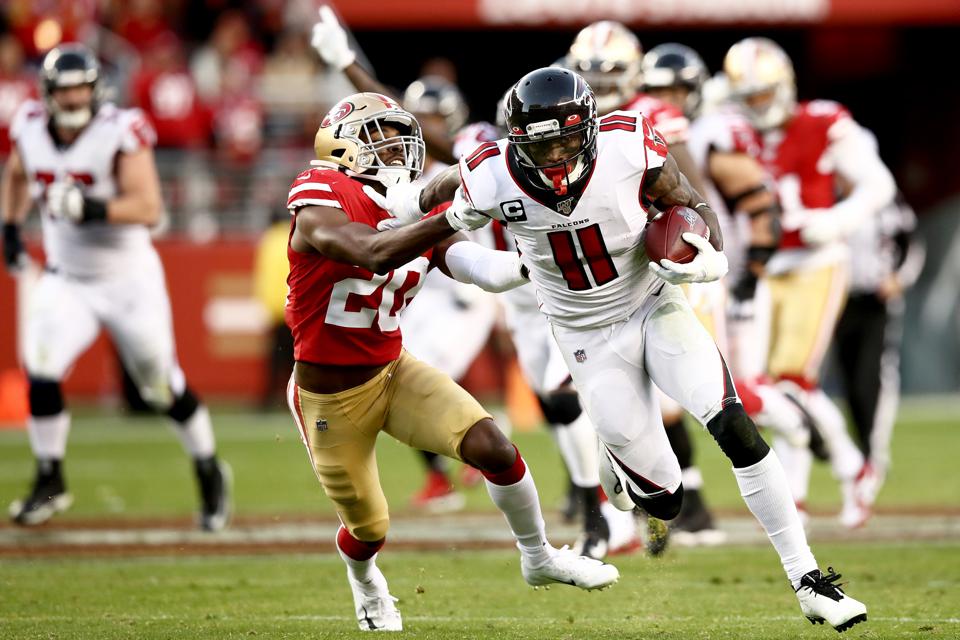 The San Francisco 49ers fell flat in horrible 29-22 loss to the Atlanta Falcons on Sunday. (Photo … [+] by Ezra Shaw/Getty Images)

The San Francisco 49ers on Sunday clinched their first playoff appearance since the 2013 season. It did not come in the fashion that head coach Kyle Shanahan and Co. had envisioned.

San Francisco fell to the Falcons by the score of 29-22 after failing to maintain a two-score lead in the fourth quarter. At about the same time, the Dallas Cowboys were blowing out the Los Angeles Rams. The end result was a somber 49ers locker room at Levi’s Stadium, even after Dallas helped them cinch a playoff spot.

Coming off the most difficult four-game stretch in NFL history, San Francisco simply did not show up against what was a four-win Falcons team. Jimmy Garoppolo was off the mark all game after earning NFC Offensive Player of the Week honors.

Defensively, the 49ers were missing more than half of their starters. It showed big time with Julio Jones going off for 13 receptions, 134 yards and two touchdowns. That included the game-winner as time expired.

Said play was initially called short of the end zone, which would have led to a narrow 49ers win. After further review, officials on hand at Levi’s Stadium rightfully overturned the ruling and gave Atlanta the impressive upset win.

Here’s what we learned from the 49ers’ third loss of the season.

Injuries Had A Major Impact

Falcons quarterback Matt Ryan entered Sunday’s game on pace to be sacked about 50 times this season. San Francisco got to him for just two sacks in the narrow loss. It’s rather evident that the team was missing Pro Bowl edge rusher Dee Ford and stud defensive tackle D.J. Jones on this one.

Without a consistent pass rush, Emmanuel Moseley struggled in his role as the team’s No. 1 corner with Richard Sherman sidelined. He was eaten alive throughout the game.

At this point in the season, every team is dealing with injuries. They can’t be used as an excuse. But San Francisco was impacted big time with star players at every tier sidelined on defense. That’s for sure.

George Kittle Is A Man Among Boys

A week after pretty much winning the game against New Orleans, Kittle was back up to his old tricks against Atlanta. The NFL’s best tight end recorded a career-high 13 receptions for 134 yards on 17 targets. In fact, Kittle was targeted a whopping 10 consecutive times by Jimmy Garoppolo in the second half.

Sure a fumble late in the fourth quarter that prevented Kittle from getting a game-clinching first down impacted his overall performance.

That’s fine. Mistakes will be made. However, Kittle dominated in both the passing game and as a blocker. He seems to be getting better as the season progresses. That’s great news heading into the playoffs.

Jimmy Garoppolo Didn’t Have It 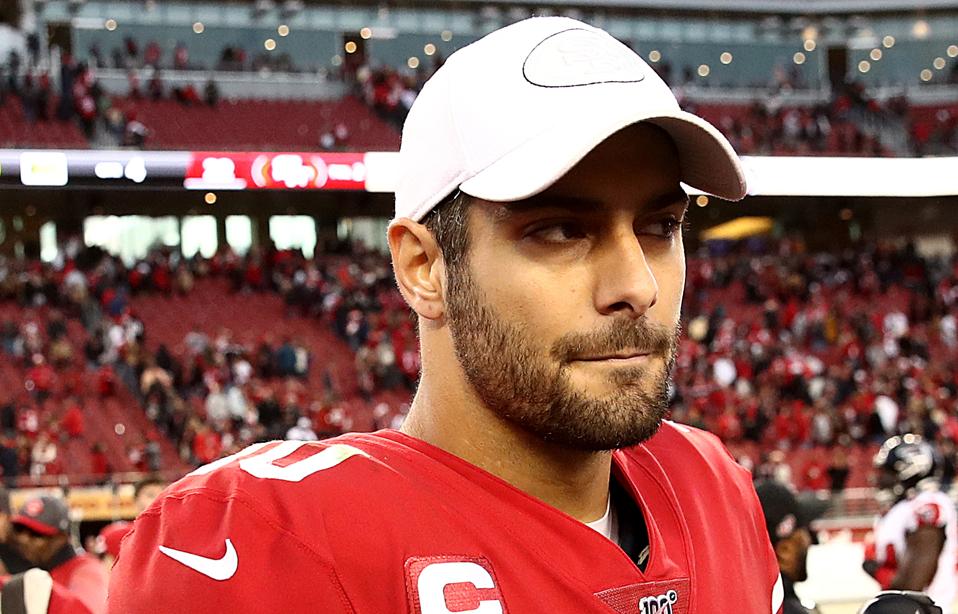 A week after putting up a stirring performance, Jimmy Garoppolo did not have it against the Falcons. … [+] (Photo by Ezra Shaw/Getty Images)

One week after going tit-for-tat with Drew Brees, Garoppolo struggled big time. He completed just nine passes to players not named George Kittle. All said, Garoppolo was erratic throughout the afternoon. He consistently missed open receivers and struggled reading the field against what had been a bad Falcons pass defense.

When all was said and done, Garoppolo completed 22-of-34 passes for just 200 yards with a touchdown and zero interceptions. Simply put, he’s going to have to be better moving forward if the 49ers are going to have any shot at hoisting their sixth Lombardi.

As mentioned above, San Francisco was able to clinch its first playoff spot with the Rams loss to Dallas. While Sunday’s loss was among their ugliest performances of the season, it had very little impacts on the playoff race.

The 49ers still control their own destiny. If they win out, the 49ers will be the No. 1 seed and boast home-field advantage throughout the NFC Playoffs. The one impact that this loss had is the 49ers’ current status as the No. 5 seed in the conference. They entered Week 15 with the top seed.

Assuming San Francisco is able to rebound against the Rams at home next Saturday night, Week 17 in Seattle will be for all the marbles in the NFC West and the conference as a whole.

WWE TLC 2019 Results: The 5 Biggest Takeaways From An Average Pay-Per-View