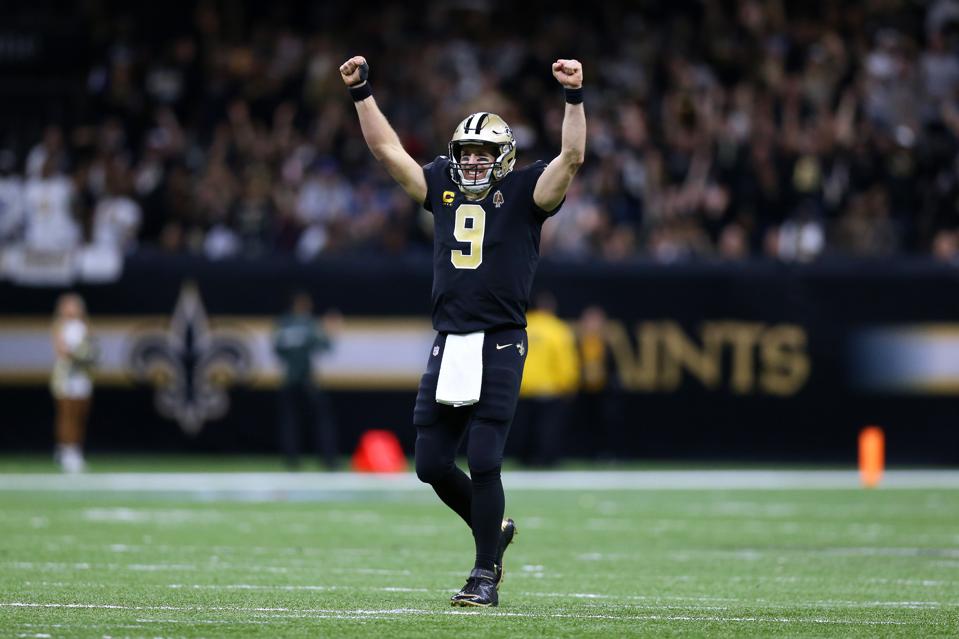 NEW ORLEANS, LOUISIANA – DECEMBER 16: Drew Brees #9 of the New Orleans Saints reacts against the … [+] Indianapolis Colts during a game at the Mercedes Benz Superdome on December 16, 2019 in New Orleans, Louisiana. (Photo by Jonathan Bachman/Getty Images)

Here are the best games from the 16th weekend of the NFL season, continuing with the Sunday and Monday lineup. (Click here for Saturday’s games.) All times are Eastern.

The Saints are in the thick of the chase for home-field advantage in the NFC, part of a four-way logjam of teams with 11-3 records. They’ll be tested by the elements, with a predicted high in the low 50s. The dome-loving Saints haven’t had anything resembling a bad-weather game all season, with four consecutive games and six of the last seven played indoors.

That’s good news for the Titans, because Saints quarterback Drew Brees has been dominant indoors. Last week against Indianapolis, Brees did more than break Peyton Manning’s NFL career record for touchdown passes. He also set a single-game record by completing 96.7 percent of his passes – going 29-of-30 for 307 yards and four touchdowns. Brees ended the game with 22 consecutive completions; Nick Foles holds that record with 25 straight last year while with the Eagles.

Brees’ favorite target, receiver Michael Thomas, has 133 receptions this season. The NFL record is held by Hall of Famer Marvin Harrison, who had 143 receptions in 2002. That means Thomas needs 10 catches the last two weeks to tie the record; Thomas has a league-record eight consecutive games with 10-plus catches.

Brees is No. 1 in the NFL with a 115.3 passer rating. Tennessee’s Ryan Tannehill is No. 2 with a 114.6 rating. Titans running back Derrick Henry has 826 scrimmage yards and nine total touchdowns in his last six games. AJ. Brown leads all rookies with 893 receiving yards. He’s gone over 100 yards in three of his last four games with four touchdowns during that span.

Brees, who once upon a time was traded from the Chargers to the Saints, respects what Tannehill has done after being traded by Miami in March.

“It’s kind of like reestablishing the foundation, but you’re also drawing on your experiences as a starting quarterback,” Brees said. “I mean, how many games did Ryan Tannehill start prior to arriving in Tennessee? He’s an experienced veteran quarterback. New environment, new system and yet you’re bringing some experience and wisdom along with it, and that’s a big deal.” 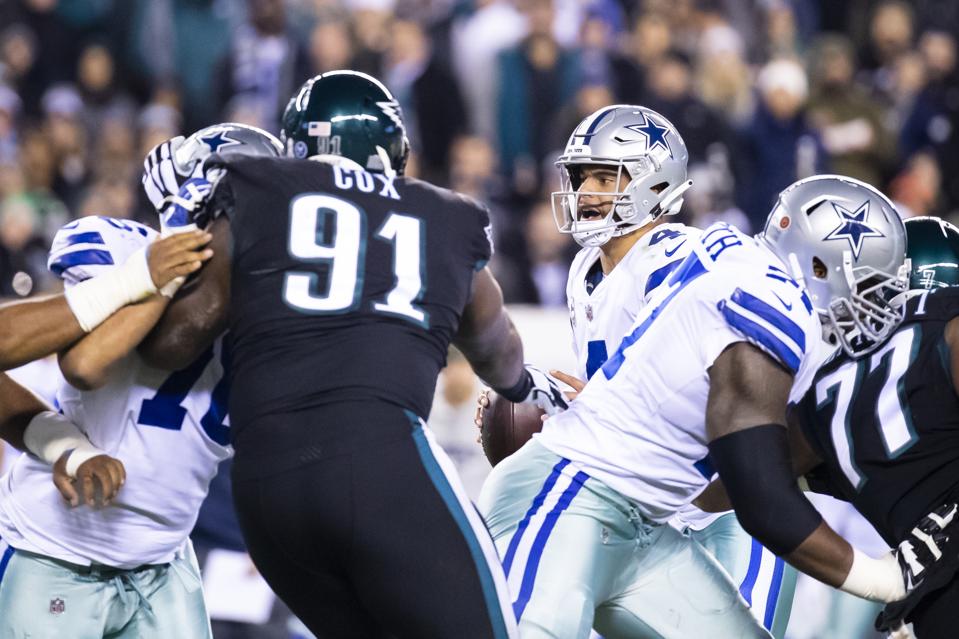 PHILADELPHIA, PA – NOVEMBER 11: Dak Prescott #4 of the Dallas Cowboys drops back to pass against … [+] the Philadelphia Eagles at Lincoln Financial Field on November 11, 2018 in Philadelphia, Pennsylvania. (Photo by Brett Carlsen/Getty Images)

Someone’s got to win the feeble NFC East. If the Cowboys beat the Eagles for a fifth consecutive time, they will clinch the division. If the Eagles win, they will be in the driver’s seat headed into Week 17.

Both teams are coming off wins. Dallas righted the ship by crushing the Rams last week. Dak Prescott, who threw for two touchdowns and posted a 123.8 rating against Los Angeles, is going for his fourth consecutive game against Philly with a rating of at least 100. Ezekiel Elliott’s also done well against the Eagles. In five career games, he’s topped 140 scrimmage yards each time.

Prescott will play despite an injured shoulder. “He’s as tough as they come,” Dallas coach Jason Garrett said. “His physical toughness and mental toughness are on par with anybody I’ve been around and that’s just what he’s all about. He handles success. He handles adversity. He handles issues as well as anybody.”

The Eagles rallied past Washington last week behind Carson Wentz, who threw for 266 yards and three touchdowns. He completed 11 of 11 passes in the fourth quarter. In six career games against Dallas, he’s thrown 11 touchdowns vs. two interceptions. Philadelphia is minus-6 on the season in turnovers, and Wentz is a big reason for that. While Wentz has been hot as a passer, he’s been a fumbling machine, with 12 fumbles (five lost) in the last seven games. He lost two fumbles in a 37-10 loss at Dallas in Week 7.

“When I’m moving in the pocket, I’ve got to keep two hands on the ball and be more cognizant of who and what’s around me,” Wentz said.

Dallas has done more than win four in a row in the series. It’s 8-2 in its last 10 trips to Philadelphia. To continue that success, the magic number is 25. When Dallas scores 25-plus points this season, it is 7-0. When it scores less than 25 points, it is 0-7. 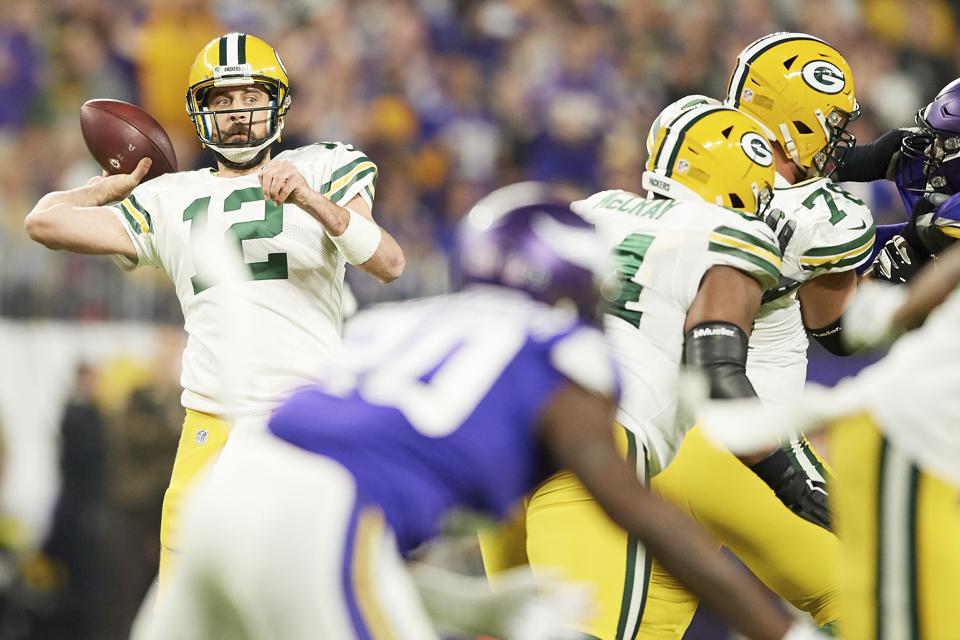 MINNEAPOLIS, MN – NOVEMBER 25: Aaron Rodgers #12 of the Green Bay Packers passes the ball against … [+] the Minnesota Vikings during the game at U.S. Bank Stadium on November 25, 2018 in Minneapolis, Minnesota. (Photo by Hannah Foslien/Getty Images)

The Packers can win the NFC North and take a huge step toward earning a first-round bye by knocking off the rival Vikings. It won’t be easy. Minnesota is 6-0 at home this season and 3-0 against Green Bay at U.S. Bank Stadium.

The challenge will fall on Green Bay’s offense, which ranks 25th in the league by averaging 19.2 points the last six games. Minnesota’s defense is allowing only 14.2 points per game at home and will challenge Packers quarterback Aaron Rodgers, who has sub-100 passer ratings in five of his last six games following a midseason hot streak.

“This is why we play the games, for times like these,” Rodgers said. “To go on the road in a hostile environment and have a chance to lock up the North with a win. Everybody will be ready to roll. ‘Monday Night Football’ adds a little extra to it, I’m sure. It’s going to be one of those old-fashioned NFC North contests.”

The Vikings can clinch a playoff berth with a win but will have to do so with a beat-up backfield, with leading rusher Dalvin Cook (1,135 rushing yards, including 154 in Week 2) out and top backup Alexander Mattison questionable. That rushing game fuels one of the most lethal play-action attacks in the league. On play-action, quarterback Kirk Cousins is No. 1 in the league in completions and touchdowns and No 3 in passer rating and yards. In four career games against Green Bay, he has averaged 343 passing yards.

Both teams have dominated the turnover table. Green Bay is plus-14 while Minnesota is plus-11.

“I like this team. I like how they’re playing,” Vikings coach Mike Zimmer said. “I think we’re doing a good job scheming offensively. Defensively, we’ve played a little bit better the last couple of weeks. If we can ever get it to the point where I really feel good about it, we could do some damage.”

Budenholzer, The Man Who Could Have Been Fizdale, On Top Of The World With Greak Freak And Bucks

What Is The Floor Price For Oil?

India Failing To Make Progress In Its Campaign...

Michael Malone’s Extension Through 2022-23 Should Secure His...