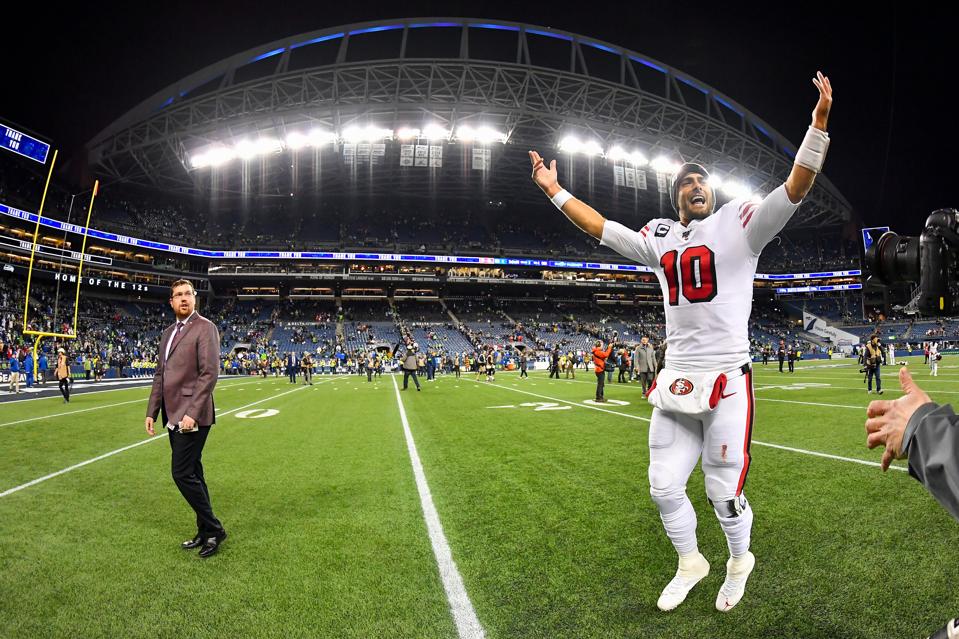 Jimmy Garoppolo and the San Francisco 49ers took out the Seattle Seahawks in dramatic fashion. … [+] (Photo by Alika Jenner/Getty Images)

The stage was set for Super Bowl winning quarterback Russell Wilson to break the San Francisco 49ers’ hearts once again.

Down by five in the last few seconds after leading his Seattle Seahawks to three second-half touchdown drives, Wilson seemingly hit tight end Jacob Hollister for the game-winning touchdown on fourth down.

That’s when rookie 49ers linebacker Dre Greenlaw had other ideas. He stopped Hollister inches short of the goal line to preserve a 26-21 49ers win, the NFC West title and home-field advantage throughout the playoffs.

This might have been the 49ers’ biggest play since the 2012 NFC Divisional Playoffs against the New Orleans Saints. It sets the stage for the playoffs to go through Levi’s Stadium. This is absolutely huge in that a loss would have forced Kyle Shanahan’s squad to play in Philadelphia against the Eagles during Wild Card Weekend.

Here, we take a look at what transpired at CenturyLink in Seattle Sunday evening and what it means moving forward. 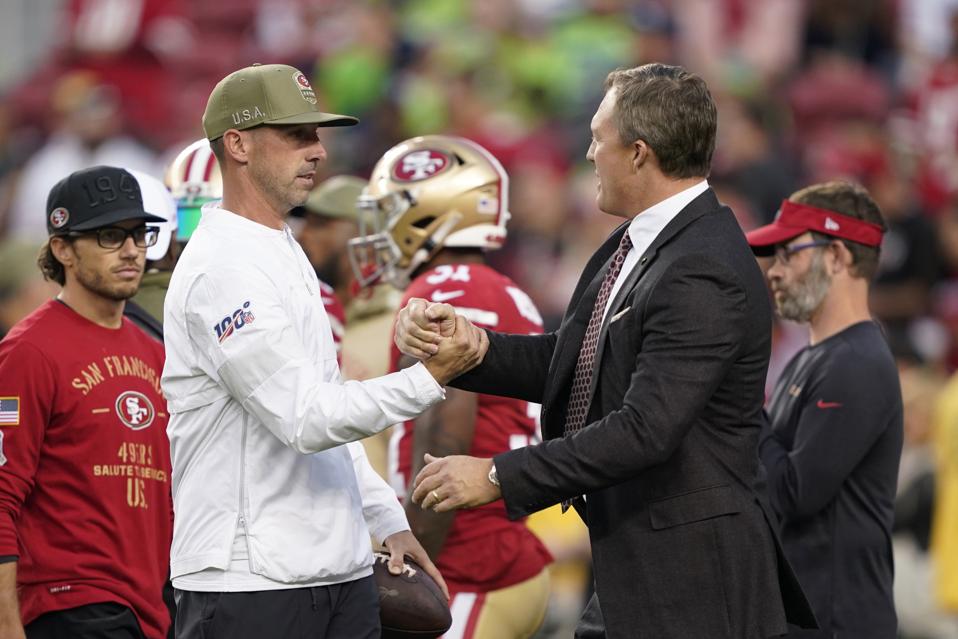 It’s time for the 49ers to think about signing these two to extensions. (AP Photo/Tony Avelar)

After winning a grand total of 10 games in their first two seasons as the 49ers’ top power players, this dynamic duo turned the corner big time in 2019.

Lynch went out there and brought nastiness on the defensive side of the ball, adding Nick Bosa to go with Pro Bowlers Kwon Alexander and Dee Ford. While injuries were the name of the game for the latter two this season, it all came together for a 49ers defense that finished second in the NFL in points allowed and No. 1 overall against the pass.

The general manager’s decision to trade for wide receiver Emmanuel Sanders is also notable here. Sanders caught only three passes for 25 yards against Seattle, but his impact on the field helped the likes of Deebo Samuel and George Kittle do their thing. Since acquiring Sanders back in Week 8, Jimmy Garoppolo has put up 20 touchdowns with seven interceptions for a 110-plus passer rating in 10 games. It’s not a coincidence.

As for Shanahan, he called one heck of a game against the Seahawks. That included a ton of misdirections plays. Shanahan also had a few tricks up his sleeve, especially when the 49ers needed a big play with Seattle gaining momentum.

While both of these figures have three years remaining on their contracts following the 2019 season, extensions should be in the cards here.

Following last week’s comeback win over the Rams, it was up to Garoppolo to keep things going against the Seahawks. In what was the biggest game of his career, the likely NFL Comeback Player of the Year came through in a big way.

Garoppolo completed 18-of-22 passes for 285 yards in the win. He also did well to avoid the giveaways that had plagued Garoppolo earlier in the season. What a clutch performance from this signal caller.

Garoppolo ends the 2019 regular season having completed 69% of his passes for 3,978 yards with 27 touchdowns and 13 interceptions. Statistically, it’s one of the 49ers’ best performances at quarterback since the Steve Young days.

While Richard Sherman was out there shutting down one side of the field, struggling cornerback Ahkello Witherspoon continued to give up big play after big play. Witherspoon was eventually benched for Emmanuel Moseley after yielding a touchdown catch.

All said, the third-year cornerback allowed six receptions on eight targets in another brutal overall performance. This is an area the 49ers must rectify heading into the playoffs. It’s that simple.

Russell Wilson Is Something Else 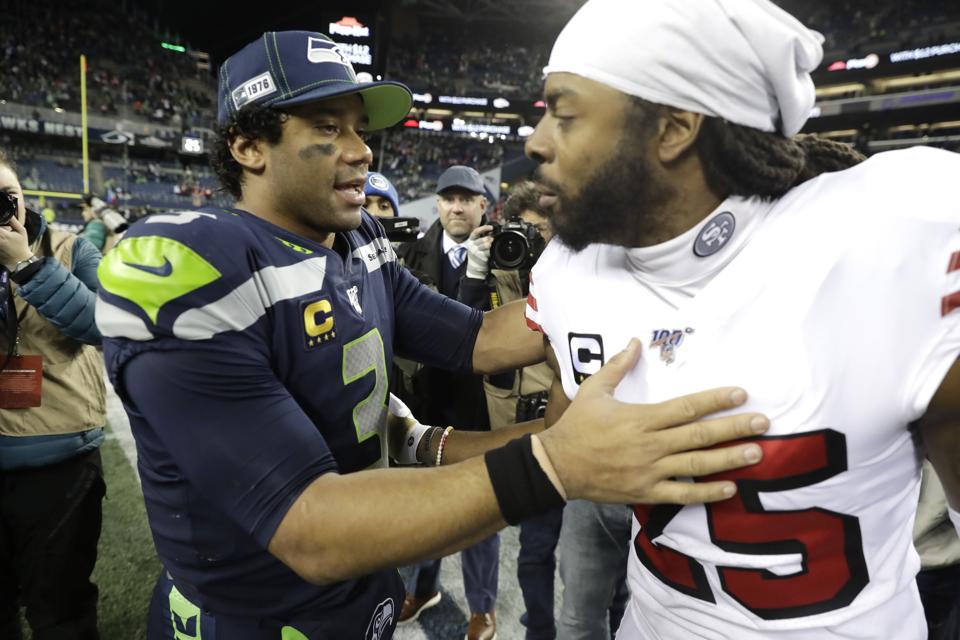 I have to give Wilson credit for having his Seahawks within inches of defeating a vastly superior team Sunday night. Without his top three running backs and stud left tackle, Wilson went tit-for-tat with Garoppolo.

The MVP candidate completed his first 11 passes in the second half, helping Seattle score three touchdowns in the process. Even with Hollister coming up short on that fourth-down play, Wilson more than proved that he also has the clutch gene.

I will say this. San Francisco can’t like the idea of potentially going up against Seattle in the divisional playoffs. That would come to fruition if the Seahawks take out Philadelphia and the Saints defeat Minnesota in the wild card round.

Deebo Samuel Is The X-Factor

This rookie second-round pick went full Madden with a 30-yard touchdown run in the first half, helping the 49ers widen their lead.

It’s those game-breaking plays that have defined Samuel through the second half of his initial NFL season. When all was said and done Sunday night, Samuel tallied 135 total yards on seven touches. He’s now put up 737 yards over the past nine games. Samuel is clicking at the exact right time.

San Francisco earning a bye week is absolutely huge in that the team’s regular-season’s bye came back in Week 4. We’re talking about a squad that continues to be banged up. Getting Wild Card Weekend off is going to help those injured players recover.

Pro Bowl defensive end Dee Ford and stud safety Jaquiski Tartt will both more than likely be on the field during the divisional round. Pro Bowl linebacker Kwon Alexander could also return after suffering a torn pectoral muscle back in Week 9. Having a full allotment on defense is going to be massive for this team moving forward. That’s for sure.

Playoffs Set Up Nice For 49ers 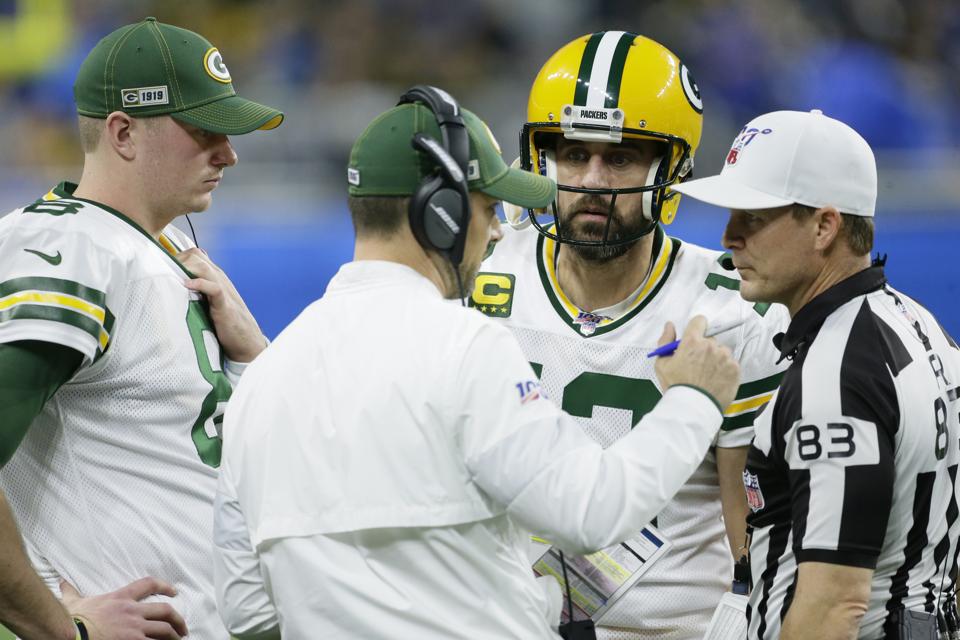 Aaron Rodgers and the Packers earning the No. 2 seeds sets things up swell for the 49ers. (AP … [+] Photo/Duane Burleson)

More so than earning home-field advantage in the NFC Playoffs, the seedings seem to benefit San Francisco. Green Bay earned a first-round bye with a narrow win over the Detroit Lions on Sunday. As we saw several weeks back, the Packers are not at the same level as the 49ers.

Coming in as the No. 3 seed, the Saints should take advantage of their home field against the Vikings next weekend. Meanwhile, an injury-plagued Seahawks team heads to Philadelphia to take on an Eagles squad riding high after earning the NFC East title.

It’s something to look at moving forward. Going up against either Philadelphia or Minnesota in the divisional playoffs would have the 49ers as major home favorites. Having earned home-field advantage, the idea of taking on the Packers in the NFC Championship Game at Levi’s also has to be appealing.

The one team to be concerned about has to be the Seahawks squad San Francisco narrowly defeated Sunday night. As noted above, it’s impossible to count out Mr. Wilson. That’s why the 49ers have to be rooting heavily for the Eagles to come out on top next week.