Breaking
Everything You Need to Know About Corporate Social...
Is Adaptive Leadership the Key to Motivating Employees?
Why business events are set to return with...
Business events set to return with a bang!
Expanding Internationally: 5 Things to Consider for eCommerce...
How the Machine Shop Is Going Digital in...
Sustainable Food Packaging Is Helping the Hospitality Sector...
Top 5 Investment Practices To Make More Money...
Managing IT Requirements for SMEs: 5 Aspects that...
How To Build a Successful Luxury Brand In...
Finding The Best Google AdWords Consultant for Your...
8 Top Tips To Help Your Agricultural Business...
Three Reasons Why Office Décor and Design Are...
Looking To Improve Efficiency In Your Business? Here’s...
AI and machine learning for business
How Social Media Changed the World
Home Business NFL Week 17 Picks: Schedule, Odds And Expert Predictions Against The Spread
Business 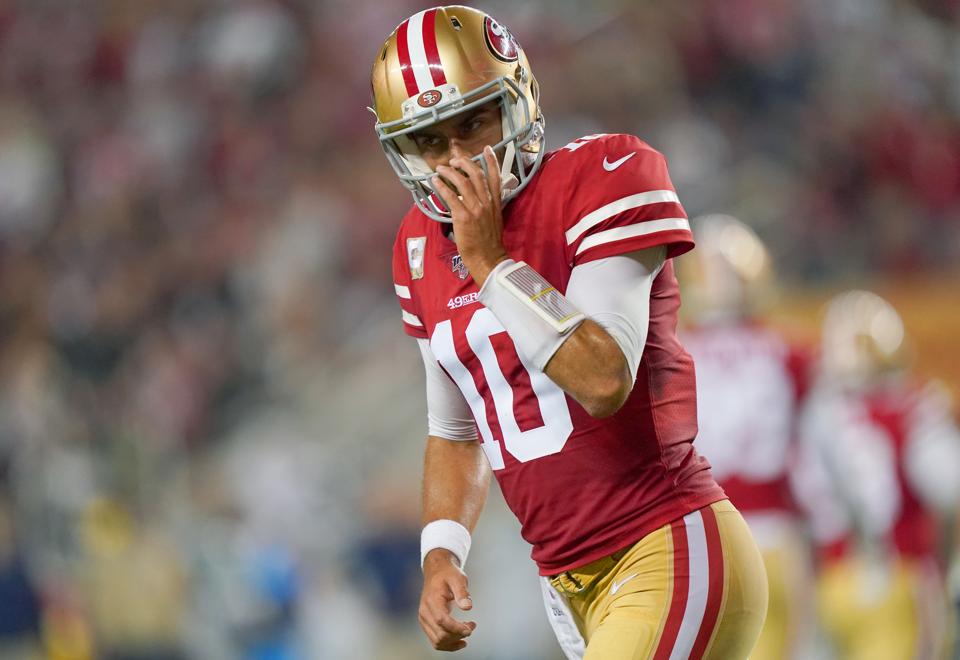 SANTA CLARA, CALIFORNIA – NOVEMBER 11: Jimmy Garoppolo #10 of the San Francisco 49ers reacts after … [+] throwing a touchdown pass against the Seattle Seahawks during the first quarter of an NFL football game at Levi’s Stadium on November 11, 2019 in Santa Clara, California. (Photo by Thearon W. Henderson/Getty Images)

The final week of the 2019 NFL regular season is upon us and is shaping up to be an epic day of football. As is tradition, the league has condensed all 16 games into one action-packed Sunday, foregoing the usual Thursday and Monday contests to tidily wrap up the campaign and crystallize the 2019 NFL Playoff picture ahead of Wild Card weekend. There are a surprising number of postseason scenarios still in play during this final set of matchups, including two divisional crowns that are yet to be decided, the top two seeds in the NFC and the conclusion to the three-team race for the final Wild Card slot in the AFC.

Kickoffs begin as usual at 1 p.m. ET on Sunday, but there isn’t too much to get excited for in this timeslot, even with eight games starting simultaneously. While half of the results could have an impact on the 2019 NFL Playoff standings, each of those four contests with clinching scenarios involves a double-digit favorite (New Orleans, New England and Green Bay, Kansas City) going up against an opponent that has nothing left to play after being officially eliminated from contention. On the bright side, the league shuffled the Week 17 schedule to make the latter half of Sunday’s slate as thrilling as possible. Fans will be scrambling to keep track of numerous meaningful matchups that all begin kicking off at 4:25 p.m. ET, a slot headlined by the heated battle for the NFC East crown, one that will make two games (PHI vs. NYG and WAS vs. DAL) relevant. The day ends with a special Sunday Night Football event between the San Francisco 49ers and Seattle Seahawks, a primetime game where the outcome will not only reveal the NFC West titlist, but will also determine how the conference’s top seeds shake out.

If you have been struggling to stay up on the latest playoff scenarios and need a fresh look at the postseason picture heading into the final week of the 2019 NFL season, you have come to the right place. Below you can find all the latest information on the current NFL standings, as well as what is at stake in Week 17. You can also find a complete viewing guide, including the full schedule, updated odds, starting times and TV information, for all 16 contests taking place on Sunday.

Those looking to make some wagers on this unique slate—Week 17 is always one of the toughest ones to bet and usually involves some massive line movement based on what coaches of teams with nothing to play for say they may do with their starters—can find some complimentary picks courtesy of Jon Price of SportsInformationTraders.com at the end of this article. Before seeing which teams the Vegas expert is taking during the final week of the campaign, make sure you check out the key betting trends for some of the top games on the board during Week 17 of the 2019 NFL season.

CBS Sports posted the latest standings and current snap shot of the race to the 2019 NFL Playoffs: 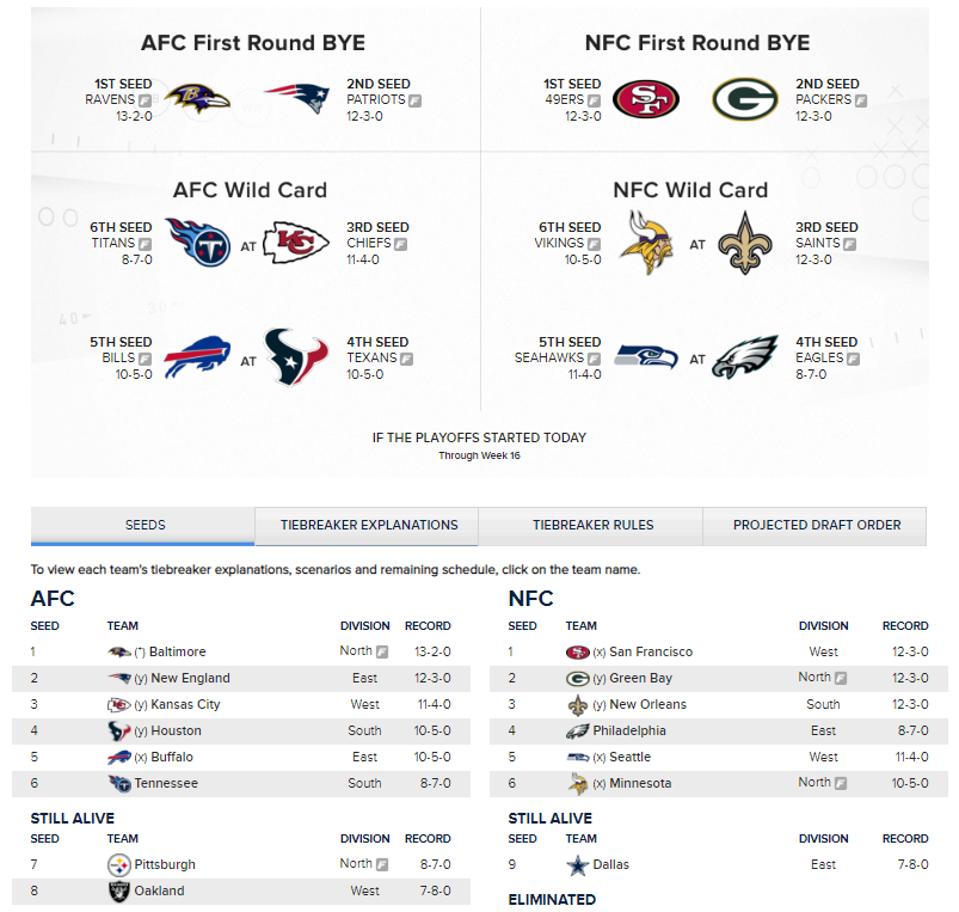 NFL Week 17 Betting Trends And Picks Against The Spread

The Buffalo Bills own the best ATS record in the league during the 2019 NFL season, going 9-4-2 leading up to Week 17. Despite being locked into the No. 5 seed in the AFC, Buffalo is favored by 1.5 points at home against a New York Jets squad that is just 6-9 against the number this year. The Jets have fared especially poorly on the road, covering just twice in seven games.

Andrew Siciliano pointed out that the Bills will be matching up with either the Chiefs or Texans depending on how Week 17 shakes out:

It’s worth noting that this line has swung three points in favor of Gang Green after it became clear that Buffalo would have nothing to play for, but that shouldn’t deter bettors from backing the home side. Bills head coach Sean McDermott has gone on record claiming that he’ll be starting his healthy first-stringers, but there is a chance they don’t see extended action. Even if the Bills do opt to rest their starters—something the franchise hasn’t been in position to do since the year 2000—relatively early on, they still have the talent to win and should find a way to come out ahead against a foe that has nothing to look forward to but the offseason. Lay the points and watch as Buffalo picks up its 11th win, which would be the most wins the Bills have accumulated in a season in 20 years.

The Dallas Cowboys are 6-1 SU and 5-2 ATS over their last seven meetings with the Washington Redskins. The Cowboys are double-digit favorites over this team for the first time since 2009, however, and failed to cover the last time they were giving 10 points or more against Washington. Dallas did secure a 31-21 win earlier in the 2019 NFL season, besting the ‘Skins on the road back in Week 2. The Cowboys will be desperate to win the final game of the year, as it gives them a chance to steal the NFC East crown away from rival Philadelphia Eagles after bungling it with a loss to their rival last week.

Gil Brandit found that Dallas boasts unprecedented point and yardage differential for a team below .500 in the post-merger NFL:

Bettors should be wary about going all-in on this Dallas team this week though, as it hasn’t been lucrative to back them as home chalk over the past decade. The Cowboys are a league-worst 20-36-1 ATS as a home favorite since Jason Garrett became head coach in 2010, while Washington has been competitive against the number on the road this year, going 4-2 ATS. This line has also shifted heavily in Dallas’ favor in recent days, moving from an open of 7.5 to 11 despite most of the public (58% of tickets, 61% of money) taking the Redskins. Don’t expect the Redskins to pull an outright upset, but they should be able to lean on their rushing attack to move the chains and grind some clock to keep the final score closer than the spread indicates.

The New Orleans Saints are 5-1 SU but just 2-4 ATS over their last six matchups with the Carolina Panthers. The Saints were favored in each of the last five games, covering just once in that span. These teams last met in late-November at the Superdome for a game that New Orleans was 10-point chalk in, but only edged out a 34-31 victory in thanks to a field goal from kicker Will Lutz with time expiring. Much has changed for the Panthers since that closely contested bout in Week 12, as the organization opted for a regime change and fired longtime head coach Ron Rivera following a Week 13 defeat. Since installing Perry Fewell as the interim head coach, Carolina has lost by double-digit margins and hasn’t covered in any of the three games they have played.

Adam Schefter reported that the Saints brought in Antonio Brown, the mercurial wideout who had an All-Pro career during his tenure with the Steelers and last played for the Patriots before being cut earlier in the 2019 NFL season, for a workout leading up to Week 17:

The Panthers are coming off one of their worst defeats of the 2019 NFL season, falling 38-6 to the middling Indianapolis Colts in a game that rookie quarterback Will Grier made his first career start in. He didn’t solve the turnover issues that plagued Kyle Allen—the signal-caller Grier replaced under center—after tossing three interceptions. Carolina is now mired in a seven-game losing streak and will have its work cut out in its attempt to end the 2019 NFL season on a high note. This is a motivated Saints foe that is favored by 13 points for a reason, as you can be sure they won’t be pulling any punches with the top seed in the NFC still at stake. It’s never easy to lay nearly two touchdowns on the road in the NFL, but it’s hard to envision a scenario in which New Orleans doesn’t go all out against their slumping rival with so much on the line. Considering this game kicks off at 1 p.m. ET and the Saints won’t be able to find out their seeding until the results from later matchups come in, the smart play is to take the better team here and watch as the Saints dominate wire-to-wire to lock up a key win.

The Tale Of Koko, The Nursing Home Therapy Dog