Breaking
How To Use Content To Draw Others To...
Apple Loop: New iPhone 13 Leaks, Apple’s App...
25 of the Best Add-On Slack Apps to...
How to Resolve Duplicate Content
How Millennials Are Changing The Face Of B2B...
Bloggers of the Month: Kelly Jackson & It’s...
As Bitcoin Suddenly Surges Over $50,000, The Price...
In The Race To Retail Dominance, Customer Service...
Meet Onesimus, The Enslaved Man Who Saved Boston...
How to Build a Sales Forecast Model
The Unexpected Ways COVID-19 Has Forever Changed What...
Google Posts: Conversion Factor — Not Ranking Factor
How To Bring Your Branding To Life
Coinbase Cofounders And Investors Poised To Rake In...
How To Stay Top-of-Mind For Your Audience With...
Introducing The Chrome Extension: Get Share Counts, Links...
Home Business NFL Wild Card Super Saturday: Bills at Texans; Titans at Patriots
Business 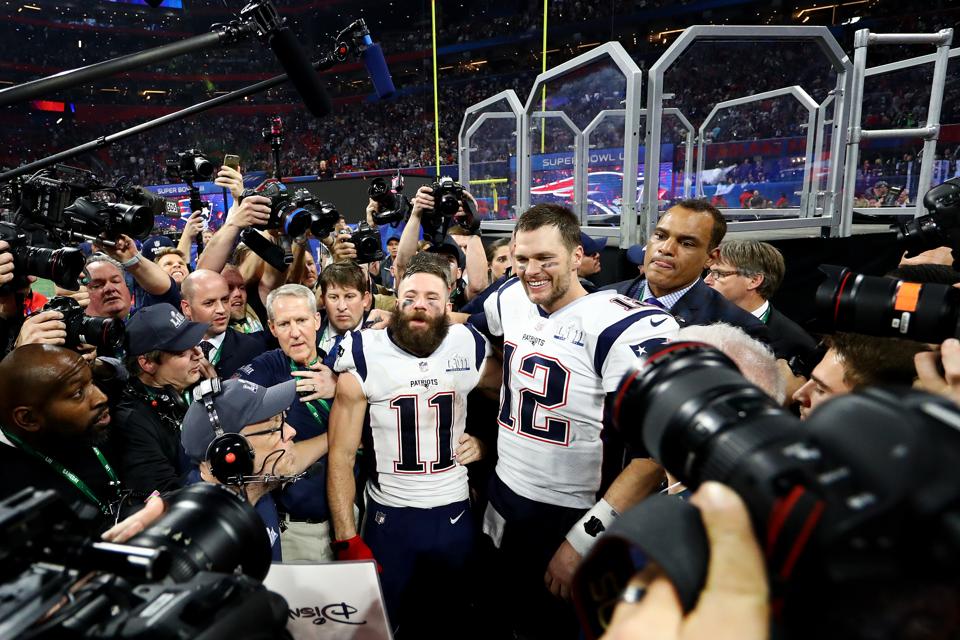 The early scoreboard for the four teams playing in Saturday’s NFL Wild Card playoffs is 6-0. The New England Patriots have six Super Bowl wins and a 6-3 record in the Big Game with Tom Brady and Bill Belichick. The other teams are a combined 0-5, with four losses by Buffalo and one by Tennessee.

The question is simple: Which team will win?

After going 17 seasons between playoff berths, the Bills are in the postseason for the second time in three years. Now, the next step is winning a playoff game. Buffalo hasn’t won a playoff game since 1995, the fourth-longest drought in the NFL.

“It’s the same game we’ve been playing since the beginning of the year,” Buffalo quarterback Josh Allen said. “Still the game of football, the dimensions are the same, we have the same plays that we’ve had in all year. We’re not trying to do anything different, not trying to switch up practice routines, not trying to be any different. You dance with who brought you. We have to go out there and execute.”

The Texans are in the playoffs for the fourth time in five years. Now, the next step is taking the next step. They are 3-5 in their playoff history and have not advanced past the divisional round. Maybe this year will be different with Deshaun Watson, who is the first quarterback in franchise history to lead the team to multiple playoffs. 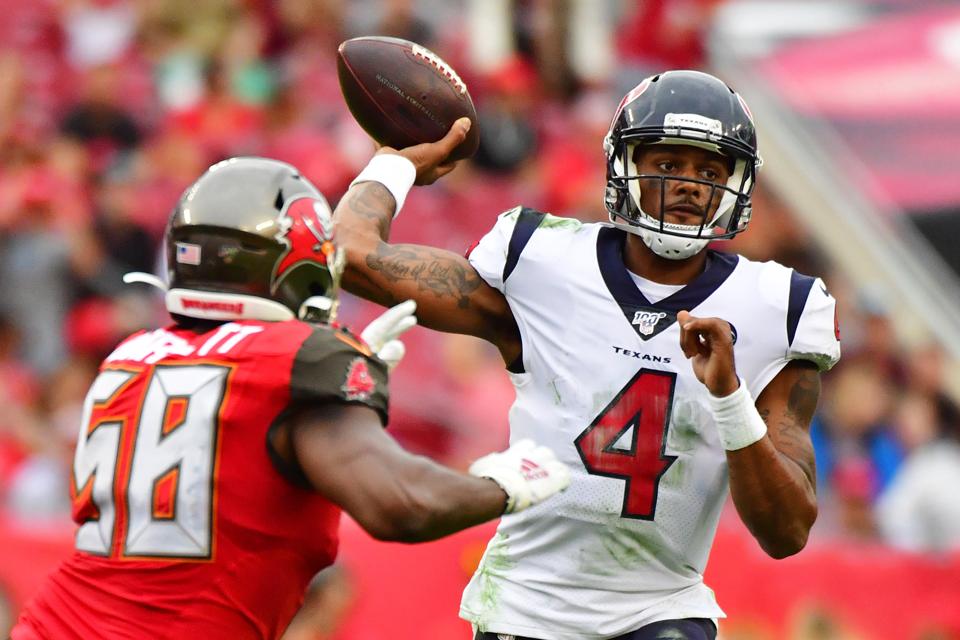 TAMPA, FLORIDA – DECEMBER 21: Deshaun Watson #4 of the Houston Texans drops back to throw a pass … [+] under pressure from Shaquil Barrett #58 of the Tampa Bay Buccaneers during the fourth quarter of a football game at Raymond James Stadium on December 21, 2019 in Tampa, Florida. (Photo by Julio Aguilar/Getty Images)

“We earned this opportunity and it’s real dope,” Watson said. “No one in our locker room wants it to end and we’ll continue to keep working and keep fighting forward to try to improve and get to the next week.”

Watson’s favorite receiver is DeAndre Hopkins, who led the AFC with 104 receptions. He’ll see plenty of Buffalo cornerback Tre’Davious White, who tied for the NFL lead with six interceptions. White keys a Buffalo defense that finished second in scoring (16.2 points per game) and third in total defense (298.3 yards per game).

J.J. Watt is expected to be back in the lineup for Houston. The star defensive lineman suffered a torn pectoral in October. After recording 16 sacks in 16 games last season, he had four sacks in eight games this season – his third time on injured reserve in four years. He’ll primarily be used on passing downs.

In an intriguing clash of quarterbacks, it’s Tom Brady vs. Ryan Tannehill.

Brady, who has led the Patriots to 11 consecutive division titles and six Super Bowl championships, is the postseason’s all-time leader in games played (40), passing yards (11,179) and touchdown passes (73). Brady’s 30 playoffs wins are almost double runner-up Joe Montana’s 16. He guided the Patriots to victory in Super Bowl LIII last year. Does he have one more run in him? Or were the cracks that showed up in the Patriots’ façade ready to finally tear down the NFL’s ultimate dynasty?

“I’m not much for nostalgia,” the 42-year-old Brady said about this potentially being the end of the line. “I’m just pretty focused on what I need to do. This week’s felt pretty much like every other week for the last 20 years. … I haven’t thought about those things. I wouldn’t be thinking about those things, anyway. It’s felt like a normal week for me, so I just approached practice like I always have and try to do the best I could do. So that’s what I’m gonna try to do as well.” 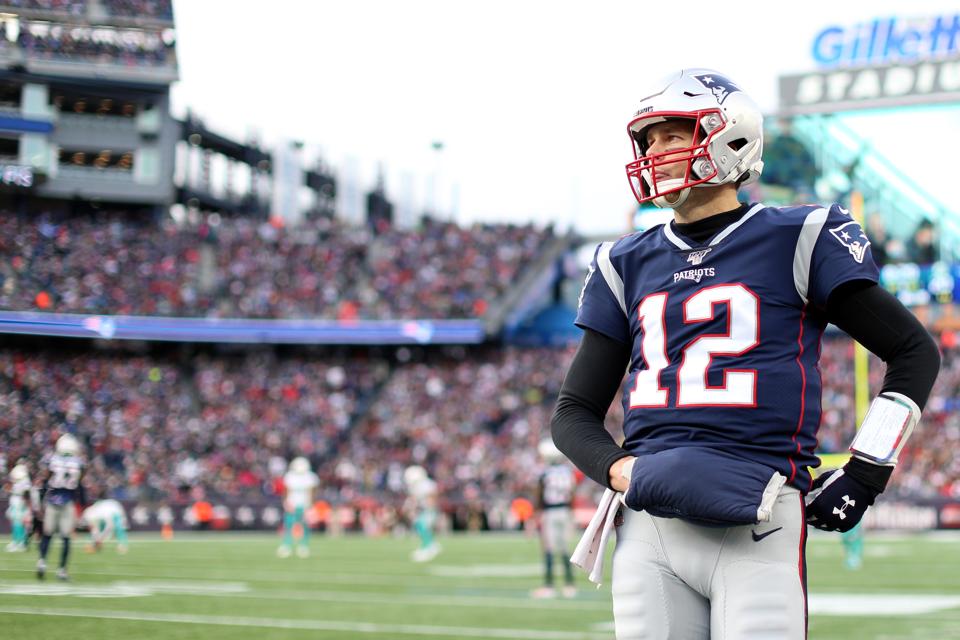 FOXBOROUGH, MASSACHUSETTS – DECEMBER 29: Tom Brady #12 of the New England Patriots looks on during … [+] the game against the Miami Dolphins at Gillette Stadium on December 29, 2019 in Foxborough, Massachusetts. The Dolphins defeat the Patriots 27-24. (Photo by Maddie Meyer/Getty Images)

Tannehill, on the other hand, essentially was picked up off the scrap heap. A former first-round pick by Miami, the Dolphins sent Tannehill and a sixth-round pick to Tennessee for fourth- and seventh-round picks. Tannehill started the season on the bench, replaced Marcus Mariota and put together a glittering 117.5 passer rating to rally the Titans to the playoffs. In his 10 starts, the Titans went 7-3 and averaged 30.4 points per game.

The offense has struggled this season without tight end Rob Gronkowski. Brady’s aerial attack will flow through Julian Edelman. He has playoff totals of 115 receptions for 1,412 yards, second in NFL history to Hall of Famer Jerry Rice’s 151 receptions for 2,245 yards.

For the Titans, Derrick Henry led the NFL with a career-high 1,540 rushing yards. He is on a roll: Henry averaged 149.3 rushing yards over his last six games with 10 rushing touchdowns. Tannehill’s top target is rookie A.J. Brown. Brown is a big-play threat: His four touchdown catches of 50-plus yards are second only to the five apiece by Isaac Bruce (1973) and Randy Moss (1998) among rookies since 1970.

The Patriots have the highest winning percentage in playoff history, with their 37-20 mark equating to .649. The Titans, on the other hand, have won one playoff game the past 15 seasons.

“It’s a new season, and we have to play well on Saturday. That’s the one thing I learned from being a Patriot,” Titans cornerback Logan Ryan said. “It doesn’t matter what you did, it doesn’t matter if it’s ‘on to Cincinnati’ or whatever it may be. It’s one game at a time in the playoffs. You’ve got to give all you got. It’s not a best of seven, it’s not a best of five.”