Breaking
Entrepreneurs Are Bringing Transparency To Home Buying And...
Best Incentive To Get Vaccinated: Money, Messaging, Or...
Page Level Query Analysis at Scale with Google...
How A CIO Can Align IT With Business...
Blogger of the Month: Jo, Girl Eats World
6 Things Women In Business Know That Men...
How to Use First-Party Data for Ad Personalization
Pressing Reset—Putting A Fallen Unicorn Back On Its...
How We Went Viral: Promoting Content with Influencers,...
Blame Olympic Record Price Tag For Return To...
Apple iOS 14.5 Release: Should You Upgrade?
How to Come up with Podcast Topics and...
Why Gaming Gear Company Razer Launched A $50...
Technical SEO Implementations to Increase the Impact of...
30 Brilliant Ways to Market Your Eco-Friendly Shopify...
15 Tech Industry Leaders Share Overused (And Misused)...
Home Technology No, Saturday’s ‘Buck Moon Eclipse’ Is Not A ‘Blood Moon.’ This Is Why
Technology

The moon in various stages of a ‘blood moon’ total lunar eclipse as seen from Vienna, on Jannuary … [+] 21, 2019. GEORG HOCHMUTH/AFP via Getty Images

There’s a lunar eclipse—a “Buck Moon Eclipse” or “Thunder Moon Eclipse”—visible in North and South America, but it’s probably not the kind you’re thinking about.

During a “blood Moon”—the colloquial term for a total lunar eclipse—our satellite turns a pinkish-copper-reddish color for a few hours.

However, that’s not what’s going to happen on Saturday because the “Buck Moon Eclipse” is, in fact, a far less visually interesting event—it’s a penumbral lunar eclipse.

It’s a story about Earth’s shadow in space.

During a total lunar eclipse the full Moon is lit only by sunlight filtered by Earth’s atmosphere.

What is a ‘blood Moon’ total lunar eclipse?

It’s when the whole of the full Moon enters the darkest part of Earth’s shadow—its umbral shadow, or umbra. A full Moon occurs when our satellite is 100% illuminated by the Sun, but during a total lunar eclipse the full Moon is almost completely shielded from the Sun’s direct light.

Why does the Moon glow red during a total lunar eclipse?

The only sunlight that reaches the Moon is first coming through the Earth’s atmosphere. As it does so, that light is filtered by a lot of air molecules in Earth’s atmosphere that scatter most of the blue light, leaving mainly red light to reach the lunar surface.

However, just before and after the spectacle of a rusty-reddish Moon, our satellite moves through the Earth’s outer shadow—its penumbral shadow, or penumbra. As it does so, it merely loses its brightness, and doesn’t change color.

It’s just that part of a lunar eclipse that’s happening on Saturday night—and not the “blood Moon” part. 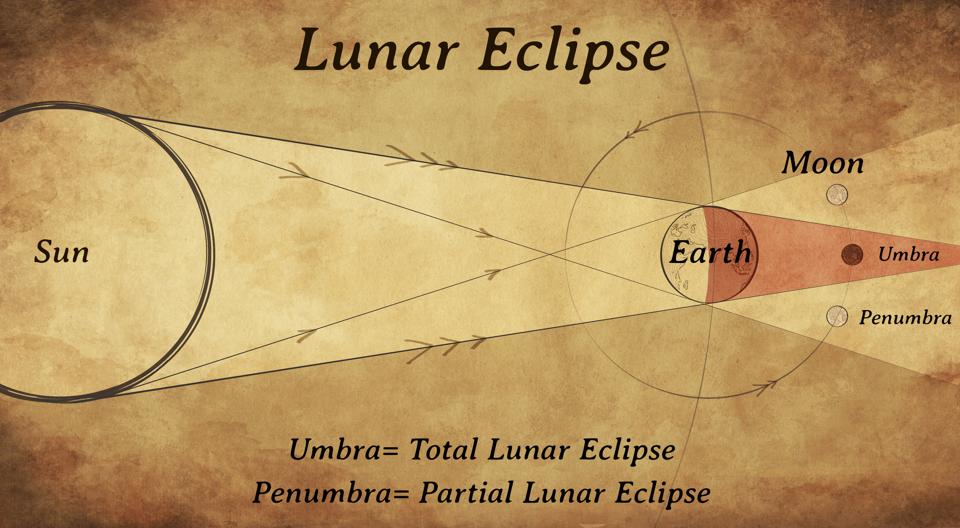 What is a penumbral lunar eclipse?

It’s like the warm-up without the main act. A penumbral lunar eclipse is when the full Moon crosses into the Earth’s outer, lighter, fuzzier penumbra, but doesn’t enter the umbra.

As a visual spectacle, it’s not much to look at, though experienced moon-gazers can usually notice it. That may not be true this weekend since only about a third of the full Moon will drift into Earth’s penumbra.

Although a penumbral lunar eclipse isn’t much to get excited about, it is a good chance to take a great photograph of a more muted full Moon.

Is it safe to look at a penumbral lunar eclipse?

This eclipse completely safe to look at, with the darkening most easily seen through binoculars or a telescope.

So expect a slight dimming of the full “Buck Moon” on Saturday night, and not a dramatic “blood Moon.”