Breaking
The WFH Revolution: How Covid-19 Is Changing The...
eToro Announces Staking For Cardano And Tron
The End Of Third-Party Data — Finally
The Scientologist Billionaire Trying To Make A New...
Mission-Driven Fintech Kontist Shakes Up The Future Of...
What Can The Simple Fact That ‘We Exist’...
Stock Market: Here Comes October With Scary Tricks...
Farmers, College Students, And Food Banks Across The...
Thinking Of Writing A Book To Grow Your...
Microsoft Security Report Highlights New Sophisticated Threats From...
3 Steps To Help You Build Entrepreneurial Confidence
SMB Fintech Darling Kabbage To Be Acquired By...
Silicon Valley’s Next Target: The One-Person Business
The Small Business Code Of Ethics
President’s Remarks About COVID-19 At First Debate True...
FIFA 21 Gameplay: Liverpool Vs. Manchester United
Home Business ‘No Time To Die’ Box Office: Delays Will Increase Anticipation For Daniel Craig’s Final James Bond Film
Business 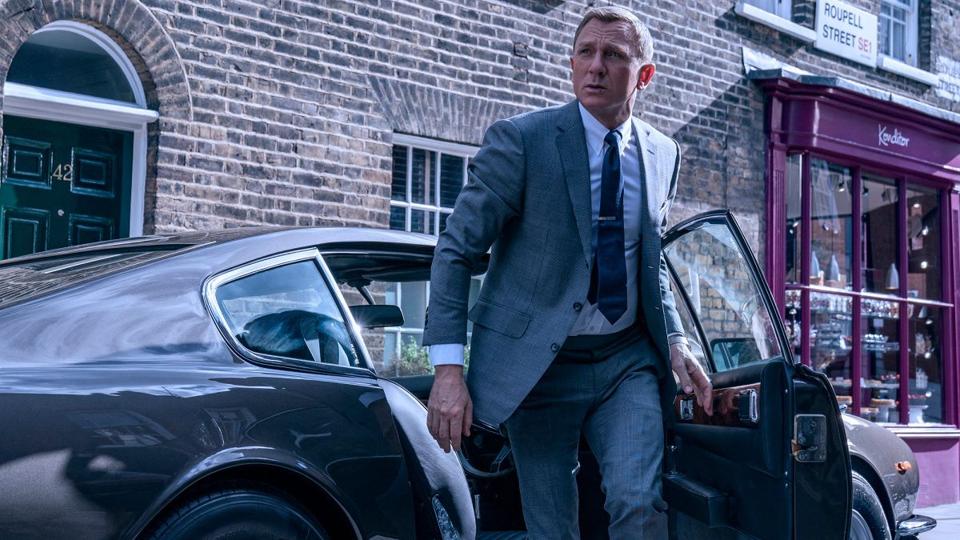 Daniel Craig is James Bond in No Time to Die

History shows that any unexpected delays between James Bond installments only help the eventual global box office for the next one, even if audiences didn’t like the previous film.

In a sane(r) world, I’d be spending this morning dissecting the over/under $40 million opening day of MGM and Universal’s No Time to Die. I’d be looking at the multiplier for Spectre (2.5 x $28 million = $70 million) and Quantum of Solace (2.56 x $27 million = $67 million) to argue that we’d probably be about to get the year’s first $100 million domestic debut. That said, I’d also have to wonder out loud if the film’s multiplier over the weekend would instead be closer to Fate of the Furious ($98 million from a $45 million Friday) and Furious 7 ($147 million/$67 million) on this same weekend in 2017 and 2015. Such a frontloaded (partially due to yesterday being Good Friday) over/under 2.18x multiplier and a weekend closer to Skyfall’s $90 million launch.

After initially being slated for November 8, 2019 (four years to the weekend after Spectre), No Time to Die was the first big movie delayed due to the coronavirus. It’s now slated to open on November 12 in the UK and November 25 in North America. Presuming the reviews were halfway decent and the film delivered in terms of 007-ish tropes (the stunts, the gadgets, the babes – Anna De Armas or Ben Whishaw… pick your poison, the locations, the Bond, the IMAX-friendly visuals), history shows that James Bond would be back and more-or-less better than ever. That’ll be five years since Spectre, but 007 is a franchise where absence makes the heart grow fonder. This may, in fact, partially explain the longevity of the 007 saga even in a sea of big-budget tentpoles.

Sean Connery starts the franchise, takes a break and then comes back.

Every time 007 takes a comparatively extended leave of absence, everyone frets about whether the franchise is still culturally relevant and/or if it can adapt to the times, ignoring that the James Bond series has always approximated the cultural moment. Fun fact: the “Bond Girls” have mostly been empowered, independent and assertive “Bond Women” since Carey Lowell in License to Kill 31 years ago, if not Barbara Bach in The Spy Who Loved Me 43 years ago. And then the series comes back from hibernation and everyone happily shows up. Dr. No opened in May of 1962 while From Russia with Love opened in April of 1963, with Goldfinger launching the franchise into the stratosphere ($56 million domestic, compared to $24 million for FRWL and $16 million for Dr. No) in December of 1964.

Thunderball earned a stunning $63.5 million in December of 1965 (around $700 million adjusted for inflation, still the biggest non-fantasy action movie ever). You Only Live Twice brought the franchise back down to Earth with “only” $43 million in June of 1967, and then Sean Connery ditched the role for what would turn out to be George Lazenby’s On Her Majesty’s Secret Service. The (underrated in its day, but now entirely appreciated by fans) film earned just $22 million in 1969, and Connery was paid a then-huge $1.5 million (which he donated to charity) to return for Diamonds Are Forever in 1971. The four-year gap between Connery installments helped the film earn $44 million. It would start an odd pattern whereby any longer-than-expected gap in 007 movies would result in a robust financial upswing.

Roger Moore takes a moment to get into character.

The Spy Who Loved Me, Roger Moore’s best 007 movie and my pick for the “definitive” installment in terms of “everything that makes this franchise special,” opened in June of 1977. That was 2.5 years after the disappointing The Man with the Golden Gun, arguably the worst 007 film, all due respect to Christopher Lee, earned just $21 million in 1974. It has been argued that Live and Let Die and The Man With the Golden Gun were written for Sean Connery, while The Spy Who Loved Me was the first that felt tailored to Roger Moore’s mix of unapologetic camp and dispassionate professionalism. Either way, absence indeed made the heart grow fonder. The Spy Who Loved Me arguably saved the franchise, becoming the first 007 movie since Thunderball to earn more than $44 million.

The film’s $46 million gross ($196 million adjusted) would lead to a then-franchise high-point with Moonraker in 1979. Most will argue the “James Bond goes to space” entry (which is pretty good before its final reel) soared to $70 million because it successfully offered Star Wars-ish outer space thrills a year before The Empire Strikes Back. I would argue it was partially cashing in on the earned goodwill of its predecessor. Spy Who Loved Me would start an unbroken “one movie every two years” streak until License to Kill in the summer of 1989. Timothy Dalton’s (underrated in its day but, again, now correctly appreciated by the fans) PG-13 and comparatively brutal 007 flick (essentially “Bond does modern 80’s action”) was the first to bomb ($34 million domestic) since The Man With the Golden Gun.

The failure of License to Kill amid the trendsetting likes of Batman, Lethal Weapon 2, Indiana Jones and the Last Crusade and Honey, I Shrunk the Kids led to a then-unthinkable six-year sabbatical. Dalton eventually bowed out and the media hemmed and hawed about whether the franchise was culturally irrelevant and whether 007 should be a woman (Sharon Stone), a black man (Wesley Snipes) or an international superstar (Mel Gibson). GoldenEye in November of 1995 after being delayed from summer due to reshoots allegedly related to similarities to James Cameron’s True Lies. Starring Pierce Brosnan (who was initially cast to replace Roger Moore before NBC deviously renewed Remington Steele) and directed by Martin Campbell, GoldenEye was a mix of pure unapologetic 007 with a bit of meta-commentary and self-awareness. The six-year absence resulted in an all-time high.

EON and friends made the choice to reboot the series, trading the comparative camp and larger-than-life spectacle of Die Another Day for grounded, “post-9/11” espionage thrills. Since Martin Campbell revived the franchise with GoldenEye in 1995, he was hired to introduce the world to “Daniel Craig as James Bond” with Casino Royale in 2006. The film was both a major departure for the franchise in terms of tone and brutal action and yet very much a 007 movie, winning rave reviews and earning $167 million domestic and a sky-high $595 million worldwide. Quantum of Solace earned mixed notices two years later, but goodwill from Casino Royale and franchise loyalty resulted in $168 million domestic and $589 million global. MGM’s financial issues kept Craig out of the tux for four years, again an unthinkable delay considering the positive momentum.

Buoyed by rave reviews, an Oscar-winning theme song from Adele, a video featuring Daniel Craig and the Queen of England (intended to plug that summer’s Olympic games), the 50th anniversary of Dr. No and a lack of big-scale year-end competition (The Twilight Saga: Breaking Dawn Part II in November and The Hobbit: An Unexpected Journey in December were “for fans only” blockbusters) Sam Mendes’ Skyfall (a “Bond does Dark Knight” actioner which remembered that Chris Nolan’s movies are fun and funny) earned a franchise-high $90 million Fri-Sun debut (counting Thursday IMAX grosses), $304 million domestic and $1.108 billion worldwide. James Bond returned with a now-expected three-year-delay with Mendes’ Spectre. Bad buzz and mixed reviews aside (it’s one of the worst installments, unsuccessfully blending nostalgia and world-building), it still grossed $200 million domestic and $881 million worldwide.

No Time To Die will open five years after Spectre.

Had things gone to plan, we’d be dissecting the Friday grosses for No Time to Die. There’s little reason not to expect Cary Fukunaga’s No Time To Die, presuming it’s not a train wreck of implausible proportions, to score big when it finally arrives. Does that mean it’ll flirt with Skyfall numbers? Not necessarily, although a November release surrounded by comparatively lesser biggies (Godzilla vs. Kong, Top Gun: Maverick and Dune) makes that more likely. The history of James Bond films shows that long periods of hibernation lead to increased, rather than decreased, interest in the father of all modern action franchises. We spend the time speculating about the franchise’s cultural relevance, whether the disliked previous installment will harm the franchise and whether the kids will show up. Then, like clockwork, it is, it doesn’t and they do.

Audiences came back for Connery’s return in Diamonds Are Forever, and they came back three years after Man With the Golden Gun for a re-energized Spy Who Loved Me. They showed up for Pierce Brosnan’s GoldenEye and Daniel Craig’s Casino Royale (tip of the hat to Martin Campbell). Misgivings about Quantum of Solace and a four-year wait until Skyfall didn’t hurt. It’ll now be five years between the somewhat disliked Spectre and Craig’s fifth and final 007 performance in No Time to Die. If history follows to suit, especially if Craig gets a better farewell flick than Connery, Moore and Brosnan, then the unusual gap between 007 films, even following a divisive installment, will only increase anticipation. No Time To Die should have been Hollywood’s first mega-blockbuster of 2020. Instead, it may just be its last.