Breaking
ESG Metrics: A Path Forward For Companies
‘Moriarty The Patriot’ Makes A Hero Of Holme’s...
Mind The 99 Year Gap: How To More...
The WFH Revolution: How Covid-19 Is Changing The...
eToro Announces Staking For Cardano And Tron
Fintech Startups: Plan For Your Customers’ Emotional Realities
The End Of Third-Party Data — Finally
The Scientologist Billionaire Trying To Make A New...
Mission-Driven Fintech Kontist Shakes Up The Future Of...
What Can The Simple Fact That ‘We Exist’...
Stock Market: Here Comes October With Scary Tricks...
Farmers, College Students, And Food Banks Across The...
Thinking Of Writing A Book To Grow Your...
Microsoft Security Report Highlights New Sophisticated Threats From...
3 Steps To Help You Build Entrepreneurial Confidence
SMB Fintech Darling Kabbage To Be Acquired By...
Home Business Nobody In The 2020 NBA Draft Craves Greatness Like Villanova’s Saddiq Bey
Business 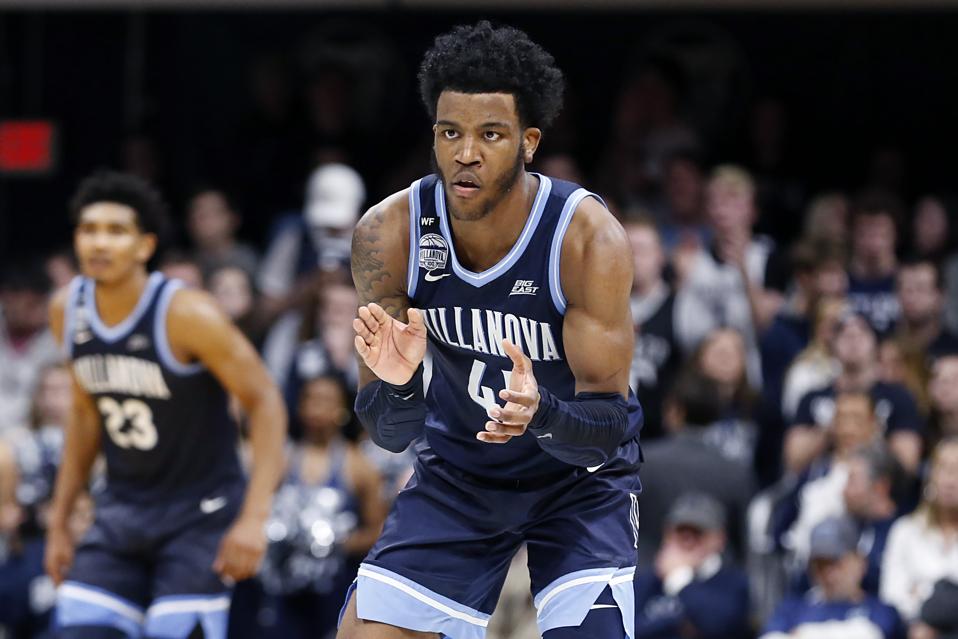 INDIANAPOLIS, INDIANA – FEBRUARY 05: Saddiq Bey #41 of the Villanova Wildcats in action in the game … [+] against the Butler Bulldogs at Hinkle Fieldhouse on February 05, 2020 in Indianapolis, Indiana. (Photo by Justin Casterline/Getty Images)

Beginning with the 2015-16 season, Villanova University established itself as one of college basketball’s elite programs. It was that year that head coach Jay Wright led the Wildcats to their first championship since 1985. Two years later, Villanova raised yet another banner.

In order to make a leap like the one the Wildcats made, it’s important to develop NBA-caliber talent. So it should come as no surprise to anybody that the Wildcats have had six players drafted since the 2017 NBA Draft. Four of those guys were picked in the first round.

This year’s Villanova team is another good one. The Wildcats are 23-7 on the season, and they will be heading to the NCAA tournament for the ninth year in a row. And just like a few of those other Villanova teams, Jay Wright has another player that will be picked in the first round. His name is Saddiq Bey.

Bey is a 6-foot-8 forward that is averaging 16 points per game on 47.5% shooting from the floor and 44.7% shooting from the outside in his second season with the Wildcats. He is the leading scorer for a Wildcats team that is looking to make some noise later this month.

As opposed to programs like Duke and Kentucky, a lot of Villanova’s success comes from player development. Sure, the Wildcats have put plenty of players into the NBA over the years, but these aren’t exactly five-star recruits that were getting there no matter what. Schools like Villanova get players that come to college and know that they need to work in order to reach their goals. And one thing NBA teams would love to know is that nobody works harder than Bey.

Last year, Bey didn’t look like a guy that would be a surefire perimeter threat at the next level. However, Bey has removed all doubt, becoming one of the most projectable shooters in this draft class. At 1.425 points per possession in catch-and-shoot situations in the half court, Bey ranks in the 97th percentile in all of college basketball. He’s at 1.315 points per possession on threes in the half court, which is good for the 95th percentile. Look at how comfortable he is here (video from Synergy Sports):

Villanova needs a bucket against Butler, so “GQ Jay” draws up a play to free Bey up. With no hesitation at all, Bey rises and fires over lengthy Bulldogs forward Sean McDermott. One quick look at Bey’s mechanics is all you need to see that he has textbook form. At his size, that’s going to be difficult to guard at any level. He also happens to be extremely clutch, which manifested itself in the final minutes of that same meeting with Butler:

While Bey will be able to earn his keep from beyond the arc, he is more than just a shooter. This season, Bey is in the 55th percentile in the mid-range game. That’s a pretty good number, but one that I’d expect him to improve moving forward. Being able to pull up off the dribble will make him a dangerous scorer.

He’s also a very good finisher around the basket, which is just part of the reason he is such a great pick-and-roll ball handler. Here’s a bucket that shows what he can do at the rim:

On the season, Bey is scoring .984 points per possession when running the pick and roll. It’s his ability to rise up and knock down triples that makes him such a tough cover in those situations. If the big man drops in his coverage, Bey will just comfortably knock down the three. But if the big shows, Bey is going right by him to either finish at the rim or drop it off to an open teammate. While he lacks any type of noticeable burst, I think he moves well enough to continue to get to the rim in the pros.

Bey does have weaknesses offensively—all players do—but like guys like Kawhi Leonard and Damian Lillard, I see him as the type of person that will work each summer to come back with a new toy that makes him tougher to guard. He has that type of work ethic. That’s part of the reason I think he has more upside than he is given credit for.

Defensively, Bey looks like somebody that will comfortably cover both threes and fours at the next level. Many consider him elite on this end of the floor, but I look at him as more of an above-average defender. The lack of burst and athleticism that I don’t think will hurt him on the offensive end has me hesitant to call him a true stopper. He should be able to hold his own—and doesn’t look like a guy that will ever be a negative—but I can’t imagine him shutting down one of the NBA’s premier athletes. That’s just a tough ask.

Bey has shown an ability to cover guards on the perimeter this season, though. That alone is a great sign moving forward. Here’s Bey coming up with a game-winning stop on Kansas point guard Devon Dotson:

Dotson is going to be an NBA point guard very soon, even if it’s just as a backup. So seeing Bey sticking with him in isolation is big. Teams won’t be running a lot of pick-and-roll action that specifically targets Bey, but every wing ends up covering a guard at some point in the game. Knowing that he isn’t going to get toasted eases the mind. Bey is also a good team defender. So even if he’s not as good of a one-on-one stopper as others might think he is, Bey is smart and will get himself to the right spots. That is something that NBA general managers will value in a big way.

By the time the draft comes around, there’s a real possibility that Bey will be a lottery pick. He’s not good enough to be a first or second option on offense, but he doesn’t need to be. With his ability to shoot the ball, he’ll make life on his teammates a lot easier. The fact that he has his own creation tools is only going to give his coach more options offensively. A player like that is perfect for almost every team. Especially when that player also takes pride in the work he does on the defensive end.

Too often, players are satisfied just being good at a few things. But Bey wants to help his team on both ends of the floor, and he’s going to work tirelessly to get to the point where he’s doing that. Guys like that are the ones you want to add to your locker room.