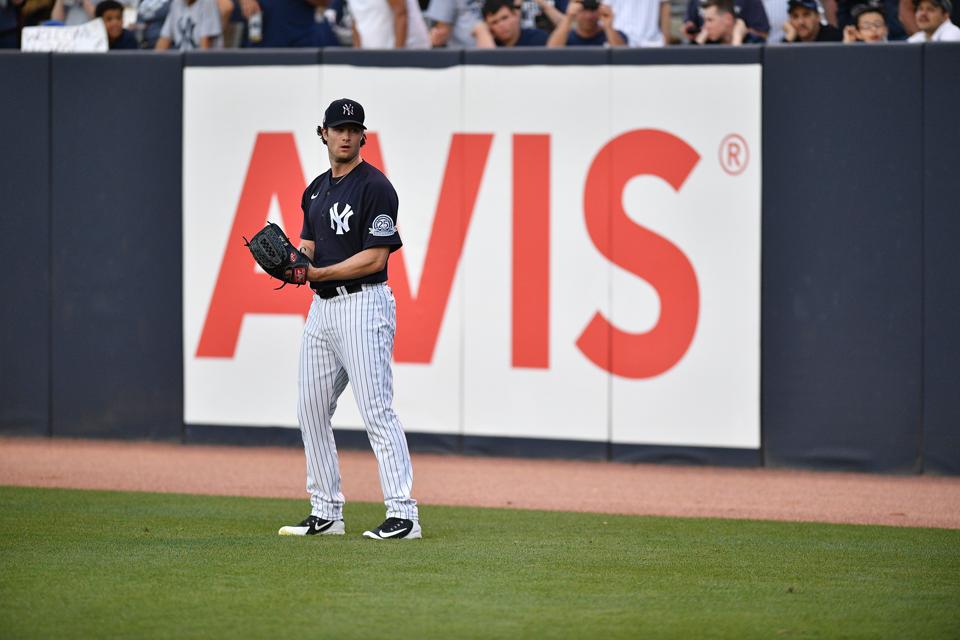 TAMPA, FLORIDA – FEBRUARY 24: Gerrit Cole #45 of the New York Yankees warms up before the spring … [+] training game against the Pittsburgh Pirates at Steinbrenner Field on February 24, 2020 in Tampa, Florida. (Photo by Mark Brown/Getty Images)

The sight of Gerrit Cole in shorts and numerous t-shirts working out on the Yankee Stadium mound can be viewed as a sense of normalcy, or at least what passes for a normal situation in the midst of the coronavirus pandemic.

On Thursday, Cole faced hitters at Yankee Stadium for the first time. Instead of opposing hitters (the Yankees were originally scheduled to be off before visiting Toronto), Cole seemed to ramp it up, showcasing a high velocity while facing Aaron Judge, Luke Voit and Aaron Hicks.

Cole has been working off the mounds at Yankee Stadium in previous weeks and with manager Aaron Boone in Connecticut while a potential baseball season was attempted to be finalized but the sight of him slinging fastballs with ease at high velocities made it feel like it was somewhat for real.

“He is pretty close to game speed,” Yankees first-year pitching coach Matt Blake said via zoom videoconferencing on Thursday afternoon. “So, we are in a game-ready velocity.

On this date a year ago, Cole was two days removed from striking out 10 in seven innings of a win over the Seattle Mariners and in the heat at Yankee Stadium, he looked like someone who might get a double-digit strikeout total if he was pitching in a real game.

“We actually went three-ups today and kind of set the bar for kind of what we are going to build on, targeting three weeks out and getting ready for the regular season,” Blake said. “The nice thing is that it doesn’t take fans in the stands to get him amped so we are good there.”

Cole is likely to be on the mound in a real game July 23 when the Yankees are expected to begin the 60-game season in Washington, something that is expected to become official next week when the schedule is released.

Cole is starting off his $324 million contract in unique fashion and it will be about eight months after a lavish press conference where he cited Curt Flood and Marvin Miller as among the reasons for being able to command the most money by any free agent pitcher. He will anchor a five-man rotation and will be the ace the Yankees have failed to obtain for various reasons since signing CC Sabathia following the 2008 season.

Cole’s brilliant spring training appearance was part of an encouraging day on the mound for the Yankees.

Besides his showing, Masahiro Tanaka played catch Thursday and will take the mound shortly while James Paxton as noted by GM Brian Cashman Tuesday is expected to completely ready for the abbreviated season.

“He’s in a really good spot,” Blake said of Paxton. “He’ll be one of the most built up coming in here. Knock on wood, we feel good about the health of our team coming into camp. Now getting them in and building them up will be the critical period, where we want to make sure we don’t push them too fast.”

Not pushing the pitchers too fast will likely mean shorter outings by even the aces and the possibility of 15 to 18 pitchers on the roster at the outset.

Those are decisions in the near future for the Yankees but for now, watching Cole’s velocity in spring training in July can be considered normal for now.

When Life Gives You Lemons, Make ‘Lemonade’ Or Something Like It

You Shouldn’t Sacrifice Security To Video Conference During...

When The Pandemic Threatened His Business, This Fitness...

The Boris Bounce: Will House Prices Go Up...

Trading For The Cubs Kris Bryant May Give...