Breaking
Florida Supreme Court Tells The American Bar Association...
How to Write Perfect Paid Social Media Marketing...
How To Boost Productivity In Your Small IT...
How Restaurants Can Design a More Sustainable Food...
Expenses That Small Business Owners Need to Be...
How You Can Make Saying Goodbye To The...
Biden To Meet Royal Family At Cornwall’s Eden...
It’s Going To Be Emotional — Going International...
Peer Mentoring For Students: STEM & Buds
7 PR Trends in 2021: The Story So...
Google Plans Radical New Google Pixel Smartphone Upgrade
Where Did COVID Come From?
Ride To Growth With A Business Vehicle
C3.ai’s Tom Siebel: How To Scale AI
Moz Acquired by iContact Marketing Corp
10 Examples of Brands Using TikTok Stitch and...
Home Finance North America Overtakes Asia-Pacific In Global Wealth Race For First Time Since 2012, Report Says
Finance 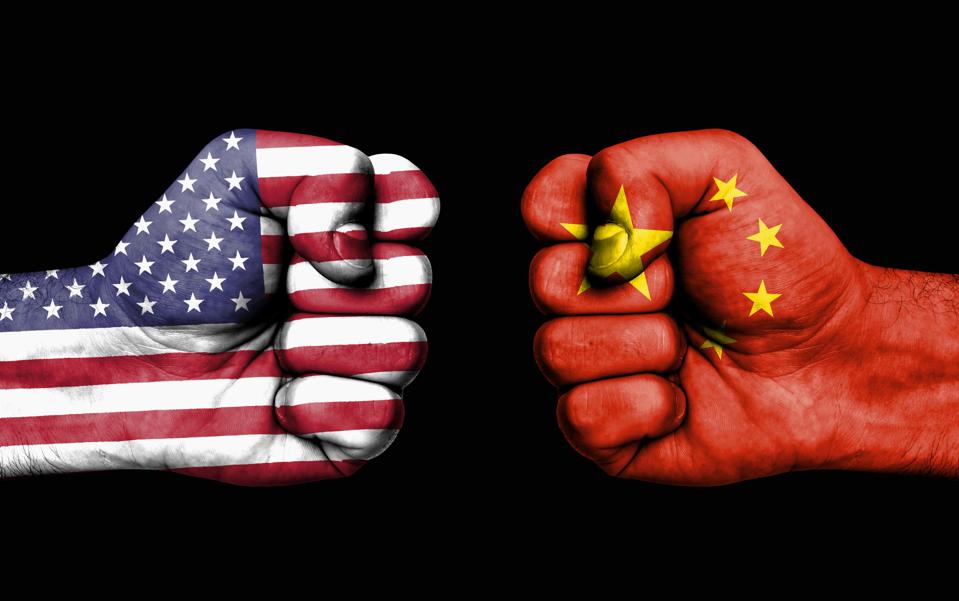 The wealth of North America’s richest people grew at a faster pace than their Asia-Pacific counterparts last year for the first time since 2012, according to research by Capgemini.

The U.S. and Canada led the way in terms of both high net worth individual (HNWI) population and wealth growth in 2019.

Capgemini’s widely followed annual World Wealth Report, released today, shows the number of HNWIs in North America (defined as having $1 million or more of investable assets) rose by 10.9% to 6.3 million. Their total worth increased by 11% to $21.7 trillion, marginally ahead of U.S. GDP, which stood at $21.4 trillion in 2019.

The surge in North American wealth generation compared to an 8.8% rise in the global HNWI population to 19.6 million, and an 8.6% rise in their total worth to $74 trillion.

The report reveals that Asia Pacific slipped to fourth in terms of HNWI wealth and population growth by region last year. It was also overtaken by the Middle East and Europe.

That said, the Asia-Pacific remains the epi-center of global wealth, with both the highest number of millionaires and the largest share of global assets. The ranks of Asia Pacific HNWIs rose by 7.6% to 6.5 million and their combined wealth increased by 7.9% to $22 trillion in 2019.

Europe saw the third-highest increases, with 8.7% more millionaires created, taking the continent’s total to 5.2 million, and total wealth up 8.8% to $16.7 trillion year-on-year. 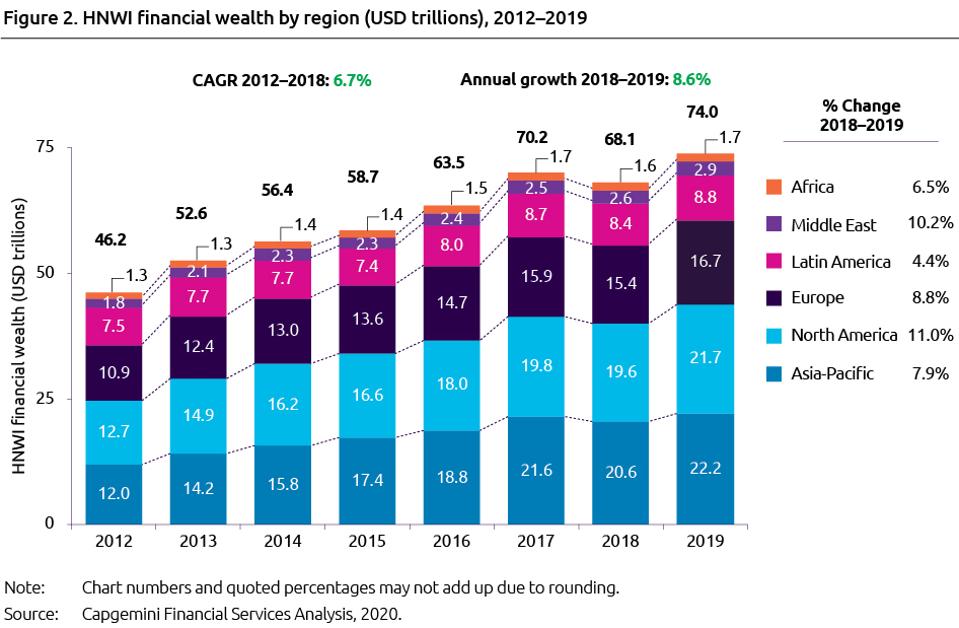 Affluent North Americans saw their wealth grow at a faster pace than the rest of the world last … [+] year.

Of course, the elephant in the room right now with any wealth survey is the impact of Covid-19 on markets this year. The research for Capgemini’s World Wealth Report was carried out in February and March and covers the calendar year 2019. The company has included an update to the report, which guestimates “a decline of 6-8% in global wealth till the end of April 2020 versus the end of 2019”.

Elias Ghanem, global head of marketing intelligence in Capgemini’s financial services division, also told me: “From our analysis of the stock market performance of key countries in the first half of the year, the markets in Asia-Pacific seem to have revived better but anything is possible in the rest of the year, depending on how the other macroeconomic variables evolve.”

Why did wealth growth in North America overtake Asia-Pacific?

The report still provides an interesting snapshot of the global wealth landscape going into 2020 though.

Capgemini cited the strong performance of domestic equity markets as the key driver behind North American wealth growth last year. The S&P 500 ended 2019 up 28.9%, powered by big tech, while the Canadian S&P/TSX Composite gained more than 19%.

North American HNWIs tend to have higher exposure to equities than the rest of the world. They had 39% of their portfolios invested in equities at the start of 2020, compared to a global HNWI average of 30%. While that strategy proved lucrative last year, it could be painful this year –unless you are Jeff Bezos– with global stock markets still in the red.

It was a much more mixed picture in Asia. China, Hong Kong, and Taiwan all saw double-digit HNWI population and wealth, buoyed by strong economic, equity, and residential property market performance. However, the region was held back as a whole by the economic slowdown and currency weakness in India, South Korea, and Singapore.

This was a marked turnaround from previous years, Ghanem said, when Asia-Pacific led global wealth growth.

“In the period from 2012-2018, key countries in Asia-Pacific such as China and India saw a tremendous boost in overall economic performance and there were years where their equity markets did exceptionally well,” he said.

“For example, in 2017, India’s market capitalization expanded by 51.3%. Similarly, in 2015, China and Japan proved to be the engines of global HNWI wealth growth, contributing about 60% to overall HNWI wealth growth. The start-up economy in Asia-Pacific has also been booming over the last decade.” 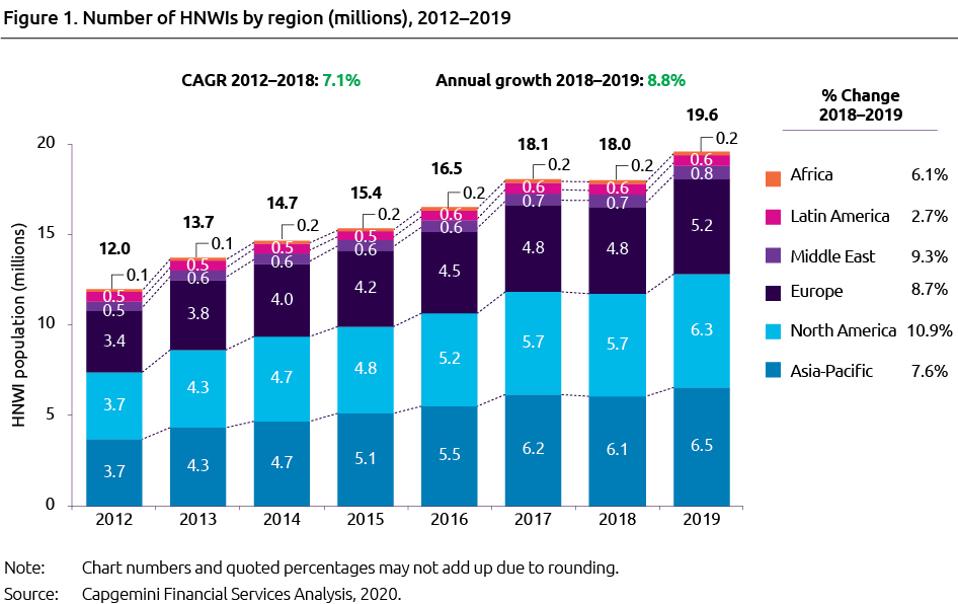 North America was the only region that saw a double-digit rise in its HNWI population last year.

Elsewhere, Europe defied its low growth reputation, benefiting from European Central Bank policy being supportive of asset prices. The U.K. saw HNWI asset and wealth growth of over 6% despite the uncertainty surrounding Brexit.

The World Wealth Report breaks down global HNWIs into three tiers and it shows both wealth and population rose pretty evenly across these. The population of ultra-HNWIs, those with $30 million or more of investable assets, increased the most, rising 9.1% to 183,400, but their wealth growth was weakest at a below-average 8.2%.

Mid-tier millionaires, with $5-30 million, grew by 8.9% in number to 1.76 million and experienced 8.8% wealth growth. The same wealth growth was enjoyed by the most populous group, the millionaires next door with $1-5 million. There are now 17.67 million of these worldwide after their ranks also swelled by 8.8%.

“Both HNWI wealth and population growth were more evenly distributed across all wealth bands in 2019. The ultra-HNWI segment was responsible for 32% of the global increase in global HNWI wealth ($5.9 trillion), whereas, in 2018, it accounted for 75% of global wealth decline.”