Breaking
Best Incentive To Get Vaccinated: Money, Messaging, Or...
Page Level Query Analysis at Scale with Google...
How A CIO Can Align IT With Business...
Blogger of the Month: Jo, Girl Eats World
6 Things Women In Business Know That Men...
How to Use First-Party Data for Ad Personalization
Pressing Reset—Putting A Fallen Unicorn Back On Its...
How We Went Viral: Promoting Content with Influencers,...
Blame Olympic Record Price Tag For Return To...
Apple iOS 14.5 Release: Should You Upgrade?
Why Gaming Gear Company Razer Launched A $50...
Technical SEO Implementations to Increase the Impact of...
30 Brilliant Ways to Market Your Eco-Friendly Shopify...
15 Tech Industry Leaders Share Overused (And Misused)...
How to Use Amazon Posts to Promote Your...
U.S. House Passes Bill To Create First Crypto...
Home Technology North American Birds Are Shrinking As The Planet Warms
Technology

North American Birds Are Shrinking As The Planet Warms

Almost 40 years of data reveal that, thanks to climate change, North America’s migratory birds are shrinking whilst their wings are growing longer – effects that may be occurring all around the world 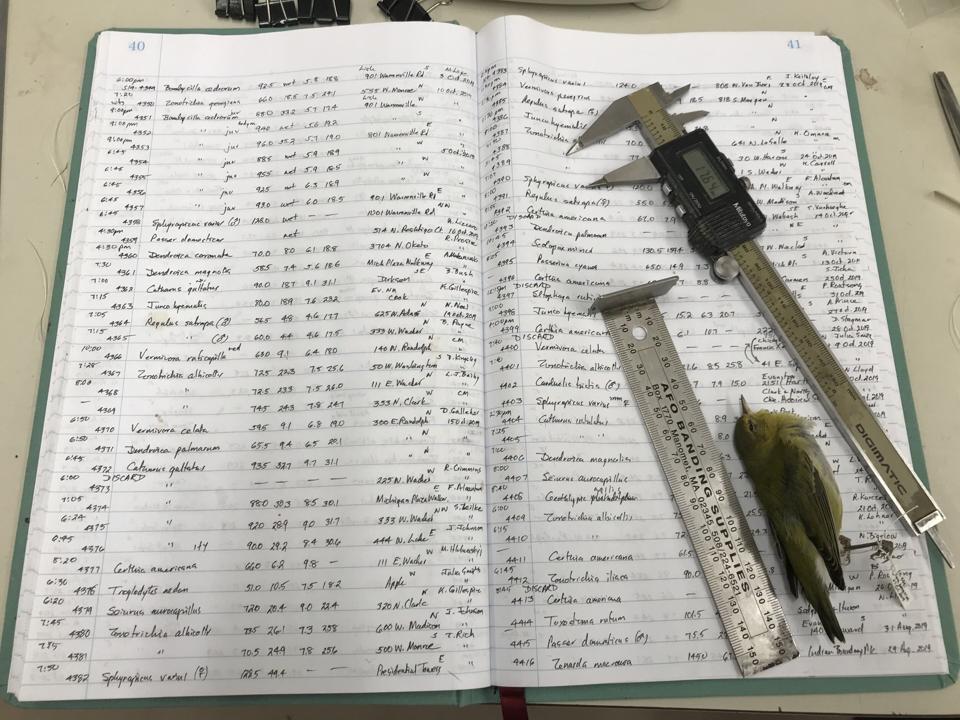 Ledgers belonging to Field Museum scientist Dave Willard that recording body size measurements, … [+] measuring tools and a Tennessee Warbler. Dr. Willard took many different measurements of 70,716 migratory birds that were killed by crashing into buildings in Chicago over a period of about four decades. (Credit: Kate Golembiewski / Field Museum)

A recently published study reveals that migratory birds in North America are shrinking, thanks to warming temperatures caused by climate change. In addition to losing body weight, the birds’ legs are growing shorter whilst their wings are growing longer.

“It started as a very casual study — someone mentioned that birds sometimes run into McCormick Place, and I was curious, so I went for a walk around the building one morning,” study co-author, ornithologist David Willard, who now is collections manager emeritus at Chicago’s Field Museum, said in a press release issued by the Museum.

McCormick Place, an enormous building overlooking Chicago’s lakefront, is the largest and most flexible use convention center in North America. Conveniently located in walking distance from the Field Museum, its vast windows are a conspicuous killer of migratory birds. (According to Dr. Willard, McCormick Place dimmed its nighttime lights about 20 years ago and the resulting bird deaths there have dropped by about three-quarters.)

“I found a couple dead birds and I brought them back to the museum — I’ve always wondered if there had been no birds that morning whether I would have ever bothered to go back.”

What began as a simple look-see soon developed into an obsession. Arising as early as 3:30 every morning in spring and autumn, Dr. Willard and a team of volunteers from the Chicago Bird Collision Monitors collected more than 100,000 birds that had collided during the previous night with McCormack Place and other buildings in downtown Chicago that demarcate the lake front.

They rescued and rehabbed the few individuals that were still alive, but for nearly all of the birds, it was too late. Chicago’s glass buildings had done their deadly job. The volunteers ended up collecting so many dead birds between 1978 and 2016 that these specimens now comprise as much as 20% of the museum’s bird collections. 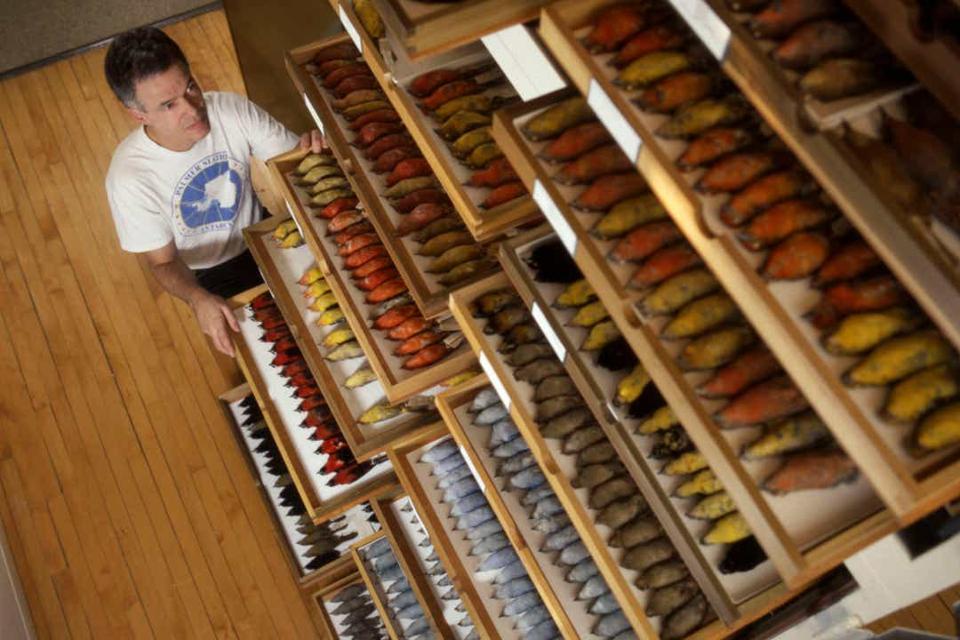 Dr. Willard measured each and every bird collected – an amazing feat in itself as well as an important feature of this particular study because the resulting data are consistent because they were collected by only one individual. In total, Dr. Willard measured 70,716 birds representing 52 species for this study and entered those data by hand into a ledger. These study birds were mostly common migratory songbirds such as sparrows, warblers and thrushes that breed in colder regions of North America and overwinter in warmer areas in Central and South America, although there were a few rarities, such as a lone yellow rail, an especially elusive wetlands bird, and the state’s first confirmed record of a Brewer’s sparrow, a small migratory songbird that’s more common in western North America.

“When we began collecting the data analyzed in this study, we were addressing a few simple questions about year-to-year and season-to-season variation in birds,” Dr. Willard said in a press release. However, data analysis revealed that these birds’ body size differences were more than simple seasonal variations. They followed a trend.

“It’s a matter of millimeters, tenths of millimeters — it’s not something you know is happening until the analysis,” Dr. Willard added. He noted that because these changes were measured in such a large sample, and in one involving diverse bird species, indicates these trends are real and widespread.

Between 1978 and 2016, the birds’ body sizes gradually decreased. For example, 49 of 52 species of birds lost an average of 2.6% of their body mass, and their lower leg bone length decreased by 2.4% across species (Figure 2). Surprisingly, 40 of 52 of the bird species’ wingspans increased by 1.3% during the same time (ref). Further, the researchers found that species with the fastest declines in leg bone length also showed the most rapid gains in wing length.

At the same time, the researchers also collected temperature, precipitation, vegetation and other environmental factors, and found that warmer temperatures were the strongest predictor of smaller body size. 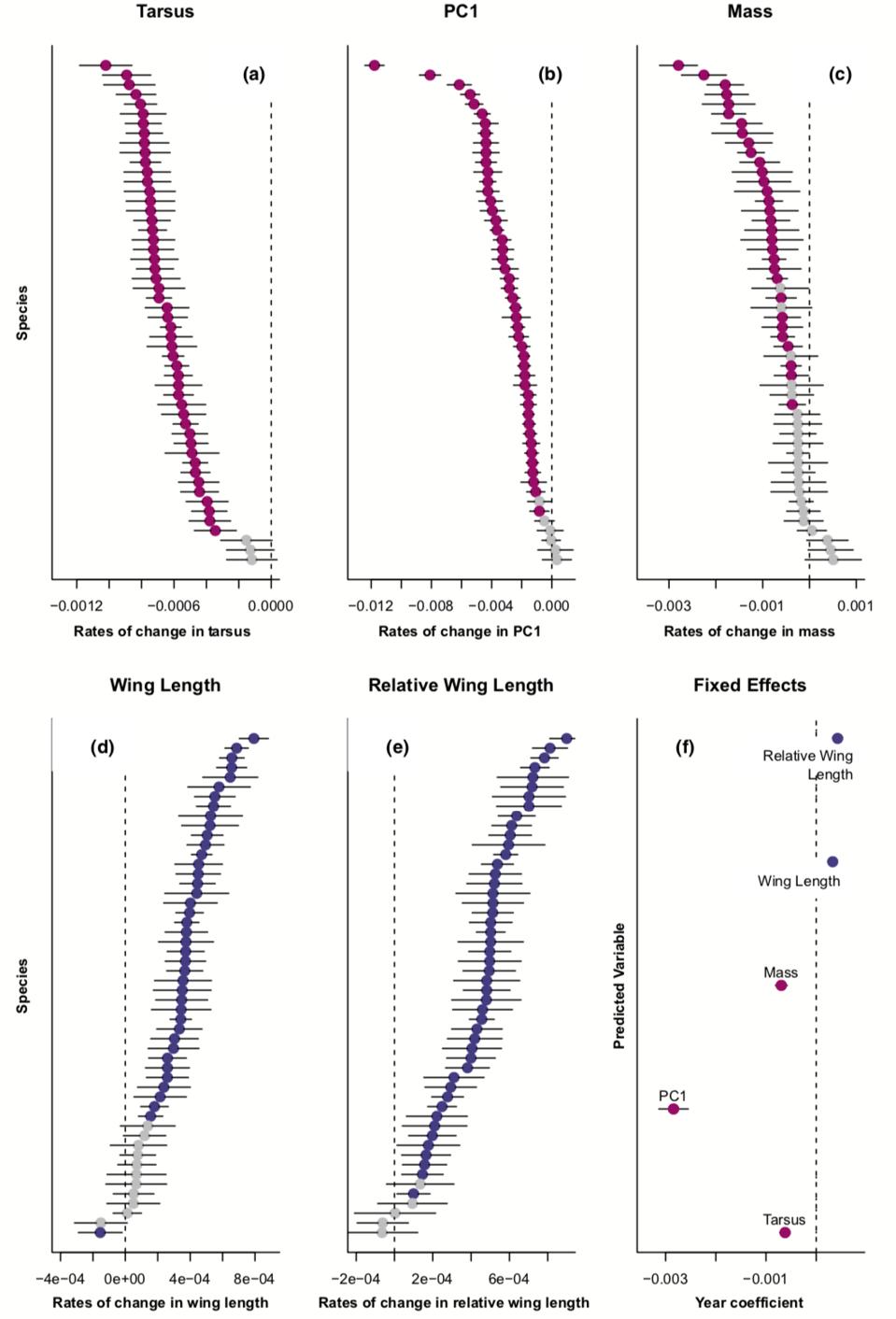 Figure 2 Morphological change has been consistent across species and metrics of body size. Across … [+] species, the rates of change in tarsus, PC1, mass, wing length, and relative wing length (represented as log(wing/tarsus)) have been remarkably consistent, with the indicators of body size declining (a–c) and wing length (d) and relative wing length (e) increasing from 1978 to 2016 in nearly all species. Points represent species-specific rates of change in each morphological trait, with the bars showing their respective standard errors, derived from the linear mixed-effects models. Grey points and bars indicate species where the standard error overlaps with zero. Note that due to the properties of ratios, modelling log(wing/tarsus) as a dependent variable is equivalent to modelling log(wing) as the dependent variable and including log(tarsus) as a predictor variable. Fixed effect estimates for year are shown for all response variables (f). (Credit: Brian C. Weeks et al.; doi:10.1111/ele.13434)

Why are we seeing such dramatic shifts in the body shapes and sizes of North American migratory birds?

The researchers suspect that these changes in body size and shape are related to climate change. Basically, as climate change causes northern latitudes to become warmer, birds with smaller bodies that are breeding in these regions are better able shed excess heat. However, smaller bodies makes it difficult for these birds to produce enough energy to fuel their long semi-annual migrations so, the researchers propose, their wings are becoming longer to compensate.

These observations are consistent with Bergmann’s rule, which describes how populations of animal species with large geographic distributions are typically observed to have a larger body size in colder environments, or in higher latitudes, compared to their counterparts living in warmer regions – a trait helps them stay warm in cold places. This body size-climate relationship was widely “known” by the historical scientific community, but this pattern was first formally described by German physiologist, Carl Bergmann in 1847. Although there are exceptions to Bergmann’s Rule, it generally applies to most mammals and birds (i.e.; ref & ref).

There is absolutely no debate in the scientific community regarding that the planet is warming, nor the ultimate cause of this warming. As people rapidly change the world, we are causing consistent, widespread – and often subtle – changes in all living beings that share their planet with us. But without long-term, broadly-based studies such as this, it’s difficult to document precisely how climate change is affecting living populations around the world.

But this study’s finding fit what has been reported by other research teams in other places. For example, this study bolsters findings by a 2017 study in zebra finches breeding in a range of temperatures across Australia. That study reported that warmer temperatures during breeding periods resulted in smaller birds (ref).

But precisely how may warmer temperatures create smaller birds? In addition to increased heat, it is possible that other effects of climate change, such as food limitation or heat stress, may lead to reduced body size.

This study adds more evidence to our growing concern for the overall long-term health of North America’s birds: a short time ago, another team of researchers documented a 29% decline in North American migratory birds over the past 40 years – a decline that is estimated to translate into a loss of 2.9 billion birds (here).

That research was quickly followed by another study by a different team in Hawaii that documented how dramatic population declines are affecting the distinctiveness of songbirds’ songs – which could negatively affect annual reproductive rates because song is critically important for attracting mates and maintaining a breeding territory (here).

Most climate change studies of animals and plants focus on shifts in geographic range, or in the timing of migration or springtime flowering. However, this study suggests that changes in body shape and size, which have been consistently overlooked, are also important aspects of how global warming is affecting wildlife. 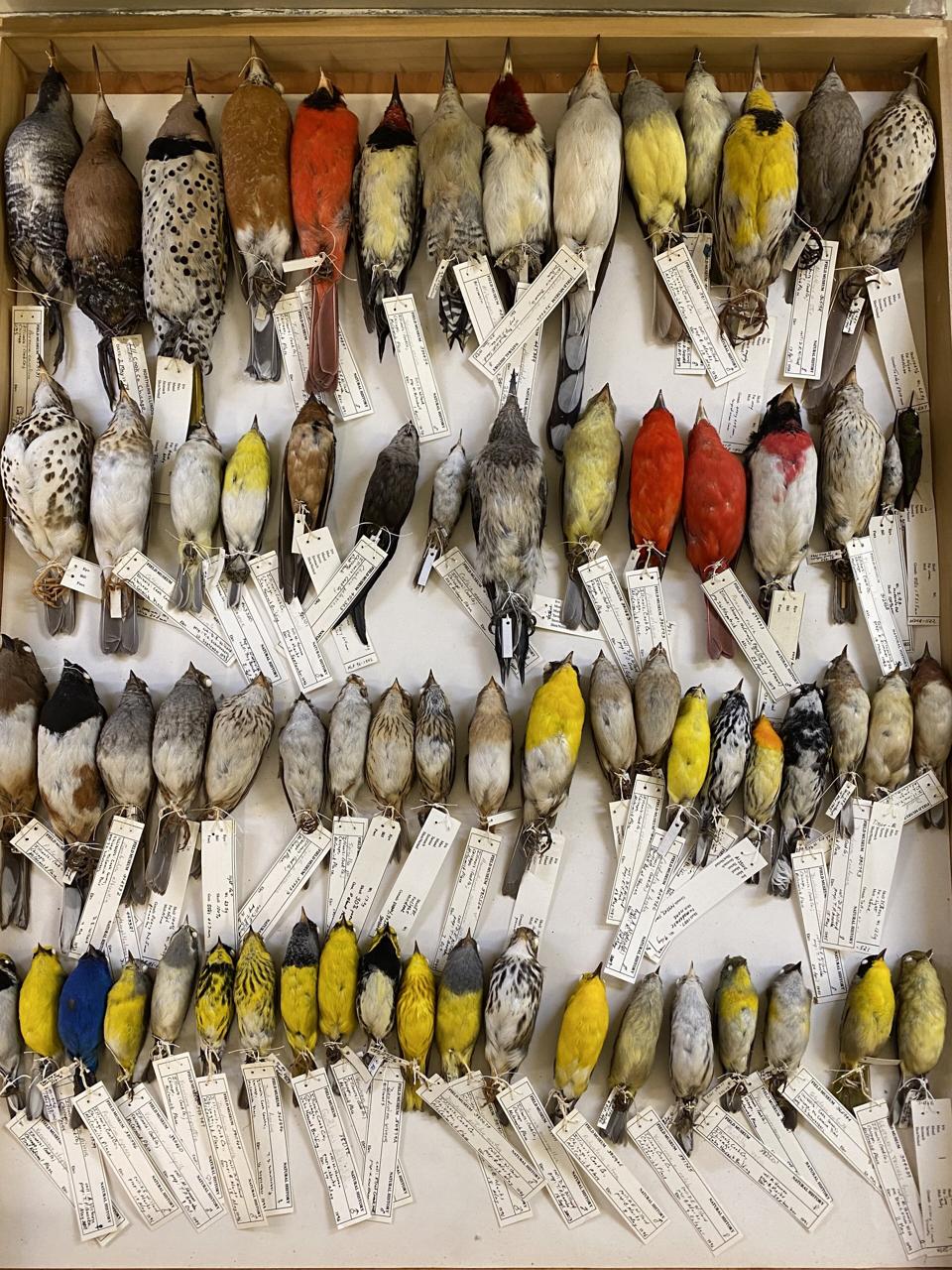 This study is a valuable reminder that museum collections hold a vast treasure trove of knowledge and discovery for present and future scholars that may not have been imagined when specimens were first being collected. It also highlights the critical importance of museums that curate and care for biological collections that provide data for studies such as this one, and the immense value of long-term studies, which reveal and document worrying patterns caused by climate change.