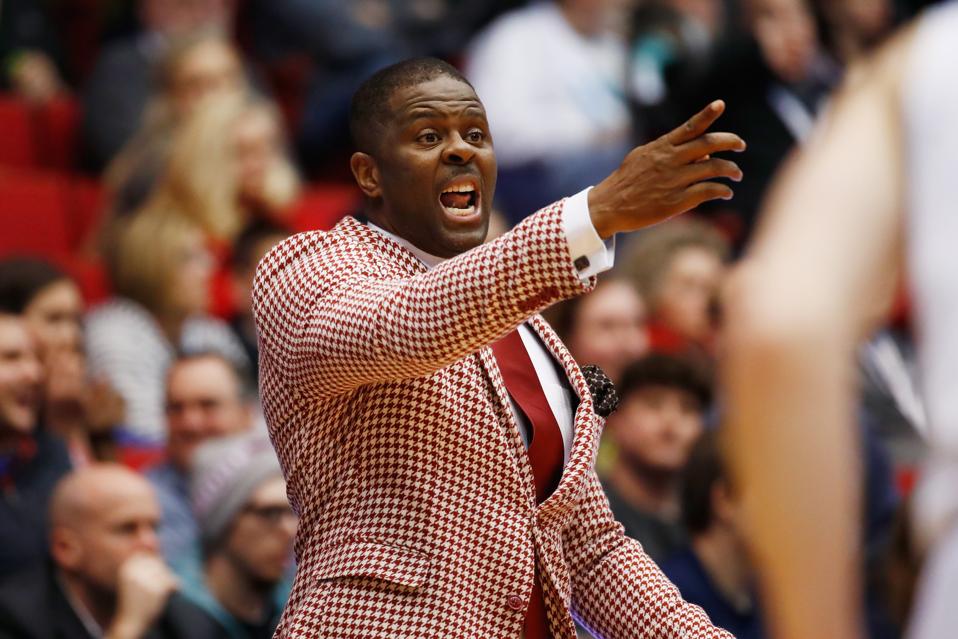 DAYTON, OH – MARCH 15: Head coach LeVelle Moton of the North Carolina Central Eagles reacts in the … [+] second half against the UC Davis Aggies during the First Four game in the 2017 NCAA Men’s Basketball Tournament at UD Arena on March 15, 2017 in Dayton, Ohio. (Photo by Gregory Shamus/Getty Images)

North Carolina Central coach LeVelle Moton has a message for white, Power 5 coaches in the wake of George Floyd’s murder at the hands of a former Minneapolis policeman.

Moton said Sunday on ESPN Radio that many such coaches have profited off African-American athletes yet remain “silent’ when black men are murdered at the hands of police.

“The reality is a lot of these coaches have been able to create generational wealth,” Moton said Sunday on ESPN Radio’s Sunday Morning. “Their grandkids’ kids are gonna be able to live a prosperous life because athletes who were the complexion of George Floyd were able to run a football, throw a football, shoot a basketball or whatever have you so they have been able to benefit from athletes that look like George Floyd and many more. But whenever people [who are] the complexion of George Floyd are killed, assassinated, murdered in the street in broad daylight, they’re silent.”

Floyd, 46, was killed by former Minneapolis police officer Derek Chauvin last Monday after Chauvin held his left knee on Floyd’s neck for for 8 minutes, 46 seconds — 2 minutes, 53 seconds of which occurred after Floyd was non-responsive. Chauvin was charged Friday with third-degree murder and second-degree manslaughter. No charges have yet been brought against the other three officers at the scene.

Jaylen Brown of the Boston Celtics drove 15 hours from Boston to Atlanta to protest, while Ohio State’s Seth Towns was detained by police Friday night for peacefully protesting. He was later released.

A number of high-profile white football and basketball coaches have issued comments condemning Floyd’s murder and offering support for their African-American athletes while saying they will personally work to further the dialogue on the nation’s racial divide.

On the basketball side, Ohio State’s Chris Holtmann, who is white, backed Towns with a statement on Saturday.

“We fully support our players’ right to peacefully protest. In the time I’ve gotten to know Seth, it’s clear that he has a heart for social justice,” Holtmann said. “As I said in my statement yesterday morning, we will continue to openly discuss this within our program. We pray for safety in our city, state, and around the country.”

Michigan State coach Tom Izzo, who is white and is one of several active Naismith Hall of Fame coaches, has also commented.

“We are all part of this and we must banish these types of injustices in not just our country, but our world,” Saban wrote. “The ultimate future of our nation is in our hands, and like the teams I’ve been privileged to coach, we must depend on and respect each other no matter our differences. We must come together as a society and treat one another with respect and dignity.”

Moton, meantime, says he still hears “silence” from too many white coaches when it matters most.

“I have a problem with [their silence] because it seems as if black lives matter to them whenever they can benefit from it or whenever they’re getting them first downs, catching an alley-oop or shooting a [3-pointer] or whatever,” Moton said. “When it’s time for humanity to speak up on behalf of the student athlete, it’s silent, it’s crickets. And my problem is if the murdering of black Americans is too risky of an issue for you to stand up as a leader, then who are they really playing for?”

Android Users Beware—You Must Not Download This Dangerous Image

Mike France: Co-Founder+CEO Of Proper Gets Granular In...

How To Become A ‘Compelled Entrepreneur’

30 Under 30 Europe: Making Manufacturing And Industry...