Breaking
Best Incentive To Get Vaccinated: Money, Messaging, Or...
Page Level Query Analysis at Scale with Google...
How A CIO Can Align IT With Business...
Blogger of the Month: Jo, Girl Eats World
6 Things Women In Business Know That Men...
How to Use First-Party Data for Ad Personalization
Pressing Reset—Putting A Fallen Unicorn Back On Its...
How We Went Viral: Promoting Content with Influencers,...
Blame Olympic Record Price Tag For Return To...
Apple iOS 14.5 Release: Should You Upgrade?
Why Gaming Gear Company Razer Launched A $50...
Technical SEO Implementations to Increase the Impact of...
30 Brilliant Ways to Market Your Eco-Friendly Shopify...
15 Tech Industry Leaders Share Overused (And Misused)...
How to Use Amazon Posts to Promote Your...
U.S. House Passes Bill To Create First Crypto...
Home Business Not Over, But Paris Transport Strikers Take A Break, 46 Days On
Business

Not Over, But Paris Transport Strikers Take A Break, 46 Days On

There is light at the end of the tunnel of the crippling Paris transport strikes, as unions vote to return to work on Monday January 19 after 46 day of strikes.

The bad news is: the hiatus in the strike that has paralyzed French rail and Paris public transport for over six weeks, may be short-lived.

In a press release on Saturday, the UNSA-RATP–the major union representing Metro and RER drivers– said workers had opted to suspend the strike from Monday “on most Paris Metro lines”.

But union officials emphasize the end of the strike is temporary, and that they are “determined to continue the struggle” over government pension reform. For strikers, it is a question of “recharging their batteries” ahead of the next “mobilization”, union spokesperson Laurent Djebali told AFP.

So Could This Be Le Fin Or Not?

It’s sounding a bit like, oui, non, oui, non. As the union’s take a breathe, and plan their next move …

For many workers Djebali added, the decision was made for “monetary reasons”.

“One can understand that some colleagues need to bail out.” Yet there was no question of this being an end to the “unlimited strike” he said. “On the contrary, as soon as our colleagues have had a breather, we will set off again, for an indefinite period.”

Things have not just been difficult for commuters over past weeks. As Euronews points out: “Workers on strike in France do not receive their salaries and unions have been collecting donations to fund the strike action.” 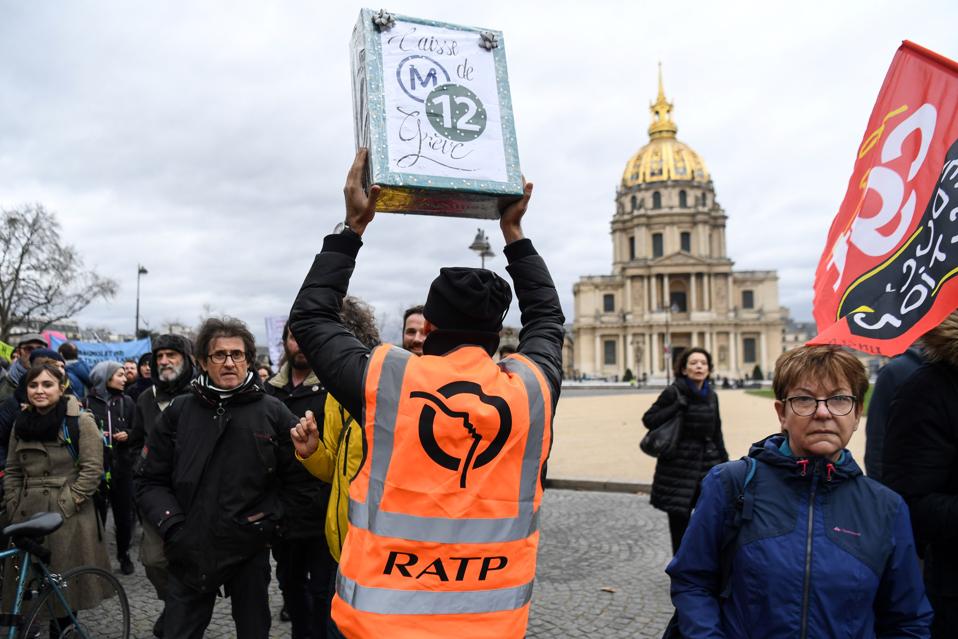 An RATP protester holds up a strikers’ donation box near the Hotel des Invalides during a … [+] demonstration in Paris on January 14, 2020

Strikers Set To Take A Pause, But It’s Far From Over

It is anyone’s guess for now what all this means. Or what lies ahead for transport in Paris next week. For Monday at least, only three of the 14 lines will be hit by strike action.

The unions say the next “mobilization” (gathering forces for industrial action) is scheduled for Friday, January 24. That’s the day French President Emmanuel Macron will formally present the pension bill to government, ahead of parliamentary debate in February.

Depending on the outcome of these crucial dates for unions, this could mean a return to strikes in Paris as we know them. 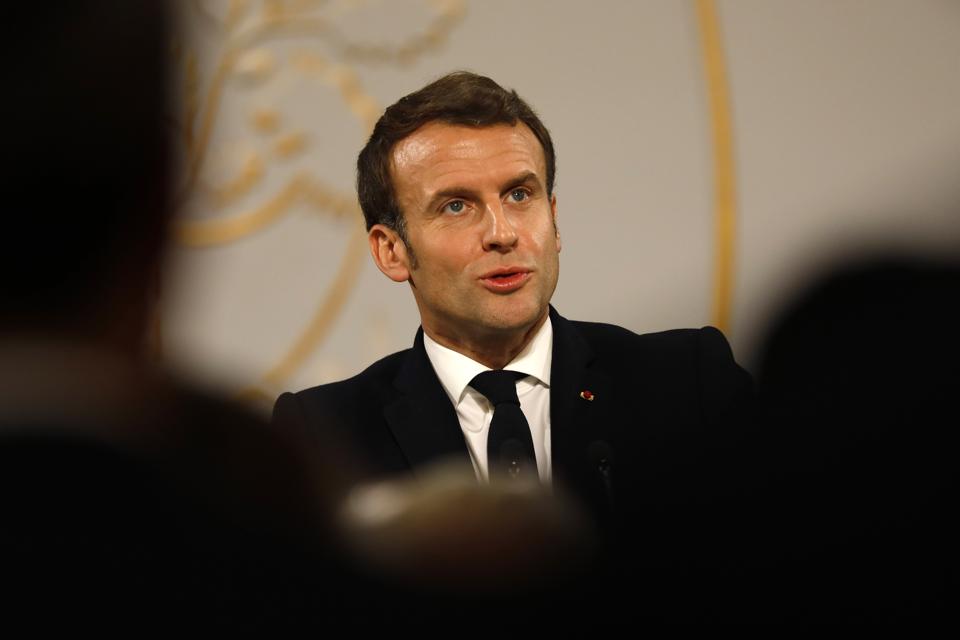 Emmanuel Macron has been facing the biggest strikes of his presidency, and the longest by French … [+] rail workers since 1968

On Sunday, 8 Metro Lines Fully Up And Running

Meanwhile on Sunday January 19, the strikes will continue, though with major improvements. The RATP transport authority says eight of 14 Metro lines will be running ‘as normal’: Lines 1, 2, 3bis, 7bis, 8, 10, 11 and 14. Disruptions will continue on the remaining 6 lines. They’ll either be operating for shorter hours or with irregular services, though again with big strides on the situation last week.

That said, several major Metro stations including Montparnasse-Bienvenüe, Gare de l’Est and Gare du Nord will be closed, while only two in three RER A and RER B will run. A similar picture for the Transilien-operated RER C and D, though its RER E will be 100% operational Sunday. 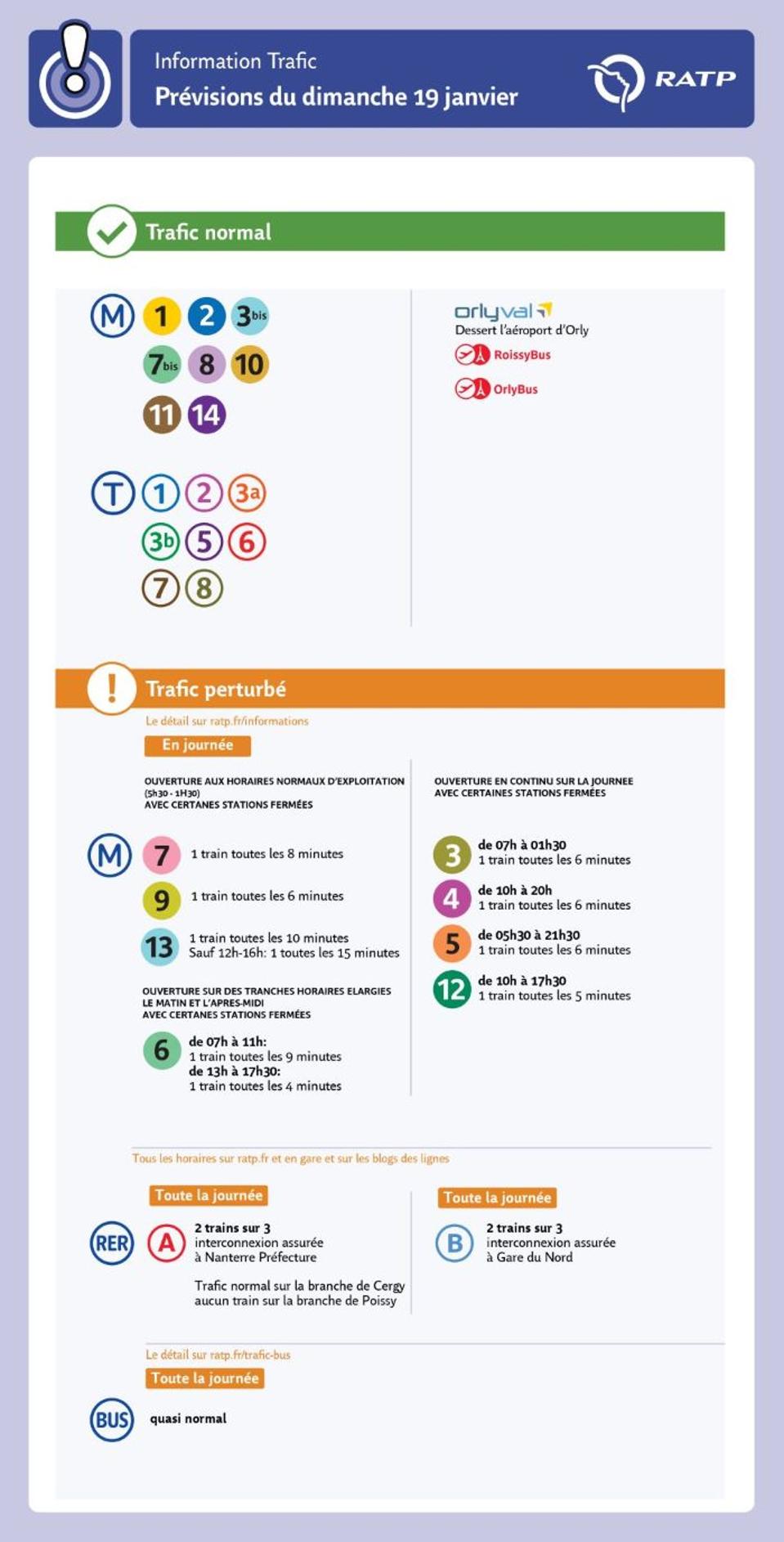 The RATP Paris public transport forecast for Sunday January 19 on the Metro, RER, trams and buses

Le Parisian says the strikes have cost the RATP more than €200 million. “On the 45th day of the strike, there seemed to be a turning point”, it reports.

If it turns out to be true turning point, France may well declare a national holiday to celebrate it, for the strikes have caused chaos and botched travel plans for locals and tourists over the December-January holiday season.

For now, the indefinite pause comes after a 47 day walkout, which brought trains nationwide, and much of the Greater Paris public transport network, to a grinding halt since December 5.

As troubles on the SNCF rails eased up over the past week for TGV and TER travelers, those on Paris public transport persisted. Despite gradual improvements, Paris commuters up until Friday January 18, still faced most subway and suburban lines running at half steam.

Though things are hazy for Monday, “a clear improvement in traffic is looming” reports Le Croix. And with that, a collective sigh of relief. 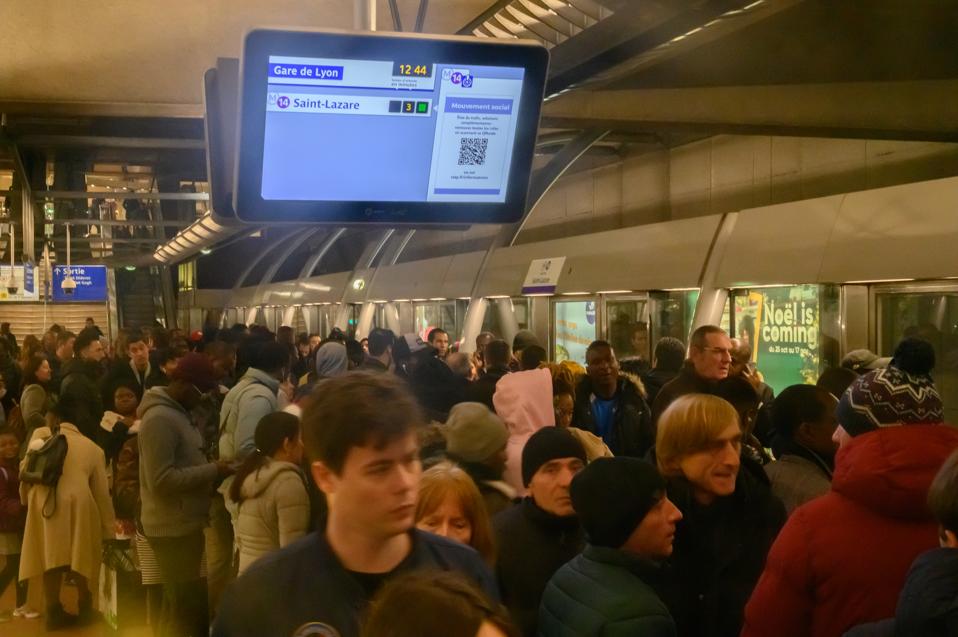 Are these crowded nightmarish scenes on the Paris Metro a thing of the past in Paris? For now maybe … [+] …

Trail Blazers’ Trade Should Help In Long Term, But Short-Term Impact Remains To Be Seen