Now Might Be The Perfect Time To Buy Newcastle United 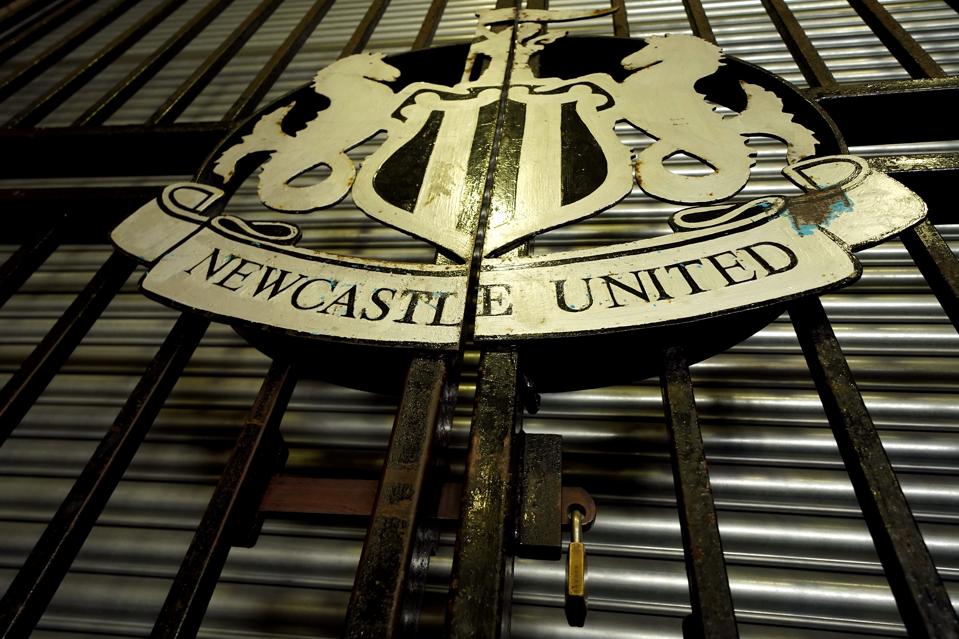 A general view of the Newcastle United sign outside St James’ Park, home of Newcastle United … [+] Football Club, following yesterday’s announcement that the Premier League has suspended all matches until Saturday April 4, 2020. (Photo by Owen Humphreys/PA Images via Getty Images)

The Premier League is in the middle of the biggest challenge it has had to face since it was created, with the COVID-19 shutdown putting clubs at risks of huge losses. But despite this, it looks like Newcastle United, who have been on the market for several years, might actually be bought by someone.

Reports of a deal between current owner Mike Ashley and a consortium of one of Britain’s wealthiest families and the Saudi Arabian sovereign wealth fund have dominated headlines on the English back pages over the last week or so, and although nothing is certain until the ink on the deal is dry, this deal does look more likely than past attempts by Ashley to sell the club.

Now seems like the worst possible time to buy a Premier League club. At best, every team will take a massive kicking from having to play games behind closed doors. At worst, if it is impossible to fulfill the obligations to TV broadcasters and the Premier League can’t work out some sort of deal, the league could be down the best part of a billion dollars. But paradoxically, this might actually be a good time to buy a club, and especially Newcastle United.

Ignoring the COVID-19 crisis, Newcastle United are in a strong position. The way Mike Ashley has run the club hasn’t endeared him to fans, but has made the team more attractive to investors. Steve Bruce has done what he has been asked to do and barring a terrible run at the end of this season, Newcastle’s Premier League status is secure. Deloitte Football Money League 2020 rated Newcastle United as having the 19th highest revenue of any soccer team in the world, just behind the likes of AC Milan. Forbes currently values them as the 20th most valuable soccer team in the world.

Newcastle have achieved this while being relatively frugal with their wages; according to Sporting Intelligence, the average first team player at Newcastle earns less than his counterparts at Wolverhampton Wanderers, Southampton, Crystal Palace, West Ham United, and a host of other clubs. Their strategy to not sign players over 30 also means their current side has a decent resale value, and they don’t have any liabilities like Alexis Sanchez on huge contracts to tie down the new owners’ purse strings.

Buying a soccer club during a global crisis might seem like an odd move, but often investors take advantage of crises to buy up assets on the cheap. Amanda Staveley, the face of the current bid to buy Newcastle United, has previously said “the time to be bold, and make investments, is when markets are volatile.”

When this crisis ends, many companies around the world will likely find themselves with new owners who took advantage of their previous owner’s temporary cashflow problems to buy themselves an otherwise sound asset on the cheap. Mike Ashley has done something similar himself in the past, buying up brands like Lilywhites and Lonsdale. In another era, he could have bankrolled Newcastle United to the league title, but the wealth of Premier League club owners now is on another level and by selling Newcastle for a bit less than he might have wanted, he can make sure the rest of his businesses get through the COVID-19 crisis.

It’s largely assumed that these new owners do have plans to bankroll Newcastle to glory. Fans on Tyneside who are celebrating this possible change of ownership will quickly turn on the new owners if they turn out to be as stingy with their spending on players as Mike Ashley was perceived to be. But assuming that the owners are willing to splash the cash to take Newcastle to the next level, now might be the best time to do it. Just as investors use crises as opportunities to scoop up distressed companies, soccer clubs without a cashflow problem can use COVID-19 to get themselves some bargains.

Soccer clubs run close to the wind, spending everything they have on players in order to be competitive. If they try to save for a rainy day, their squad will be weaker and more likely to fall down the leagues, making that rainy day somewhat of a self-fulfilling prophecy. COVID-19 will hit every single club through a lack of matchday revenue, and that is something that Newcastle’s buyers would have factored into their decision to buy the club. But it also gives them the chance to take advantage of the struggles of other clubs.

The clubs least at risk from COVID-19 aren’t those that are well run, but those with billionaires ready to throw money at them. The likes of Tottenham Hotspur or Burnley will find the next few months very tough, the likes of Manchester City and Chelsea less so. Even if clubs in the Premier League do get through the current crisis, there’s bound to be a few clubs in Europe who don’t.

If Newcastle’s owners are thinking of buying a team of players that can compete at the next level then by doing their shopping this year, they can get that team on the cheap. Teams desperate for cash will be willing to sell their top assets for less than usual, and the larger sharks will be lurking to eat these teams up. This investment could make Newcastle United one of those sharks just before feeding time.

Looking beyond the immediate crisis, there are two other good reasons to buy a club now rather than wait. Firstly, if Newcastle have aspirations of Europe then they’ll have to abide by Financial Fair Play rules. Their current financial position puts them in good stead for these rules at the moment, allowing a limited spending spree. But the current crisis could cause UEFA to give clubs more leeway over following such rules as so many teams across Europe will see large losses over the next couple of years.

Secondly, the gap between the big clubs and the rest gets bigger every year. Should a European Super League, or anything along those lines ever come into place, it would be almost impossible for the current Newcastle team to be a part of it. If the Saudi Arabian investors plan on turning Newcastle United into a superclub, then the sooner they act the better.

But while now is a good time to buy a Premier League club and Newcastle are a good club to buy, it might not be the best time for Saudi Arabia to buy Newcastle United. Oil prices are low and Saudi Arabia’s debt levels are rising. Spending money purchasing Newcastle United is one thing, but more spending will be required just to guarantee their Premier League status in the future, let alone turn them into the next Manchester City or Paris Saint-Germain. As well as checking the soccer results, Newcastle United fans might find themselves keeping their eyes on the global oil prices in the future.

Paycheck Protection Program Loans—The Good, The Bad, And The Ugly

How COVID-19 Coronavirus Is Leading To Toilet Paper...

Why Dua Lipa Is Set To Rival Ariana...

A Step By Step Guide To Building A...