Nuts May Now Have Lower Calorie Counts, Almonds 23% Less, Here Is Why 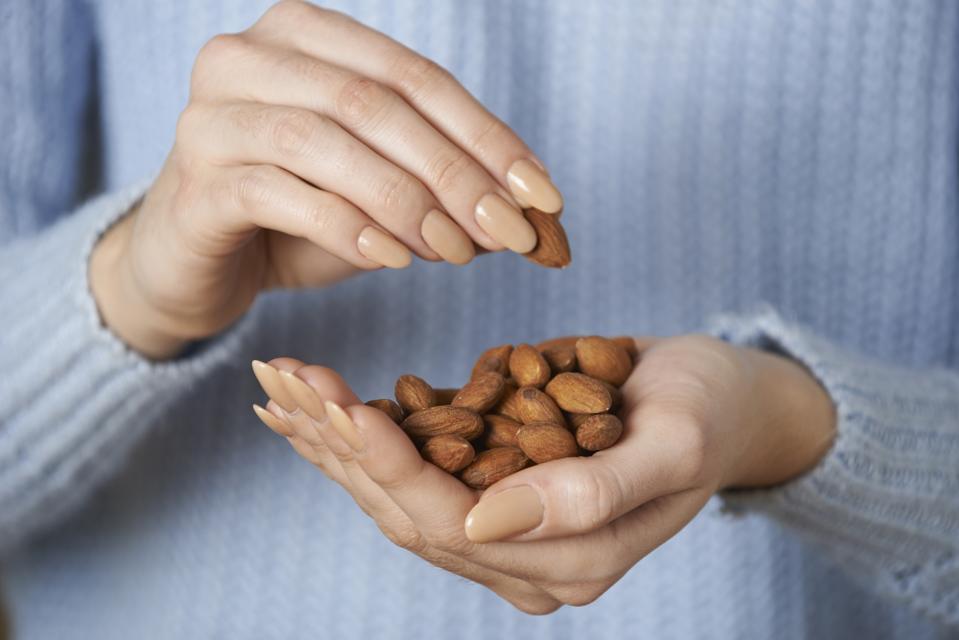 If you like to go nuts, this may be a handful of good news. (Photo: Getty Images)

If you are in the habit of memorizing KIND bar labels, you may notice kind of a drop in the calorie counts for some of their bars. Actually, in some cases, the drop can be as much as going from 200 calories down to 170 calories as seen by this graphic: 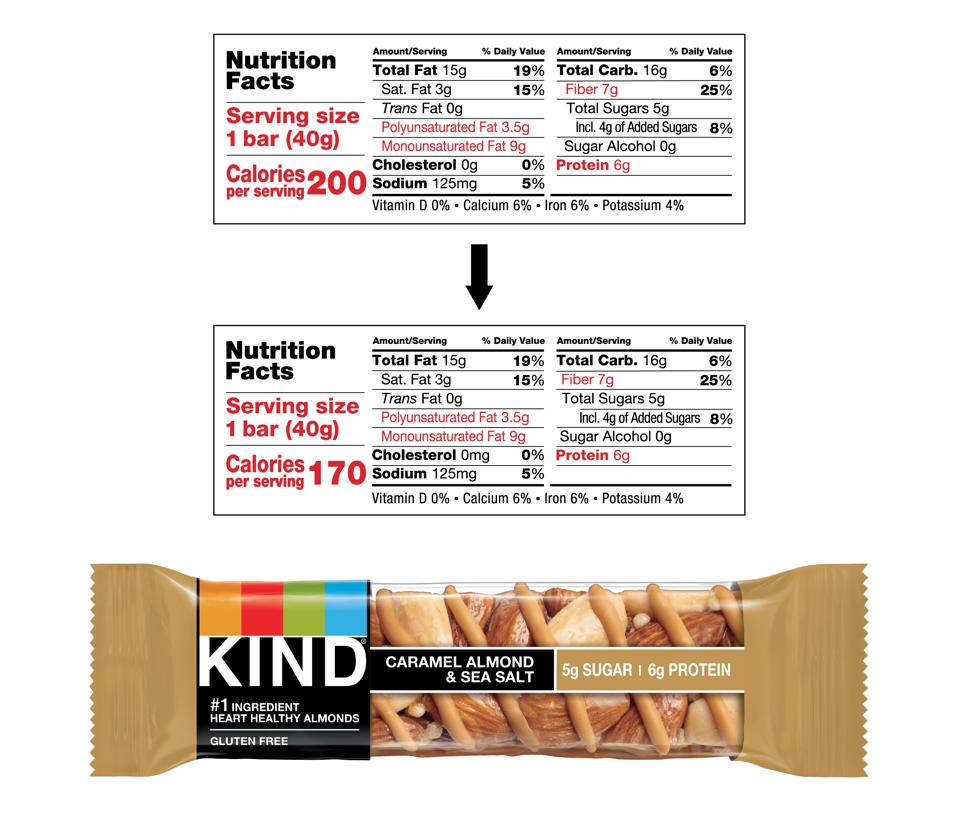 This graphic shows how the label for one KIND bar is changing. (Photo: Courtesy of KIND Healthy … [+] Snacks)

A 30 calorie drop is not insignificant. That’s over half a cucumber, depending on the size of your cucumber. The reason for the update in calorie counts is not because the bars have shrunk or that ingredients have been changed to something else like air. What’s changing is nuts. Or rather the way calories are measured for various tree nuts.

Daniel Lubetzky, founder and CEO of KIND Healthy Snacks, said that he believes that “KIND is the first snack brand to adjust the calorie counts on labels to reflect a new more accurate method of measuring calories in nuts.”

The “calorie” that appears on a food label is actually equal to 1,000 calorie energy units or a kilocalorie, as Jim Painter, PhD, RD, described for Scientific American. This is how much energy it takes to increase the temperature of one kilogram of water by one degree Celsius.

How then have people measured calories in food? Well, originally, it was the bomb. That is something called a bomb calorimeter, a sealed container that is surrounded by water. You can place the food in the container and then set it afire. When the food has been totally burned, voilà, the bump in the water temperature per water volume gives you the calorie measurement. 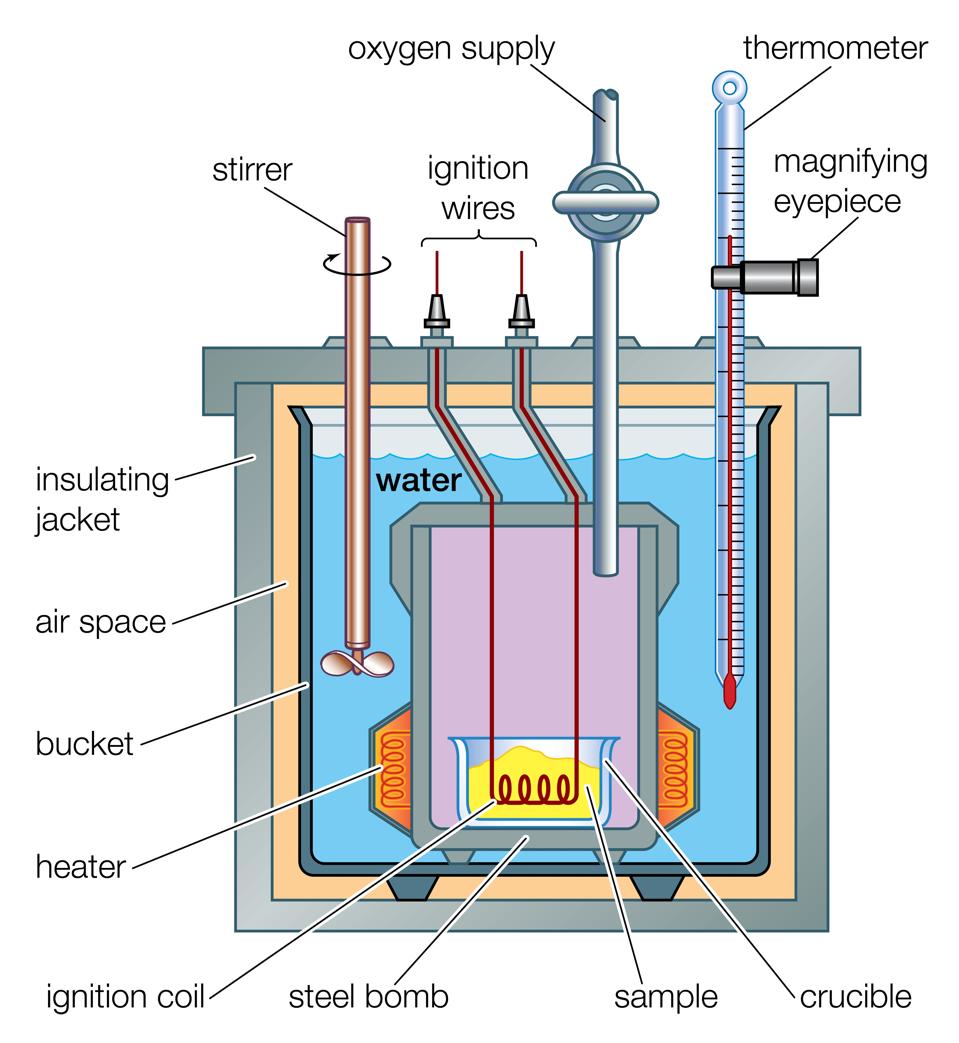 This is a cross section of a typical bomb calorimeter. (Photo By Encyclopaedia Britannica/UIG Via … [+] Getty Images)

Now, it’s not as if every food manufacturer has someone setting everything on fire. Instead, what’s typically been used is the Atwater system, an indirect way to measure calories in a food item. As Painter described, this system takes the average calorie counts for major nutrients such as protein (4 Kcal/g), carbohydrate (4 Kcal/g), fat (9 Kcal/g), and alcohol (7 Kcal/g) that were originally determined by burning them and then multiplies these averages by the nutrient content of the food item of interest. Painter gives the example of an energy bar containing 10 g of protein, 20 g of carbohydrate and 9 g of fat translating via the Atwater method to 201 kcals or Calories for the label. He added that traditionally the carbohydrate amounts used in this calculation is actually the total carbohydrates minus the amount of fiber, because fiber is not digested and tends to run right out through your poop.

Speaking of poop, this method sort of lumps together different foods that happen to provide a given nutrient. This may not be very accurate. Like people, food can be a lot more complex than just existing in the broad nutrient categories. After all, “for Valentine’s Day dinner, let’s break open some Ensure” may not go over so well. Your body handles different foods differently based on their structure, form, and many other factors beyond simple nutrient composition. Your body is not just a sealed container surrounded by water and setting food on fire. Worried about eating walnuts because of its calories? (Photo: Getty Images)

This past decade David J Baer, PhD, Janet A Novotny, PhD, and Sarah K Gebauer, PhD, from the U.S. Department of Agriculture (USDA) have gotten the poop on what actually happens to various nuts. For example, in a study published in the American Journal of Clinical Nutrition, the three researchers fed 18 healthy adults a “controlled diet” or “an almond-containing diet” for 18 days. They then did what you always do when you feed someone, collected their pee and poop. This was to analyze how much of the almonds were actually metabolized and converted into energy for the body and how much ended up being discarded from the body. Based on these measurements, the study found the energy content of almonds to be on average 4.6 kilocalories per gram, which is about 129 kilocalories per 28 gram serving. This is about 23% less than what’s calculated by the Atwater method: 6.0 to 6.1 kilocalories per gram or 168 to 170 kilocalories per serving. That would be about a 23% to 24% drop in the calorie count for almonds. In other words, the Atwater method may be overestimating the energy content or calorie counts of almonds by 32%.

This “tree-oh” of scientists did something similar another tree nut: walnuts. As detailed by a publication in the Journal of Nutrition, they found the calorie counts for walnuts to be 21% less than what was calculated by the Atwater method. 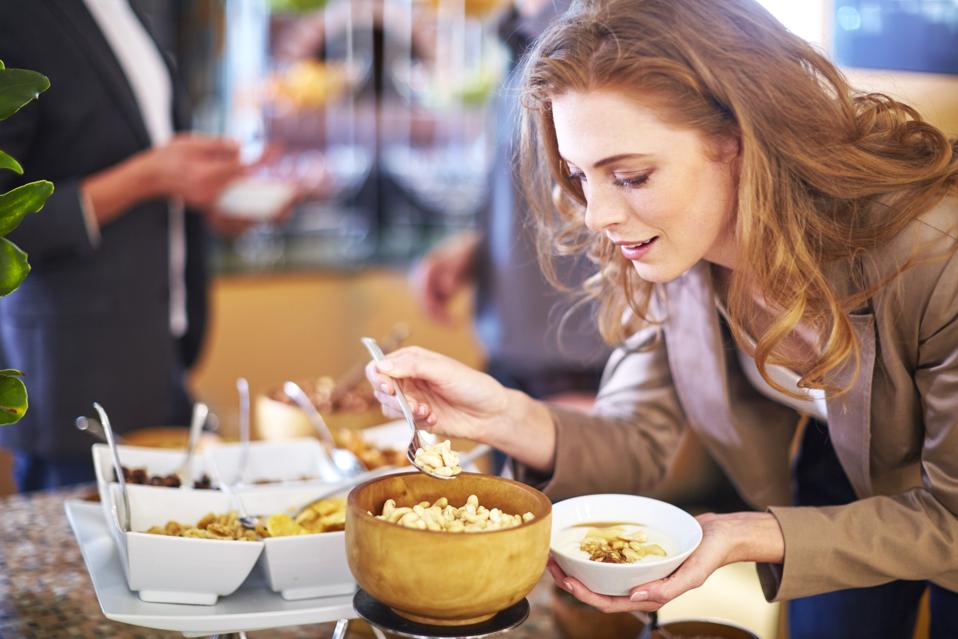 A study found that the calorie count for cashews may be 16% lower than what is typically found on … [+] food labels. (Photo: Getty Images)

All of this is good news if you would like to go nuts but are worried about their caloric content. Many nutrition experts have extolled the health benefits of eating nuts such as almonds, walnuts, and cashews. They are a good source of protein and other nutrients such as vitamin E, magnesium, phosphorus, copper, manganese, and selenium, antioxidants, and fiber.

Will new calorie counts convince you to lower the bar, the snack bar, that is, into your mouth? Well, first make sure that you check other parts of the snack bar’s nutrition label first, like the ingredients, and how much of the bar is actually nuts. “Calorie concerns may be a major reason why people are not consuming more tree nuts,” explained Lubetzky. “This more accurate way to count calories will affect about 95% of our nut bars.”

While the USDA Nutrition Database still hasn’t been fully updated, Lubetzky relayed that KIND “asked permission from the FDA and the USDA to use this new system [to count calories in nuts].” In this case, FDA refers to the U.S. Food and Drug Administration and not the Flying Dentists Association. 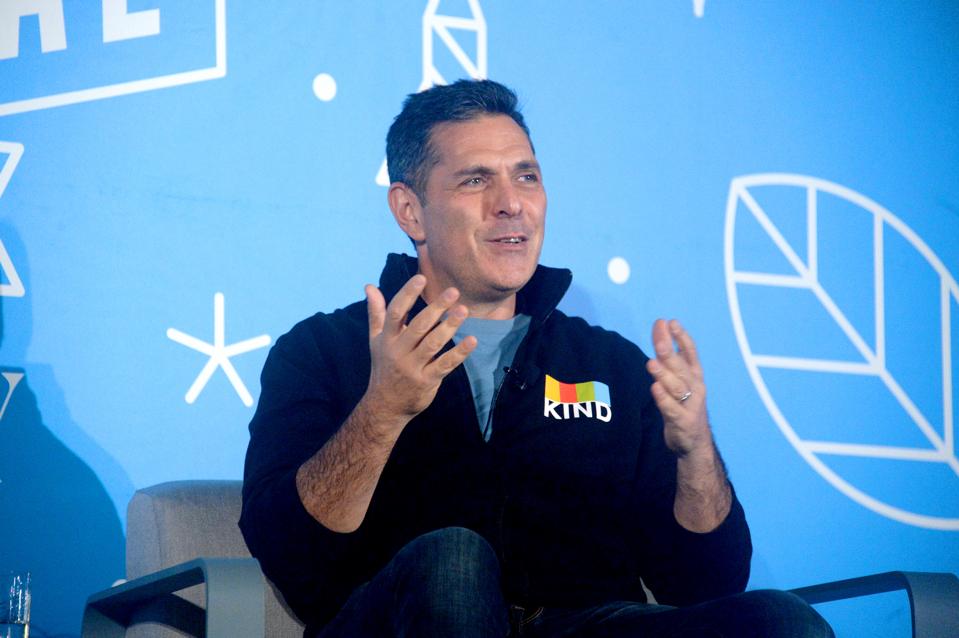 Daniel Lubetzky, founder and CEO of KIND Healthy Snacks, explained how KIND communicated with the … [+] FDA and USDA to update the calorie counts of its snack bars. (Photo by Brad Barket/Getty Images for Fast Company)

This is yet further evidence that nutrition is a lot more complex than currently understood. As I have written before, NCDs, that is, non-communicable diseases like obesity, heart disease, and cancer, have become the leading cause of death around the world. Diet can greatly affect your risk of NCDs. “Food is increasingly responsible for health and more responsible for deaths,” said Lubetzky. “All calories are not the same.”

However, as he related, “there is not enough money being spent on nutrition research. There can be an inertia and no incentive to do more research and make changes.” Lubetzky added, “over 50% consumer goods lead with sugar. Compared to refined carbohydrates, almonds and other tree nuts are very expensive.”

Indeed, no single measure can tell you everything about a food item. That would be like using the number of times you’ve watched the Twilight movies as a measure of who you are. Any single measure itself can be flawed and vary depending how you measure it. That’s why telling you to focus on just a single measure when trying to determine what to eat would frankly be nuts.

What You Don’t Know Can Hurt You: Four Items To Consider For 2020+

Put Yourself In The Hard Boiled Sleeve Of...