Breaking
Can You Settle Your Student Loans Or Negotiate...
How to Use Amazon Attribution For Ad Campaigns
How To Quickly Start And Scale Your Business
Terra Virtua: What NFTs Can Teach Us About...
5 Easy Steps To Prepare Content For E-A-T...
Physical Inactivity Linked To More Severe Covid-19 Infection...
The 2021 Estimated Tax Dilemma: What Tax-Return Pros...
Want To Digitally Transform Your Business? Start With...
How to Optimize Google My Business and Leverage...
Debunking Link Building Myths in 2021
How, When And Where You Can Gaze At...
SBA Opens $16.2 Billion Shuttered Venue Operators Grants...
What are the Essential Features of a Small...
Trends In Executive Recruiting That Will Help You...
The Growing Case For Banning Pesticides Linked To...
The Reopening High – But Long-Term Issues Cloud
Home Technology NYC Council Proposes Bonuses For Hospital, Grocery Store Workers
Technology

New York City Council will introduce legislation Wednesday requiring bonuses for workers at hospitals, grocery stores and other essential businesses; if it passes, it will be the largest-scale effort in the country to provide hazard pay to frontline workers during the pandemic. 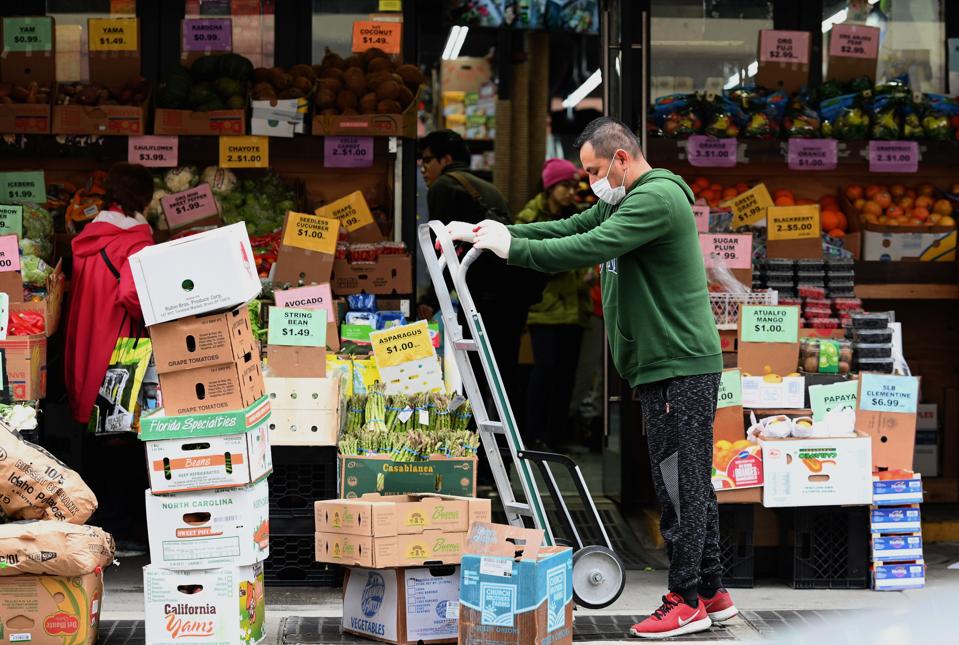 A worker stocks up on groceries at a local supermarket on March 20, 2020 in the Brooklyn borough of … [+] New York. – New York Governor Andrew Cuomo on Friday ordered non-essential businesses to close and banned all gatherings, in an escalation of attempts to contain the deadly coronavirus pandemic. (Photo by Angela Weiss / AFP) (Photo by ANGELA WEISS/AFP via Getty Images)

The bill will require essential businesses with at least 100 employees to pay workers premiums per shift based on how long they work.

If it becomes law, a frontline worker would get $75 per shift longer than eight hours, $60 for working between four and eight hours and $30 for shifts shorter than four hours.

The hazard pay measure is part of a package of legislation deemed the essential workers “bill of rights,” which also will require essential businesses of any size to provide just cause for firing employees.

The package also includes bills that would extend paid sick leave to gig workers and extend Gov. Andrew Cuomo’s moratorium on evictions, which is due to expire in June, as late as April, 2021.

After it is introduced at the Council’s meeting today, the legislation will have a hearing next week and could become law in May, says Council Member Ben Kallos, who sponsored the just cause bill.

Hazard pay for frontline workers has become a key goal for democrats across the country during the pandemic, but it has been difficult to achieve on a mass scale. Two weeks ago, U.S. Senate Democrats introduced a COVID-19 “Heroes Fund” that would provide essential workers with a $25,000 bonus, but it did not gain traction with Republicans. Last week, Sen. Elizabeth Warren (D-Ma.) and Rep. Ro Khanna (D-Ca.) introduced their own essential workers “bill of rights” that not only includes hazard pay, but would require employers to provide frontline employees with free personal protective equipment and fund their childcare expenses. It also has not yet gained Republican support. Hazard pay did not make it into the stimulus bill passed by the Senate yesterday, despite Cuomo’s call to do so.

So far, hazard pay measures have only been successful on the local level. In Charleston, South Carolina, some government workers such as emergency medical staff and firefighters have been granted extra compensation, while public school employees in San Diego who still have to interact with other people will also get hazard pay. Northwell Health, the largest healthcare provider in New York, is doling out $2,500 bonuses to its workers. If the New York City Council bill passes as written, it would apply to all essential workers in the city and would be the most expansive hazard pay initiative in the country so far. “Anything we can get done in the city we should do as a model for the country,” says Kallos.

New York City Council is overwhelmingly Democratic (out of 51 members, only three are Republicans), but don’t expect a mild debate over hazard pay. As the bill is written, the benefit would apply to all essential workers, including those like journalists and accountants who can work remotely, not just those who face greater danger of contracting the coronavirus. Reactions among council members has been positive so far, but “we have some work to do to make sure these bills work right,” says Council Member Brad Lander, who sponsored the just cause and gig worker bills.

‘Pay Them What They Deserve’: Cuomo Wants Hazard Pay For Frontline Workers (Forbes)

How Formula One Could End Up With Soccer’s Ownership Structure