Breaking
Best Incentive To Get Vaccinated: Money, Messaging, Or...
Page Level Query Analysis at Scale with Google...
How A CIO Can Align IT With Business...
Blogger of the Month: Jo, Girl Eats World
6 Things Women In Business Know That Men...
How to Use First-Party Data for Ad Personalization
Pressing Reset—Putting A Fallen Unicorn Back On Its...
How We Went Viral: Promoting Content with Influencers,...
Blame Olympic Record Price Tag For Return To...
Apple iOS 14.5 Release: Should You Upgrade?
Why Gaming Gear Company Razer Launched A $50...
Technical SEO Implementations to Increase the Impact of...
30 Brilliant Ways to Market Your Eco-Friendly Shopify...
15 Tech Industry Leaders Share Overused (And Misused)...
How to Use Amazon Posts to Promote Your...
U.S. House Passes Bill To Create First Crypto...
Home Business Oakland A’s Turn Likely Non-Tender Jurickson Profar Into A Thumping Young Catcher
Business 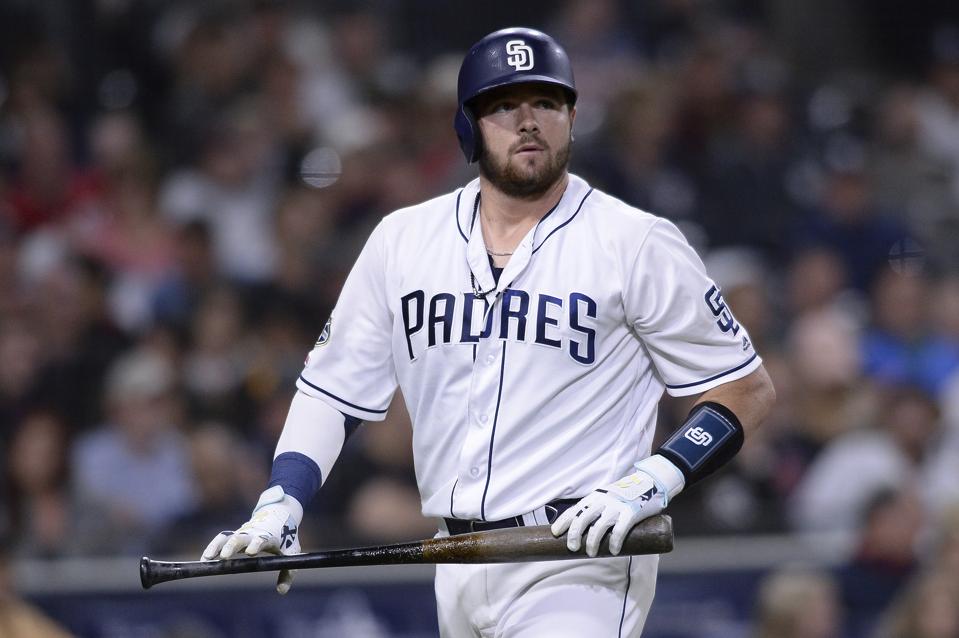 Power hitting catcher Austin Allen has been traded from the San Diego Padres to the Oakland A’s for … [+] Jurickson Profar. (AP Photo/Orlando Ramirez)

The Oakland A’s just turned nothing into something. With the deadline to decide whether they will tender contracts to their arbitration-eligible players only hours away, Oakland traded Jurickson Profar, who they were likely to non-tender anyway, to the San Diego Padres for Austin Allen, a young catcher with a big bat. The A’s will also receive a player to be named later.

While Profar has shown real prowess with the bat at times, he took a step backward on both offense and defense for the A’s in 2019. His batted ball profile suggests he maybe deserved better, but the results rarely showed up, and he also experienced issues throwing to first base. Brought in to be the primary second baseman, Profar eventually lost playing time to Sheldon Neuse (and at one point, Franklin Barreto). Those two could step in as replacements at second base, as could prospect Jorge Mateo. With Profar due an estimated $5.8 million in his final year of arbitration (according to MLB Trade Rumors), the A’s likely would have chosen to cut him loose.

Despite that, Profar apparently had real trade value, as the A’s picked up a serious bat in Allen, who turns 26 in January. He spent most of 2019 launching fly balls against triple-A pitching, slashing a fearsome .330/.379/.663. That success didn’t follow him to the majors, in 71 plate appearances for the Padres, but given time, he should be a real power threat with decent bat-to-ball skills. Where he’s lacking is on defense, where scouts have given his arm low marks. Many have wondered whether he can last behind the plate.

Still, all players offer tradeoffs, and if Allen can fake it as a catcher, the bat could make him one of the top offensive catchers in the league. With rookie Sean Murphy penciled in for the bulk of the catching duties in 2020, Allen can back him up. A’s Manager Bob Melvin could slot him in against righties (Allen bats lefty), against teams that don’t steal many bases, and with A’s starters with whom he develops a good rapport. That, plus some occasional swings as the DH should provide Allen a good number of plate appearances, assuming his performance on the field warrants it.

Allen replaces catcher Josh Phegley, who the A’s non-tendered. With Murphy and Allen both offering similar or better production for a league minimum salary, Phegley and the roughly $2 million he would have been owed through arbitration became extraneous. The A’s managed to replace one of their non-tender candidates with another, and now will figure out who plays second in 2020. A mix of Neuse, Barreto and Mateo could provide acceptable production, but none of the above have a Major League track record. Barreto has the maddening pattern of stellar minor league numbers, paired with huge strikeout rates and not much more in his many short major league stints. Neuse showed he could field, but not hit much in his short stint last season, and Mateo has never played a game in the big leagues. There are plenty of other names they could toss into the mix, if they wanted to add a free agent veteran like Brian Dozier or Asdrubal Cabrera. With the A’s looking to improve and make a run at the division, second base sticks out as an area of need. However, if the rest of the lineup is solid, this would be a good opportunity to figure out what they have in their young trio, and address the issue later if none emerge as a gamechanger. The free agent market is laden with veterans who would offer 1-2 win production, but probably not much more. A low-cost addition with bounceback upside, such as Scooter Gennett, could make sense, but a more proven bat like Cabrera could tick their projections up a win.

Whatever domino falls next, the A’s did well by turning a player they weren’t going to keep anyway into a potentially big bat at a position where big bats are hard to find.

How Regulation Of “Harmful Speech” Online Will Do The Real Harm