Breaking
ESBC Major Updates: Tons Of Heavyweight Greats Added...
How to Run Nonprofit Marketing Ads
Entrepreneurs Are Bringing Transparency To Home Buying And...
Best Incentive To Get Vaccinated: Money, Messaging, Or...
Page Level Query Analysis at Scale with Google...
How A CIO Can Align IT With Business...
Blogger of the Month: Jo, Girl Eats World
6 Things Women In Business Know That Men...
How to Use First-Party Data for Ad Personalization
Pressing Reset—Putting A Fallen Unicorn Back On Its...
How We Went Viral: Promoting Content with Influencers,...
Blame Olympic Record Price Tag For Return To...
Apple iOS 14.5 Release: Should You Upgrade?
How to Come up with Podcast Topics and...
Why Gaming Gear Company Razer Launched A $50...
Technical SEO Implementations to Increase the Impact of...
Home Business Ocean Crops: Is This The Next Frontier For Agriculture?
Business

Ocean Crops: Is This The Next Frontier For Agriculture? 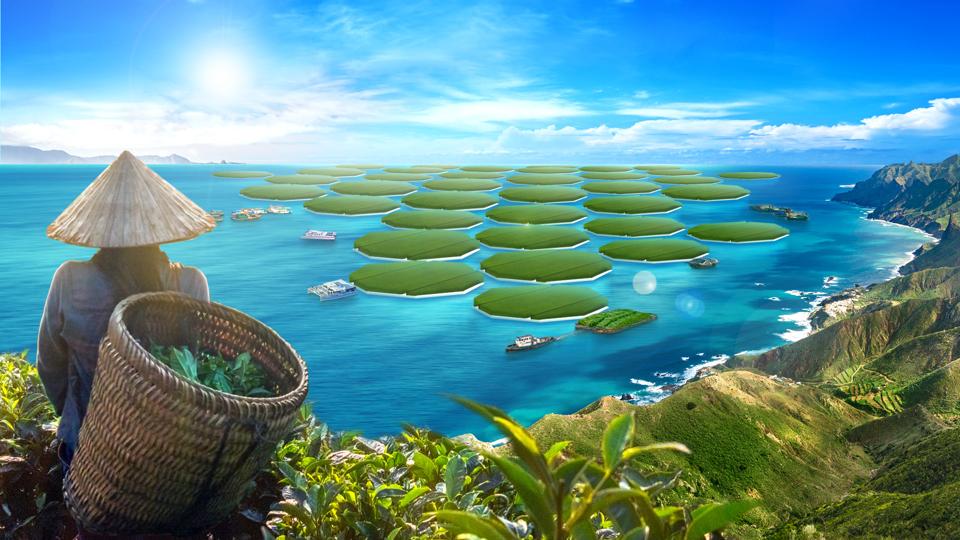 Ocean Tech Startups are now working on growing rice in the ocean on giant farms, to address current … [+] sustainability challenges.

The food and agriculture industry is undergoing a radical transformation around the world. Covid-19 has accelerated disruptions to the global food supply chain.

Structurally, this transformation is long overdue as the world heads toward a population of 10 billion over the next thirty years. In addition to meeting growing demand, this transition is also being driven by environmental pressures, given the large footprint that global agriculture is having on the planet with freshwater usage, global pesticide and fertilizer usage, soil quality degradation and devastation of many natural habitats that are being turned into mono-crop farmland.

The shift in agriculture is also being enabled by the invention of new technologies amid the Fourth Industrial Revolution, such as precision agriculture, drones, satellites, big data, machine learning, autonomous farming machinery, synthetic biology and vertical farming.

If done effectively, ocean crop farming could also become a sustainable tool to help fight the effects of climate change whilst also addressing the emerging nutrition and water scarcity crisis.

Growing crops in the ocean 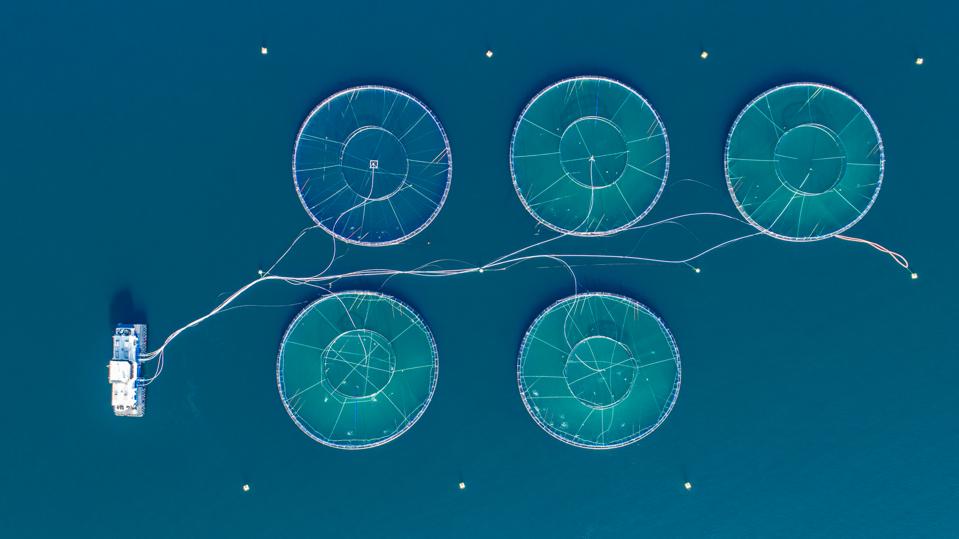 Norway is one of the leading investors in aquaculture technologies. Image of Salmon Fish Farm in … [+] Bergen, Norway.

The ocean has historically been a primary source for protein (predominantly fish). It is estimated that there are over 60 million employed in the fisheries industry around the world. Most cultures have looked at various species of fish from the ocean over many centuries, and new technologies in the past 70 years have enabled industrial fishing fleets to venture further and deeper to extract this fish.

With the percentage of fish stocks within biologically sustainable levels falling from 90% in 1974 to 65% in 2017 according to the UN’s Food and Agricultural Organization (though some NGOs suspect this number to be much lower), there is an urgent need to develop more sustainable alternative proteins, as well as consider how these fishing communities could otherwise be employed.  Aquaculture, or fish farming, has been one response to the declining productivity of wildcatch fisheries, but has had its own challenges.

Moving from proteins to crops from the ocean could be an important pathway for sustainability, economic, political and social cohesion reasons. 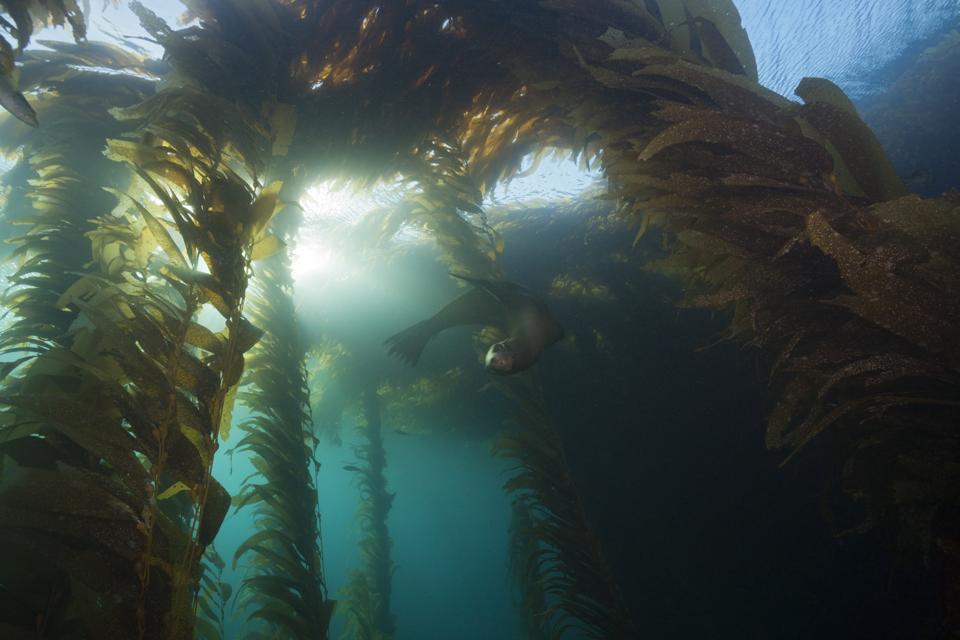 In some cultures, seaweed and kelp farming has been an important part of the diet for many centuries. There are an estimated 11,000 species of seaweed around the world that have currently been discovered. 221 species of seaweed are of commercial value and ten are extensively cultivated. Some seaweed ecosystems are at risk, like the Giant Kelp Forests off the coast of California where individual stems can grow at an incredible 2 feet a day, whereas other ecosystems are abundant and carefully regulated to ensure the seaweed is sustainably-sourced.

The seaweed industry is estimated at $6 billion a year and expected to double in the next few years. Seaweed farms have been rapidly expanding in China, Indonesia, the Philippines, South Korea, Norway, Canada, and new regions have been developing industry clusters in various parts of the world.  The United States is only just beginning to take notice of this sector.

Products from seaweed have now been identified as a critical input for a range of new industries, such as food supplements, fertilizers, medication as well as a more sustainable packaging alternative to plastics.  Innovative new organizations like GreenWave are developing open source integrated vertical ocean farming techniques centered around kelp to ensure their aquaculture systems are more sustainable. 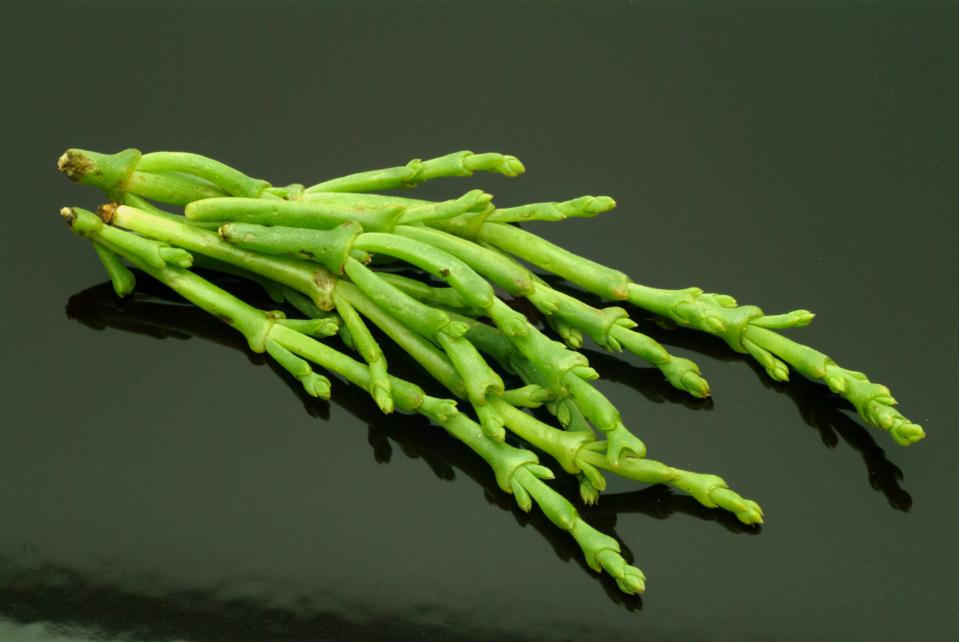 Salicornia – or Sea Asparagus – is rapidly growing in popularity as an ocean vegetable.

In other areas, farmers are now starting to explore new marine plant species from the ocean. Off the coast of Florida, farmers have been looking at marine crops like Salicornia, nicknamed ‘sea asparagus.’  In a recent trial in Florida, it took just 10 weeks for the sea asparagus to grow by 1kg.  Such crops have more distinctive tastes and potentially greater health benefits given the trace minerals found in seawater.

As marine exploration expands, there is likely to be a lot more plants from the ocean that had been historically overlooked but could now be suitable for human consumption.

Great care would need to be taken that such species are rapidly replenishable and farmed sustainably, to avoid creating another unintended crisis.  However, identifying such plants and growing them sustainably could open up new opportunities. 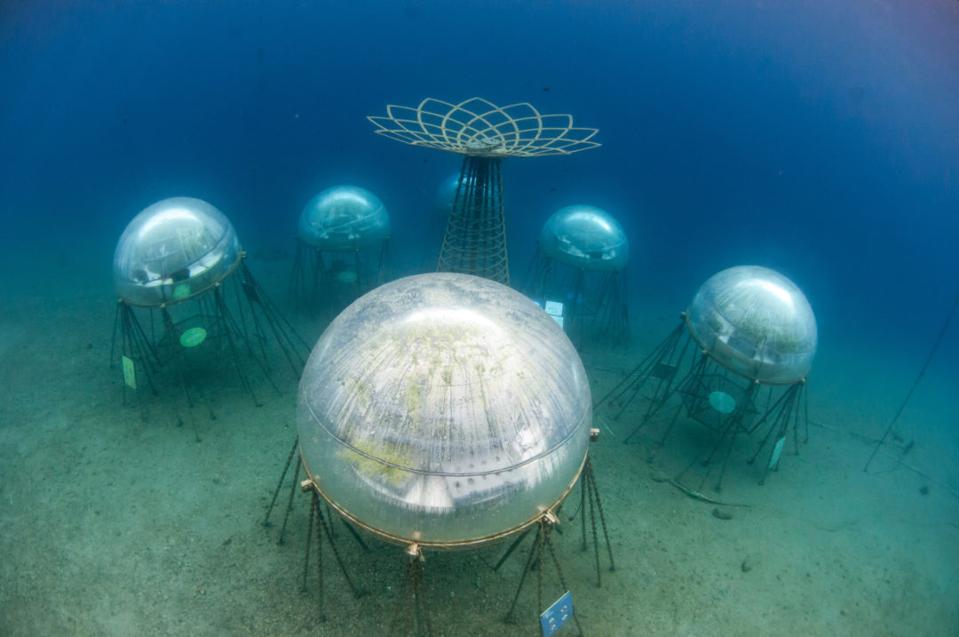 The Nemo Garden project off the coast of Italy is growing strawberries, orchids, lettuce and basil … [+] on the ocean floor.

Going further, a new set of entrepreneurs are developing radical breakthroughs in the ocean agriculture space.

These ocean innovations are now allowing land-based crops to be grown on the surface and even on the ocean floor, which would once be more commonplace in a sci-fi piece such as Jules Verne’s 20,000 Leagues Under The Sea.

Off the coast of Italy, the Nemo’s Garden Project by Italian ocean diving company, Ocean Reef Group, has been experimenting with growing strawberries, orchids, basil and lettuce in pods on the ocean floor since 2012. 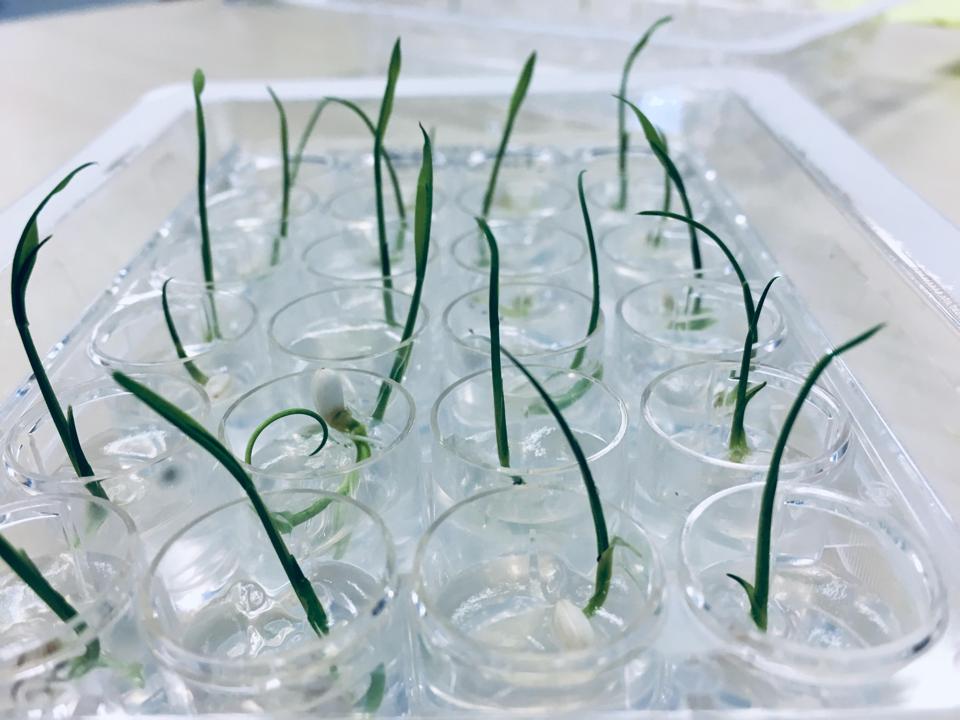 Rice seedlings being cultured and tested by Agrisea for different ocean conditions.

Using the latest synthetic biology techniques, and building off advanced autonomous aquaculture equipment, one of the latest graduates from the San Francisco-based Synthetic Biology Accelerator, IndieBio, is helping to define this new ocean crop industry.

The Canadian startup with British-founders, Agrisea, is pioneering the growth of rice on the ocean.  With the growing need for calories, and greater pressure on land to grow such crops, given water shortages, the ocean could provide a new horizon for rice growing.

By starting with rice, they are looking at how resilient the rice is to the ocean’s saline conditions and ensuring the right machinery can be used that can weather storms suitably.  These are the challenges that the aquaculture and offshore wind sectors have had to address.

Solving both the Food and Climate Crises together 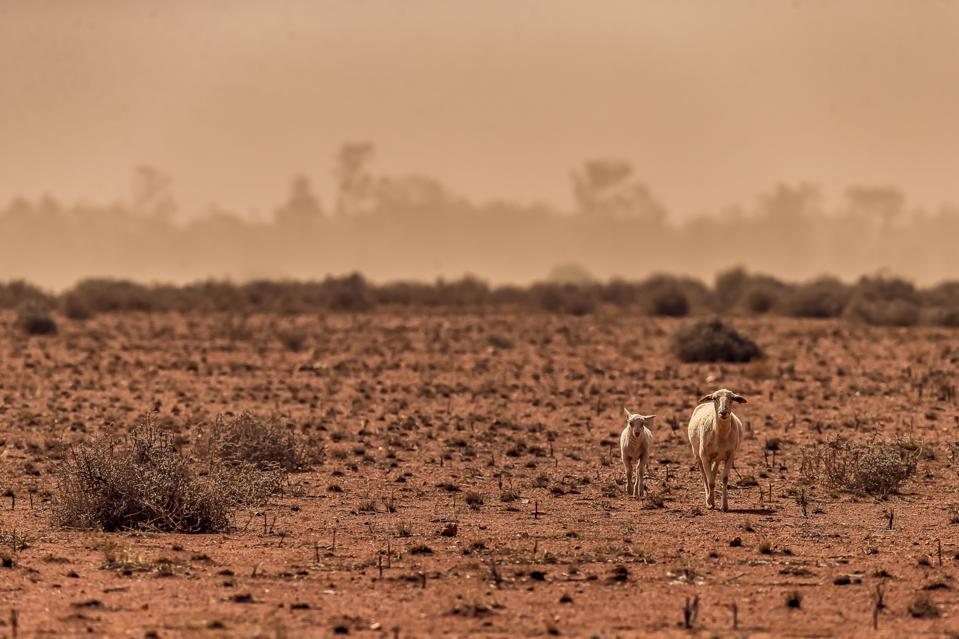 It is estimated that 90% of the planet will experience some form of water stress by 2050, unless … [+] radical new technologies and water management techniques are developed.

CEO and Co-Founder of Agrisea, Luke Young, believes that growing rice on the ocean can solve two major challenges.  “It can address both the food crisis the world faces, as well as be a source of blue carbon, or absorb carbon dioxide from the atmosphere and the ocean.”

One third of all man-made carbon emissions are absorbed by the ocean. This is amount is increasing at an alarming rate as the atmosphere becomes saturated.  The effects are leading to the ocean becoming more acidic which impacts a variety of marine life, such as coral reef systems, shellfish and can lead to additional planetary complications. In addition to becoming more acidic, our oceans are becoming warmer.  More than 90% of the warming that has happened on Earth over the past 50 years has occurred in the ocean. Indeed, more heat is contained in the top ten feet of the ocean than the entire atmosphere, and this rate is increasing.

To avoid runaway climate change, technologies will need to developed that can safely extract this carbon and turn them to other uses. 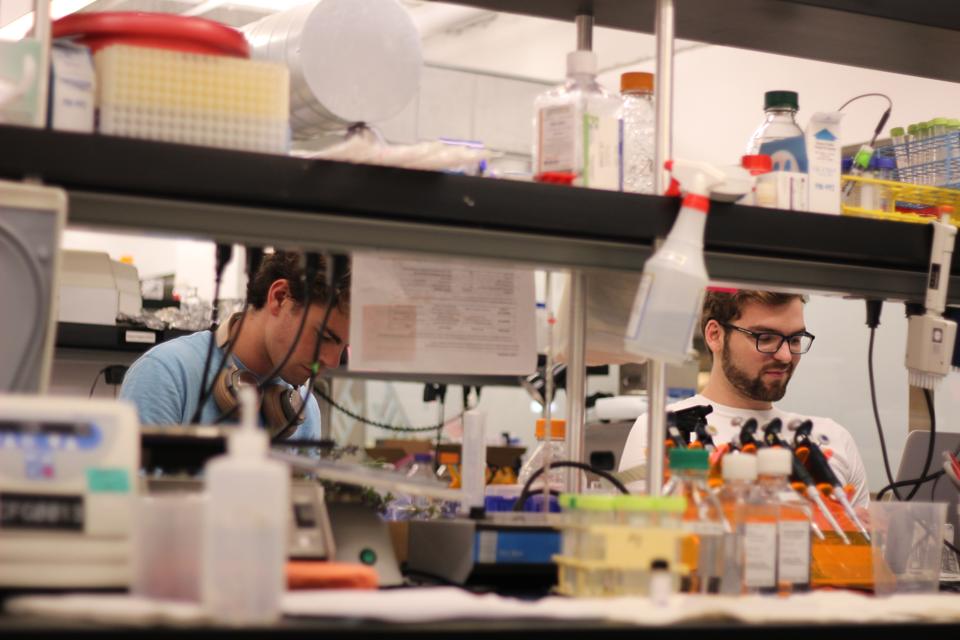 Co-Founder and Chief Scientific Officer, Rory Hornby, also recognizes the need to be careful with these technologies.  “We recognize that we are pioneers in this sector, so we have the ability to shape a new industry.  We want to be thoughtful that any technologies we develop for the ocean minimize the amount of chemical fertilizers, pesticides or other materials not natural to the marine habitat. We are also mindful of developing technologies that do not harm or impact the marine environment.  In fact, we have seen how such floating islands can become habitats for birds, fish and other marine life.”

There is clearly a long way to go before this technology becomes mainstream.  However, with only thirty years until the world’s population becomes 10 billion, and the fastest growth of middle-class households coming from South East Asia, this could be a unique solution to an important region of the world.

It would then force many Governments to start taking the cleanliness of their coasts much more seriously if such food can be safely grown off their coasts, rather than risk having high microplastic and other pollutant content in these ocean crops.

With Covid-19 showing us that the world needs bolder ideas to address big global challenges, such ‘Moonshot Thinking’ to develop a radically new industry, could be the sort of solution the world may need. 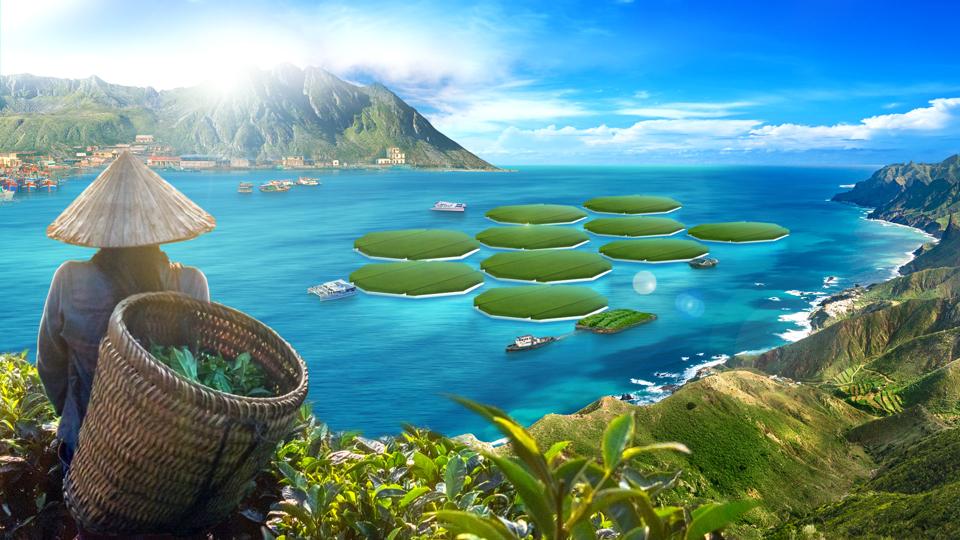 Agrisea CEO Luke Young thinks that, “In 30 years time, it will be normal to see large floating crop islands off the coast of many countries, growing a variety of crops suitable for the marine environment.  The technologies we are developing for Ocean-Rice will also be suitable for a range of other crops that could one day be grown offshore.”

As the world starts to imagine a better future coming out of Covid-19, it may well be one where we find crops that are sustainably and cleanly ‘Made in the Ocean’ on your local supermarket shelves, that are also absorbing carbon and creating new marine wildlife habitats.  Just one example of how the world can ‘build back better.’