Breaking
Everything You Need to Know About Corporate Social...
Is Adaptive Leadership the Key to Motivating Employees?
Why business events are set to return with...
Business events set to return with a bang!
Expanding Internationally: 5 Things to Consider for eCommerce...
How the Machine Shop Is Going Digital in...
Sustainable Food Packaging Is Helping the Hospitality Sector...
Top 5 Investment Practices To Make More Money...
Managing IT Requirements for SMEs: 5 Aspects that...
How To Build a Successful Luxury Brand In...
Finding The Best Google AdWords Consultant for Your...
8 Top Tips To Help Your Agricultural Business...
Three Reasons Why Office Décor and Design Are...
Looking To Improve Efficiency In Your Business? Here’s...
AI and machine learning for business
How Social Media Changed the World
Home Business Of AJ Hinch’s Suspension, And His Infamous Last Words During An ALCS Game 4 Press Conference
Business

Of AJ Hinch’s Suspension, And His Infamous Last Words During An ALCS Game 4 Press Conference 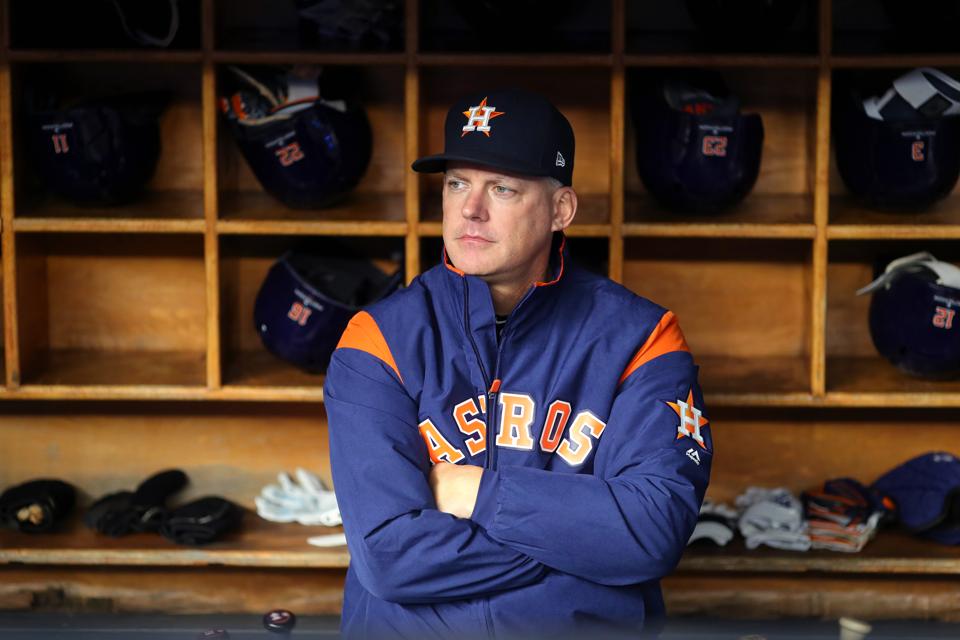 BRONX, NY – OCTOBER 18: Manager AJ Hinch #14 of the Houston Astros looks on from the dugout prior … [+] to Game 5 of the ALCS between the Houston Astros and the New York Yankees at Yankee Stadium on Friday, October 18, 2019 in the Bronx borough of New York City. (Photo by Alex Trautwig/MLB Photos via Getty Images)

Baseball’s pre-game postseason press conferences are designed to be as dull as the games are intended to be compelling. One or two representatives from each team dutifully sit at a podium in a cavernous conference room filled with dozens of media members. A moderator selects one reporter at a time to receive a microphone and ask a question. Most of the queries are not that interesting because the whole world will have access to the answers within an hour and who would want the whole world to figure out his or her unique story idea?

It’s a sterile, vanilla and dry operation calculated to wring the candidness out of interviewers and interviewees alike. These press conferences require mandatory attendance solely on the off-chance the manager walks in and announces he had to scratch that night’s starting pitcher because he got eaten by a bear or something.

Or on the off-chance a manager is going to utter words that make him look hypocritical and foolish not even 100 days later.

A seemingly routine press conference prior to Game 4 of the AL Championship Series at Yankee Stadium ended up resonating Monday afternoon, when now-former Astros manager AJ Hinch’s words came back to bite him in baseball’s most infamous episode of Cold Takes Exposed.

In the span of a little more than an hour, Hinch went from one of the most entrenched managers in baseball to the sport’s version of Sean Payton to out of work. Shortly before 2 PM, The Athletic reported Major League Baseball commissioner Rob Manfred suspended Hinch and general manager Jeff Luhnow for the 2020 season for their inability to stop the Astros’ sign-stealing operation during the 2017 season, when the Astros won the first championship in franchise history, as well as the 2018 regular season. The team was also docked its first- and second-round picks in the 2020 and 2021 drafts and fined $5 million.

Just after 3 PM, Astros owner Jim Crane delivered the second blockbuster news of the afternoon — really, this was a chaotic day even by the standards of the 2020 news cycle — by announcing he’d fired Hinch and Luhnow.

The short time it took for Hinch to go from suspended to unemployed was more than enough time to conjure up memories of his pre-game presser 88 days earlier. The session began with Hinch being asked about anonymous accusations made by the Yankees, who believed the Astros were stealing signs and picking up pitches and relaying the information to their batters via a series of whistles and banging sounds in the dugout.

Hinch, clearly expecting to field a question about the story as he took his seat at the podium, adjusted the microphone, crossed his arms atop each other and smirked.

“Man, I’m glad you asked that question, and I thought it would come up today,” Hinch said. “And we talked about this the other day. And, in reality, it’s a joke.”

Apparently not. As it turned out, the Astros were well-practiced in utilizing dugout noises to relay signs to the batter. The nine-page report released later Monday by Manfred confirmed what The Athletic initially reported in November, when it first broke the news of the team’s equally advanced and rudimentary method of stealing and delivering signs. (Twitter/YouTube personality Jomboy subsequently broke down the at-bat detailed in the story, a battle between White Sox pitcher Danny Farquhar and Astros designated hitter Evan Gattis)

As Manfred wrote Monday: “One or more players watched the live feed of the center field camera on the monitor, and after decoding the sign, a player would bang a nearby trash can with a bat to communicate the upcoming pitch type to the batter.”

Hinch’s words didn’t age any better from there as he suggested it was impossible for the Astros to cheat even if they wanted to do so.

“But Major League Baseball does a lot to ensure the fairness of the game,” Hinch said. “There’s people everywhere. If you go throughout the dugouts and the clubhouses and the hallways, there’s like so may people around there that are doing this.

“And then when I get contact about some questions about whistling, it made me laugh because it’s ridiculous. And had I know that it would take something like that to set off the Yankees, or any other team, we would have practiced it in spring training. And we would have got — it apparently works, even when it doesn’t happen.”

That’s the ol’ indignant “we can’t be cheating because we didn’t win one specific time” defense. The Yankees believed the Astros were stealing signs in Game 1 of the ALCS, which the Yankees won 7-0.

“Now, the game in question, we got three hits and no runs,” Hinch said. “And so nobody heard it. You guys have audio, video, people in places and nothing — and there’s no evidence of anything.”

After acknowledging the Astros do what everybody does in trying to read an opposing pitcher for pitch tipping, Hinch struck a self-righteous tone and implied that anything said anonymously is inherently untrustworthy. It was a more passive-aggressive usage of the odious term “fake news.”

“The problem I have is when other people take shots at us outside this competition,” Hinch said. “When you guys ask me this question, my face, my name is by my quotes, my opinions. My reaction is all for you guys to Tweet out and put on the broadcast. But we have people that are unnamed, or you guys have sources that are giving you information. I suggest they put their name by it if they’re so passionate about it to comment about my team or my players.”

In retrospect, there were a handful of signs (pardon the term) Hinch realized his bold words could come back to haunt him. His voice faltered ever-so-slightly and he cleared his throat a couple times. In real time, it wasn’t that noticeable, and maybe it meant nothing. Or maybe Hinch knew he was building lie upon lie.

Such hindsight observations also underscore that Hinch, for all the flawed eye-rolling comments he made Oct. 17, was still the most sympathetic figure to emerge from Monday. Of course, that wasn’t a hard “honor” to earn.

Luhnow was already despised throughout baseball long before Monday for building a cold, impersonal, win-at-all-costs organization that emboldened the likes of former assistant general manager Brandon Taubman to believe he could scream at a trio of female reporters following the ALCS-clinching win about how glad he was the Astros acquired Roberto Osuna even though he was serving a domestic violence suspension.

As Manfred wrote in perhaps the most damning sentence of his entire report: “But while no one can dispute that Luhnow’s baseball operations department is an industry leader in its analytics, it is very clear to me that the culture of the baseball operations department, manifesting itself in the way its employees are treated, its relations with other Clubs, and its relations with the media and external stakeholders, has been very problematic.”

Luhnow did nothing to improve his reputation Monday by releasing a statement in which he insisted he didn’t realize rules were being broken and blaming players, “lower level employees” and 2017 bench coach Alex Cora (the current, for now, Red Sox manager) for the debacle.

Crane hired everyone he fired for cheating, approved the acquisition of Osuna and runs an organization that initially decided smearing Sports Illustrated reporter Stephanie Apstein for accurately relaying Taubman’s post-ALCS comments was the correct course of action. (He eventually apologized) So he’s the embodiment of the idea that the best part about owning a team is the near-certainty you’ll never have to fire yourself.

Hinch, meanwhile, was the first and for way too long the only person of authority in the Astros’ organization to apologize for Taubman’s actions towards Apstein and two other reporters. He also told Manfred he knew of the Astros’ sign-stealing operation and even damaged a monitor twice. Later Monday, he issued a statement that struck an appropriately contrite and apologetic tone.

Of course, he didn’t do anything beyond damaging a monitor to stop the cheating, and that’s why he’s sitting out a year and why an otherwise rote press conference prior to a playoff game is going to haunt him for years whether he ever returns to a dugout or not.

“There’s nothing going on other than the competition on the field,” Hinch said as he closed out his opening remarks Oct. 17. “The fact that I had to field the question before a really, really cool game at Yankee Stadium is unfortunate. But we can put it to rest. That will be the last question I answer about pitch tipping or pitch stealing.”

Those were infamous last words 88 days later, on what might have been Hinch’s last day in a big league uniform.