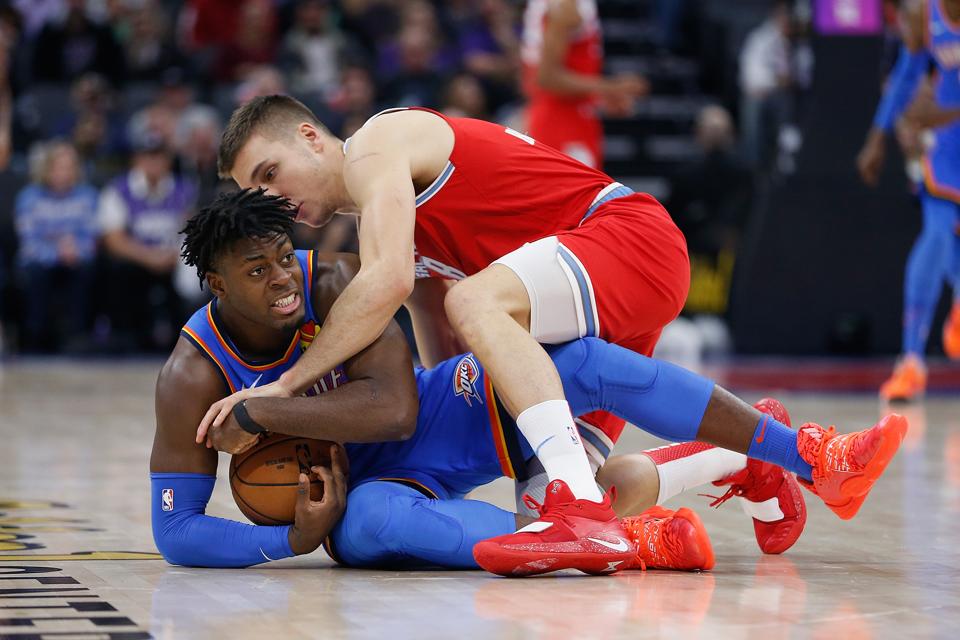 Growing up in Canada, Luguentz Dort did not start playing organized basketball until age 12. Just eight years later, as an undrafted rookie, he is making an incredible impact for the Oklahoma City Thunder as a starting wing at the NBA level as a two-way player.

Back in college, Dort broke the freshman debut points record at Arizona State with 28 points, 9 rebounds, and 3 steals in his first ever college game. Overall in his lone college season, he was one of the Pac 12’s best players, producing 16.1 points and 4.3 rebounds per game while earning All-Pac-12 Second Team, Pac-12 All-Defense Team, Pac-12 All-Freshman Team, and Pac-12 Freshman of the Year honors.

During his pre-draft process, after making that Pac-12 All-Defense team, Dort made it known that he was going to make an impact on the defensive end at the next level.

I spoke with Dort at Thunder Media Day before the season kicked off, and it seemed like he was ready to contribute at the NBA-level immediately. That has certainly been the case early in his career, on both ends of the ball.

As expected for someone who went undrafted, Dort started his career in the G-League playing for the Oklahoma City Blue. Through just 13 games, averaging 19.5 points, 4.8 rebounds, and 2.6 assists per game with the Blue, he had proven himself enough to start playing up with the Thunder.

Initially coming off of the bench, Dort was a high-energy guy who always brought a spark to the second unit with his elite athleticism and high motor. He was also tasked with guarding some of top scorers in the NBA, including Damian Lillard and Donovan Mitchell mid-way through the season.

Just one game after doing an exceptional job guarding Lillard, Dort got his chance to shine as a starter. After coming off the bench in his first eight NBA appearances, he would get the chance to start against the Houston Rockets in the absence of Terrance Ferguson due to personal reasons.

Even with Ferguson back in the lineup and available to start, Dort has retained the starting small forward job for the time being. In the ten games he has started, he has guarded the NBA’s premier guards from the tip, including James Harden, Trae Young, Luka Doncic, De’Aaron Fox, Devin Booker, and Jayson Tatum.

While his defensive rating doesn’t stand out as positive (112.0), just watching him guard some of these guys passes the eye test. Additionally, the fact that Billy Donovan and the rest of the coaching staff has tasked him with these defensive assignments from the beginning of his NBA career tells you exactly how great of a defender he is. He could really pan out to be a player with a role similar to Marcus Smart.

On the offensive end this season, Dort has also shown flashes of productivity. He’s averaged 5.8 points on 31.8 percent from deep in just 20.7 minutes per contest. What is most impressive is his comfort within his role. Dort lets the offense come to him and rarely shoots a bad shot. Open 3-pointers and hard attacks at the rim are his specialty on offense. He even had an outburst for a career-high 23 points in Sacramento against the Kings late in January.

Dort is extremely versatile on both ends of the floor. Not only can he guard essentially any position on defense, but he also can play a variety of spots on the offensive end. According to Basketball Reference, he’s played 76 percent of his time at small forward, 20 percent at shooting guard, three percent at power forward, and one percent at point guard.

Still on a two-way contract, Lu Dort is clearly due for a full-time NBA contract. Oklahoma City still has an open roster spot that he could fill by the end of the season. Due to limits on how many days two-way players can spend with an NBA team, he currently isn’t practicing with the Thunder. This goes to show how important it is that the Thunder get him inked to a multi-year NBA deal sooner than later.

What could his contract look like? Dort’s teammate Deonte Burton was in his shoes last season as a two-way player who earned a full-time NBA contract. Burton was promoted on March 10, 2019 to a two-year deal worth roughly $3.1 million. While that isn’t a huge number relative to other players around the league, this is significantly more than the $79,568 Dort is currently making as a two-way player.

The Thunder have gone 8-2 in the ten games Luguentz Dort has started this season. Part of that is good timing and a hot-streak for Oklahoma City, but there is no doubt Dort has been a big part of this winning streak overall. There isn’t many two-way players out there right now that you can plug into the starting lineup of a playoff team and have sustained success on both ends of the floor. He has truly been a diamond in the rough, leaving many wondering how nobody selected him in the 2019 NBA Draft.

Cishek Jumps From Wrigley Field To South Side,...

Inside A ‘Beauty Kitchen’