Oming In On Lululemon With Digital And Kids’ Offerings

Alo Yoga’s business has legs as it aims to double store locations this year.

How does one compete in a crowded market for designer yoga leggings? Try adding sheer fabric to reveal strips of toned flesh; offer ribbed or reflective details, or a bold red plaid.

Or open experiential retail locations, replete with kombucha on tap, yoga classes, and the promise of a like-minded community.

On the side, you can add subscription fitness videos, ala Peloton, and sprinkle in sightings of Kendall Jenner wearing your product. And don’t forget the children, the next generation of yogis.

Or you can do all of the above. Meet Alo Yoga. 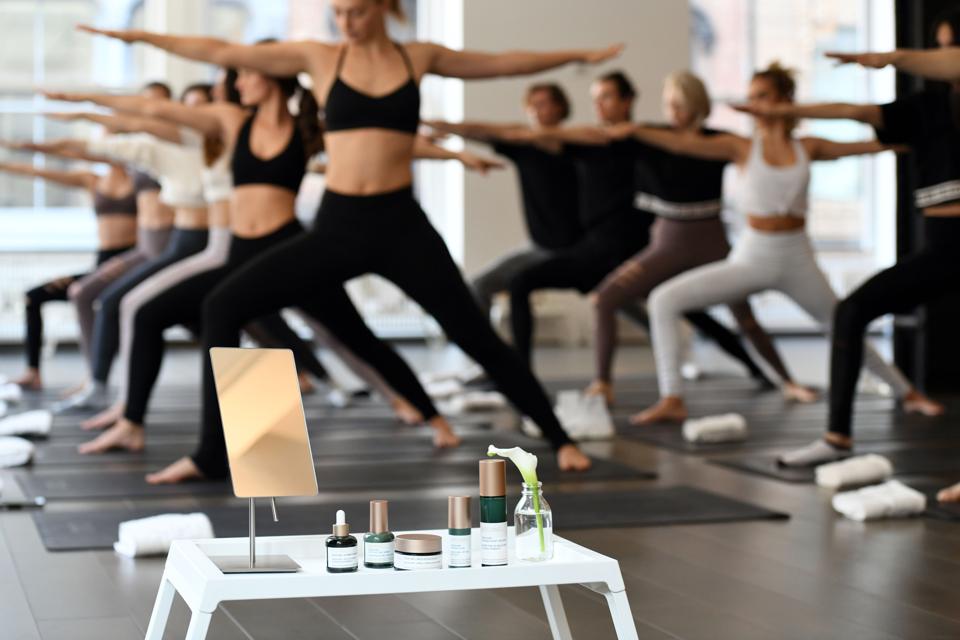 The Los Angeles-based premium yoga apparel company has been around since 2007 but is on a mission to double its brick-and-mortar presence this year, with new stores slated for its biggest markets: Los Angeles and New York.

As it looks to build its brand awareness, Alo Yoga has invested in content, acquiring the Seattle-based yoga app Cody in 2018, rebranding it Alo Moves, and flipping it into a subscription business. The unit provides online yoga, fitness and meditation videos.

“The future is in content,” says Harris, who does not rule out additional acquisitions.

Founded by co-CEOs Danny Harris and Marco DeGeorge, Alo Yoga remains entirely owned by the two executives, who have been friends since youth.

It currently has six physical stores, and by the end of 2020 should have up to seven in Southern California and four or five in New York. One store under construction on New York’s Fifth Avenue will span 20,000 square feet with a restaurant on the roof.

It is in good company, with reports noting how many digitally native brands are taking advantage of retail weakness and swooping in to open stores.

Harris says the Alo shopping experience is meant to be immersive, not unlike the way Restoration Hardware “inspires you to get into their designs,” then return home and purchase items online.

Other major makers of yoga apparel include Lululemon Athletica and Gap’s Athleta brand.

“All our competitors focus on fitness, and the products look like you just got back from hitting some tennis balls.” Alo products, Harris says, are designed to be worn from studio to street, and aim to be more fashion-forward.

Meanwhile, yoga apparel for children is expected to grow at a compound annual rate of 7.5% through 2025. Alo Yoga has taken note, having started a non-profit foundation called Alo Gives that aims to influence children to take up yoga. Its website features free, 5-minute videos to show kids the benefits of yoga and meditation.

“When we were children, Apple gave us Apple IIe’s to use.” Now it has the largest market cap in the world.” He continues: “We’re doing the exact same thing.”

“We inspire people to get into the practice,” says Harris, through social media, a free YouTube channel, Alo Moves, its retail stores and other digital outlets.

He admits the apparel isn’t cheap but says those who can’t afford to spend more than $100 on leggings can access its brand through other means. The leggings are “fuel for our megaphone,” he says.

While Alo Yoga does not disclose financials, Harris says revenue is in the vicinity of $200 million. Sales totaled approximately $40 million between Black Friday and Cyber Monday alone. It also enjoys high margins, helped by the fact that Alo Yoga is vertically integrated, with its own manufacturing facilities.

Alo Yoga is one of several companies under the umbrella of Color Image Apparel, which was started by Harris and DeGeorge in 1992. Its revenue is in excess of USD 800m. Other companies within the holding company include Bella + Canvas, which makes wholesale T-shirts; and maternity wear maker Ingrid + Isabel.

While Alo Yoga is not in need of external financing, it could consider taking on an investor or partner to aid expansion to Asia, or to lend experience in brick-and-mortar or other capabilities. The EU is also on its radar, he adds.

Harris says the company frequently turns away approaches from private equity investors as Alo Yoga is focused on a longer-term plan for its brand that could include a public listing in five to seven years.

Given the growing interest by Apple, Alphabet’s Google and others in health and wellness, tech giants are “exactly who we could partner with or take on as an investor,” he adds.

Heather West is Senior Editor for Mergermarket and Dealreporter in the Americas. She is based in San Francisco and can be reached at heather.west@acuris.com.

After ‘Warcraft 3: Reforged’ We Need To Define ‘Review-Bombing’

The Most Inspiring Immigration Stories Of 2019

How Narcissistic Leaders Can Destroy Organizations During Covid-19