Breaking
Florida Supreme Court Tells The American Bar Association...
How to Write Perfect Paid Social Media Marketing...
How To Boost Productivity In Your Small IT...
How Restaurants Can Design a More Sustainable Food...
Expenses That Small Business Owners Need to Be...
How You Can Make Saying Goodbye To The...
Biden To Meet Royal Family At Cornwall’s Eden...
It’s Going To Be Emotional — Going International...
Peer Mentoring For Students: STEM & Buds
7 PR Trends in 2021: The Story So...
Google Plans Radical New Google Pixel Smartphone Upgrade
Where Did COVID Come From?
Ride To Growth With A Business Vehicle
C3.ai’s Tom Siebel: How To Scale AI
Moz Acquired by iContact Marketing Corp
10 Examples of Brands Using TikTok Stitch and...
Home Finance On Juan Guaido’s Venezuela Status, Bernie Sanders Stands Alone
Finance 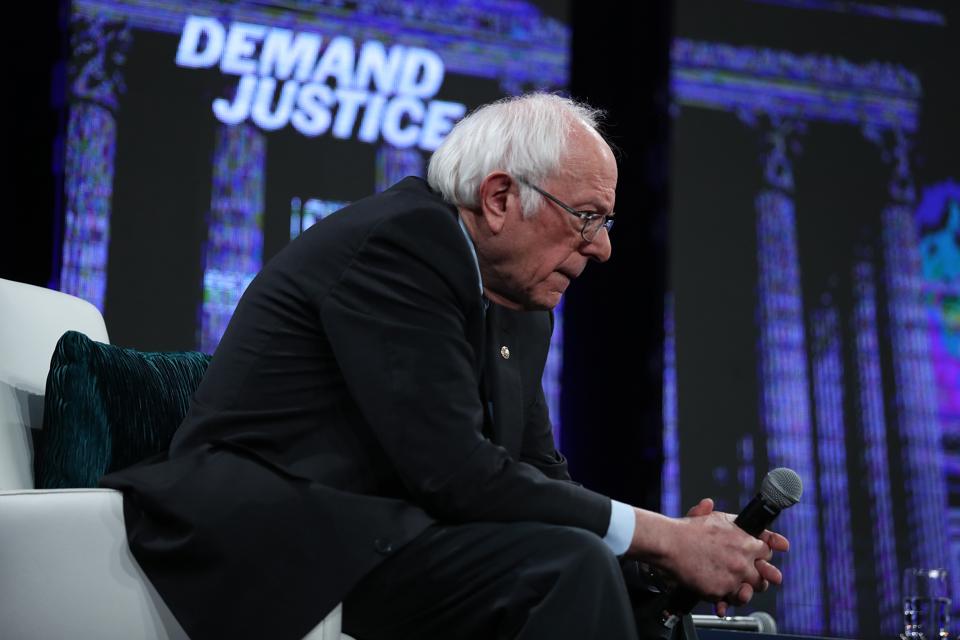 If the Democratic Party is so left wing, then why isn’t a single of the top candidates against Washington’s recognition of Juan Guaido as the country’s president? Oh wait, there is one who does not recognize Guiado. It’s Bernie Sanders.

Sanders is not an Independent for nothing.

Last week, Guaido, who was once the official head of the National Assembly of Venezuela until Socialists United politics orchestrated a vote to get him out, was singled out by President Trump at his State of the Union address. Guaido was the only foreigner highlighted by the president. It wasn’t that Trump and Guaido are best friends. It was Trump using Guaido as an example that there will never be socialism in the United States.

Last week, the American Society/Council of the Americas (ASCOA) listed the Venezuela position of all the Democratic Party presidential hopefuls. Sanders stood out.

In a televised interview with Mexican-American journalist Jorge Ramos on Univision broadcast on February 22, 2019, Sanders said he did not consider Guaido to be the legitimate president of Venezuela.

Guaido was named “interim president” by Washington last year when Nicolas Maduro was elected in a vote that the Organization of the American States and a Catholic Bishop’s council in Venezuela said was illegitimate. Other countries quickly followed in no longer recognizing Maduro as Venezuela’s president, including Colombia and Brazil.

It is unclear if Sanders maintains his position on Guaido. 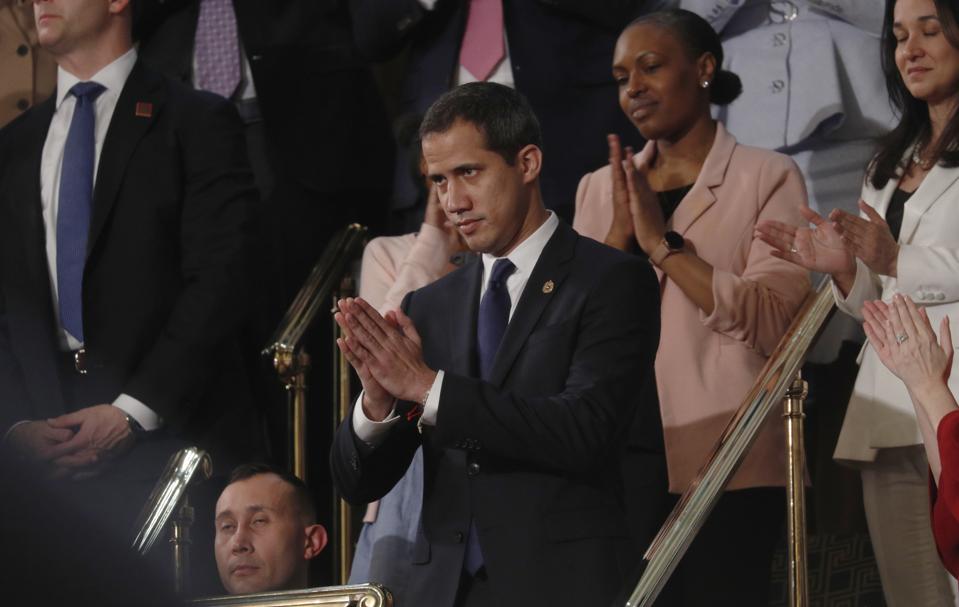 Venezuelan opposition leader Juan Guaido waves as President Donald Trump recognizes him during the … [+] State of the Union address. Guaido is the “anti-Bernie.” (Photo by Leah Millis-Pool/Getty Images)

The rest of the top tier candidates, including Joe Biden, Elizabeth Warren, Pete Buttigieg and billionaire Michael Bloomberg all have said they recognize Guiado and not Socialists United leader Maduro.

Sanders also does not support economic sanctions on Venezuela. For example, the beleaguered national oil firm PdVSA is banned from repatriating money from the U.S. back to Venezuela. And crude oil from Venezuela is also no longer allowed in the U.S.

Sanders, like most left-of-center Democrats today, is against regime change — both covert and overt military and intelligence operations designed to overthrow a government. While Trump is also against regime change, having dialed back the Obama Administration’s actions in Syria, for example, he has put President Reagan and Bush-era hawks in charge of Venezuela, leading many to believe it is only a matter of time before Americans try overthrowing the Socialists United.

The party, created by the late Hugo Chavez, has governed for over 20 years. Its heyday was back in the commodity super cycle, when Venezuela was able to rely on oil to make Chavez’s redistributionist policies a reality. To this day, the party has many people loyal to Chavez, known as Chavistas, who remember what he did during the days when oil was priced at $100 a barrel.

Those days are long gone. Venezuela’s economy is in a recession. The middle class and the rich survive on dollars, an irony that is obvious lost on the “anti-imperialist” Maduro and his peers.

Sanders has called for negotiations with the Maduro government and free and fair elections. But Maduro has proven that he is not interested in what Sanders thinks. The latest parliamentary vote for what equates to the American version of House Speaker was another electoral fiasco.

Venezuelan elections are a lot like the 2016 Democratic National Committee superdelegates and the Iowa Caucus tripping up Bernie Sanders, only with more protests following the results.

With one eye on regime change, Sanders has followed in the footsteps of other Democrats and is a cosponsor of a Senate resolution that would “prohibit the funding of any military operations in Venezuela without congressional approval.”

He also co-signed the June 2019 letter asking Trump to give Venezuelans official Temporary Protected Status. That program provides relief from deportation and access to a work permit for undocumented foreign nationals from countries facing natural disasters, armed conflicts, and political upheaval. In 2018, over 30,000 people from Venezuela applied for asylum status in the United States. An estimated 1.3 million are in Colombia. 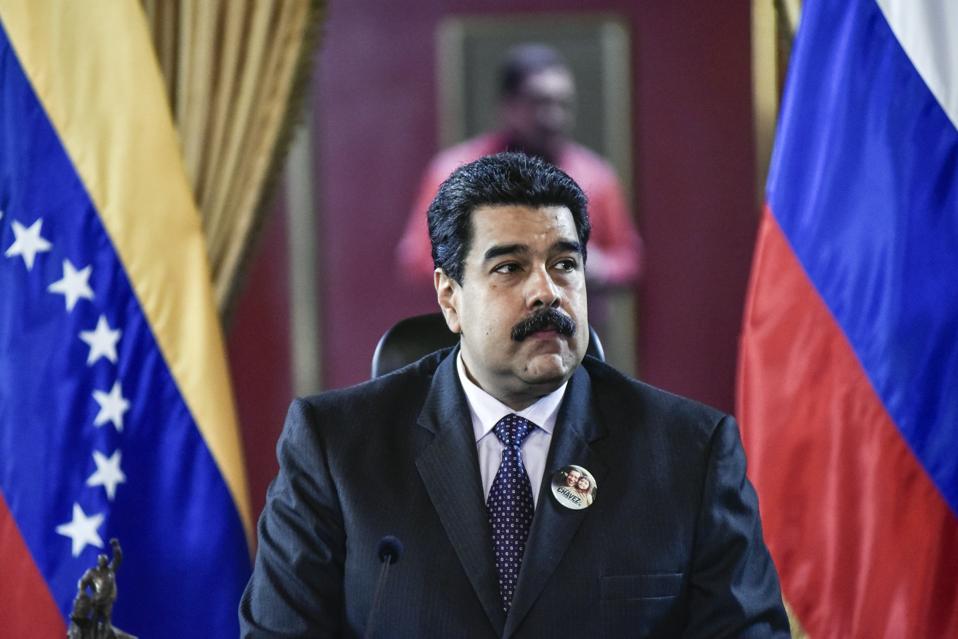 Nicolas Maduro, president of Venezuela. He hates Yankee imperialists. Wants to decolonize Latin … [+] America. Yet, he survives on dollars. As do the wealthy and middle class of Caracas. Photographer: Carlos Becerra/Bloomberg

Trump has not given Venezuelans that Status because the bill to do so — H.R. 549 — is still in the Senate Judiciary Committee. Venezuelans in the country now are supposedly being given work permits, but only on a case-by-cases basis.

Venezuela’s crisis is an eyesore for Sanders because it forces him to explain how his brand of “democratic socialism” is not like that of Venezuela. For his part, Sanders also thinks Venezuela is “a disaster” and called Maduro “a vicious tyrant.”

Sanders says that his form of socialism is just a larger safety net for the public. He compares it to that of the Nordic countries where health care, senior care, and public primary and secondary education is covered by taxpayers.

Last year, then-Prime Minister of Denmark, Lars Lokke Rasmussen, said he did not consider Denmark a socialist country, adding that it was a free market, and people were free to live as they pleased.

He then went on to say how the generous welfare state is financed:

“The top income tax in Denmark is almost 60%. We have a 25% sales tax and on cars, the excise duties are up to 180%. So in total, Danish taxes come to almost half of our national income compared to about 25% in the U.S., quite a substantial difference,” he said.

“In a society with high taxes, we have to be very conscious about the incentive to work. We are challenged now by foreign labor willing to work for low salaries and we need reforms in order to fix the welfare state and Danish public’s support for it,” he says, suggesting the system is showing signs of wear.

At least in Denmark those tax dollars have been redistributed for people to maintain a high quality middle class lifestyle. In Venezuela, the middle class (and the rich) survive on dollars. The poor survive on left wing political slogans concocted from Maduro, and whatever handouts he can afford to keep the rabble in line. Those that want more than a few pounds of rice and subsidized shanty town housing have escaped to other countries.

For Americans that, by and large, do not view socialism as Denmark, but see it more as Cuba and Venezuela today, Guaido is a man who stands against everything Sanders stands for.

Guaido might be rolled out again this year if Bernie Sanders is eventually picked, likely begrudgingly, by the Democrats to lead them against Trump in November. Guaido surely will not consider Sanders an ally in his political fight with Maduro.