On The One-Year Anniversary Of The Kristaps Porzingis Trade, Can Either Team Be Declared A Winner? 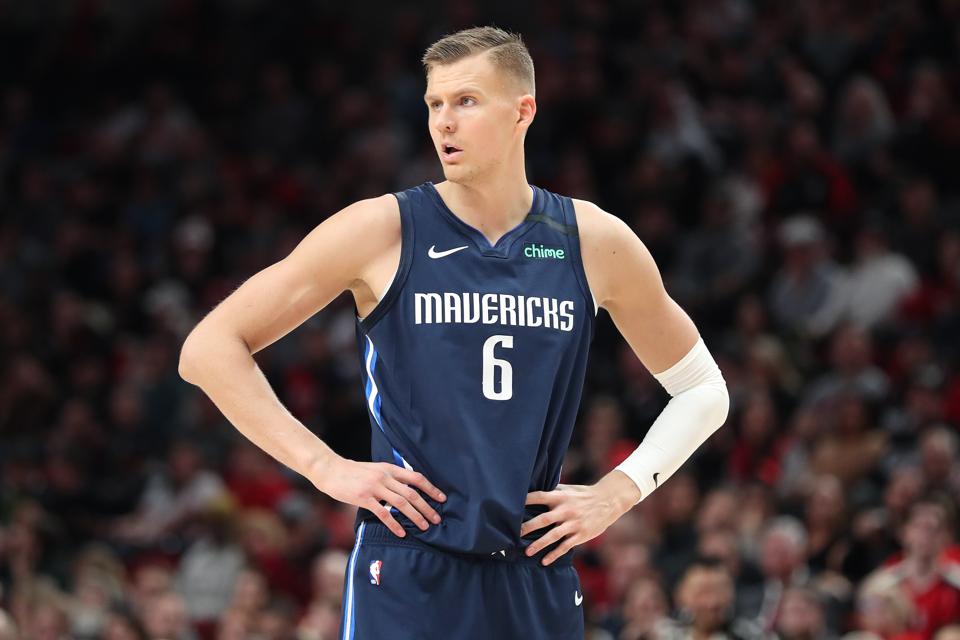 PORTLAND, OREGON – JANUARY 23: Kristaps Porzingis #6 of the Dallas Mavericks reacts in the fourth … [+] quarter against the Portland Trail Blazers during their game at Moda Center on January 23, 2020 in Portland, Oregon. NOTE TO USER: User expressly acknowledges and agrees that, by downloading and or using this photograph, User is consenting to the terms and conditions of the Getty Images License Agreement (Photo by Abbie Parr/Getty Images)

In what has been a tumultuous twelve months since for the Knicks, it’s worth re-examining how the blockbuster deal looks in hindsight.

The only player the Knicks acquired that is still on the roster is Dennis Smith Jr, who has had a disastrous 2019-20 campaign. At the time of the trade, the hope was Smith could develop into a quality starting point guard in New York. However, he’s has looked lost for most the season, and has also been unable to stay healthy, having recently missed 13 games due to a strained left oblique. When he has been able to play, the results have been alarming.

Over 24 appearances (one start), Smith is averaging 5.2 points and 2.1 assists in 15.5 minutes. After shooting 40.7% over the first three years of his career, the Knicks were anticipating he’d make notable progress in 2019-20. Instead, he’s taken a massive step backward. Smith has converted just 47 of his 140 FG attempts (33.6%) this season and has made only 50% of his free throws (17-of-34). Remarkably, he has more turnovers than steals, blocks and made free-throws combined. Per Basketball-Reference, Smith is on pace to join Ben Wallace as just the second player in the last 15 years to log more than 15 minutes per game, yet post an Effective FG percentage south of 40%.

It has to crush Knicks president Steve Mills and GM Scott Perry that a player they bet on has played so poorly.

In addition to getting Smith and two draft picks, the other huge motivating factor for New York was unloading the onerous contracts belonging to Tim Hardaway Jr and Courtney Lee. The Knicks planned to use that cap space to make a significant splash in July of 2019 by signing a pair of max-level free agents. As we know, the Knicks whiffed on Kevin Durant, Kyrie Irving, Kawhi Leonard, etc. Thus, paying a premium to dump Hardaway’s deal is regrettable in retrospect. 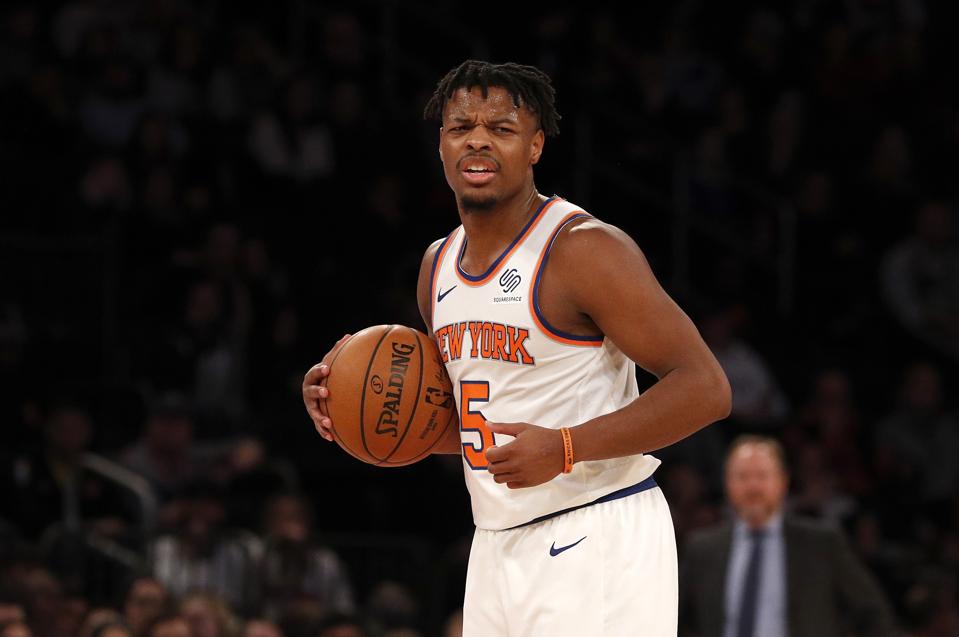 NEW YORK, NEW YORK – DECEMBER 21: (NEW YORK DALIES OUT) Dennis Smith Jr. #5 of the New York Knicks … [+] in action against the Milwaukee Bucks at Madison Square Garden on December 21, 2019 in New York City. The Bucks defeated the Knicks 123-102. NOTE TO USER: User expressly acknowledges and agrees that, by downloading and or using this photograph, user is consenting to the terms and conditions of the Getty Images License Agreement. (Photo by Jim McIsaac/Getty Images)

However, in order to declare the Knicks the clearcut “losers” in the trade, that would make the Mavs “winners,” right? Well, that’s where things get tricky.

First and foremost, it’s imperative to point out that Porzingis is still working his way back from ACL surgery. When he took the floor on opening night, it had been 624 days since he last played in an NBA game. Yet, he played well early on, scoring 20+ points in each of his first three contests for the Mavericks. However, as the season dragged on, KP’s impact decreased, and his efficiency began heading in the wrong direction. This was the continuation of a troubling trend from his days in New York. In his finals two seasons a Knick, Porzingis often started out the season playing like an MVP candidate, only have his production tail off before eventually succumbing to an injury.

Sure enough, Porzingis was a late scratch the Mavs’ contest on New Year’s eve due to what was termed “minor right knee soreness.” Yet, he ended up miss ten consecutive contests due to the knee issue. Since returning to action, he’s seen his minutes reduced and has not been nearly as effective.

On the season, he is shooting a career-worst 39.7% from the floor and 73.9% from the charity stripe, while also posting career-lows in PER (16.2), VORP (0.1) and BPM (-1.5). He is on pace to become the second NBA player in the last five years to average at least 15 FG attempts per game and shot below 40% from the field (the other member of his club is Tim Hardaway Jr.)

Remember, it wasn’t just the ACL that sidelined Porzingis during his Knicks tenure. Even before the ACL injury, he had shown plenty of signs of fragility. Over only his first two seasons in the league, Kristaps missed games due to injuries to his left Achilles, right shoulder, left groin, left leg, right ankle, and right foot.

Does Porzingis have “superstar upside?” Absolutely. He’s shown intermittent flashes of sheer brilliance. With sophomore sensation Luka Doncic emerging as one of the league’s top-ten players this season, Dallas doesn’t need Porzingis to carry the club; they simply want him to serve as a second banana, or a Robin to Luka’s Batman. Yet, it remains to be seen if Porzingis can fulfill his potential and carry that responsibility longterm, especially down the stretch of a season and into the playoffs.

Keep in mind, Porzingis was drafted in July of 2015. It’s now 2020, and he has played a grand total of one NBA game in April in his entire career. One.

While Dennis Smith Jr. has just $5.6 million remaining on the life of his contract, the Mavs inked Porzingis to a fully-guaranteed five-year, $158 million max extension last summer. Here’s the breakdown of his annual salary moving forward:

When Doncic eventually signs his max pact, cap space will obviously be at a premium in Dallas. With Porzingis accounting for nearly 30% of the cap, the Mavs will need him to play, and play well, if they hope to emerge as a legitimate championship contender over the next few years.

As with most trades, we’ll likely have to wait a while before ultimately passing judgment on this blockbuster deal. Does Porzingis develop into the stud Dallas was hoping they’d acquire? Who do the Knicks select with the two first-rounders they own in 2021 and 2023? Stay tuned. 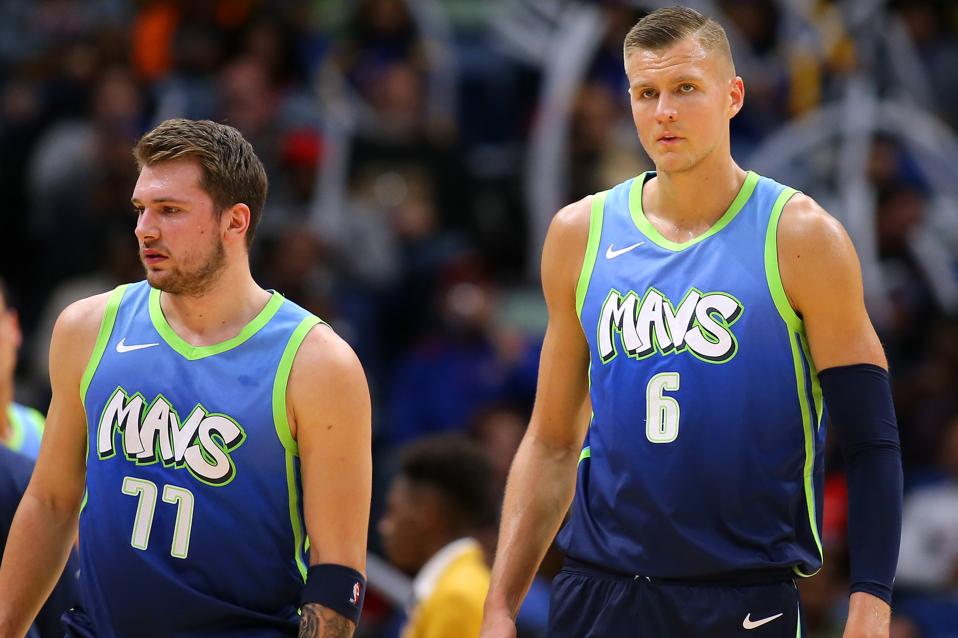 NEW ORLEANS, LOUISIANA – DECEMBER 03: Luka Doncic #77 of the Dallas Mavericks and Kristaps Porzingis … [+] #6 react against the New Orleans Pelicans during the first half at the Smoothie King Center on December 03, 2019 in New Orleans, Louisiana. NOTE TO USER: User expressly acknowledges and agrees that, by downloading and or using this Photograph, user is consenting to the terms and conditions of the Getty Images License Agreement. (Photo by Jonathan Bachman/Getty Images)

‘Warcraft 3: Reforged’ Has A Record Low 0.8 Score On Metacritic As Fans Are Furious

This Amazon Ninja Backpacked Through 80 Countries, Creating Multi-Million Dollar Startups Along The Way