Breaking
Looking To Improve Efficiency In Your Business? Here’s...
AI and machine learning for business
How Social Media Changed the World
Shopify: The Pros and Cons
Should your business go green?
Expanding Your Business Into Spain: What You Need...
Essentials For Your Office Coming Out Of COVID-19
What Can Marketers Learn From Digital Cults?
Why NASA’s James Webb Space Telescope Will Never...
Increasing HR Effectivity and Efficiency through Software Solutions
The Difference Between Building A Startup In Bull...
Fluor Corp Ranked Among Today’s Top Shorts
Common Pitfalls to Look Out for When Buying...
Will the Olympics go ahead this year?
Pack Up the Big Top: Insights from MozCon...
Best WordPress Themes for Blogs
Home Finance On The Rebound: Industries To Watch (and Avoid) As Markets Move Higher
Finance

On The Rebound: Industries To Watch (and Avoid) As Markets Move Higher 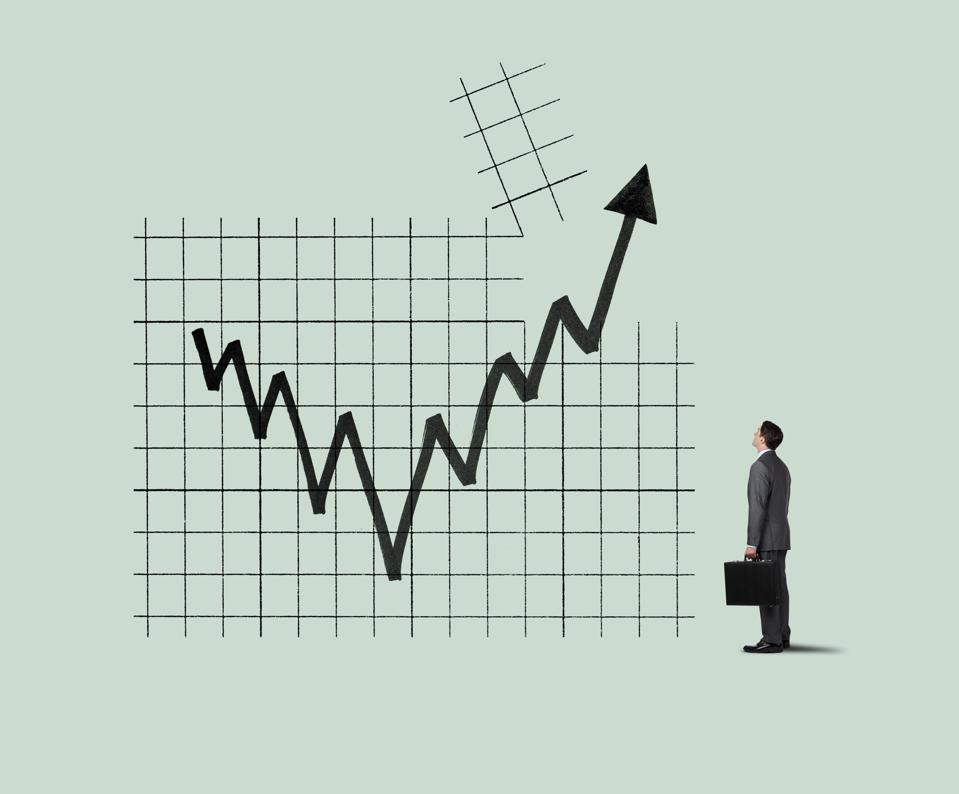 The U.S. equity market has had a staggering move from its March 23 low of 2,191 up more than +30% to current levels. The bounce has been led by three different kinds of stocks: secular leaders likely to perform relatively well regardless of the overall economic environment, companies whose business has benefited from the Covid-19 pandemic, and beaten-down stocks that have rebounded sharply from March’s extreme lows.

As this recovery progresses, investors should emphasize long-term growth sectors and stocks and avoid areas of the market that are likely to lag. In particular, certain areas of Technology such as Cloud and Cybersecurity are likely to prosper as use of cloud computing and online businesses explodes. I like Docusign (DOCU), which provides e-signature solutions; ServiceNow NOW (NOW), which helps companies shift their workflow automation to the cloud; and Adobe ADBE (ADBE), which is helping companies transition their publishing into the online world. 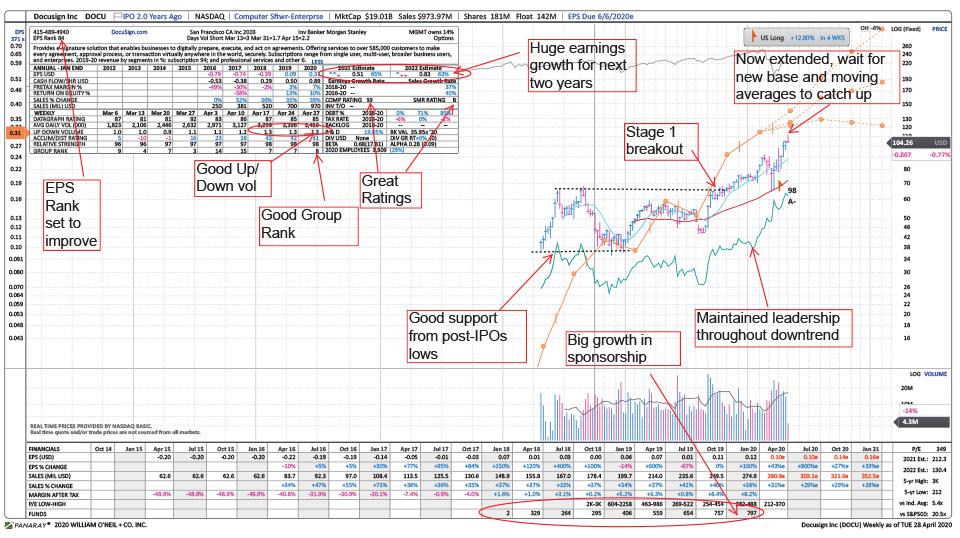 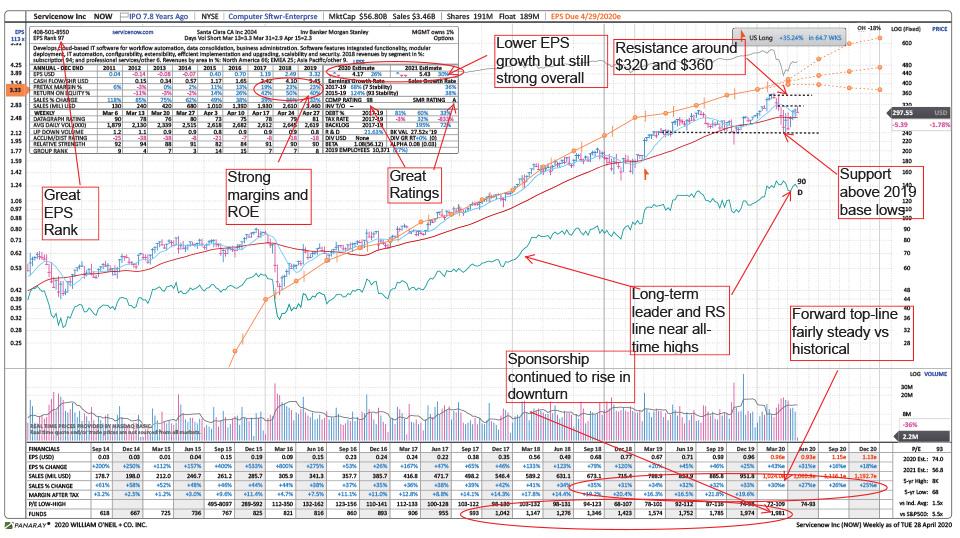 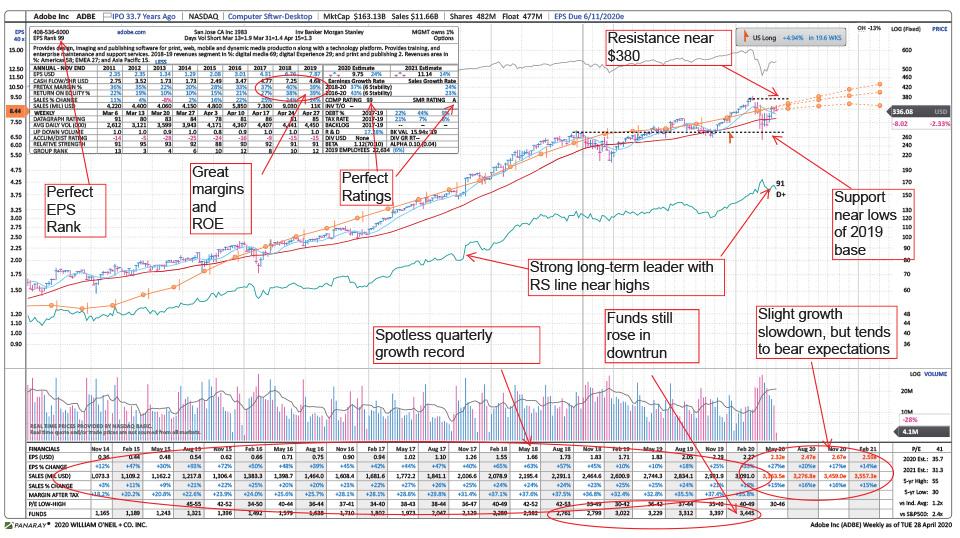 The global lockdown due to Covid-19 has further increased the popularity of a rapidly expanding video game industry. In countries with strict lockdowns, mobile gaming downloads have soared since mid-March, especially in top markets the U.S. (+50%), France (+55%), and Italy (+60%). For this reason, I favor Tencent (TCEHY), a mobile game leader in China’s substantial marketplace.

The pandemic is also boosting usage of electronic payments as people order goods and services from home and avoid physical currency. I continue to favor PayPal PYPL (PYPL), the global leader in the cash-to-digital trend with almost $200B in total payment volume. Through its Venmo app, it is also the leader in person-to-person payments with more than 40M users. Other areas that I believe will maintain long-term growth include market research, drugs and med-tech, alternative energy, and data center/cell towers. 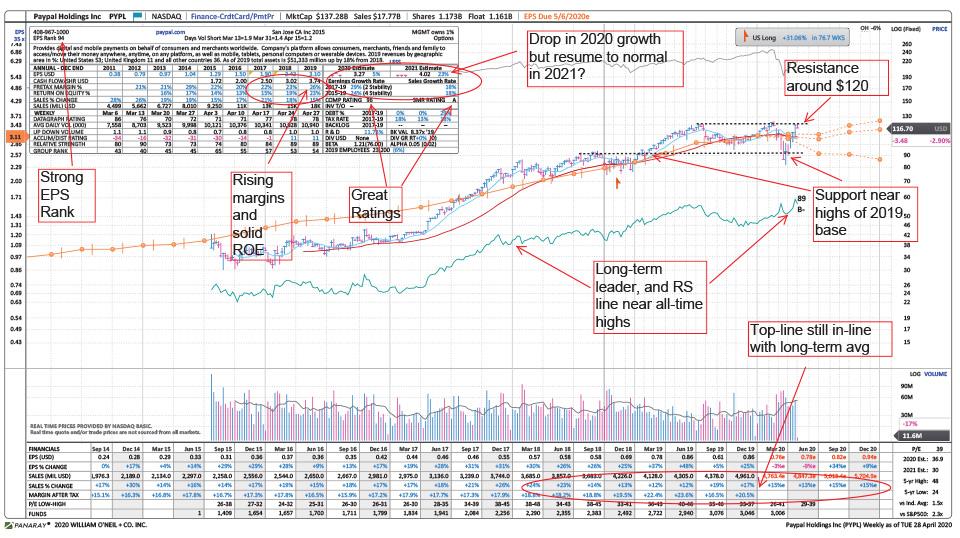 Although many stocks will rally along with the market in an uptrend, there are certain groups I suggest avoiding. A group that is likely to face extended headwinds from the pandemic crisis is U.S. banks. The rapid decline in interest rates has caused net interest margins, the spread between loan yield and deposit yield, to collapse. In addition, loan growth is currently weaker than at any time since the financial crisis of 2008–2009, with commercial and industrial loan growth turning negative in Q4 2019. As a result, profitability has fallen sharply. The next shoe to drop may be a sharp decline in credit quality due to the economic strain on small businesses and consumers. A common measure of bank stocks’ valuation is price-to-book value. Currently, most U.S. regional banks are trading near 1x their book value. In the 2008–2009 financial crisis, many banks traded at roughly 0.75x, implying significant downside from here. Given the damage done to the U.S. economy, it is unlikely there will be a significant increase in net interest margin or commercial loan demand in the near future.

Another area to avoid in your portfolio is brick-and-mortar retail. The nationwide lockdown has led to temporary store closures across the sector, compounded by a spike in U.S. unemployment and decreased appetites for discretionary spending. Brick-and-mortar models are risky because they carry high levels of fixed costs, namely rent and labor. A small change in revenue can lead to a disproportionate change in profit, which has pushed some retailers like Neiman Marcus to the brink of bankruptcy. Auto dealers may also be at risk, particularly ones with high levels of debt such as Penske Automotive Group (PAG PAG ), which has an eye-watering net debt to EBITDA ratio of ~8x and a wafer-thin EBITDA margin of 3%. Until unemployment falls and consumer finances improve, avoid these stocks. 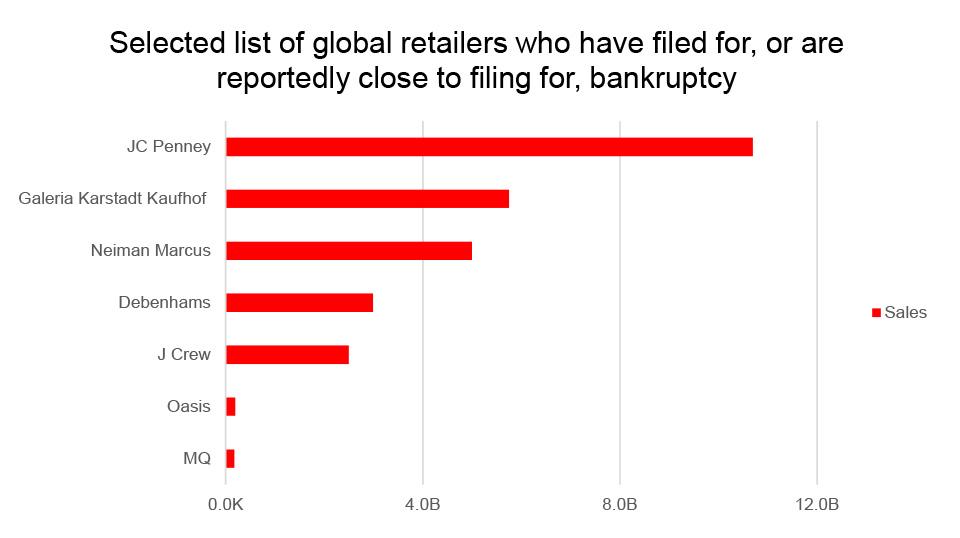 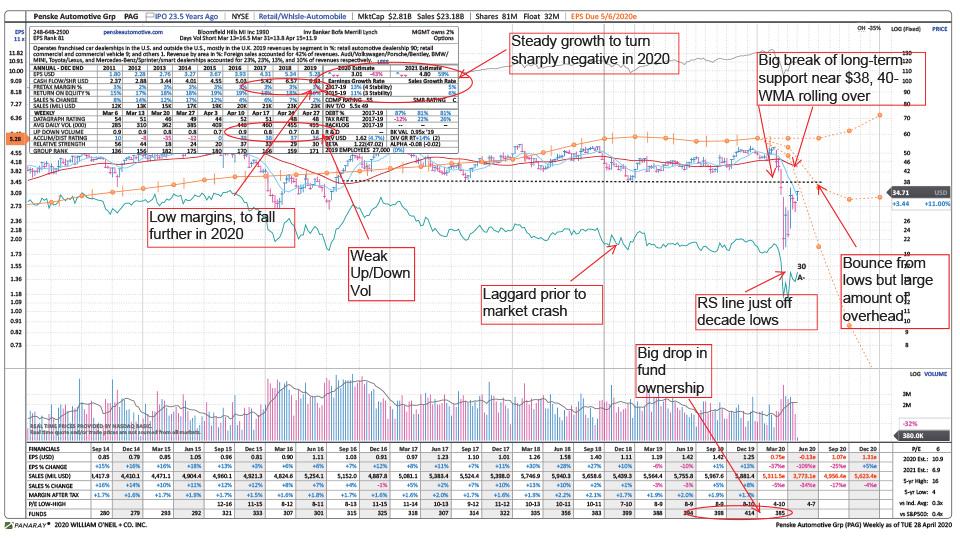 It’s important to remember that while the U.S. stock market has rebounded, the U.S. economy has not as of yet. Remain selective when picking stocks and focus on companies with strong and growing businesses and avoid those that might have an extended period of weak earnings.

No part of my compensation was, is, or will be directly or indirectly related to the specific recommendations or views expressed herein. O’Neil Global Advisors, its affiliates, and/or their respective officers, directors, or employees may have interests, or long or short positions, and may at any time make purchases or sales as a principal or agent of the securities referred to herein.

Alphabet’s Post Earnings Rally May Only Be The Start