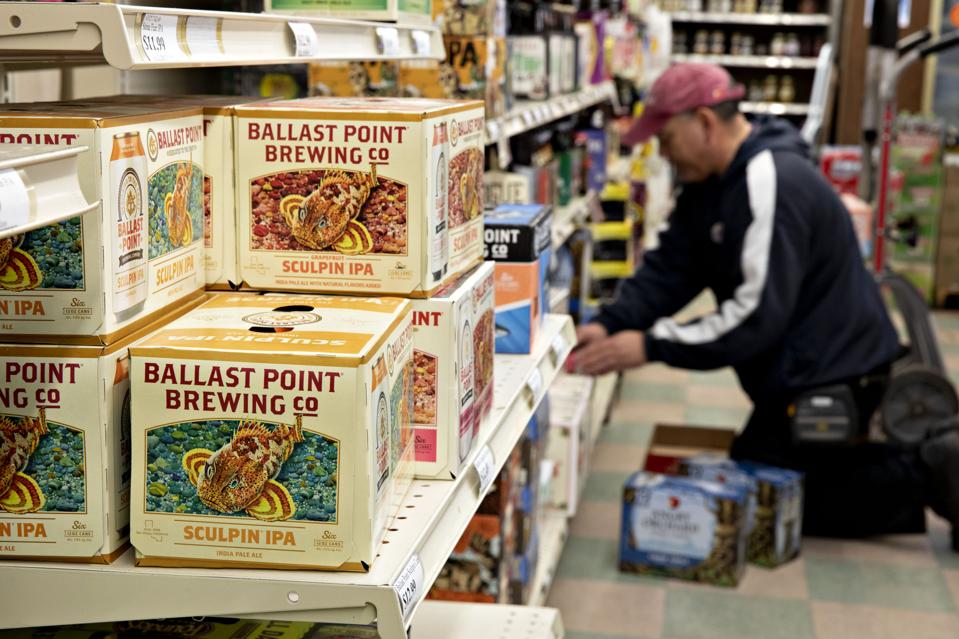 A leading financial markets research firm is calling Constellation Brands “The Best Story in Beer” just one month after the beverage and cannabis conglomerate shocked the beer world by revealing it would unload the beleaguered Ballast Point brand for a small fraction of what it paid for it five years ago. With Cowen equity research agency additionally naming Constellation (stock ticker: STZ) its Top Pick in the category the day it reported better-than-expected earnings for the third quarter of fiscal 2020, analysts wrote on Wednesday, “STZ’s beer portfolio continues to meaningfully outpace the industry, driven by its premium pricing.”

Indeed, Constellation’s most recent earnings report shows the it beat both revenue and earnings per share (EPS) expectations in the third quarter of fiscal 2020. The recent sale announcement doesn’t factor into the New York company’s earnings, of course, but it does show up in its prognostications and means that the investing public is waiting with anticipation for the record to reflect corrections to the 2015 purchase as well as other arguable missteps.

Despite a balance sheet weighed down by the underperforming, overvalued Ballast; the successively larger investments in Canada’s bleeding Canopy Growth (WEED) cannabis firm, and a few flagging budget wine labels it’s selling to E. & J. Gallo Winery, Constellation outperformed the market’s predictions by $50 million in revenue and $.30 in EPS. Revenue rose 1.5% year-over-year to $2 billion and EPS increased to $2.14. Its stock closed up 3.6% on the news.

Thanks in part to the beer and wine divestitures, Constellation also raised its prognosis for the coming year.

According to its earnings report, the company increases its fiscal 2020 operating cash flow target to around $2.3 billion and free cash flow projection to $1.5 – $1.6 billion.”

Writes President and CEO Bill Newlands in the report, “It’s shaping up to be a dynamic year at Constellation. We delivered strong performance in Q3 powered largely by our beer business.”

Despite the poor performance of Ballast, Constellation’s beer division remains strong, thanks largely to its imports. As American owners of such powerful Mexican brands as Corona and Modelo, executives applaud a remarkable depletion growth rate of 7.9% in an industry whose US sales and production is dropping by the month.

Constellation’s accountants write that the increase is “driven by Modelo Especial, which grew depletions nearly 15% and solidified its position as the #4 beer brand (in sales) in the entire U.S.”

That said, the numbers coming out of the wine and spirits division do not call for celebration. Though Svedka vodka is performing well, as are select wine labels, some government-recommended downsizing of the sales agreement with Gallo forced accountants to revise their figures and their assumptions downward. Operating margins for the division decreased, with the expectation that fiscal 2020 net sales and operating income will decline between 8% and 10%.

Cowen welcomes the divestiture of the underperforming wine brands, writing of the overall wine portfolio, “Reported sales declined 9.7%, as shipments fell 13.5%, and depletions were down 5.8%, as these weak results continue to reflect the overhang of de-prioritized brands that will ultimately move to Gallo.”

The sale is expected to close during the first half of fiscal 2021, with the Ballast Point deal closing at the end of fiscal 2020.

As for Canopy, the company recognizes a $534 million decrease in the fair value of its investments last quarter, at the same time that Constellation’s former CEO took over its top leadership role.

Cowen considers the “failure for WEED to stem its operating losses” a potential liability to its Outperform assessment.