Breaking
What You And Your RTO Business Need To...
4 SEO Trends for Websites You Should Not...
3 Reasons Why Desk Booking Is Rising In...
8 Tips to Play & Win at Online...
How can software benefit facility management?
Do Professional Casino Players Pay Taxes for the...
Becoming a Trading Expert: What Is the Best...
Dos and Don’ts for B2B Organisations in 2022
Should your business be using Machine Vision?
Colour Masterbatch vs Raw Pigments – Which Is...
Keeping your business moving as you expand online
Top Four Celebrities Who’ve Invested In Cryptocurrency
Why is Cloud Computing Tipped to be the...
How to Raise Money for Non-profit Organizations in...
Choosing the right theme for your WordPress Business...
A Guide to Using Celebrities to Promote Your...
Home Finance One COVID-19 Chart To Explain The V-Shaped Market & Economic Recovery
Finance

I have been advocating that people should expect a strong reopening based on the data. I have been extremely focused on demographics and that it is increasingly clear that we can identify people more or less at risk. That identification can allow us to be safer and stronger than the the current brute force approach has allowed.

This article 42% of COVID Deaths are from 0.6% of the Population is extremely well done and is in line with rough estimates I have cobbled together. It might be helpful to think about this graphically.

U.S. Population, under age 65, over age 65, and those residing in LTC facilities. 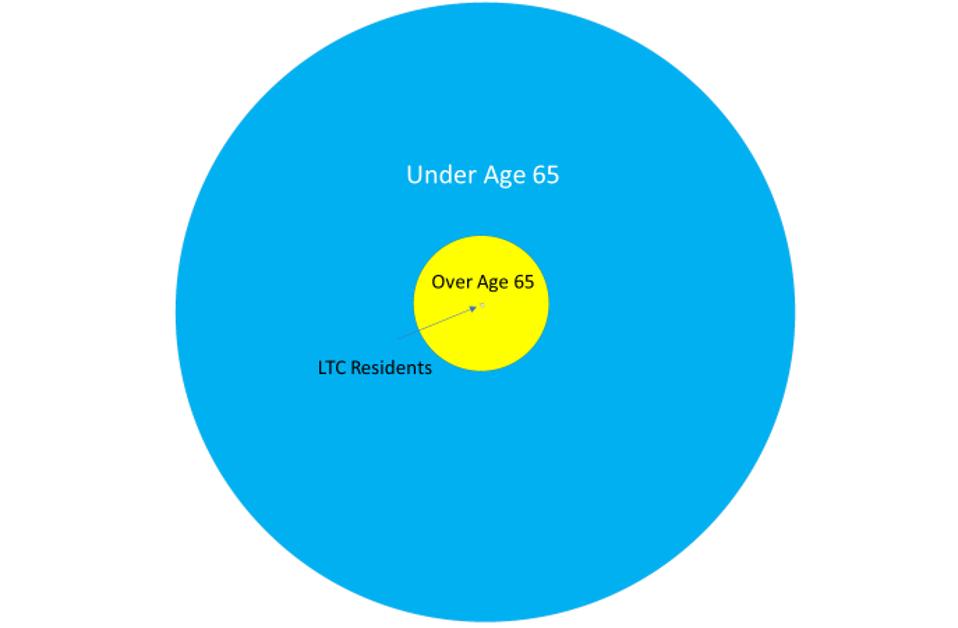 That tiny little dot in the center represents the approximate number of people living in LTC facilities in America (I’ve seen estimates ranged from 1.7 million to 2.5 million).

That dot, which is barely a spec on this chart, accounts for approximately half of all COVID-19 linked deaths! The population of the age of 65 has suffered a similar number of deaths, but that is from a much larger population base.

The deaths, of 40,000 to 50,000 in each of those two categories is too small to register on this chart. It is tragic that the LTC facilities have suffered so much. Whether it is because many were already very sick or because facilities of all types seemed to expose residents to high viral loads, or some other reason that we need to determine, this already partitioned group, bore the brunt of COVID’s initial wave.

I find it encouraging that the large population of elderly has fared well, certainly relative to those in LTC facilities. COVID is definitely worse than the flu, which the CDC blames for 12,000 to 61,000 deaths annually, but might not be orders of magnitude worse than many (including myself) feared.

Finally, that giant blue circle, representing people under the age of 65, the bulk of the workforce and all the children in the country, has had about 10,000 deaths.

The circle, that dwarfs the others in size, has had very few deaths.

I have not tried to attribute “comorbidity” but some states are reporting that serious comorbidity was a factor in over 95% of cases.

The various forms of shutdown and social distancing have helped. Almost certainly, we would have had more cases and more deaths had we not attempted to slow the spread of the virus. Hospital utilization may have surged beyond capacity. We also seem to be learning a lot more about how to treat patients since February when the first domestic cases started appearing. We have been able to get PPE into the medical community who were initially forced to combat the virus with woefully inadequate supplies.

While the shutdown helped, it also seems clear that demographics play a key role and if we follow the data, we should be able to chart a path to a safe, not riskless, but safe reopening that can be robust and protect those most in need of being protected.

I support ongoing social distancing efforts and have my mask and where it around places and people who have not given me permission to be without a mask, but I do think we need to focus on reopening the economy and the data can help us a lot.

For too long, we only got headlines and not the details. The details will allow us to take more specific actions that can more effectively protect those that need it, while allowing a normalization for others. It is not without risk, but it is time to move beyond headlines that lead to bad decisions (or, even worse, headlines that are designed to protect some already poorly made decisions).

Reopening is about the data and the health of the economy. This may be why stocks have already responded so well, because those with obligations to make good decisions have already digested the data and are acting accordingly and it should lead to a strong and possibly even V shaped recovery.

WILL NEW YORKERS ABANDON THEIR CITY TO WORK AT HOME IN THE SUBURBS ?

Why Have The Number Of Strokes Fallen During The COVID-19 Pandemic?