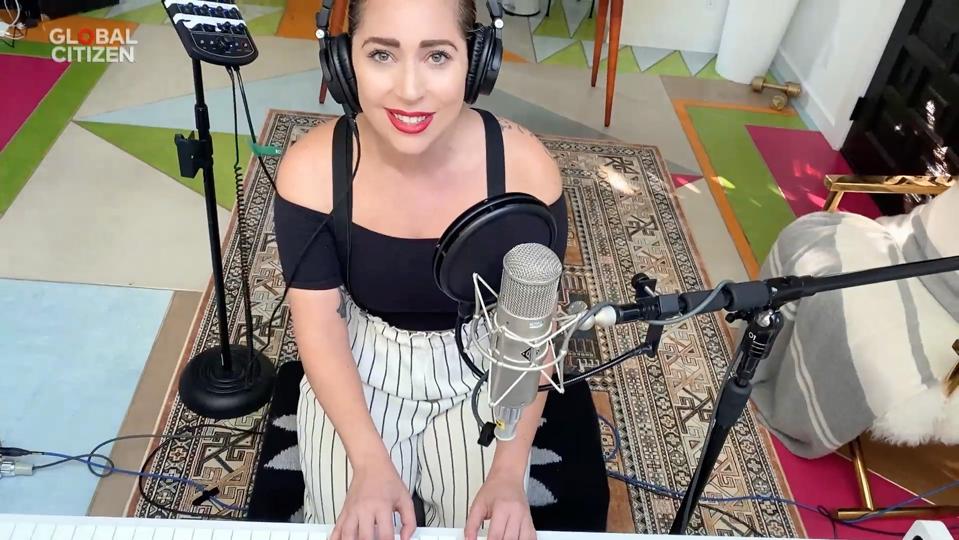 Lady Gaga performs during “One World: Together At Home” global broadcast and digital special held … [+] today to support frontline healthcare workers and the COVID-19 Solidarity Response Fund for the World Health Organization. (Photo by Getty Images/Getty Images for Global Citizen )

This concert didn’t have the onstage dancers, the multi-barrel confetti cannons, or the fancy sets, unless, of course, you count the beer, candle, and enormous book next to the Rolling Stones’ Keith Richards. But that didn’t keep the “One World: Together At Home” concert that was broadcast and live-streamed on Saturday from being memorable. What made this concert striking wasn’t just the star-studded line-up. It was also the stated purpose: to honor front-line healthcare workers and support the World Health Organization (WHO) during this COVID-19 coronavirus pandemic. 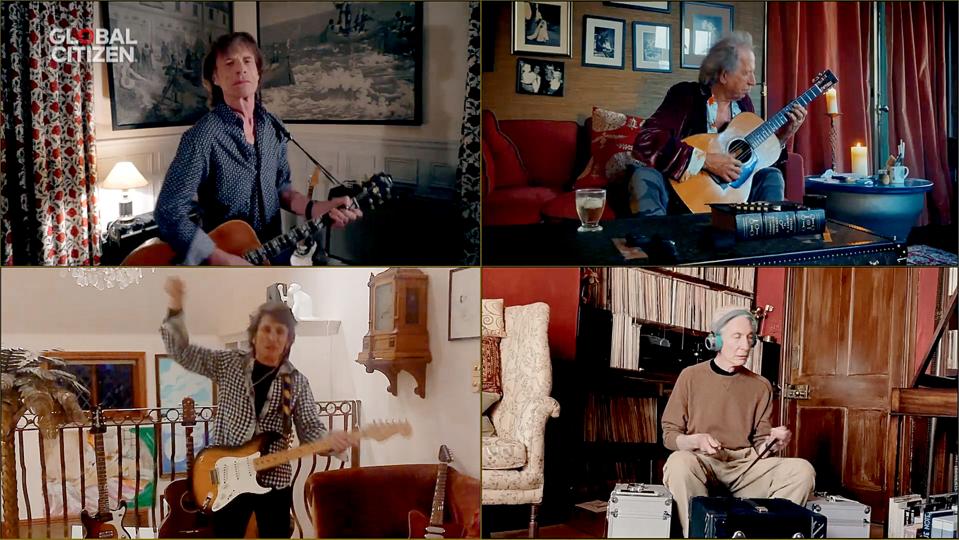 Mick Jagger, Keith Richards, Ronnie Wood and Charlie Watts of The Rolling Stones perform “You Can’t … [+] Always Get What You Want,” during the “One World: Together At Home” concert. (Photo by Getty Images/Getty Images for Global Citizen )

The event was a collaboration between the WHO and Global Citizen, an international advocacy organization. The roll call for the concert read like a response to a request to “name as many musicians as you can in 30 seconds.” Lang Lang, Rita Ora, Black Coffee, Common, Ellie Goulding, Jacky Cheung, Usher, Taylor Swift, Paul McCartney, the Rolling Stones, John Legend, Stevie Wonder, Jennifer Lopez, Billie Ellish, and Celine Dion were just some of the musicians who performed. Lady Gaga curated the event and also performed during the six hour telecast.

Here is the broadcast:

The concert included some new collaborations such as the finale with Celine Dion, Lasy Gaga, Lang Lang, Andrea Bocelli and John Legend performing “The Prayer.” 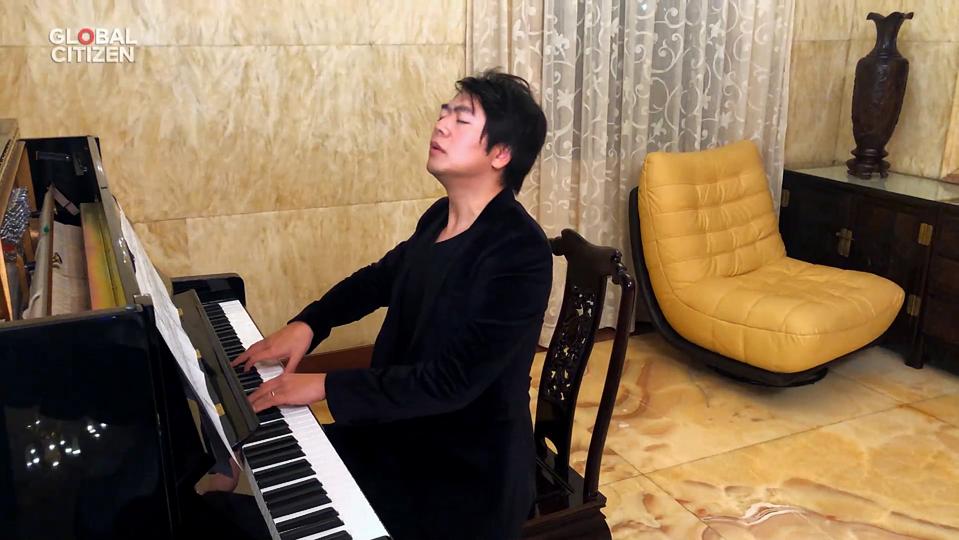 With social distancing measures in place, the musicians of course didn’t gather in a stadium or concert hall but instead performed separately in various locations. Many of the performances were stripped down, without the typical concert technology, special effects, and camera work, which was in many ways refreshing. It was less embellished production and more Zoom meeting-esque, except that it was probably more entertaining than your typical work meeting and everyone appeared to be wearing pants. 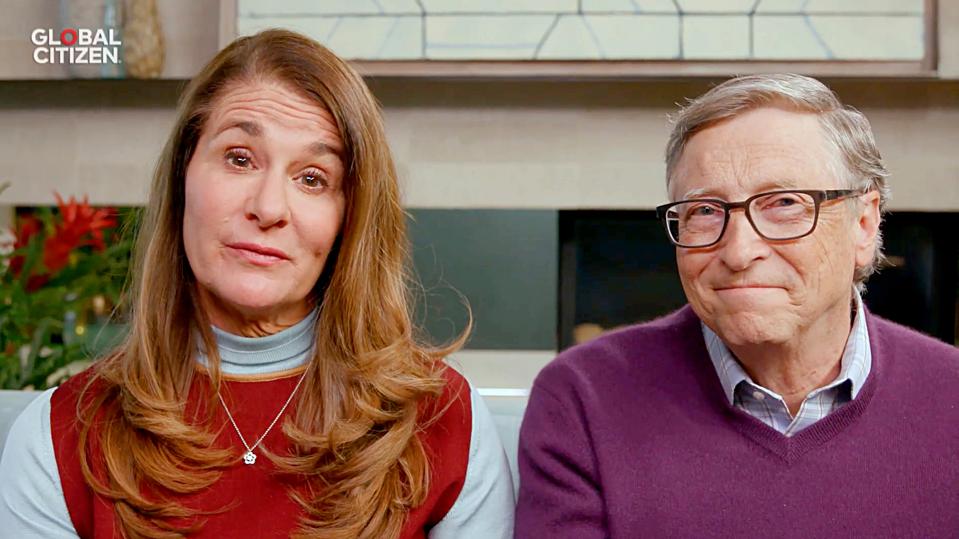 Pictured here are (L-R) Melinda Gates and Bill Gates, who appeared on the broadcast. (Photo by Getty … [+] Images/Getty Images for Global Citizen )

The performances were interspersed with scenes from the front lines, anecdotes from front line healthcare professionals like Esther Choo, MD, Dara Kass, MD, Lane Rolling, MD, Lakshman Swamy, MD, and Shuhan He, MD, and thank you statements from folks like Bill and Melinda Gates, Samuel Jackson, Oprah Winfrey, Heidi Klum, and Matthew McConaughey. All right, all right, all right. And a trio of late night TV hosts, Jimmy Fallon, Jimmy Kimmel and Stephen Colbert, hosted the event. This gave you chance to see that Fallon has what appears to be a faux tree and a large egg-shaped chair in what looked like his den. 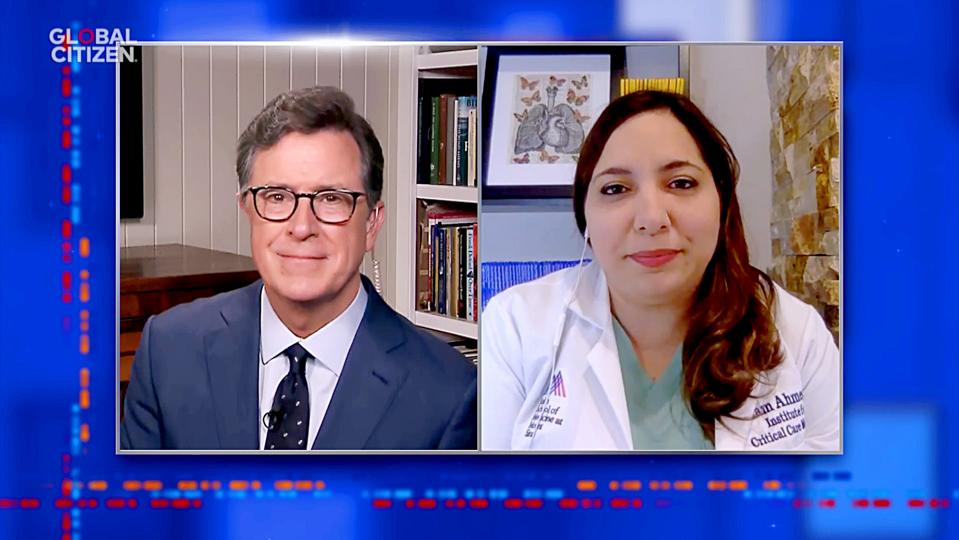 Besides honoring health care workers, another purpose of the event was to encourage people to stay at home, hence the name “Together At Home.” On the list of fun things to do, social distancing can fall below “trying to suck in your eyebrows with a vacuum cleaner.” It isn’t easy to disrupt your life by staying at home but, as I have described previously for Forbes, doing so can reduce transmission of the SARS-CoV2, flatten the curve, and, in turn, keep already overworked healthcare workers from being completely overwhelmed. 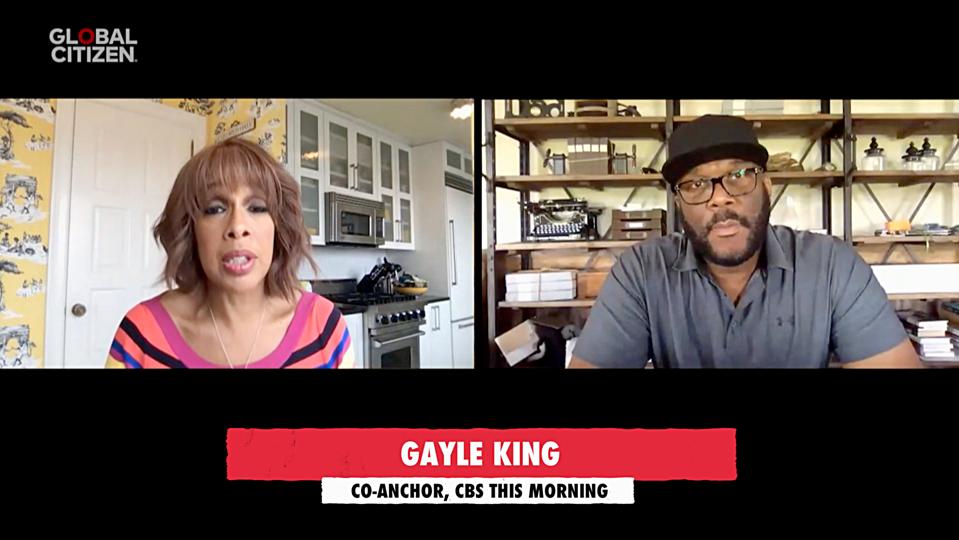 Gayle King and Tyler Perry speak during the event. The global broadcast and digital special was held … [+] to support frontline healthcare workers and the COVID-19 Solidarity Response Fund for the World Health Organization, powered by the UN Foundation. (Photo by Getty Images/Getty Images for Global Citizen )

The WHO started the COVID-19 Solidarity Response Fund WHO in an attempt to raiseat least $675 million to support its Strategic Preparedness and Response Plan for the COVID-19 coronavirus pandemic through April 2020. As described by the WHO on its website, this plan includes:

Reasonable things to do, right? Well, all of this requires money to do, and the WHO hasn’t exactly been flush with funding. And some people actually think it’s a good idea to threaten or even pull funding to the WHO in the middle of a pandemic.

It’s not every day that you see so many top musicians come together to honor health care professionals. But 2020 has not been your typical year, except perhaps for those who normally sit at home in teepees of toilet paper. Doctors, nurses, and various health care workers around the world routinely make many sacrifices and take risks to care for patients. This year the sacrifices and risks are even higher for many, especially with horrendous shortages of needed personal protective equipment (PPE) such as masks and the need to stay separate from family and friends. So it can make a difference to know that people are listening.