Breaking
Expanding Your Business Into Spain: What You Need...
Essentials For Your Office Coming Out Of COVID-19
What Can Marketers Learn From Digital Cults?
Why NASA’s James Webb Space Telescope Will Never...
Increasing HR Effectivity and Efficiency through Software Solutions
The Difference Between Building A Startup In Bull...
Fluor Corp Ranked Among Today’s Top Shorts
Common Pitfalls to Look Out for When Buying...
Will the Olympics go ahead this year?
Pack Up the Big Top: Insights from MozCon...
Best WordPress Themes for Blogs
Get Ready To Rip And Tear, As The...
As Economy Recovers, Loan Approval Rates Increase For...
Lessons Learned—Avoiding The Fundraising Errors That Can Sink...
Top Tips to Help You Effectively Manage Your...
Malaysia’s Carsome, Tycoon Patrick Grove’s Catcha Group To...
Home Business Only An Infrastructure Program Can Unite America
Business 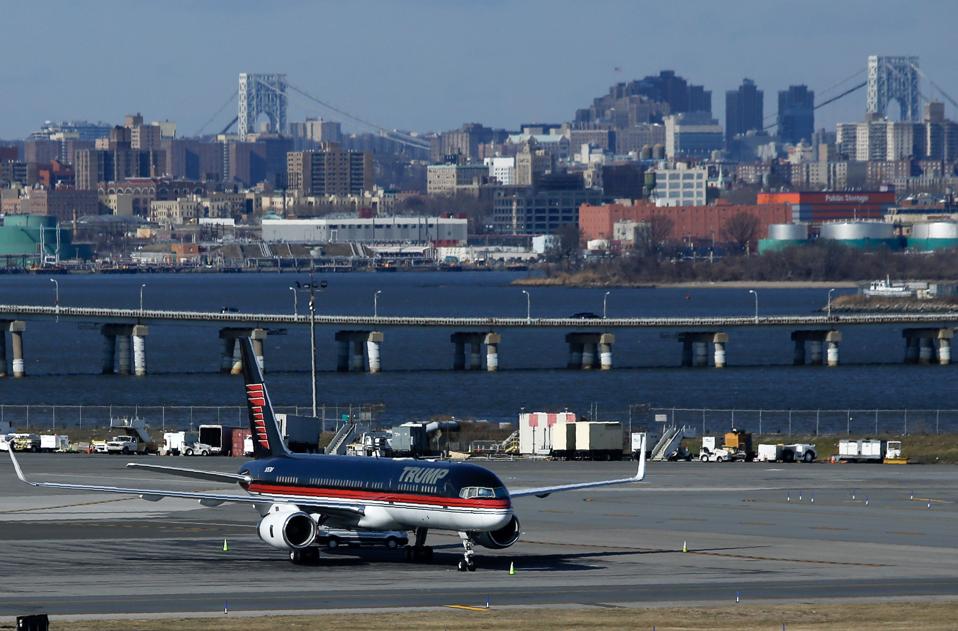 A Trump plane is seen on the runway at La Guardia Airport on January 25, 2019 in New York. – The … [+] Federal Aviation Administration has stopped flights into LaGuardia Airport in New York due to major staff shortages amid the partial government shutdown. Airport delays are reported across the northeast due to air tragic controller shortage. (Photo by KENA BETANCUR / AFP) / The erroneous mention appearing in the metadata of this photo by KENA BETANCUR has been modified in AFP systems in the following manner: [Trump plane] instead of [Trump airline plane]. Please immediately remove the erroneous mention from all your online services and delete it from your servers. If you have been authorized by AFP to distribute it to third parties, please ensure that the same actions are carried out by them. Failure to promptly comply with these instructions will entail liability on your part for any continued or post notification usage. Therefore we thank you very much for all your attention and prompt action. We are sorry for the inconvenience this notification may cause and remain at your disposal for any further information you may require. (Photo credit should read KENA BETANCUR/AFP via Getty Images)

When I try to defend the eurozone financial system to Eurosceptics, or even Europhiles, I remind them that the early years of the dollar were just as difficult as the eurozone crises of recent years. For example, the Whiskey rebellion of 1791 led to a contest between Alexander Hamilton’s Treasury and individual states, and his ultimately successful resolution of the crisis paved the foundation of the American financial system.

Amidst the global economic carnage caused by the coronavirus crisis, many (mostly in London and New York) expect the euro system to face another existential crisis. Though European politicians have generally failed to learn the lessons of past euro crises in that many reforms have not been executed, the euro and EU are more robust than many think.

While the euro is not yet as credible as the dollar, the surprise in coming months may be that America begins to look more like Europe.

Governors to the fore

Think of it this way. Governors of individual states have never enjoyed such prominence, with for example the governor of California referring to it as a ‘nation-state’. A recent FT survey showed that individual governors are more trusted than the President. In this respect the state governors are like the prime ministers of European countries.

In addition, American states are grouping together to form pacts to coordinate the ending of the lockdown (in Europe it is similar). Unlike Europe though, the political leaning of states is also a determining factor in the speed with which they are reopening, as is the President’s political and fiscal treatment of them. In time, this will make states more distinct economically and politically, and less united.

The decisive factor may be the impending credit crunch. We are now moving past both the initial financial shock of the coronavirus crisis, and the comfort of the financial morphine as provided by the Fed and Congress is wearing off. Yet, there is now much less that both the Federal Reserve and Treasury can do to forestall the closure of hundreds of thousands of businesses across America.

Against this backdrop investors are pointing to a growing widening of bond spreads for municipal bonds, and the rhetoric surrounding New Jersey and Illinois echoes with the way Italy and Greece are spoken of. Oil sensitive states may soon also come under pressure.

As the finances of individual states deteriorate, so too will be the expectation of support (bond buying by the Fed), and then, the moral hazard arguments that many in Europe deploy to sanction ECB buying of periphery debt, will resonate in the US.

It is also worth noting that like Japan and Europe in recent years, financial markets have just started to price in negative interest rates in the US (for next January), something that could rattle consumers and its banking sector.

Perhaps the worst thing this virus can do to America, beyond the human tragedy, is to increase the disparity of economic circumstances across states. In a country with extreme wealth inequality and an incomprehensible gap between sharply rising unemployment and a loft stock market, ‘intra-state inequality’ may grow. Migration between states and the current system of federal transfers will not be sufficient to balance this out.

Here, Europe is worth a look. One of the great achievements of the European Union has been the way it has funded infrastructure investment in relatively poorer countries. Americans visiting Ireland will be familiar with the ‘funded by the EU signposts’.

The lesson for America is that at a time when transport, telecoms and educational infrastructure needs to be badly upgraded, this should be done in a way that helps to equalize rather than exacerbate the differences between states. It is a task for the next president, whomever that is. However, the notion that ‘America’ needs to be put back together again needs to be debated now.