Breaking
How To Use Content To Draw Others To...
Apple Loop: New iPhone 13 Leaks, Apple’s App...
25 of the Best Add-On Slack Apps to...
How to Resolve Duplicate Content
How Millennials Are Changing The Face Of B2B...
Bloggers of the Month: Kelly Jackson & It’s...
As Bitcoin Suddenly Surges Over $50,000, The Price...
In The Race To Retail Dominance, Customer Service...
Meet Onesimus, The Enslaved Man Who Saved Boston...
How to Build a Sales Forecast Model
The Unexpected Ways COVID-19 Has Forever Changed What...
Google Posts: Conversion Factor — Not Ranking Factor
How To Bring Your Branding To Life
Coinbase Cofounders And Investors Poised To Rake In...
How To Stay Top-of-Mind For Your Audience With...
Introducing The Chrome Extension: Get Share Counts, Links...
Home Business OPEC Faces Same Old Problem Of Oil Supply Glut From New Producers
Business 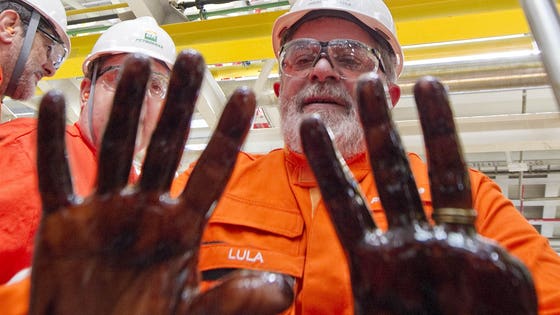 Growth in U.S. oil production may have started to slow, but the Organization of the Petroleum Exporting Countries (OPEC) is sorely mistaken if it thinks it will soon be out of the supply-cut game.

While U.S. shale has been overwhelmingly responsible for the rapid growth in non-OPEC supply over the past five years, other producers outside the cartel, mainly Brazil, Norway, Guyana and even Canada, are now poised to add substantial incremental barrels in 2020 and beyond.

That means new volumes from rival non-OPEC producers could offset even a significant slowdown in U.S. oil production growth. And that may force OPEC and its partners, particularly Russia, to continue making painful supply cuts for the foreseeable future to keep prices from tanking.

To be sure, U.S. producers will still lead the way in growing non-OPEC supply in 2020, despite slowing domestic investment and drilling activity.

Peak shale growth has probably been reached, and those rates from past boom years are unlikely to be matched again. But that won’t matter for OPEC if other non-OPEC suppliers make up the difference.

For too long, the world has focused exclusively on shale as the primary thorn in OPEC’s side. But Brazil, Norway and Guyana are all gearing up to deliver massive new flows of offshore oil. Producing regions outside of the United States will provide at least half of non-OPEC supply growth in 2020, which spells big problems for Saudi Arabia and its cartel allies.

Brazil’s state-controlled Petrobras recently unveiled a five-year plan to spend $76 billion from 2020-2024 to grow output, mainly from its fertile geologic “pre-salt” formations, by nearly 30 percent to 3.5 million barrels of oil equivalent a day by 2024.

Meanwhile, international oil companies keep racking up new finds offshore Guyana, where 16 discoveries in recent years have driven estimates of recoverable resources to more than 6 billion barrels of oil equivalent. The success puts the South American country near the top of global rankings for conventional oil exploration, making it one of the hottest upstream plays in the world.

Guyana’s entrance as a major producer is also imminent. Exxon Mobil counts Guyana as a significant source of future low-cost production and aims to ramp up production at the Stabroek field to 750,000 barrels a day by 2025.

Neither Brazil nor Guyana is a “flash in the pan” producer. Real money is being invested in bringing these massive offshore reserves — where breakeven costs are resilient and typically below $40 a barrel — to the market over the coming decade.

Norway, on the other hand, is a mature producer, but in the near-term, the recent start-up of its enormous Johan Sverdrup field contributes to the non-OPEC supply glut. The 2.7 billion barrel field in the North Sea is expected to produce for 50 years, reaching its full capacity of 660,000 barrels a day around 2022.

Likewise, Canada is another mature producer that generates less investor excitement than Brazil, Guyana, or its shale producing neighbor to the south. But the gradual easing of Alberta’s curtailment policy, which has raised local oil prices for Canadian producers sufficiently, means more barrels will spill onto the market in the near-term, as well.

None of this is good news for the OPEC cartel, stuck as it is in a neverending cycle of production cuts.

Global benchmark Brent oil prices and U.S. crude may have recently rallied past $65 and $60, respectively, driven by optimism over OPEC’s latest supply cut agreement and the Phase 1 U.S.-China trade deal. But oil markets still look oversupplied in 2020, and shale is no longer the lone culprit. It’s hard to see a sustained rally in oil prices at the moment.

No producer benefits from low oil prices, including U.S. energy companies. But OPEC’s actions in recent years suggest the cartel and its petro-state members need higher prices more than their non-OPEC brethren. And that points to further OPEC cuts when the current deal expires on March 31. Either that or a significant pullback in prices.

2020 Startup Predictions: Top Trends to Watch Out For