For agricultural startup TechShelta, just having an idea to create an Internet of Things platform to help greenhouse farmers in Ghana wasn’t a big deal. The need was obvious: Ghana’s limited rainfall means the country needs to import most of its food, whether its onions from Niger, tomatoes from Burkina Faso, or garlic from China.

“Everyone in the country seems to have some idea about how to improve the Ghanaian local economy through greenhouse agriculture,” says Bob Hawkson Amponsah, cofounder and head of business development for TechShelta. “But ideas don’t get work done.” 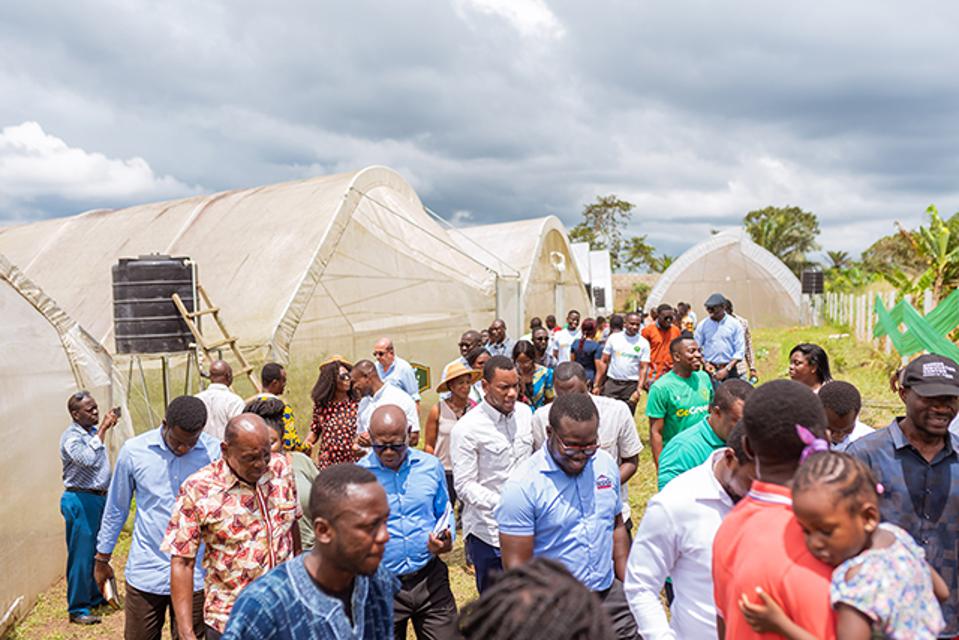 Startup TechShelta celebrates the opening of its greenhouse village in Ghana.

Getting the work done—that’s what startup founders like Amponsah are focused on as they look ahead to 2020, laying plans to build the right team, hone their products, and expand their customer base.

For any founders who lose sight of that practical focus, 2019 offered plenty of cautionary lessons, as some of the most high-flying “unicorn” startups faced falling market valuations, says Jason Williamson, vice president of Oracle for Startups and Oracle for Research, which are Oracle programs to support entrepreneurs, researchers, and university innovators.

To succeed in 2020, Williamson advises founders to trade their mega-funding, grow-at-all-costs strategies for sound business models and partnerships that provide the right mix of skills, tools, and markets to help them “earn it out.”

“When we first started raising money, we already had 15-plus charter customers,” says Zachary MacRunnels, CEO and cofounder of Reconstruct. “This put us in a very strong position, and helped us make a more pragmatic decision about who we were going to take investments from.” After reviewing many different investor options with various valuations and terms, “we found a company that really believed in our vision, saw the upside in our business model, and helped us find adjacent opportunities where we could expand,” he says.

Ringing in the New Year with a strategy based on business fundamentals—rather than unicorn aspirations—is a well-planted first step. Here’s perspective from three founders of up-and-coming startups—each of them part of the Oracle for Startups program—on their top execution priorities for 2020:

Get Your Work Done Up Front

When TechShelta launched in December 2018, its #1 priority wasn’t to raise mountains of venture capital, but rather to build a team of experts from different domains who could turn their ideas into commercially viable products. For example, it has hired people with backgrounds in agronomy, operations, marketing communications, and technology.

After 10 months of research and vetting their ideas, the company rolled out a platform that provides Ghanaian farmers with consulting and advisory services to purchase, install, and farm their greenhouses, technology automation to operate them, a greenhouse village to commune with other farmers, and an online marketplace to help farmers purchase inputs from suppliers, such as seed and fertilizer, and then sell their fresh produce locally.

“Because our team spent time working with farmers, building out proof of concepts, and earning our customers’ trust, we’re now ready to expand TechShelta throughout and beyond Ghana,” Amponsah says. “By the end of 2020, we expect to replicate our greenhouse villages in new markets across Ghana, and export produce for farmers across all of West Africa in 2021.”

Don’t Get Mad, Get Data

At the UK-based startup Gapsquare, bringing pay equality to the workplace ranks as the #1 priority. Gapsquare’s software helps companies analyze their HR and payroll data to understand whether and where they have gender pay gaps, and provides guidance on how to narrow those gaps. Using machine learning algorithms, Gapsquare’s software tracks employee occupations, performance, and pay, and then looks for patterns and biases across all sorts of personnel characteristics, such as gender, age, and disability.

But finding such revelations can be difficult to face.

“Discussions around equal pay and gender parity can get very political and emotional,” says company CEO and cofounder Zara Nanu. For these reasons, Nanu points to the data that its software helps capture and analyze as the linchpin of Gapsquare’s future growth.

“When you face managers with data about their organization’s current pace of progress, and show them how they can stay relevant to the next generation of talent—generations that are increasingly concerned with fairness—that’s when these issues stop being political and emotional, and start becoming manageable,” Nanu says.

Put Emerging Tech to Practical Use

Reconstruct wasn’t just pragmatic about choosing investors, it also chose emerging technologies when it launched its platform in 2016 that were ready to deliver results right away.

By embedding drawings, models, and augmented reality technology into its software platform, Reconstruct is already helping property owners, financiers, general contractors, and developers manage real-estate development projects from their desktops, tablets, and smartphones. The company is using its venture funding to introduce new 2D and mobile products and expand its customer base in new markets worldwide.

Using Reconstruct’s 3D viewer, a feature launched in 2018, a property owner based in, say, Brazil can check the status of multiple construction projects in Japan, Australia, and the US, without leaving her desk. Reconstruct uses images that overlay how a building should look at a given point of production on top of images of the current construction, alerting building owners and general contractors of any potential errors that could create hazards or otherwise delay their current projects.

“Our top priorities for 2020 are to help our customers get more visibility into their projects, make better use of their resources, and ultimately increase the size of portfolios that they can manage,” CEO MacRunnels says.

The platform uses a process called photogrammetry to record, measure, and interpret images and thus assess the state of a physical property. It can then compare that with a simulation of what the space should look like based on building plans, and thus spot construction errors or delays much faster.

“We’re able to let customers know instantly if a girder beam should move an inch to the right, which could help better balance load stress, or if a cable tray should move three feet to the left to avoid blocking a fire sprinkler,” says MacRunnels.

While such changes may seem trivial, large-scale construction projects can cost up to $1 million a day, MacRunnels says, so even a little downtime can cost tens of thousands of dollars. “We’re not just helping our customers avoid rework, hazards, and project delays, we’re helping them increase the structural integrity of their properties, protect their investments, and build more places for people to live, work, and play,” MacRunnels says.