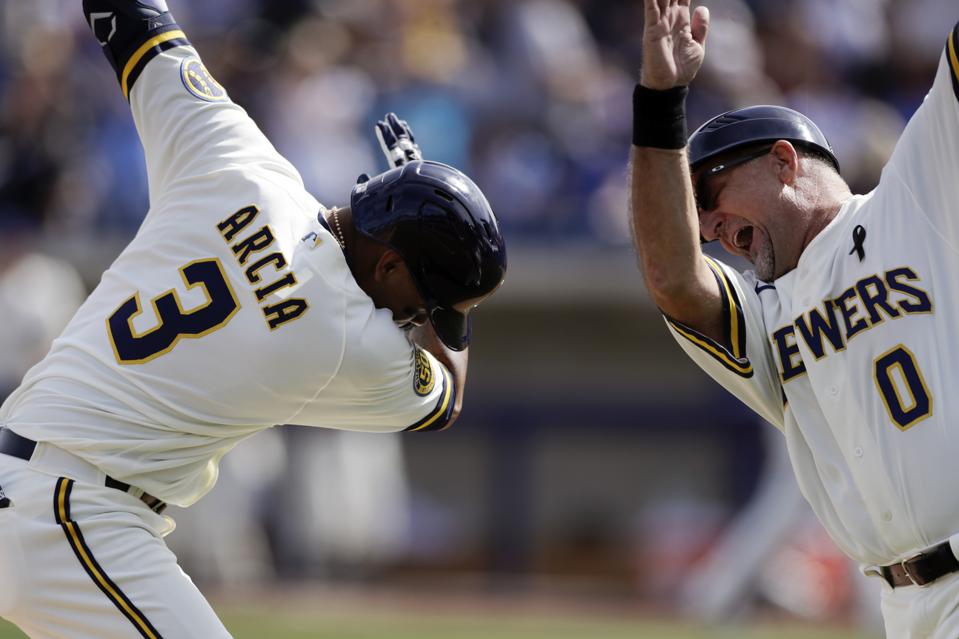 Nobody on the Milwaukee Brewers’ roster needed a strong showing in spring than shortstop Orlando Arcia.

Once the franchise’s most highly-touted prospect since Ryan Braun, Arcia had fallen so far offensively and slipped just enough on the defensive side — where his stellar play had been enough to overcome any offensive woes — that the Brewers acquired shortstop prospect Luis Urias from San Diego over the winter.

The move put Arcia on notice and so far, he’s responded in a big way. Through nine Cactus League games, Arcia is slashing .304/.304/1.000 with five home runs, 10 RBI and a whopping 1.304 OPS while striking out just twice in 23 plate appearances.

“This is a big spring for Orlando and this is the way you want to start it,” Brewers manager Craig Counsell said.

Arcia caught a break when a Urias needed surgery to repair a fracture in his left wrist, sidelining him for most of camp. He’s expected to see game action late this week and could still be in the mix for an early-season roster spot but for the time being, Arcia has reestablished himself as Milwaukee’s top shortstop — though, he’ll have to keep it up if he wants to hold onto his job.

“Putting challenges in front of Orlando has always been effective,” Counsell said. “I think he thrives on it and I think he almost needs it. He can handle it. He’s been very productive in those situations and those spots.” 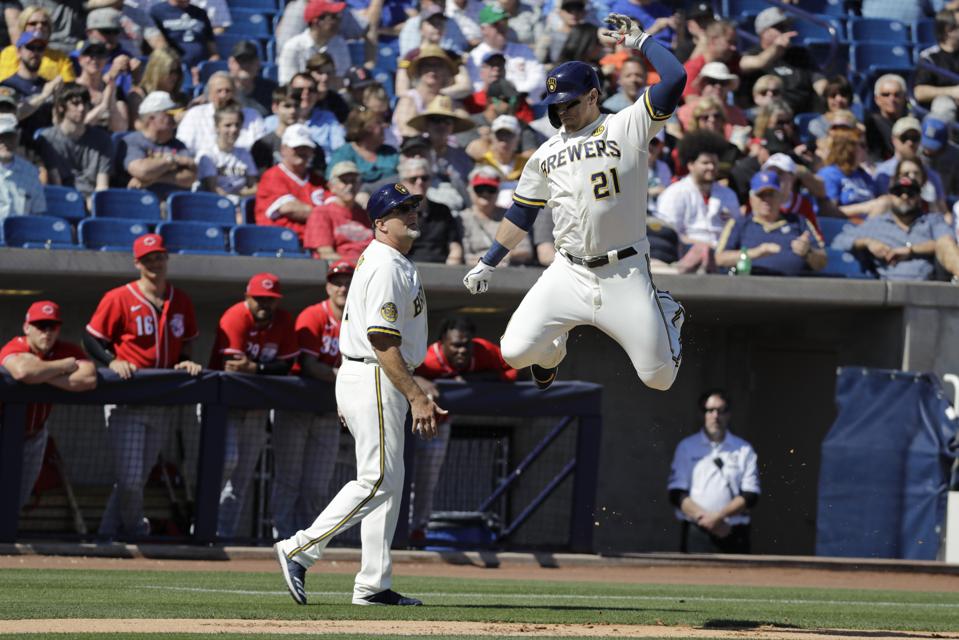 Morrison signed a minor league deal with the Brewers in January but has absolutely no interest in playing in the minor leagues this season and is certainly playing in a way that supports his claim, going 7-for-24 with three home runs, seven RBI and a 1.037 OPS though 10 games.

“When I’m healthy, I’m a borderline All-Star,” Morrison said earlier in camp. “I’m healthy now. I don’t see why that would change. I’m another year older, another year wiser.”

Morrison, 32, hit 38 home runs for the Rays in 2017 but after signing with the Twins in 2018, was hampered last season by a hip injury that limited him to just 95 games. He signed a minor league deal with the Yankees for 2019 and when a big league promotion didn’t come, he opted out and signed with the Phillies who brought him up for 29 games in August and September.

Morrison spent most of the season with Philadelphia’s Triple-A affiliate, where he hit 18 home runs and slugged .640.

The thought of having Morrison’s power on the bench is appealing for Counsell and while the veteran slugger would be a perfect fit for the new 26th spot on the active roster, not being on the 40-man roster — not to mention a lack of positional versatility — are small, but notable, obstacles to earning a spot on the team.

“Logan is a proven major league hitter,” Counsell said. “That’s what’s attractive about him. He’s in competition to be a bench bat but a dangerous at-bat late in the game with a chance to leave the park is what he offers.”

If the Brewers can’t find room for him on the big league roster, Morrison’s contract has an ‘out’ clause that will let him seek work elsewhere with 10 days left in spring training. He’d prefer to not utilize that option and stay with the Brewers.

“I hope I get opportunity to show what I can do,” Morrison said. “And if it’s not here in the big leagues, somewhere else. I’m not a Triple-A player. I proved that last year and years past. So I’m not going to Triple-A. We’ll figure out what happens.” 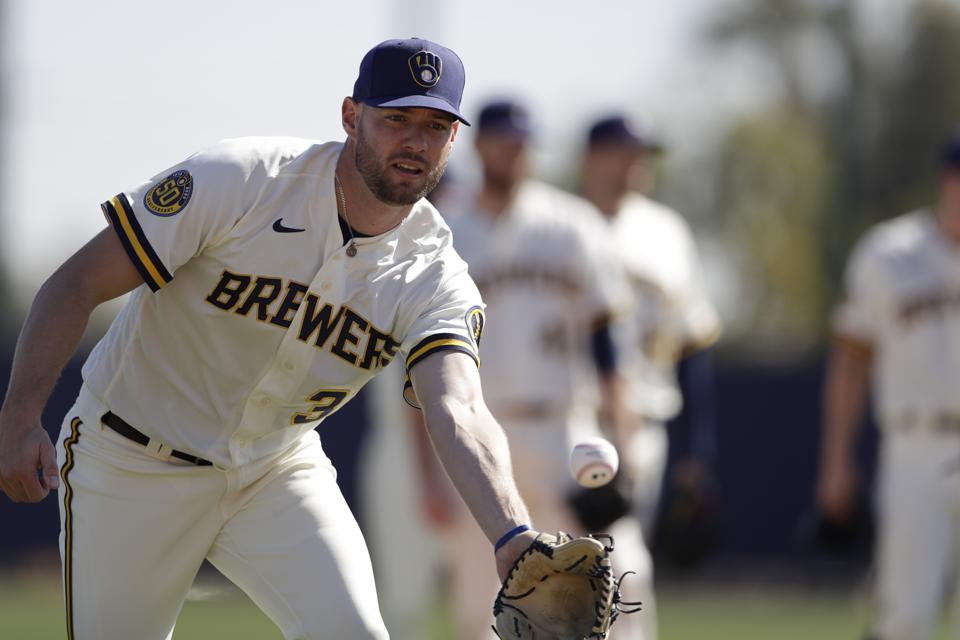 With so much attention focused on returning staff ace Brandon Woodruff and a battle between Corbin Burnes, Eric Lauer and Freddy Peralta for the final rotation spot, Adrian Houser has gone about his business quietly as he prepares to make his first Opening Day rotation.

Through three appearances covering 6 1/3 innings of work, the young right-hander has allowed a run on three hits while striking out seven batters.

“His stuff is good and he’s just in a good place,” Counsell said. “Everything is clicking for him. He’s healthy, the ball’s coming out really good. … Now it’s just about logging some innings, ramping up and staying healthy.” 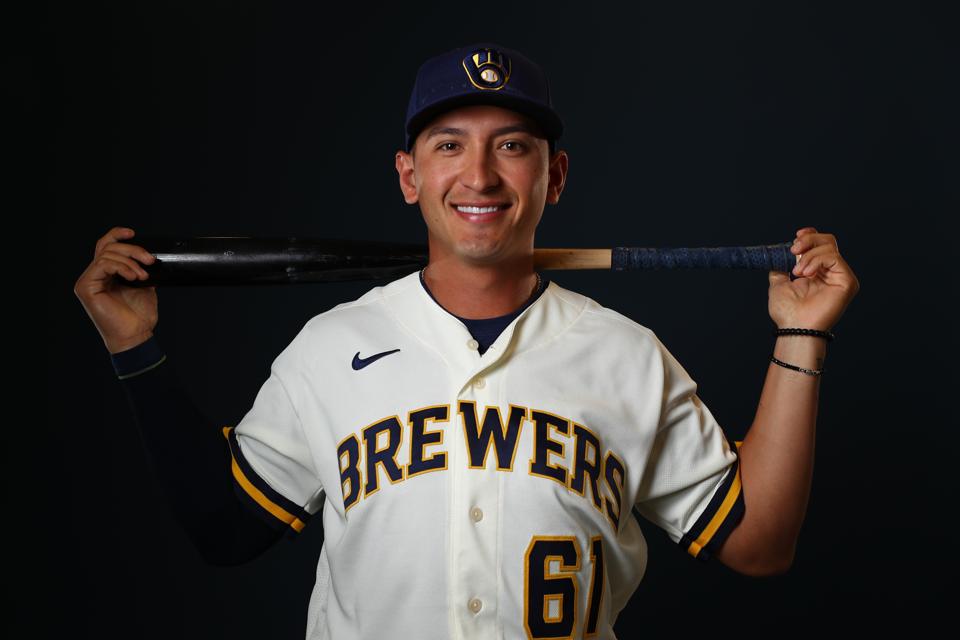 Mark Mathias has opened eyes with solid play at shortstop and left field this spring. (Photo by … [+] Jamie Schwaberow/Getty Images)

Had the Brewers not signed jack-of-all-trades free agent Brock Holt at the start of spring training, Mathias might be in the running for an Opening Day roster spot.

Mathias, 25, was expected to fill a utility infield role when came to the Brewers in a trade with Cleveland last November. But then, the team traded for Urias, claimed Ronny Rodriguez off waivers and signed free agents Eric Sogard, Jedd Gyorko and Holt before camp opened, leaving Mathias on the outside looking in.

Yet, he’s made the most of his opportunities. Though he’s just 3-for-20 at the plate, he’s made a strong impression on the coaching staff with his play in the field which has included significant action at shortstop and in left field, where Mathias said he hadn’t played “since (he) was a kid.”

“I give him a lot of credit for taking on this challenge,” Counsell said. “He’s a guy who’s had to work for everything he’s got. He went to a smaller college, didn’t play his freshman year but now he finds himself in a big-league camp competing for a roster spot.” 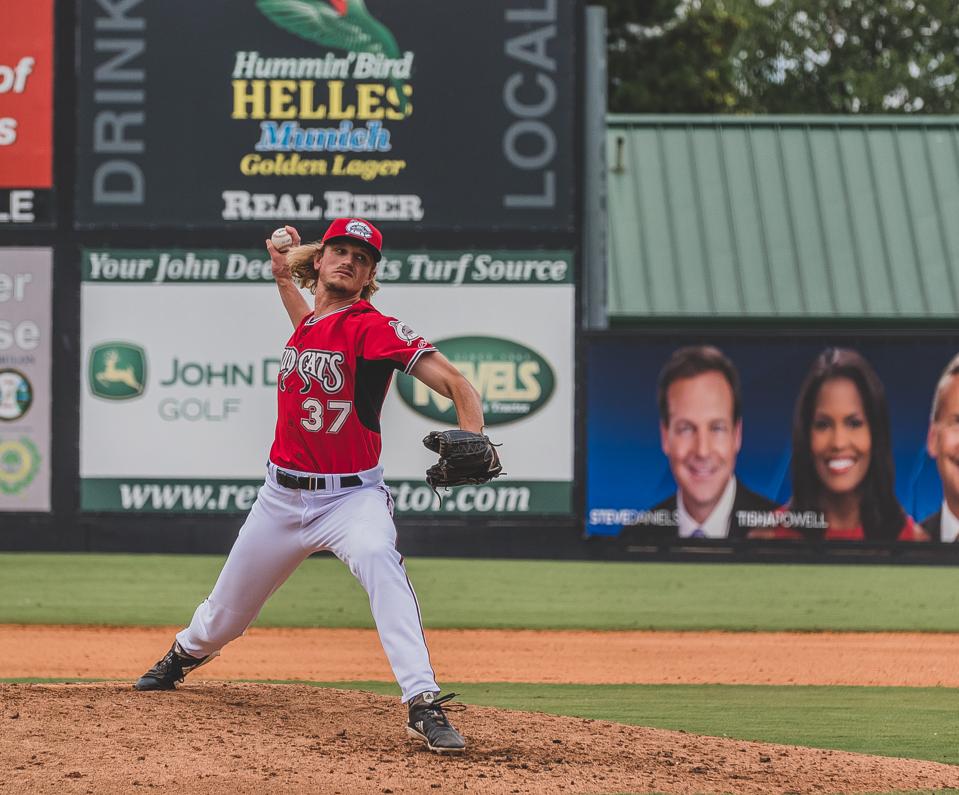 Phil Bickford posted a 2.48 ERA last season for Class A-Advanced Carolina and has struck out six of … [+] the nine batters he’s faced in three Cactus League outings this spring.

hil Bickford has struck out six of the nine batters he’s faced in three scoreless innings this spring, re-establishing himself as a promising prospect in the Brewers’ system.

Acquired in a 2016 trade that sent left-hander Will Smith to the Giants, Bickford’s career was stalled by a 50-game suspension for violating baseball’s drug policy — his second offense — in 2017. While serving that suspension, Bickford underwent surgery to repair two broken bones in his throwing hand.

At the time of the suspension, Bickford was the No. 5 prospect in Milwaukee’s system, according to MLBPipeline.com and the No. 54 prospect in all of baseball. When he returned to action in 2018, he posted a 4.67 ERA with 41 strikeouts in 34 2/3 innings of work for Class A-Advanced Carolina but bounced back in a big way last season, going 3-0 with a 2.48 ERA and 54 strikeouts in 32 2/3 innings of work for the Mudcats.

If You Can’t Start Your Startup Hire Someone Who Can

If China Invades Taiwan, This Is What The...

How Southeast Asian Startups Are Creating A Digital...

How Masal Bugduv’s Dream Move To The Premier...

Retail Pain Will Get Worse Before It Gets...