Breaking
The WFH Revolution: How Covid-19 Is Changing The...
eToro Announces Staking For Cardano And Tron
Fintech Startups: Plan For Your Customers’ Emotional Realities
The End Of Third-Party Data — Finally
The Scientologist Billionaire Trying To Make A New...
Mission-Driven Fintech Kontist Shakes Up The Future Of...
What Can The Simple Fact That ‘We Exist’...
Stock Market: Here Comes October With Scary Tricks...
Farmers, College Students, And Food Banks Across The...
Thinking Of Writing A Book To Grow Your...
Microsoft Security Report Highlights New Sophisticated Threats From...
3 Steps To Help You Build Entrepreneurial Confidence
SMB Fintech Darling Kabbage To Be Acquired By...
Silicon Valley’s Next Target: The One-Person Business
The Small Business Code Of Ethics
President’s Remarks About COVID-19 At First Debate True...
Home Business Oscar Valdez Vs. Adam Lopez, Carl Frampton Vs. Tyler McCreary, Video Highlights, Weekend Fight Reviews
Business 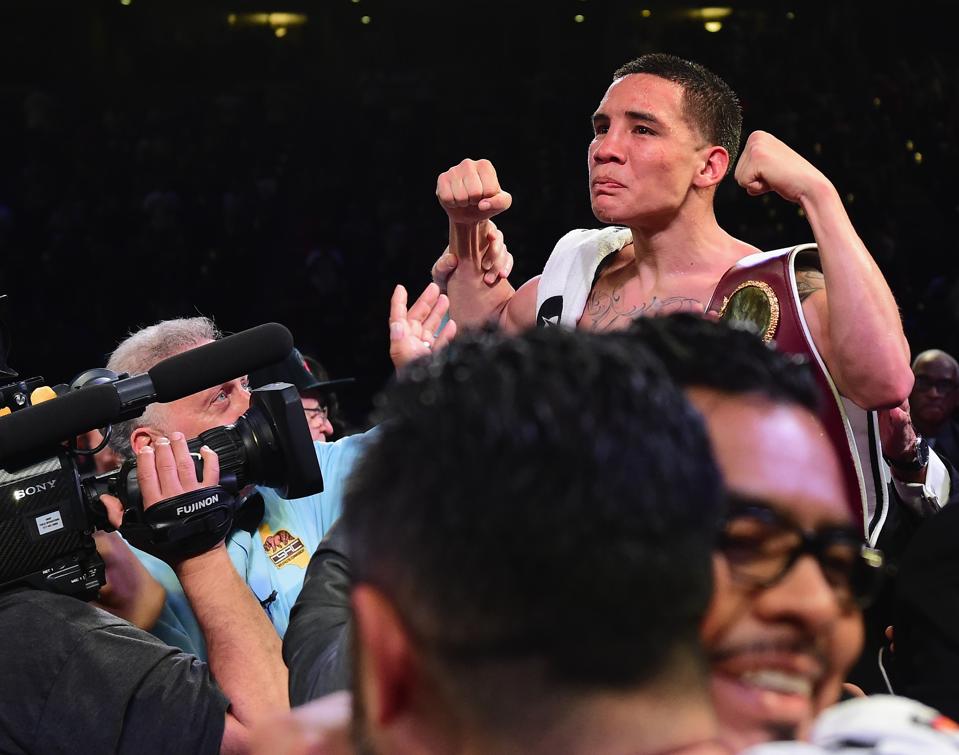 Oscar Valdez got knocked down and was in big trouble against last-minute replacement Adam Lopez. Carl Frampton put his undefeated opponent through a hellacious body shot workout. And Cecilia Braekhus once again dominated an overmatched opponent.

—Before facing last-minute replacement Adam Lopez (13-2), Oscar Valdez (27-0, 21 KOs) believed he was going to meet Andres Gutierrez, a solid boxer who had always lost to the elite fighters. But Gutierrez weighed in a ridiculous 11 pounds overweight on Friday, and he was removed from the card. That gave Lopez a shot at Valdez (not to mention a $75,000 payday that was more money than he made from his previous 14 fights combined). Though Valdez was a -2000 favorite, Lopez shocked him with a straight-right, left-hook combo that knocked him down in the second round. “I was very surprised,” Valdez told ESPN+ afterward.

Lopez had a number of good rounds following that—I had Lopez winning 58-55 through six —but Valdez rocked him in the seventh, knocking him down with a nasty left hook. Then, after Valdez hurt him some more, referee Russell Mora prematurely stopped the bout. I loved Lopez’s performance. I disliked the stoppage. Valdez—who made a $300,000 purse in his 130-pound debut—got the benefit.

Before the fight, Valdez talked about wanting to meet Miguel Berchelt, the best fighter in the division. Berchelt was in attendance and greeted Valdez with smiles after the fight. I can understand why. I think Berchelt would knock out Valdez, and I think Berchelt knows that.

—Making his first step into the 130-pound junior lightweight division, Carl Frampton (27-2, 15 KOs), a two-division titlist who was the BWAA’s Fighter of the Year in 2016, won a shutout unanimous decision against the previously undefeated Tyler McCreary (16-1-1). In the middle rounds, Frampton showcased a phenomenal body attack, and it was enough to force McCreary to drop to a knee at the beginning of the sixth. Then, a double-hook to the body in the ninth dropped McCreary again. But McCreary didn’t give up and forced Frampton to take him the entire 10-round distance, even though it was clear that Frampton was trying his best to knock him out. Still, it was a good showing by Frampton, especially since it’s been nearly a year since he was in the ring.

Now, Frampton—who made a $250,000 payday vs. the $65,000 purse for McCreary—could get a shot vs. junior lightweight titlist Jamel Herring, who was in attendance at the fight. Herring told ESPN+ afterward that Frampton performed like a champion in the ring. “He looked good,” Herring said. “I can’t take nothing from him.” Herring even floated the idea of traveling to Frampton’s hometown of Belfast to meet him in the ring. In some unfortunate news, Frampton said he hurt his hand in the second round—which has been a big issue for him lately and which caused his long layoff.

—Another undisputed welterweight championship defense by Cecilia Braekhus (36-0, 9 KOs). Another dominant decision for the best women’s fighter in the world. Braekhus beat Victoria Bustos (19-6) decisively on Saturday—Bustos was basically a no-hope challenger—but frankly, it’d be more interesting to see the 38-year-old Braekhus take on somebody like Katie Taylor or Claressa Shields to see if Braekhus is truly the No. 1 pound for pound fighter. It’d probably be difficult for Shields to lose enough weight to get down to 147 pounds, but here’s hoping that Braekhus can find a suitable challenger soon.

Wall Street Alert: Companies Are Not Prepared For What Is About To Hit Them