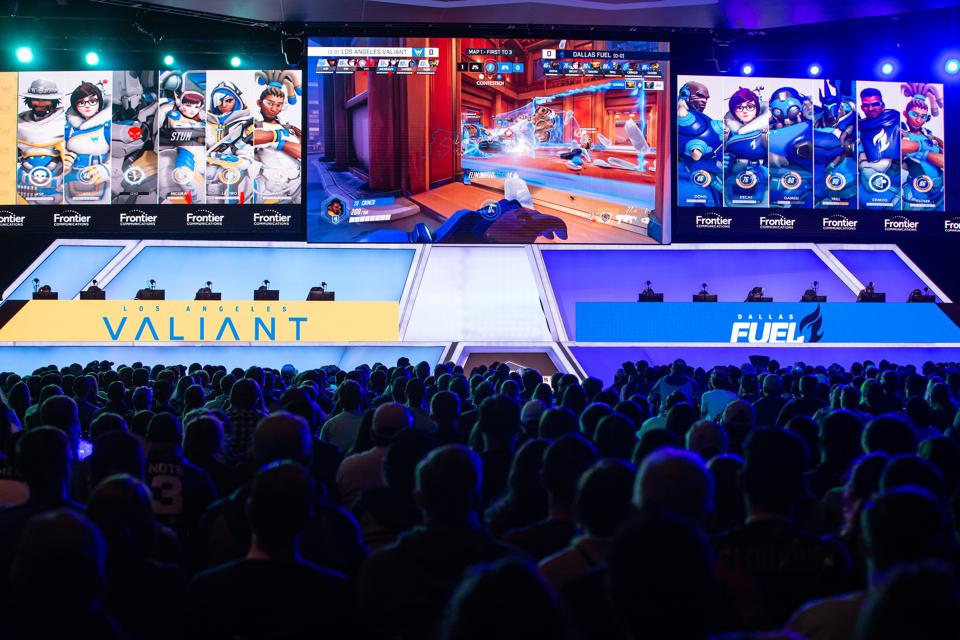 A look at a homestand from the 2020 season’s opening weekend in Dallas. Due to the coronavirus, … [+] Overwatch League announced Tuesday that the remainder of its regular season matches would be played online. Photo: CARLTON-BEENER for Activision Blizzard Entertainment

For a league that for two years slowly built itself up to host match weekends this season in each of the 19 cities that host its 20 teams, it was a tough, but necessary and sobering blow as it deals with the realities in which we currently live. The schedule for the rest of the regular season, the playoffs and the Grand Final will be determined at a later date.

“Given the ongoing global health situation, and in discussion with all our teams, we are officially shifting the remaining regular-season homestand events for Weeks 14-27,” Overwatch League said in a news release.

OWL released its schedule for the next two match weekends, with the majority of the series featuring teams from the Pacific Conference. Due to COVID-19, the four Chinese-based teams— Guangzhou Charge, Shanghai Dragons, Chengdu Hunters and Hangzhou Spark— and the Seoul Dynasty, the five teams that make up the Pacific Conference’s eastern division, didn’t compete until this past weekend, the first in the new online-only format which was released earlier this month. The weekend action also saw the 2019 champion San Francisco Shock surprisingly lose both its matches to each of the two Los Angeles clubs, the Gladiators and the Valiant.

Despite some significant lags and technical issues on YouTube during the first online-only weekend that had some fans complaining and wishing the league would go back to original streaming partner Twitch, the league said it was pleased with the overall quality of the fully remote broadcast. OWL will continue to strive to provide top-notch competitive action while its production teams, its broadcasters and its teams and players work from the safety of their own homes during this time, the league said.

After broadcasting the league’s matches for the first two seasons in a state-of-the-art studio in Los Angeles, putting together a quality product from numerous remote locations provides a significant challenge to Overwatch League which they worked to prepare for in the two-week period without matches. In addition to the broadcasters and talent for OWL’s Watchpoint studio shows working remotely, the league has a team of expert camera and technical crew members called observers who have the knowledge and insight to give viewers the optimal camera views on the most important player during each and every Overwatch League map and series. Working remotely likely makes that job exponentially more difficult.

Until coronavirus spread around the world, Overwatch League was enjoying a successful string of homestand weekends in a number of Atlantic Conference cities in the U.S. including New York, Dallas, Philadelphia, Washington, D.C. and Houston. The league formulated a plan to hold off on Asian-based homestands until conditions improved there, while hoping that long-awaited lucrative weekends could be played there. For the 2020 season, that goal will not be realized.

For every major sports league, every business and every household around the world, we’re all coming to terms with a new normal for the foreseeable future as everyone works to contain the spread of this deadly virus. For Overwatch League, that means a 2020 regular season with two different homestands every week for seven months won’t occur as planned. OWL will try to proceed as normal with an online-only format until the world is safe to congregate in again, and attempt to bring a much-needed escape to its fans each weekend.

Drug Stock’s Rally Could Have Room To Run

Apple iOS 13.4 Release: Should You Upgrade?