Breaking
New Zealand Apparel Brand Aims To Go Entirely...
Among Republican-Led Rural States Vermont Is Vastly More...
Bitcoin Braced For Fresh $750 Million Shock As...
Meet Ilara Health: Health-Tech Company Improving Maternal Health...
Meet Glyn Aikins & Riki Bleau: The Duo...
Blockchain’s New Standard Bearer
‘Fortnite’ Chapter 2, Season 4, Week 10 Challenges...
Channel Your Impact With a Self-Directed IRA
How To Reach Your Customers This Holiday Season
10 Key Steps That Will Help You Make...
TikTok Will Limit And Label Videos Prematurely Claiming...
How A British Graphic Novel Publisher Is Leading...
How A British Graphic Novel Publisher Is Leading...
Dow Plunges 600 Points On Third Day Of...
According To A New Study, Patients Are Texting,...
How To Keep Your Digital Media Assets Secure
Home Business Ozan Kabak To Liverpool? The Who And Why Behind The Transfer Story
Business

Ozan Kabak To Liverpool? The Who And Why Behind The Transfer Story 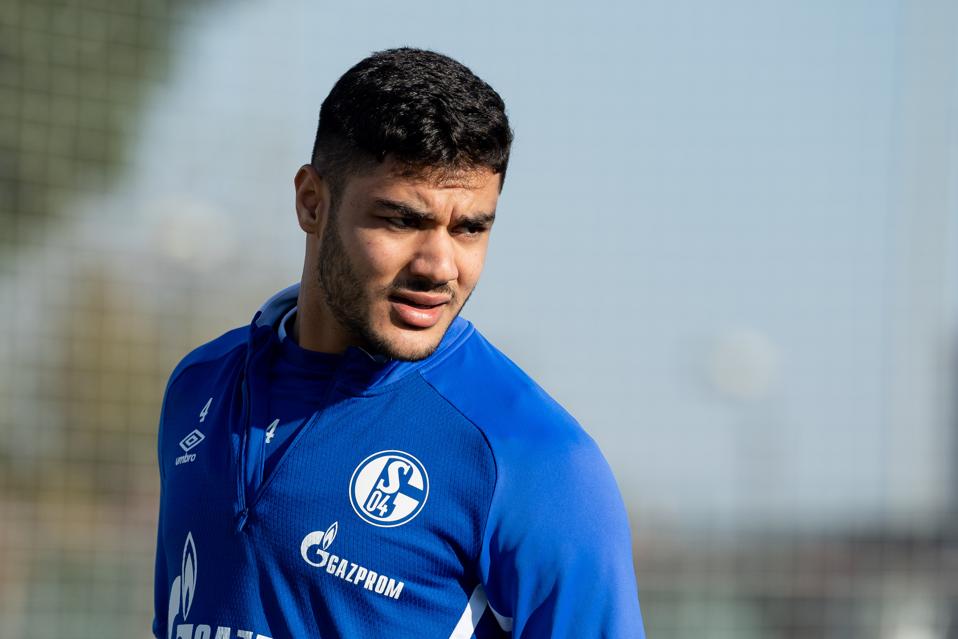 Liverpool have been linked with the transfer of Schalke 04’s Turkish centre-back, Ozan Kabak. German outlet Bild reported that the two clubs have already been in contact regarding a deal which could cost the Reds around $40 million.

Kabak has a release clause of €45 million ($53 million), but this doesn’t come into play until next year, meaning any clubs interested in the defender this summer will be able to negotiate a fee.

This future release clause may be used by Schalke to try to raise that fee but, due to financial problems, the Gelsenkirchen club will be happy to make a profit on the €15 million they paid Stuttgart for the 20-year-old in June 2019. 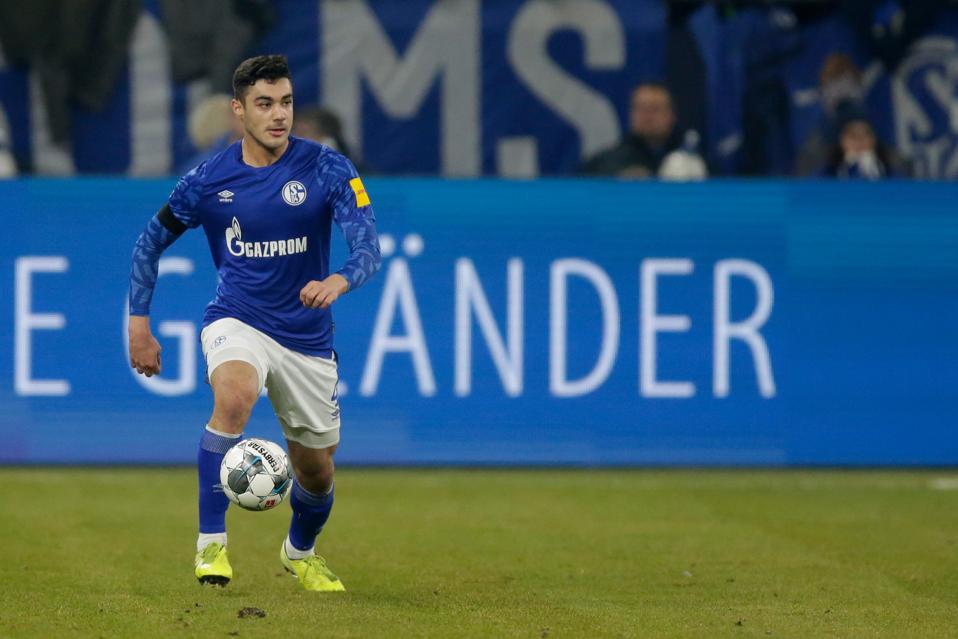 Dejan Lovren’s transfer to Zenit Saint Petersburg means Liverpool will need a new face in the first-team squad at centre-back, and the Premier League champions might be considering a new signing given their manager, Jürgen Klopp, has often spoken about the need for four players in this position.

Kabak, one of the highest-rated young defenders in Europe, would certainly fit the bill given Liverpool’s transfer policy, and is likely to be much more financially viable in this climate than an already established player.

With Lovren gone, Klopp is left with three centre-backs plus Fabinho, and it’s unlikely that the manager, nor the club’s technical staff, will see this as enough.

One solution is to promote from within, but 18-year-old Sepp van den Berg doesn’t yet appear ready to step up and become a regular first-team defender, which would need to happen if there were injuries to senior players. 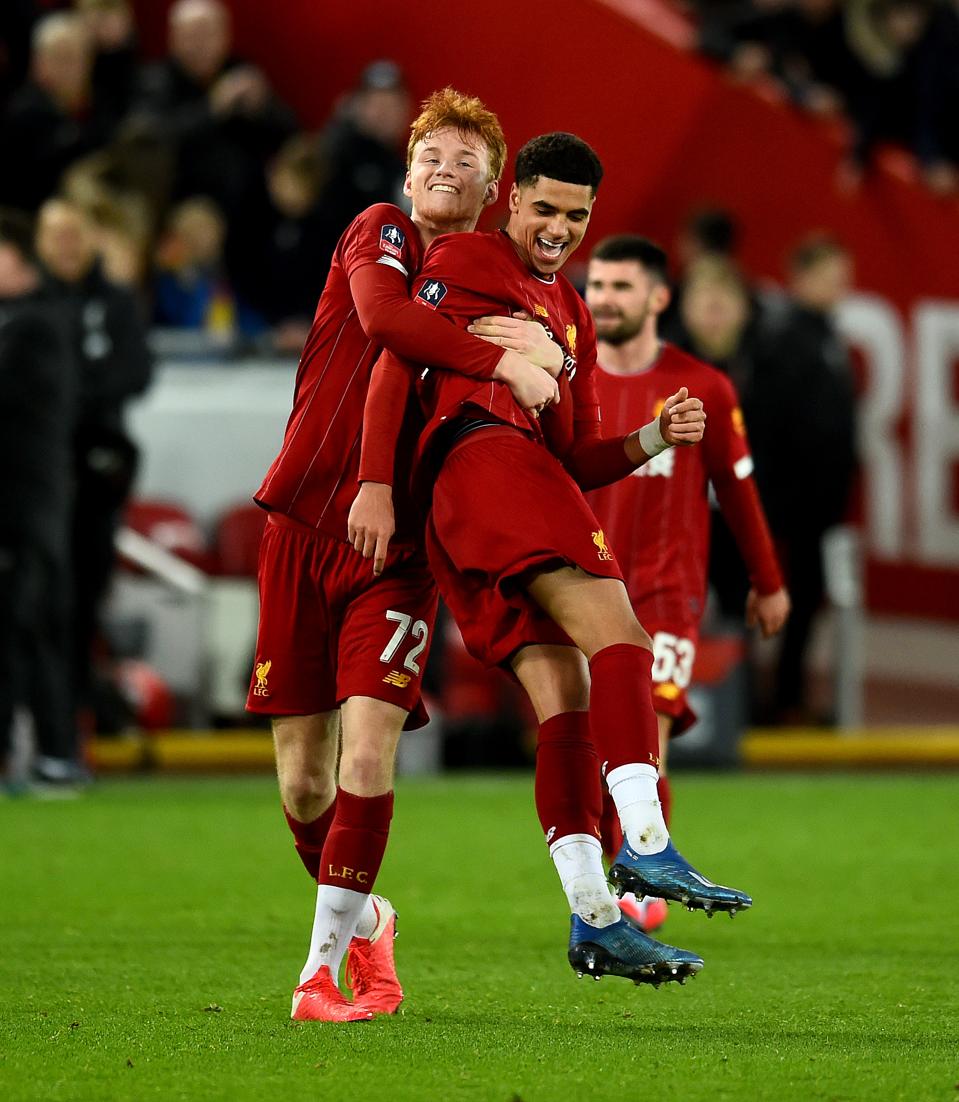 LIVERPOOL, ENGLAND – FEBRUARY 04: (THE SUN OUT, THE SUN ON SUNDAY OUT) Sepp van den Berg and Ki-Jana … [+] Hoever of Liverpool celebrating at the end of the FA Cup Fourth Round Replay match between Liverpool FC and Shrewsbury Town at Anfield on February 04, 2020 in Liverpool, England. (Photo by Andrew Powell/Liverpool FC via Getty Images)

The same could be said about another promising young Dutchman, Ki-Jana Hoever, who might see more first-team chances due to his ability to play right-back as well as in the middle, but at 18 might not be considered ready to take a regular role in the squad.

23-year-old Nathaniel Phillips, meanwhile, has enjoyed a relatively successful stint on loan in the German second division with Stuttgart, but was still in and out of the team, suggesting he isn’t of the required level for Liverpool.

Kabak’s own career in Germany also began at Stuttgart, whom he joined from Turkish giants Galatasaray in January 2019.

Born in Ankara, where his father worked in a prison, but hailing from Derik in the Mardin Province of southeast Turkey, Kabak is highly rated across Europe, not least at his current club who will see him as one of their most valuable assets as they look to escape financial trouble.

Like many rounded defenders, Kabak started out as a striker before dropping back to use his talents in defence. His performances at youth level for both Galatasaray and Turkey soon made scouts from across the continent sit up and take notice, or at least write a little less casually in their notebooks.

He is likely to have been on the radar of clubs such as Liverpool since captaining Turkey at the 2017 UEFA European U17 Championships, and his quick ascent to regularly donning the royal blue of Schalke 04—one of the biggest clubs in Europe, albeit a struggling one—is testament to a strong mentality at a young age. 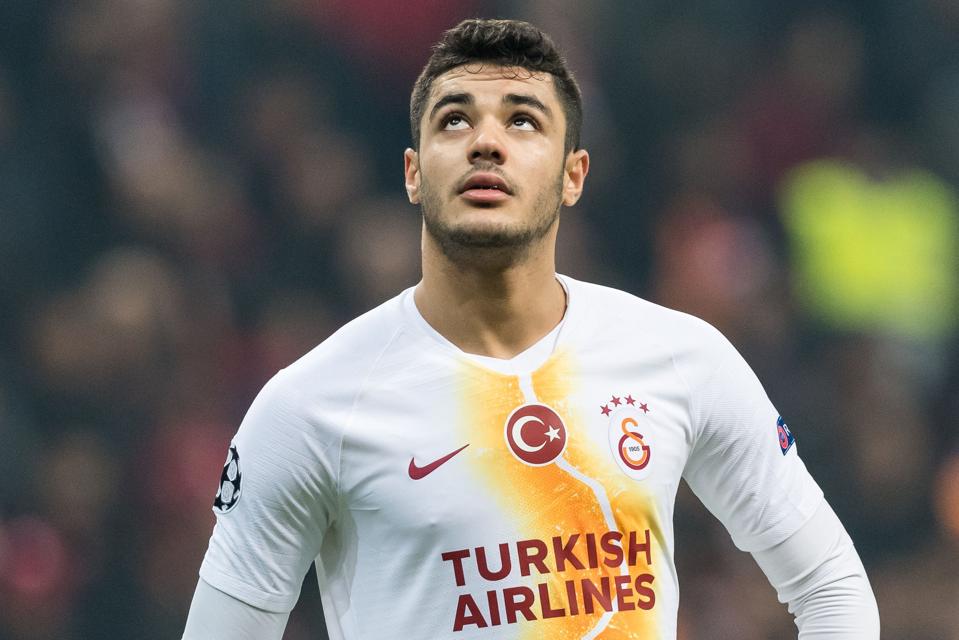 Ozan Kabak of Galatasaray SK during the UEFA Champions League group D match between Galatasaray AS … [+] and FC Porto at Ali Sami Yen Spor Kompleksi on December 11, 2018 in Istanbul, Turkey.(Photo by VI Images via Getty Images)

Kabak has cited the legendary Galatasaray defender Bülent Korkmaz as one of his idols. Korkmaz was nicknamed the ‘Great Captain’ and ‘Warrior’, which gives some indication as to the qualities the youngster is striving to emulate.

“I want to become one of the greats like my idol the legendary Galatasaray captain Bulent Korkmaz,” Kabak told Tam Saha magazine in 2018.

“I want to play for Galatasaray but I have a soft spot for the Premier League and in particular Manchester United.”

As well as the similarities with Korkmaz, Kabak has also been compared to Sergio Ramos by none other than the Bundesliga’s own website, which also reveals that another of his idols is Virgil van Dijk. The popular football database/video-game, Football Manager, has him down as the next Alpay Özalan. All of this paints a picture of a player who is as tough as he is talented.

Though Liverpool are well known for the use of data in their recruitment, their process goes well beyond the numbers. They delve deep into the character and background of any player they think may have what it takes to join Klopp’s collective, and it would be no surprise to hear that Kabak ticks the right boxes.

The most detailed scouting and character report may well have come from Klopp’s close friend, David Wagner, who is head coach at Schalke.

At 6 foot 1, Kabak is slightly taller than Korkmaz, but still has that quickness and football ability that can make smaller defenders stand out, and often be more useful than a taller, more limited figure. These attributes will also be of use when playing in a high defensive line.

The Bundesliga has already released a showcase of his ‘Top 5 Tackles’, and while last-ditch tackles and blocks aren’t necessarily the things you first look for when judging a defender’s quality, they are handy tools to have.

Kabak is right-footed but can tackle with either foot, which can prevent the type of awkward positioning when going into challenges that can lead to fouls.

He averages just one foul per game for Schalke this season and has picked up just four yellow cards in each of the past two seasons, despite playing in busy defences. He is yet to be shown a red card.

He has played the majority of his short professional career to date as a right-sided centre-back, as shown in the graphic below from Smarterscout. Liverpool may see him as a potential partner to the left-sided Van Dijk, rather than as backup to the Dutchman. 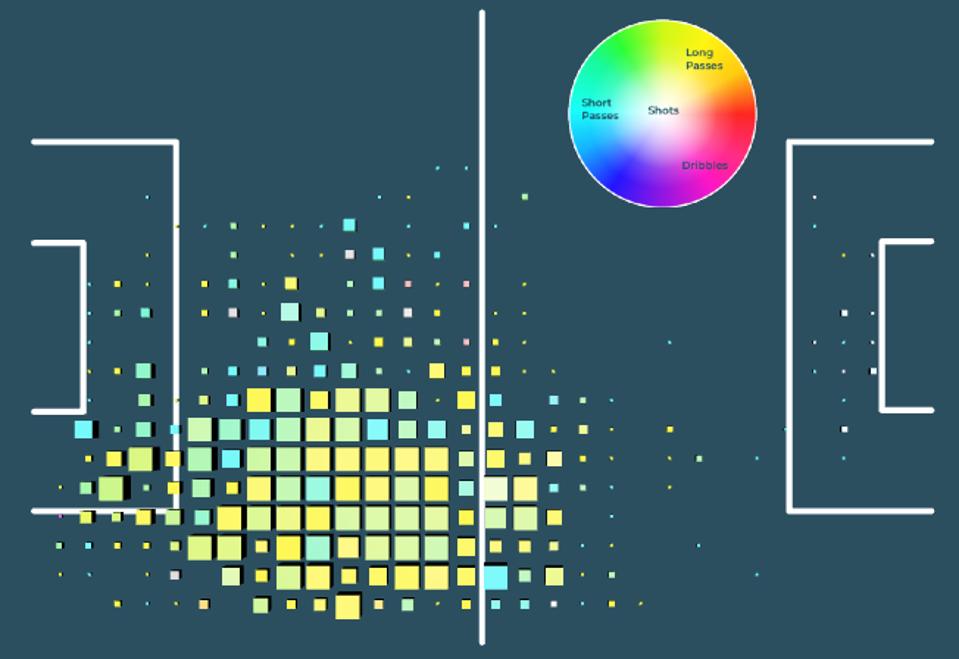 His defending can be dogged, as his nod to Korkmaz indicates, but there is also a range of passing that can belie this, as well as a willingness to take players on and carry the ball out of defence. This will be tested further at Liverpool, but this is an area where the club’s recruitment team will have looked to the data as well as at the player’s technique.

He’s one of the best in the league when it comes to winning defensive duels, and this type of dominance is reflected in the radar below from FootballSlices. Kabak ranks above the 90th percentile for total aerial duels won as well as the percentage of aerial duels won, and also for tackles won.

He is strong in the air and on the ground, which can come in handy in both boxes. So far in his career, he has four goals with his head and two with his left foot. 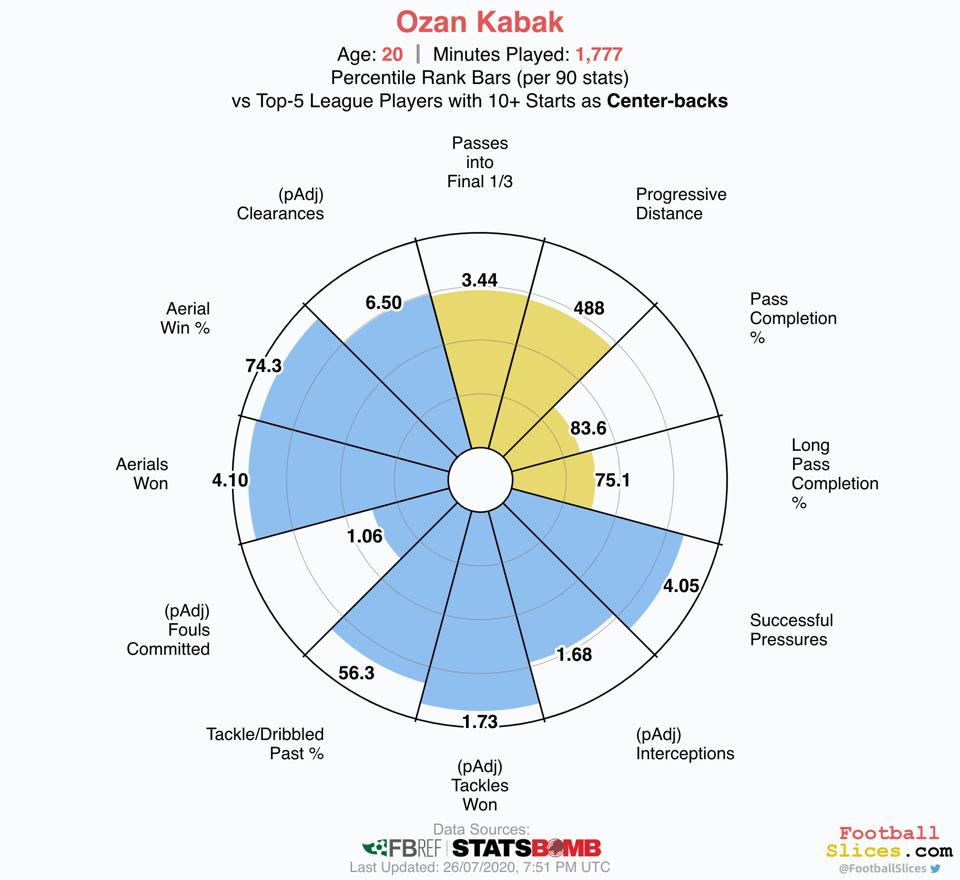 He also shows up well for progressive passing, though this tendency to be proactive and forward-thinking in this area can result in a lower pass completion percentage and occasionally lead to him looking wasteful.

Though the number of duels won would drop in a team such as Liverpool who have much more possession than the likes of Schalke and Stuttgart, his passing stats should rise dramatically.

There is a willingness and ability to progress the ball, as shown by a medium pass (5-25 yards) accuracy of 90%, and a long pass (25+ yards) accuracy of 75% (FBref). Liverpool tend to mix their possession play with a fair few long balls, and Kabak has good aim when hitting upfield.

In terms of reliability, he played all but the final game of the season for Stuttgart after arriving in Germany from Galatasaray midway through the season, and ended up starting a total of 33 games across both clubs in the 2018/19 season—his first in senior football.

During the most recent campaign, he started 21 games, missing four through injury, He is generally reliable and also, perhaps surprisingly for a defender who only turned 20 in March, relied upon.

Kabak is likely to move to a Champions League club sooner or later, and Schalke’s financial situation means they would prefer it to be sooner. On making this move, he would need to adapt to being less active on the defensive side, improve his levels of concentration, and be more considered on the ball, but he has the tools to do so.

Whether this bigger club will be Liverpool remains to be seen, but in a market where the qualities needed to play centre-back at a big club are scarce, Kabak would be worth the gamble for Liverpool, where he would hope to become a regular partner for one of his idols, Van Dijk.

Commerce Enablement Is Key, But We Have No Idea What It Means Yet