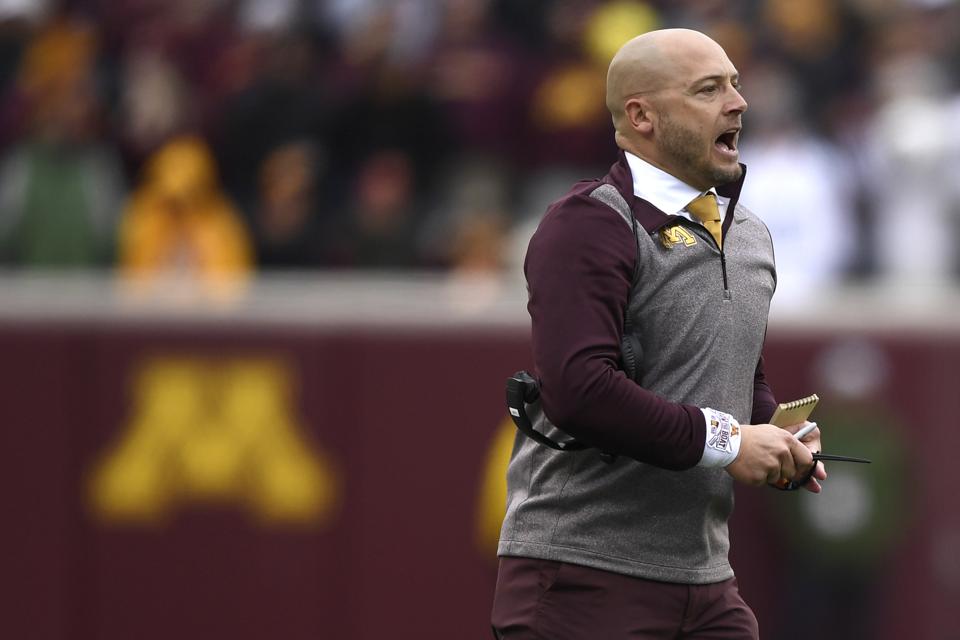 Coach P.J. Fleck led the Minnesota Golden Gophers to an 11-2 season in 2019, which was topped off by … [+] a New Year’s Day bowl win over Auburn. (Photo by Hannah Foslien/Getty Images)

TAMPA — When P.J. Fleck arrived at Minnesota three years ago this month he not only brought his “Row the Boat” mantra with him, but he also endeavored to connect the school’s tradition with his personal life-style philosophy, adopted after his son, Colt, died days following his birth in 2011.

No matter how difficult things got for Fleck, he was determined to keep rowing full steam ahead. No matter how long it has been since the Golden Gophers experienced success on a national scale, he wanted to link Ski-U-Mah, long a part of the school’s athletic tradition, with “Row the Boat.”

While there is unfinished business for Fleck and the Golden Gophers, a New Year’s Day bowl victory over Auburn to cap an 11-2 season represents a restoration point of sorts.

“I think what we are doing is restoring the tradition of old and I think that’s really important to never forget here,” said the 39-year-old coach during an Outback Bowl press conference a few days before his team took the field against the Tigers. “Rowing the boat is our culture. Ski-U-Mah is our tradition and what we are doing is restoring all of that.”

A win against Wisconsin at the end of the regular season would have sent the Golden Gophers to their first Big Ten championship game with a chance to win the conference title for the first time since 1967.

Minnesota lost to the visiting Badgers, but was still invited to only its second New Year’s Day bowl since playing in back-to-back Rose Bowls following the 1960 and 1961 seasons.

That meant plenty to UM fans, who comprised more than half the announced 45,652 at Raymond James Stadium (where Fleck was an assistant in 2012 with the Buccaneers) and who stood in unison on their team’s side of the field chanting “Row the Boat, Row the Boat” as quarterback Tanner Morgan took a knee on the game’s final three snaps.

“I love it when some of the older generation comes up to me and they have tears in their eyes, especially before that last game (against Wisconsin) with the hope of doing what we almost did, of just having those memories that they had 50 years ago come back and be that close to becoming a reality,” said Fleck, who in November signed a seven-year, $33.5 million extension that runs through 2026. “At least a New Year’s Day bowl is a reality for them. I think that’s fun when you are restoring a program. We are really proud of the progress we have made.”

That progress includes the program’s most wins since going 13-0 in 1904, the first of seven national championship seasons with the last coming in 1960.

The victory over No. 9 Auburn marked the program’s highest-ranked win against a non-conference opponent ever. The bowl win also guaranteed a top-25 finish for the first time since 2003 and this season will mark the third time (along with ‘03 and 1999) the Golden Gophers will finish ranked since 1962.

With this having been a landmark season in several ways Minnesota, it is sure nice to get the recognition that goes with it.

“I think that with everybody we played this year, people didn’t respect us,” said senior linebacker Carter Coughlin, who led the team with 9.5 tackles for loss and who played his last game for UM on New Year’s Day. “We were chosen to be sixth in the (Big Ten West Division) this year and we blew that out of the water. I am excited that we finally have a little respect with our name. Next year will be a new team, but those boys are going to be hungrier than ever. Hopefully, the country is starting to realize who the University of Minnesota is.”

The country is starting to realize who Tanner Morgan is. The quarterback, who committed to Western Michigan when Fleck was leading the Broncos to a 13-win season in 2016 and remained committed to Fleck after the coach moved on to UM, completed his redshirt sophomore season by throwing for 278 yards and two touchdowns against the Tigers.

Alas, Morgan’s development as the leader of the offense is about much more than team wins and personal stats.

“’Row the Boat,’ that’s what (Fleck) brought here when he came here and what our team has embodied,” said Morgan, who finished the season ranked fourth nationally in pass efficiency. “It is so much more than just football. It is so much more than wins and losses, Outback Bowl champions or whatever. It is about serving and giving and never giving up on anything you do in your life.”

It is about four areas of life that guide a player’s commitment to personal growth. 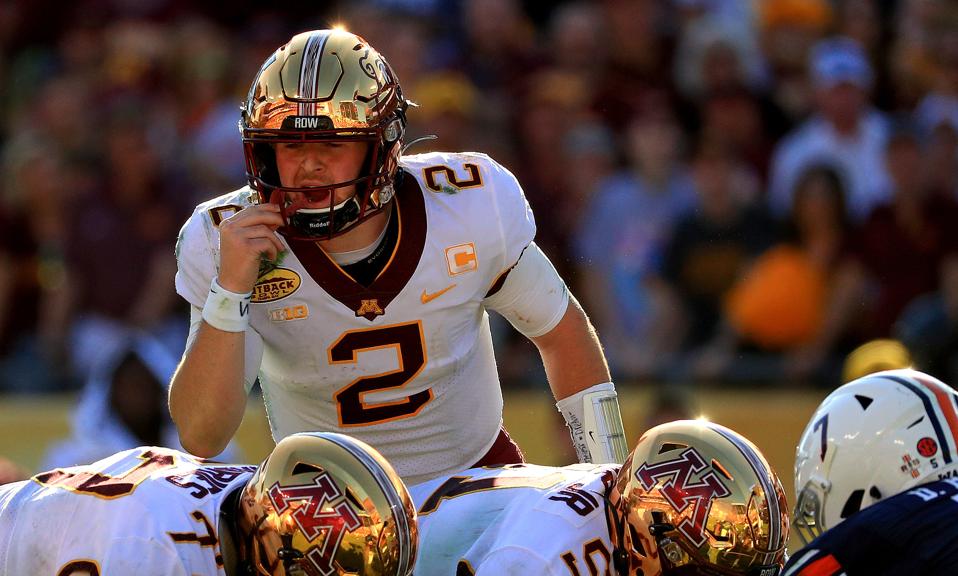 “Academically, athletically, socially and spiritually,” said Carter, in rattling off the quartet of pillars. “This season was a product of all that. Everything matters in this program and when you focus on things like that and everybody has the same vision, then you can (have a season like this). Coach Fleck is going to keep this thing rolling. The teammates I played with and will be back next year are going to keep this thing rolling.”

One of the players who kept rolling against Auburn was running back Mohamed Ibrahim. With help from his offensive line, Ibrahim blasted through a formidable defensive front to the tune of 140 yards (20 carries) during an afternoon in which Minnesota piled up 215 yards on the ground to snap the Tigers’ streak of 15 games of holding an opponent to less than 200.

Ibrahim, who as a freshman in 2018 ran for 1,160 yards while seeing extended playing time due to injuries, was immediately sold on Fleck’s vision for Minnesota football, on and off the field.

“When I met him, I felt like he could change everything,” he said. “I believe in his message and everything he is doing. I have watched the whole thing build from the first year until now and it has been pretty awesome. He helped me grow as a man, and not just with football, but all four areas of my life.”

Tyler Johnson, who capped his career at Minnesota by catching 12 passes for 204 yards and two touchdowns in being named Outback Bowl MVP, likes the state of the program he is leaving.

“Coach Fleck says it all the time, that this program is going up,” said the Golden Gophers’ all-time single-season (1,318) and career (3,305) receiving yardage leader. “As you saw (Wednesday), it’s definitely going in the right direction. Just having the right group of guys in the locker room is very important. Then everybody buying in, making their job very important and being selfless within this program.”

Those are reasons why returning players such as Ibrahim and Morgan and departing players such as Coughlin and tight end Bryce Witham, whose only two receptions this season were in the bowl game and resulted in a touchdown and a critical first down on the game’s final possession, feel what took place during the 2019 season could be the beginning of something special at Minnesota.

Of course, if the Golden Gophers want to keep rowing downstream they must defeat the big boys on their schedule. Knocking off undefeated Penn State at home November 9 and Auburn to celebrate the new year go a long way toward earning the respect Coughlin spoke of.

This season Fleck and his Gophers made some nice strides toward doing just that.

Testicular Cancer Relapse Can Be Prevented Even With Half The Amount Of Chemotherapy, Says New Study

What Are The Standards For Election To The...

How This Startup Is Revolutionizing the Way Students...

History And Housing Discrimination: Why Neighborhoods In The...