Breaking
Here’s What You Need To Know About AstraZeneca’s...
Mini Gifts: What To Get For Your Colleagues...
Report: Biden Picks Janet Yellen For Treasury Secretary
Policy Priorities
Eight Key Steps To Landing Your Product In...
How Much Room Is There For E-Kick Scooter...
Why We Must Update The Law For The...
The Tax Rules For Home Businesses And Working...
How To Use The ‘E.R.I.C.’ Framework To Tackle...
‘Destiny 2: Beyond Light’ Review: A Frozen Triumph
Five Steps To Faster Market Research
What’s The Upside For NetApp Stock?
Why Automated Machine Learning Is Becoming A Must-Have...
Is The Caruso 2020 A Serious Challenger To...
Your Smartphone Is Costing Your Fortune
Ignoring Climate Related Physical And Transition Risks Imperils...
Home General Pandemic-Inspired Sales Of Telescopes Are Surging. Here’s The Naked Truth About Them You Need To Know
General

Pandemic-Inspired Sales Of Telescopes Are Surging. Here’s The Naked Truth About Them You Need To Know 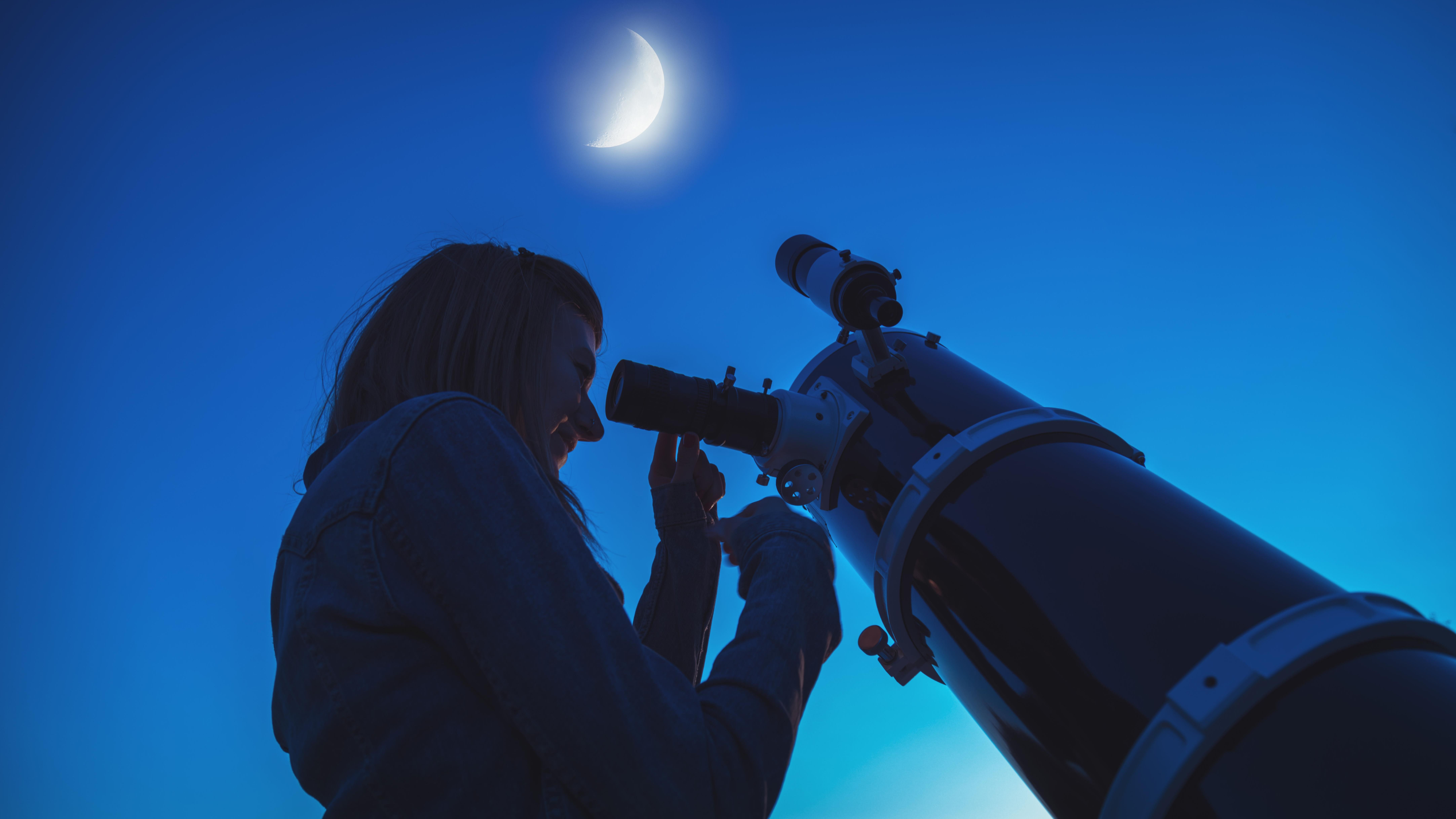 What telescope should I buy? It’s been a much-Googled question this pandemic according to Sky & Telescope, which reports that telescopes are flying off the shelves.

This is great. It means that—as I have suspected since March—there’s been a surge in interest in the night sky during this pandemic.

It’s not surprising that people are investing in telescopes. They’re cheap and, hey if you want to look at the night sky you absolutely need a telescope, right?

You see, telescopes are serious scientific instruments. Buying a telescope as soon as you develop an interest in the night sky is like returning from a zoo all excited about animals and then investing in a microscope to study bacteria.

If you’re new to stargazing and the night sky then a telescope is, in my humble opinion, probably the worst thing you can buy—both for you and particularly for a child showing an interest in the night sky.

Promise me one thing: do not buy a telescope for a kid for Christmas and leave then to figure it out themselves. You need to do your research and know enough about how they work—including, crucially, how to set them up.

Then you need to have a list of 10 things you want to show them a close-up of in the night sky.

MORE FROM FORBESStop Looking For An ‘Earth 2.0,’ Say Scientists As They Detect An Even Better ‘Superhabitable’ WorldBy Jamie Carter

If you don’t take the time to do any of that then by buying a telescope you will likely be turning their excitement into dust (literally since many telescopes sit gathering it).

Some night sky enthusiasts will hate me for saying this, but buying a telescope when you’re starting out can be a huge mistake.

Stargazing and amateur astronomy is all about patience. There is no quick fix to knowing and navigating the night sky. It’s best done slowly—and getting a telescope comes down the road.

So here’s why not to buy a telescope—and what you should really be buying if you’re becoming a stargazer.

1. Telescopes will not give you instant gratification

At the moment you’re wandering into your backyard and looking at the stars. Hopefully you’re beginning to recognise a few constellations. You’ve seen Mars, Jupiter and Saturn this summer, and you fancy a close-up.

That all makes perfect sense, except that telescopes take you away from the night sky and get you involved in technology. A “go-to” telescope might persuade you that it can automatically slew to hundreds of must-see objects without you even knowing the night sky. Firstly, that’s wrong—you need to know your way around the night sky a little to align a telescope. Secondly, if you’re not going to take the time to learn about the night sky yourself, then what are you doing? What’s the point?

Be prepared for a steep learning curve. Before you make a purchase you really do need to know exactly what it is you want to see through a telescope. Then you must learn the differences between reflectors and refractors, Dobsonians and Newtonians. Now consider the merits of mounts: alt-azimuth or equatorial? What about taking photos through a telescope? Can you use your phone with it?

If you’re a stargazer primarily because you’re a nature-lover, all of this is very dull. If you get past all of those questions—and, trust me, you need to if you’re going to get anywhere near the kind of telescope that actually might suit you—you then need to learn how to align it, how to use its various eyepieces, and how to fix problems. If you want learn how to take photos through a telescope, consider that before buying one. Astrophotography through a telescope is an expensive can of worms!

Either way, there’s a good chance that within weeks you—and particularly a child—will have either got completely bored of your new purchase … or become a telescope-gazer instead of a stargazer.

There are three layers of the night sky. The first is the wide-eyed layer you can see with your naked eyes. The second is the stars behind the bright stars, a night sky you can only see with a pair of binoculars. The third is revealed by telescopes. We’re talking far-off star clusters, faint nebula and distant galaxies.

Why rush? Be honest with yourself—have you mastered that first layer yet? If not, avoid buying a telescope—which is nothing less than an advanced scientific instrument—and just take your time getting the most from your own eyes and, if you’re feeling flush, invest in some $50 binoculars.

Seeing Saturn’s rings for the first time through a telescope is a landmark moment. I get that. So too the moons of Jupiter, and the craters of our Moon. At the moment Mars is worth a look, too. All of that can be seen easily from any city.

However, after that you’re into the realms of galaxies, nebula and globular clusters that, frankly, are difficult to observe even under dark skies, let alone in light polluted cities. All require careful observations under specific sky conditions and using various observational techniques.

What’s more, meteor showers actively require you to put away your telescope. So what about stars? Splitting double stars can be fun with a telescope, but stars look like … stars. These are very distant points of light. Your 4-inch telescope isn’t going to bring them much closer.

Telescopes require patience, not only in terms of aligning and setting-up, but also for various seasonal sights to become visible perhaps in many months. Be prepared to use a telescope only occasionally.

For almost all stargazers, binoculars are a much better investment than telescopes.

If you want to investigate the night sky then you don’t need expensive and complicated equipment—just binoculars. A pair of 7×50 or 10×50 binoculars will give you as good a view as an entry-level telescope of anything in the night sky. They’re practically point-and-shoot. Sure, they can be wobbly but there are ways around that. Some can be mounted on a tripod. If yours can’t, lean against a wall to steady your body and bring your elbows into your chest.

That done, you’ll see Jupiter and its moons, beautiful star clusters and distant galaxies through binoculars. Point them at the Pleiades and scan the star-studded sky around Perseus and Cassiopeia. It’s an exquisite view of the night sky that’s only open to those using binoculars—a telescope looks right through this stuff.

Just as importantly, you can put a pair of binoculars in your car and use them anywhere you come across a clear, dark sky. You’ll use them more than a telescope and you’ll get to know the night sky much faster.

Of course, I’m exaggerating about why you shouldn’t buy a telescope. After a period of time spent learning the night sky, the wise stargazer does have a telescope of some kind in their tool-kit, but knows when to set it up and when to leave it inside.

So go buy a telescope, but be really honest with yourself—it’s for occasional use. If you live in a city it’s fun to use a small telescope to look at the Moon and planets. If you live under much darker skies perhaps you can work up to a large telescope for finding galaxies.

However, for everyday stargazing, your own wide eyes are the best instrument you’ve got. If you ever want a close-up, just grab a pair of binoculars.

The night sky can be navigated and it can be known, but it takes a while, so take it slowly.